I was given the opportunity to review the game Zoopanic from Endless Games with my girls. I have to say- what a great concept. When I saw the picture on Endless Games website I thought it looked like it would be a blast. The zookeeper is in a panic. The animals are in the wrong cages because they got loose. I love how bright and full of energy the cover of the box is. Doesn't this look like it will be a fun game to play? The gameboard represents the zoo. It was bigger than I was picturing it, which was great.  The game comes with four zookeeper pieces, two truck pieces, 22 animal cards, 22 trophy cards and a die. 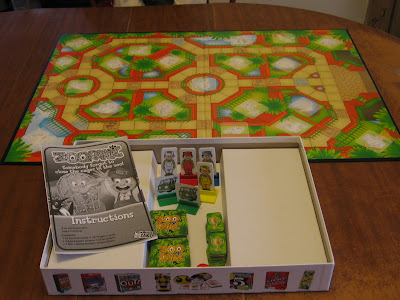 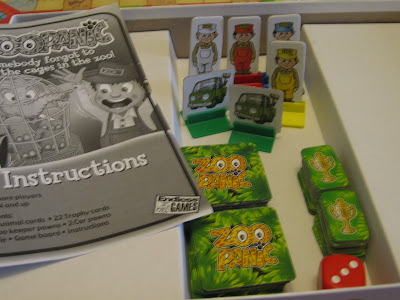 The instructions were clear and easy to follow. (As long as you don't skip a line or two. I skipped one critical line at first and couldn't figure out how we were supposed to do something. After rereading more carefully, I completely understood.)
The girls were very excited to play it the first time. They keep asking to play it again, so these pictures are actually of the second time we played. 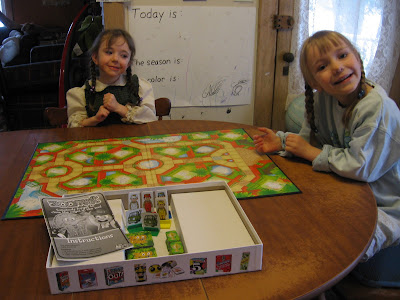 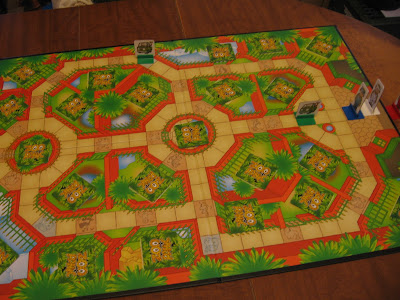 I love the simplicity of this game. The website says the game is for ages 3 and up, though the box says it is for ages 4 and up. Technically Amelia is 3.5 yrs old and she loves it.  There is no reading required to play the game. The child does need to be able to count the dots on a single die or have a parent help. Both my girls are able to count one to one, so it is perfect. If your child isn't counting one to one yet, this is a perfect opportunity to practice.
To set up the game the animal cards are placed face down on the board covering the animal spaces randomly. 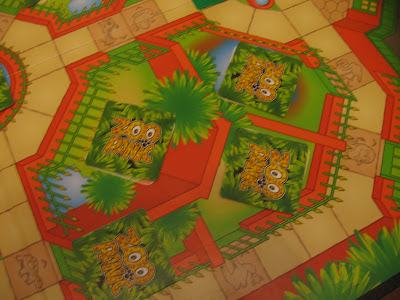 Then the truck pawns are places on two of four truck spaces. The youngest child is supposed to play first. We did this the first time and then Tabitha got to play first the second time, to keep it fair. You can enter the board from one of 5 spaces. The children just pick one randomly, but I am trying to explain to them once you roll the die, you can figure out which space you want to start on to make sure you land on an animal space.
The object of the game is to get all the animals back in their correct cages. You do this by first landing on a brown animal space and picking up the card in the cage.  This is the animal that you are finding the correct cage for. The girls love hunting on the board to see where they have to go to return the animal. 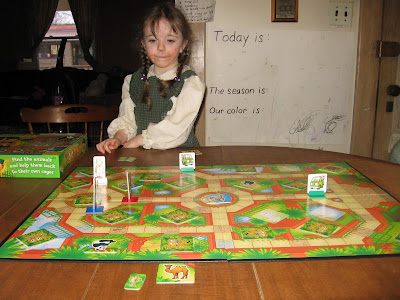 Once you figure out where the animal belongs, you need to figure out the quickest way to that animal's cage. I felt this was a great educational opportunity. Along the way, if you happen to land on a truck space with a truck pawn on it you get to use the truck until you deliver the animal currently in your care to its cage. The truck helps you move faster, you get to move double the number rolled. Another great educational opportunity. We counted the number of dots on the die twice and then counted the total number. Once you return the animal to its cage you get a trophy! Then you either take the card that was already in that cage and flip it over to find out your new animal to find a home for, or, if the card has already been removed and is in another player's care, you roll the die and make your way to a different cage to pick up an animal. The game is over when all the animals have been returned successfully to their correct cages. The winner is the one who has the most trophies, representing the most animals returned.
I loved the educational opportunities in this game:
Figuring out which is the fastest route to a certain space.
One on one counting.
Learning the different animals.
Doubling numbers.
Matching the animal cards to the animal spaces. (I love that once you put the colorful animal card on the blue and white animal space it completes the picture. Reminds me of a puzzle.)
We also used it as an opportunity to work on our manners. Remembering to pass the die to the next player, or asking politely for the die if the previous player forgot.
Here is what the children liked about the game.
Tabitha: I like the part where I get to put the animals in their cages.
Amelia: I liked that they got in the wrong cages at night.

Here is what they didn't like:
Tabitha: I didn't like when they were being stubborn.
Amelia: Where I didn't get to win the whole game.
She also started getting tired of it. I say this because I am under the assumption that you have to roll the exact number to reach the space to return the animal to its cage. This is what the instructions say, "An animal can be returned to the correct cage only when the player lands on the brown animal space outside the cage." To me that meant an exact count. Let's say you need a 2 and roll a six. This can work because we would pace back and forth in front of the gate until you reach the number. But if you need a 2 and you keep rolling an odd number you are never going to get in. This is what we are calling "being stubborn." Which was sort of fun, but it made the game last a long time. So, we modified it a bit. The second time we played I made the rule that you didn't need the exact number to return the animal to its cage. The game went much faster.

All in all, a great game, lots of fun and action with bonus educational activities.
You can purchase this game by visiting the Endless Games website, it sells for $21.99. While you are there, check out all the different games, puzzles and animals they carry. You can also visit them on Facebook and Twitter.

Here's the great news. Endless Games sent me two copies of the game. One to review and one to giveaway to one of my readers.   All you need to do is enter on the Rafflecopter form below.