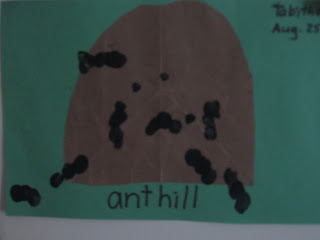 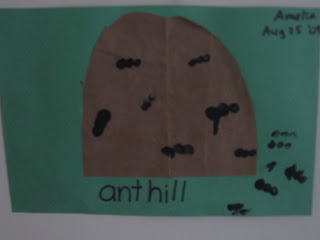 We did our Aa lessons last week, even Amelia had fun. We are just reviewing right now. We had done letters A-L from January '09 through June '09, but we sort of took a break over the summer. Originally the lessons for each letter were spread out over a one to two week period. We did a lot more than just the art projects. We read books and poems suggested at the letteroftheweek.com website. We made a poster to hang up the letter of the week and printed out 6 pictures per letter. 2 copies each. One of the copies were for the poster (I used velcro to stick everything on), the other were for flashcards. Picture on one side, word on the other. We also tried to incorporate some classical music if a composer was available for the letter/sound. The art projects I came up with were of my own creation, not suggested by the letter of the week website.

Anyway, while we review Aa-Ll we will look over the word cards, read the poem if I had one and do one or two art projects. So, now on to Aa.

The girls are very fascinated by the ant hills we have in our parking spots. So for Aa I cut an ant hill out of brown paper, glued it to green paper (for grass) and used black paint for ants. The girls used their index fingers (with mom's help) to count 3 body parts for each ant. As you will see I like to incorporate counting whenever I can.

While we reviewed our word cards we also learned the signs for each word. Here is the list of words I chose to use for Aa: ant, astronaut, acrobat, alligator, ambulance and apple. I sounded out the word while running my finger under the letters. Then we looked at the picture and made the signs. I layed the cards out on the table picture side up. Then as I silently made the signs Tabitha found the correct card.

Posted by kewkew at 1:03 PM No comments: