Welcome to another Back to Preschool Giveaway Blast Sponsor Spotlight in anticipation of the giveaway which starts on August 8th. Please note, that there has been a change in the dates for this event. We were without power for three days due to severe storms blowing through our area last Thursday, so I have to play catch up on a lot of things.
(If you would like more information on this event click here.)

From the website:
"Endless Games specializes in games that offer classic entertainment and hours of fun at affordable prices.
The general principle of Endless Games is to produce high quality entertainment in board games and puzzles that are quick and easy to learn, but offer “Endless” play value. This theme runs through the line of classic games like Kismet, Spill & Spell, and the Tickle Bee as well as home versions of iconic TV game shows like Password, The Family Feud, and the Newlywed Game. Newer, cutting edge games like X-ceter-O, and Dueling Dice, and party games Name 5, and Flippin’ Out! also maintain this model for instantly addictive fun! From ages 3 to 103, Endless Games offers card games, dice games, party games, word games, strategy games, trivia games, survey games, and pop culture games for everyong [sic]"
In the spirit of my Back to Preschool Blast Giveaway I had asked if I could review their A Bee C Match Game.
Here is a little information about the game from their site.
" A BEE C, Matching Game is a fast-paced letter matching game for all ages. You don’t need to know how to spell to play and you don’t need to be a spelling bee champ to win. Simply match letter to letter and collect 7 cards to win. "
The game comes stored in a Bee Shaped Carrying case which is also used as dice cups. 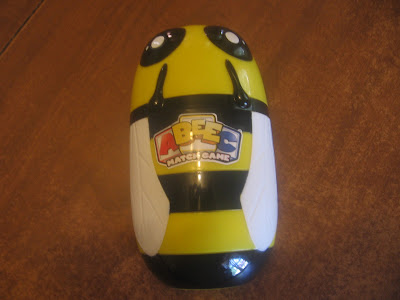 The two sided word/image cards, 22 letter dice and instructions fit nicely inside.
I think this is an ingenious idea as there are no cardboard boxes to bend and rip. 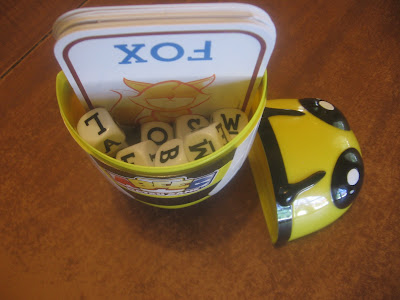 This game is very simple to learn to play.
You can play in with 2 players or 2 teams of two.
To set up both players/teams get 11 dice and 3 of the cards are placed in the middle of the table or floor, wherever you are playing. 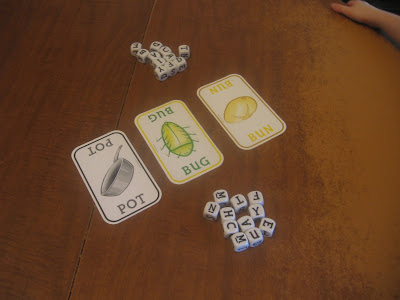 In order to see who plays first each player (or one player from each team) rolls a single die. Whoever rolls a letter closest to the beginning of the alphabet goes first. (Right there is a great educational opportunity.)
The players take turns placing their dice in the bee cup and rolling them. 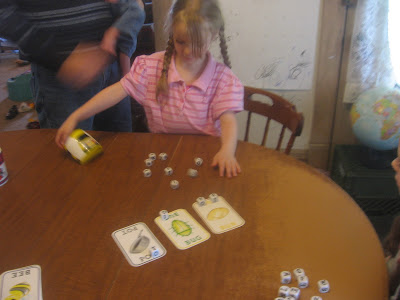 The players then match as many dice to the cards as possible.
With younger children this is a great opportunity for letter recognition.
I would go one card at a time and ask "Do we have a 'b,' do we have a 'u,' do we have an 'n,' etc."
Once all the letters that can be matched are matched the next player takes a turn.
If a word is completed the team that completes the card gets to keep the card and all the dice on the card.
In order for the card to be claimed I think it is a good idea to have the child read the word. I try very hard not to say the word as we play as I would like them to sound it out for themselves (if it can be sounded out, if not the picture clue will help). 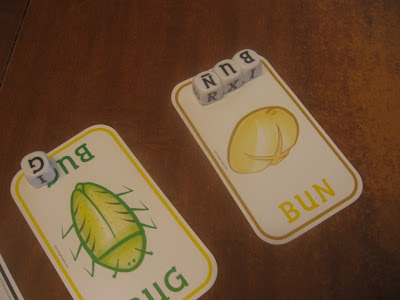 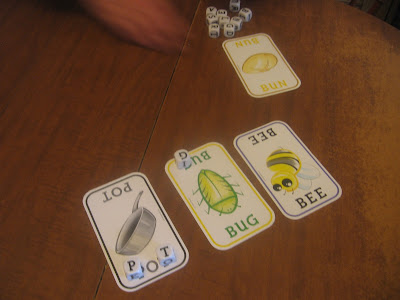 Every time a word is completed and the card claimed a new card is added to the middle of the play area.  Play continues until one team wins 7 cards and is declared the winner.
Poor Hannah was a little young for this game, so we let her have the smaller bee dice cup and a couple of cards to play with. 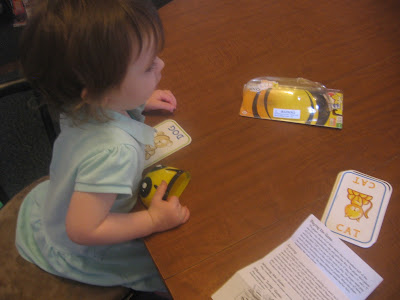 This didn't keep her content for long. She wanted to play with the dice too. So, I found her a couple of regular dice to play with. Next time I think I will grab a couple of  Boggle dice and help her match letters too. Or, maybe Tabitha and Amelia will be a team while I help Hannah. She is only two, but she IS starting to recognize some letters. 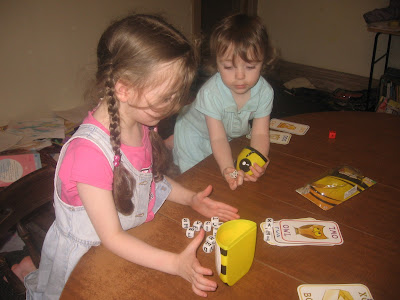 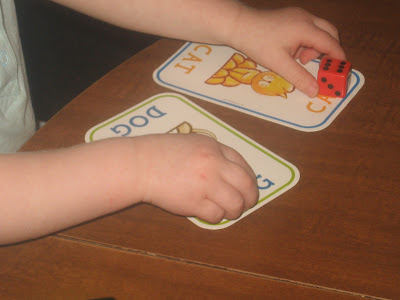 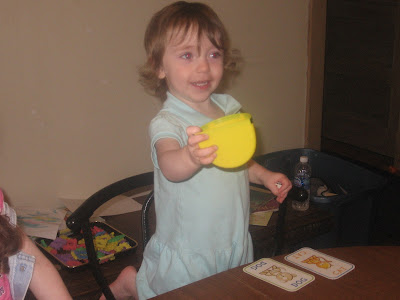 I love the educational aspects of this game. There is letter recognition and  the opportunity to sound out words. Children need to use their visual discrimination skills to distinguish between letters and recognize letters upside down and sideways. And children also have a chance to learn to take turns and wait patiently.
A few things to note.
For younger children this game is not really "fast paced." I am sure for older children (children who recognize their letters quickly) that would be the case. However, even for older children there may be a time when they get frustrated because they continue to roll dice but have no matches. In addition, if one team wins most of the other team's dice it becomes near impossible for the other team to complete words.
And another thing that might cause confusion is the words being on both sides of the card. At first we thought we had to complete the entire word on our side of the card. An oops on our part for not fully reading the instructions. However, while playing the game you need to make sure to be checking for already placed letters.
Still, this game provides a great deal of fun (especially shaking the dice in the cup, that's always fun, though loud so I would suggest limiting children to a few shakes), is educational, and is great for a wide age range. Even though it is recommended for children 5 and up I would say even a 3 or 4 year old can play this game as it is a great way to learn to recognize letters.
I highly recommend this game.
You can check out this game and all their other games at endlessgames.com. You can also view the instructions to their games on their site. In addition, you can check them out on Facebook.
Endless Games has agreed to provide the winner of the Back to Preschool Blast Giveaway a copy of  A Bee C Match Game.  This will be included in the Grand Prize Pack that is worth over $300.
How would you like some extra entries into the Back to Preschool Blast before it even starts?
Either way, don't forget to stop back between August 8th and 25th to enter the giveaway.