Battling it Out with Battle Sheep {A Back to School Review}

It's no secret we enjoy fun games in our household. In this day and age of technology, it is imperative that families learn to have fun together. Playing games is a wonderful way to have together time in a family. As the mom in a game-loving family, I was glad that I discovered Blue Orange Games a couple of years ago during my Back to Preschool Blast Giveaway. Now, the generous people from Blue Orange games have again agreed to join with me to bring you some fun for my Back to School/5 Year Blogiversary Celebration. This year, I get to share 2 of their new games: Battle Sheep and Spot it! Splash. I will be sharing Spot it! Splash in a separate review. For now, I would like to focus on the intriguing game of strategy, Battle Sheep! 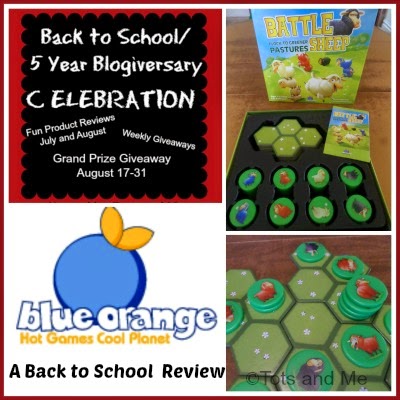 Blue Orange Games was founded 14 years ago by Julien Mayot and Thierry Denoual. Their first game was sold out of a jeep on a 3-month road trip, and from there the company began to expand and grow.  In these 14 years, they have sold millions of games, won over 200 awards, and have added over 50 games to their catalog.  I love not only the vision of this company, to "bring back classic games that inspire people to spend time, face to face, with those who matter most – our family and friends," but the ideals that they espouse.  From the Blue Orange website, these ideals are:

" Choosing durable, feel-good materials, we pledge to produce games that last through generations and create cherished moments.
Designed to be easy to learn and to build upon important skills, our games invite families to unplug for hours of good old-fashioned fun.

Respect for the environment is a priority and we are committed to planting two trees for each one used to create our wooden games."

Now, let me share one of the great games from their repertoire with you. 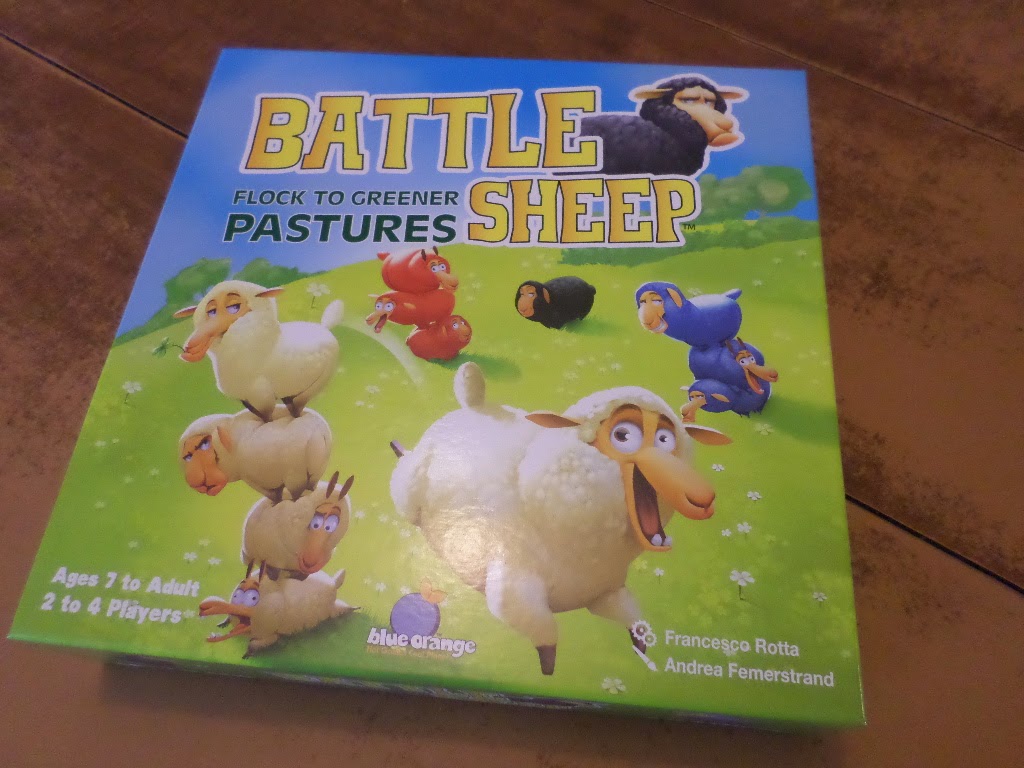 Battle Sheep comes with 16 Pasture Tiles, 64 Sheep Chips (16 of each color sheep), and the instructions. The game is suitable for ages 7 to adult, though Amelia and Hannah have both been able to play along. The game is meant to be played by 2-4 players. 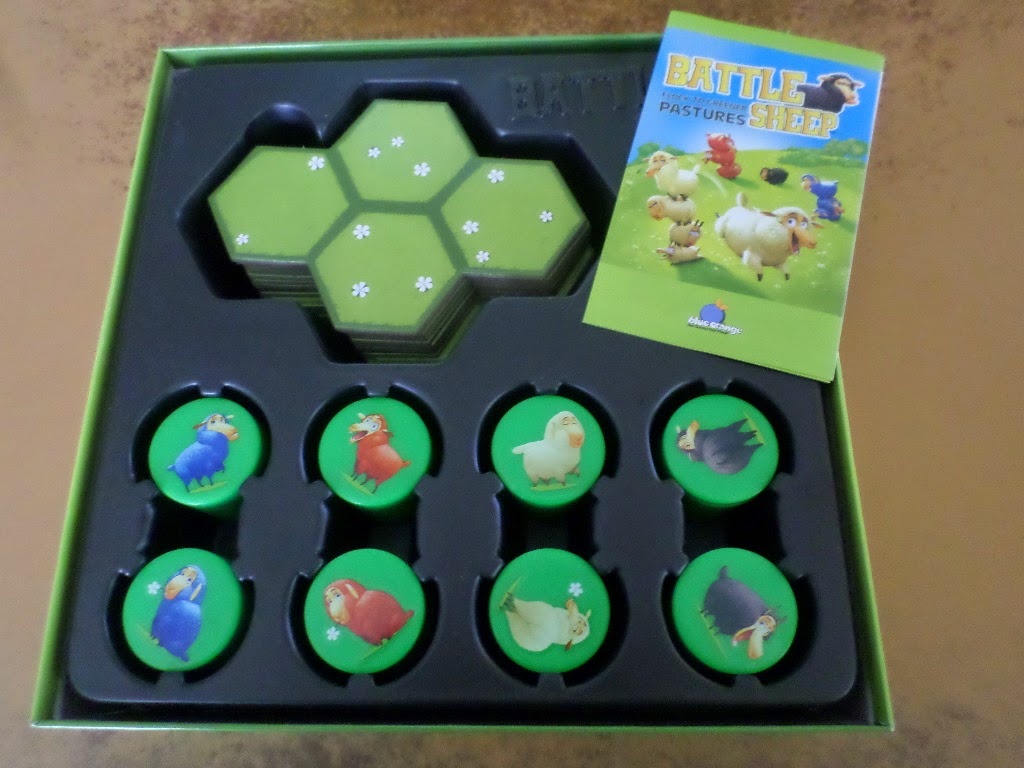 The chips are made from durable, thick plastic and have these really cute pictures of sheep in different poses with varied expressions. They store very nicely in the slotted compartment of the box, along with the pasture tiles. 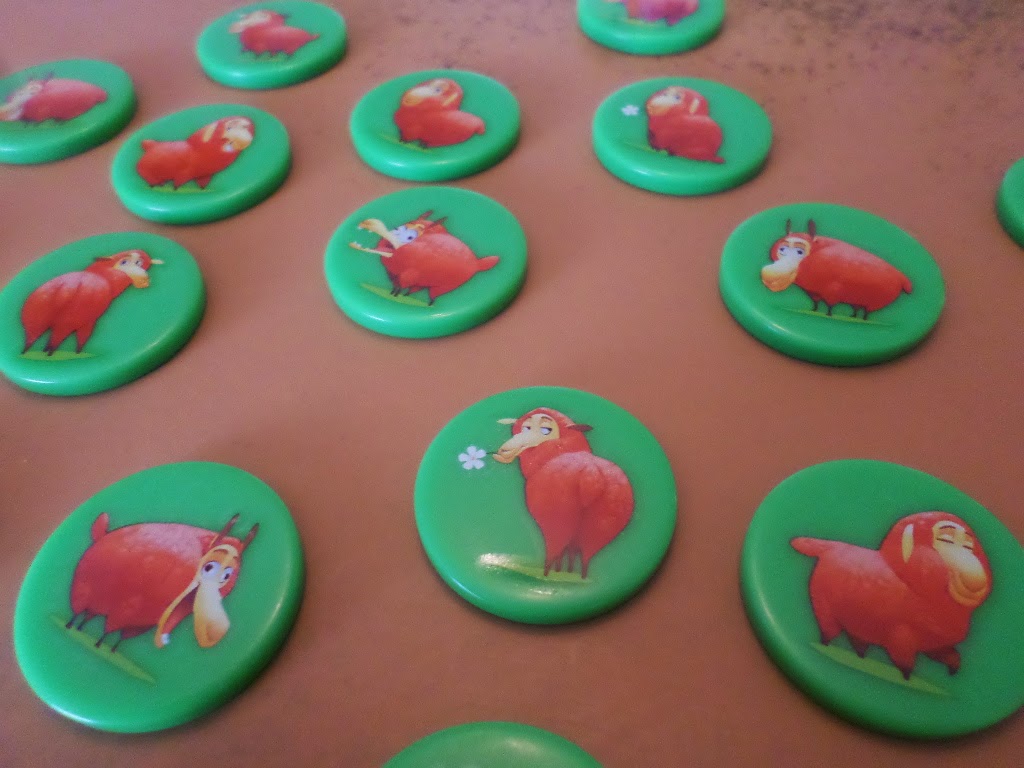 The object of the game is to have your sheep occupy the most pastures.

Each pasture tile is the same shape, a combination of 4 hexagons. To play the game, the players first have to build the pasture.  Each player is given 4 pasture boards. They then take turns arranging them into a big pasture, making sure at least one side of the board touches another. 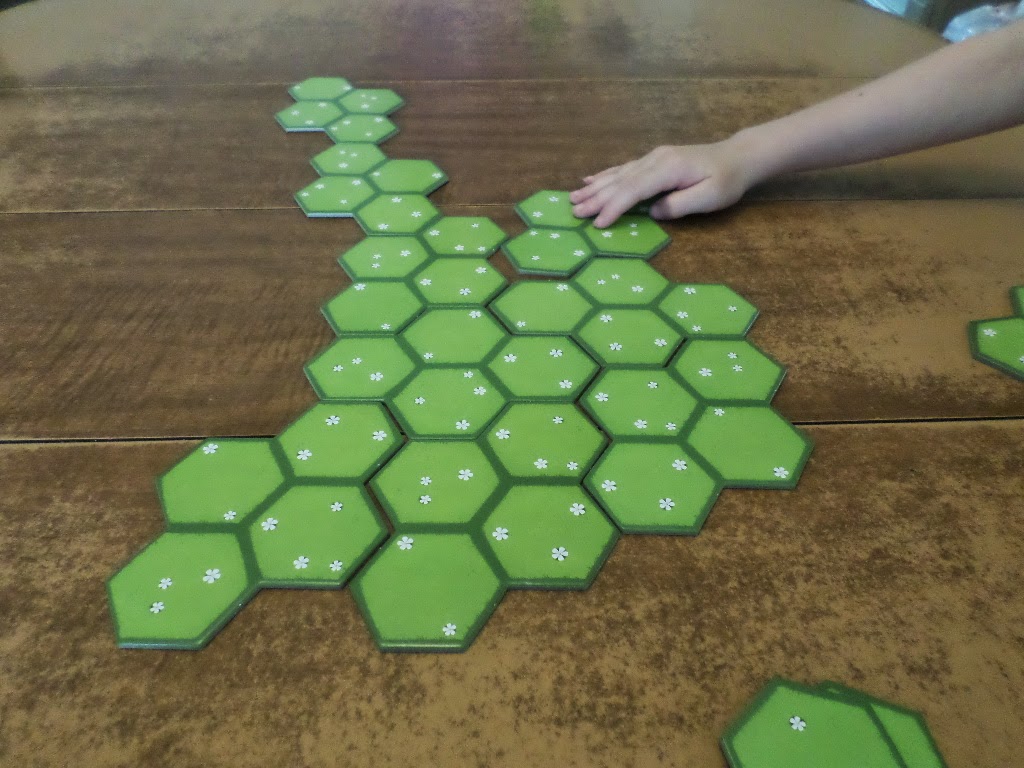 Here is a pasture all ready for play. 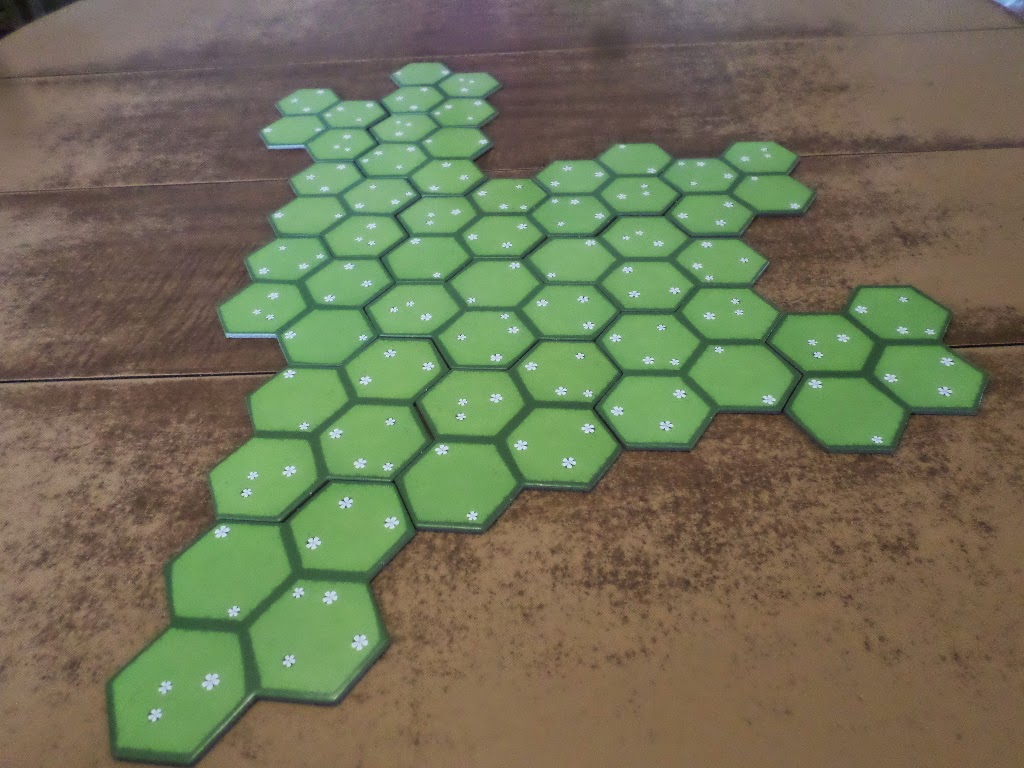 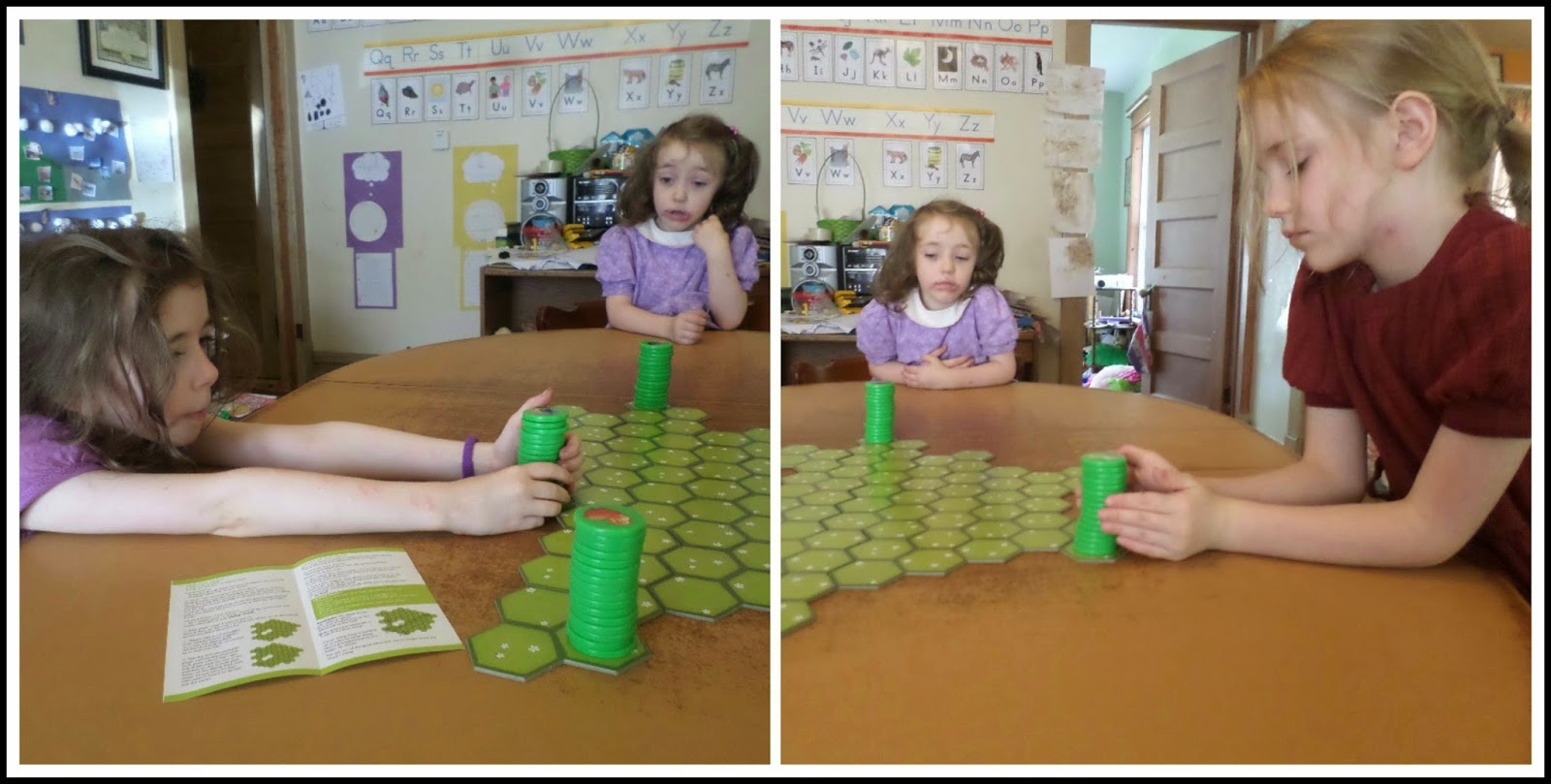 To play the game, a player is to divide their stack into two stacks and move this stack to a new pasture while leaving at least one sheep chip behind to claim that pasture. The new stack has to be taken as far as it can go in a straight line. You can not jump over another sheep stack or land on another sheep stack. Your new stack will either end up on the perimeter or next to the other sheep stack.

As you can see by the example from the instructions, there is usually more than one path the sheep can take. 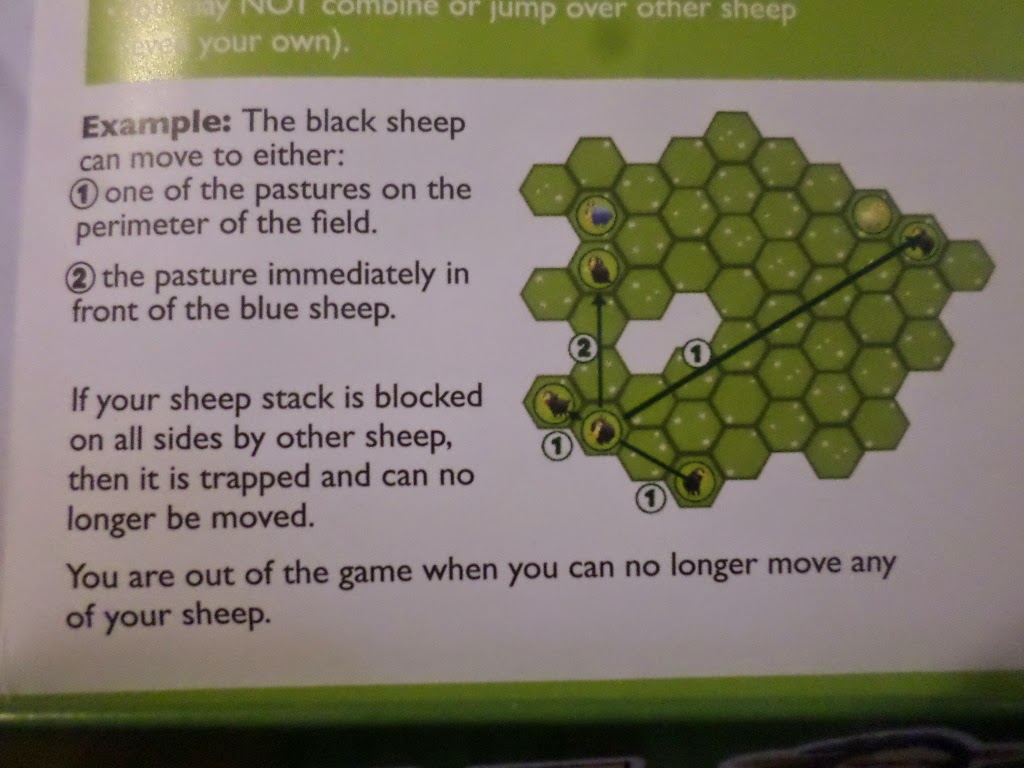 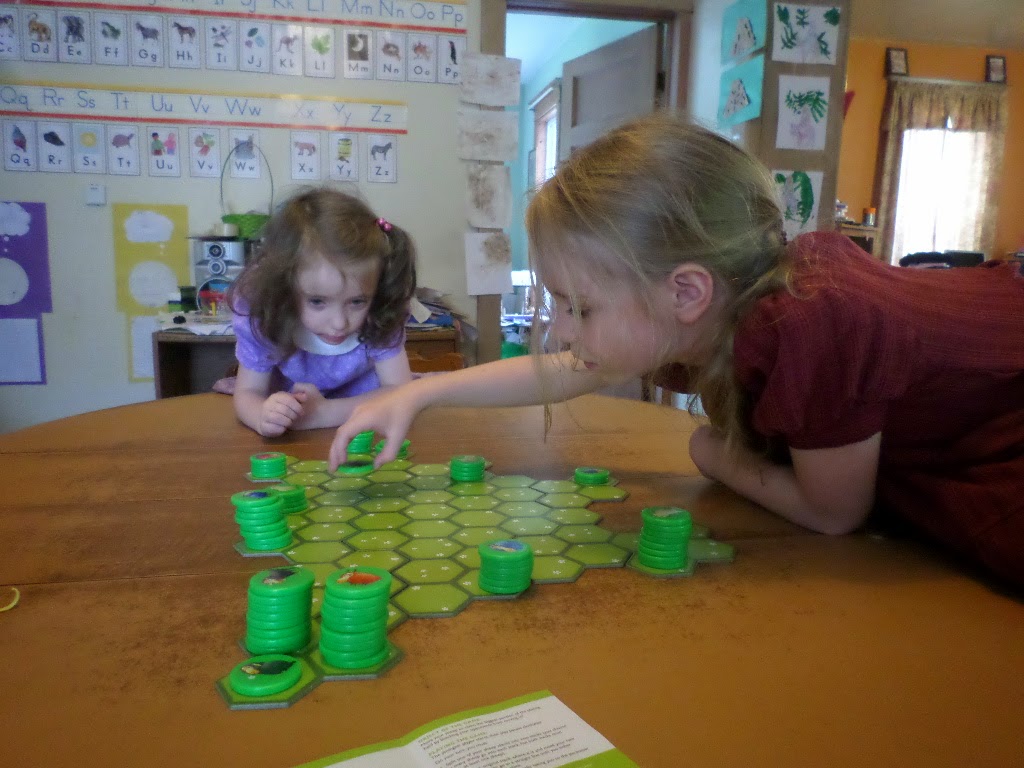 As you play, you want to make sure to pay attention to the sheep stacks around you. If you aren't paying attention, you may end up with a stack of sheep blocked from moving, thus hurting your chances of gaining the most pastures. As you can see in the picture below, this poor sheep stack has no where to go. 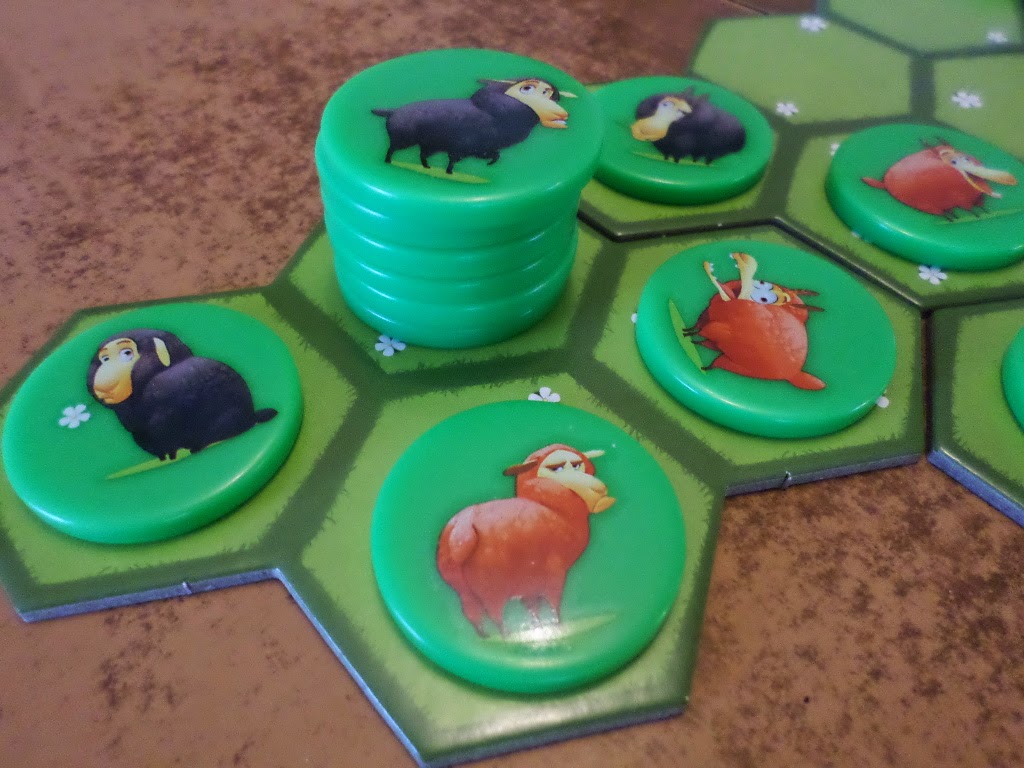 This is where the strategy comes in. You need to pay attention to how many possible pastures you may be able to win in each section and leave behind enough to grab them on your following turns, but you need to see where the other players stacks are to make sure they are not going to end up blocking you. Sometimes the best bet is to take all but the one. Other times, you want to leave behind several so you can claim the surrounding pastures.

As you can see in the next picture, even though my stacks are blocked in, they will be the only ones to be able to claim these pastures. 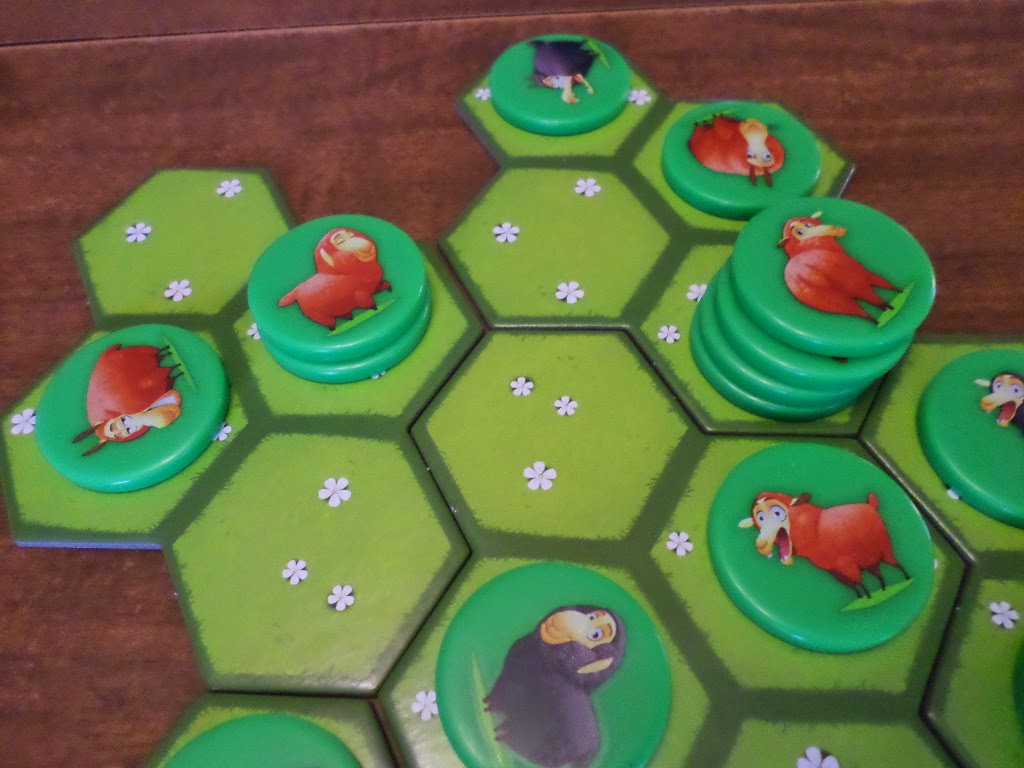 Here is a finished game. None of the stacks can move any further. 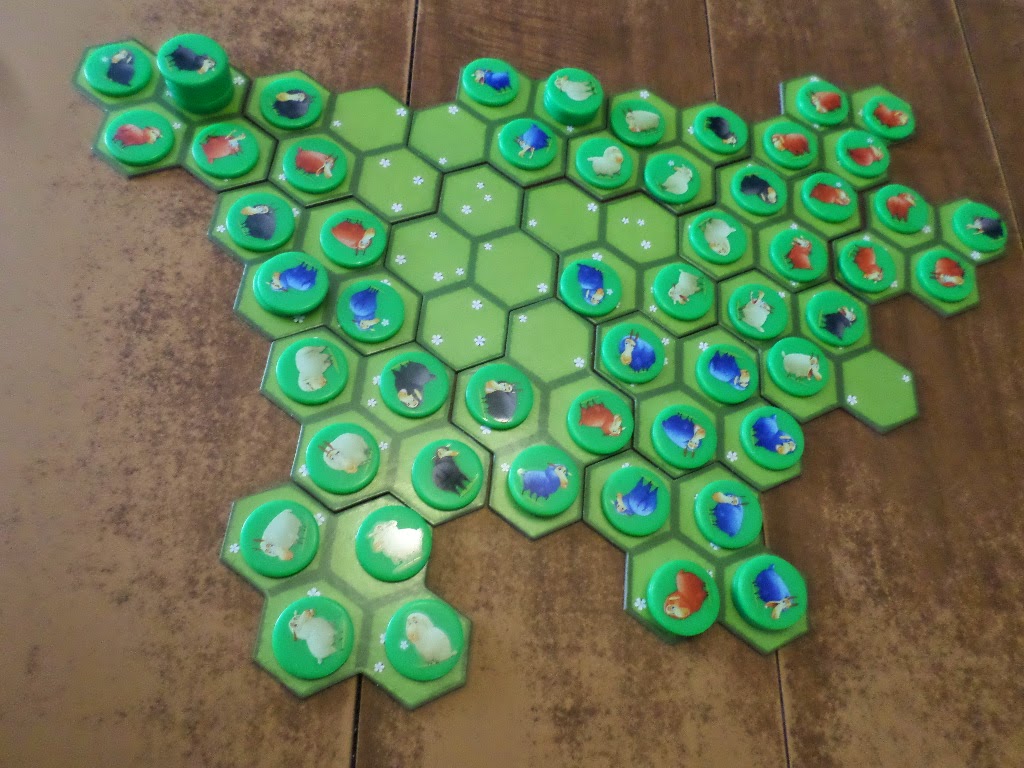 The winner is the one who has their sheep claiming the most pastures.


One of the things I love about this game, is that the game is never going to be the same. Each time you play, the board gets a new configuration. The children also learned that they can leave "ponds" in their pasture by leaving holes. 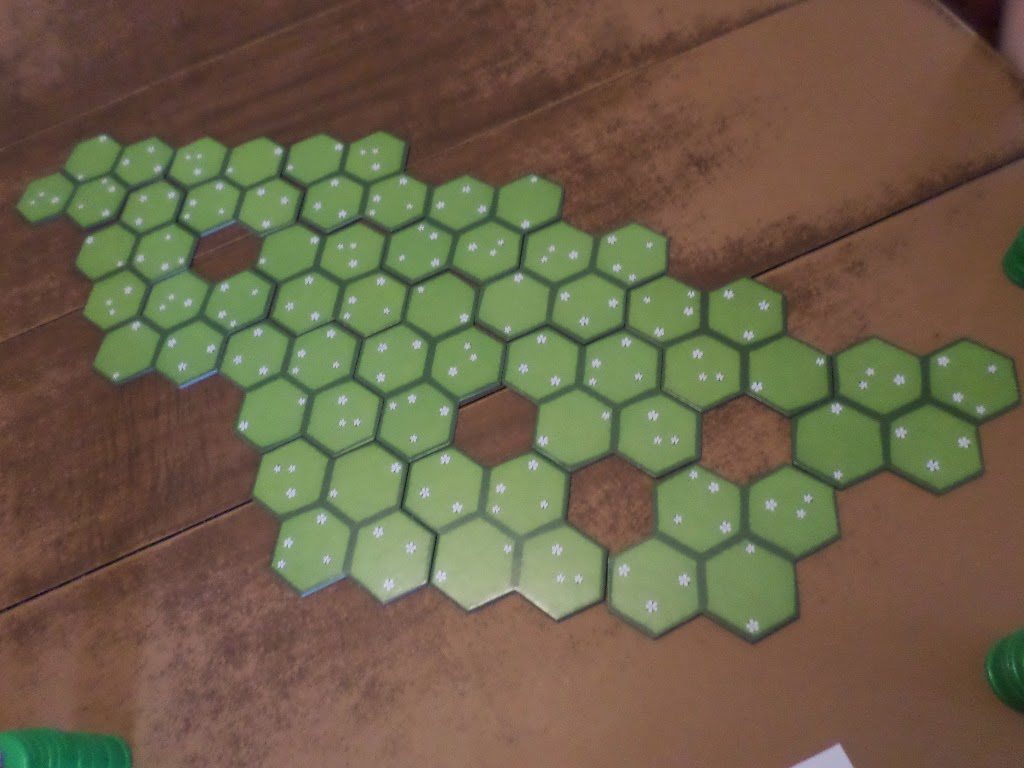 I am really impressed by the quality of the game. The Pasture Boards and the Sheep Chips are thick and durable. At first glance, it looks like the sheep are just stickers on the green chips. However, that is not the case. The sheep images are a part of the chip and do not look like they are going to be able to wear off, they definitely can not be pulled off by curious younger siblings. The Pasture Boards are also sturdy; they are not easily bent and are going to stand up to a beating, which is great in this house with little children.

This is such a unique game of strategy. Able to be played by younger children, but intriguing enough for adults to play as well. Hannah is only 4, but she was able to play along, though some help from daddy probably would have been appreciated. Not only are children developing skills in strategy, but they are learning to focus and pay attention. The game also helps to improve abstract thinking.

Daddy's thoughts: "I love the strategy involved and getting to spend time with my kids."

Tabitha "I liked trapping the other player's sheep and it's fun because you get to play with family and friends. It's also fun because there's 4 different colors of sheep which are red, black, blue, and white."

Amelia isn't quite as fond of the game because she always loses.  Granted, she isn't quite at the age recommendation and she does tend to get very upset when she loses. We are working on that, helping her learn to not be a sore loser. I was very bad as a young child, to the extent my mother stopped playing certain games with me. I think it is very important to teach a child to be a gracious loser, to realize they can play without always winning. Though I can see the frustration if one always loses.

Once again Blue Orange Games has produced a winning game! You can check out all the products they offer at their website.

Blue Orange Games has generously offered to include Battle Sheep in my Back to School/5 Year Blogiversary Celebration. 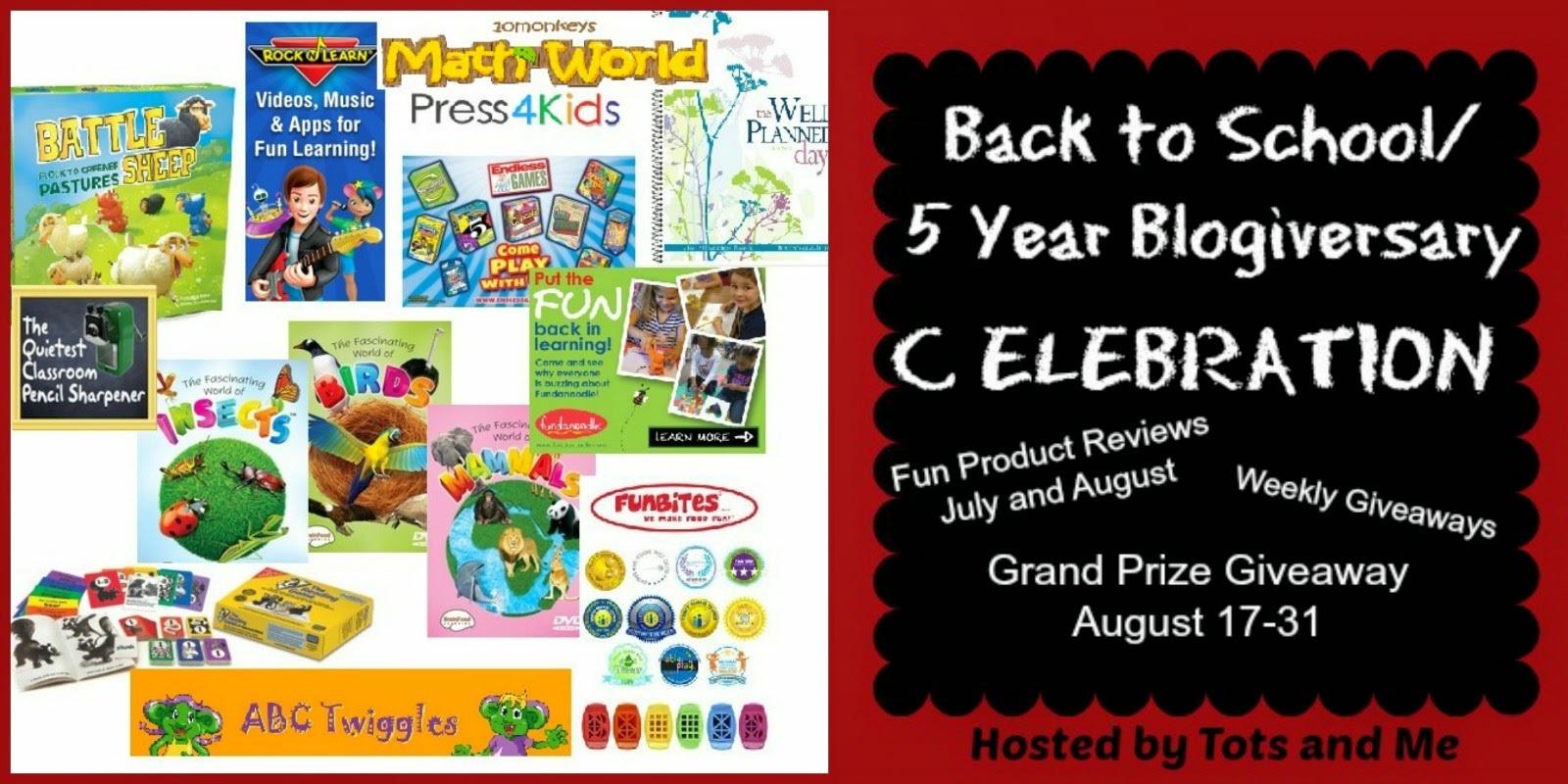 How would you like some extra entries into this giveaway before it even starts?
Head on over to the Blue Orange Games website and tell me what other product catches your eye. Leave the answer here in the comments with your email and when the giveaway is live I will email you the secret code to place in the Rafflecopter for a bonus 10 points.

Don't miss out on the Grand Prize Giveaway!
Click here to enter the giveaway.
Posted by kewkew at 9:20 AM