Do you long to prepare delicious and wholesome home-cooked meals to your family?
Do you think it would be too hard to follow recipes with tons of hard-to-find ingredients?
Do you already have tons of cookbooks that you rarely use?

I would like to introduce you to Simplified Dinners from Simplified Pantry, which I had the wonderful opportunity to review as a member of the TOS Review Crew. The author, Mystie Winckler, started on a journey towards simplified, healthier meals when her child's corn allergy was discovered. She found that "Simple, from scratch cooking not only saves money, but tastes better, too. " So, she went about creating a way to have the basic recipes on hand using basic ingredients.

The premise is that, many, delightfully tasty dishes can be made by keeping just a minimum of  ingredients on hand at all times.  Not only does this simplify menu planning, but it simplifies shopping as well.  The author has included a Master Pantry List which includes all the ingredients you need to make every meal in this book. It is divided into the following categories:

When you're running low on something, you can make a check and make sure you pick it up at the store.  That is so much easier then walking up and down every aisle looking for something to catch your interest for dinners during the week while insisting that your young children behave.  NEWSFLASH...kids think shopping is boring.  The only time they enjoy shopping is if you're shopping for THEM.

Would you like to see the Master Pantry list? You can visit the Simplified Dinners site and download a sample, which includes the Table of Contents, the Introduction, the Master Pantry List and a sample page of recipe variations.

My husband was thrilled with the thought of limiting our pantry and being able to un-clutter our cupboards. In fact, he had us get right to work organizing them. 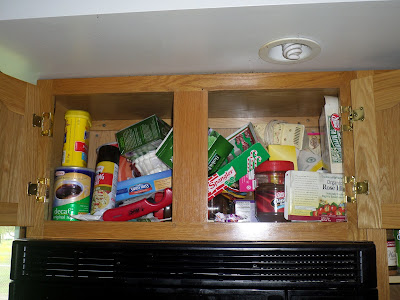 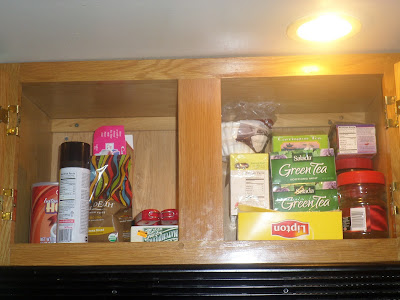 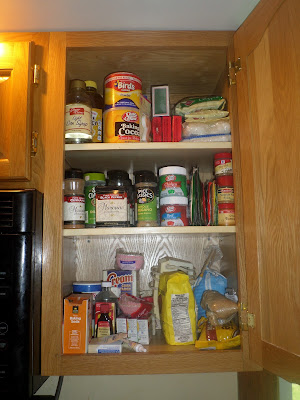 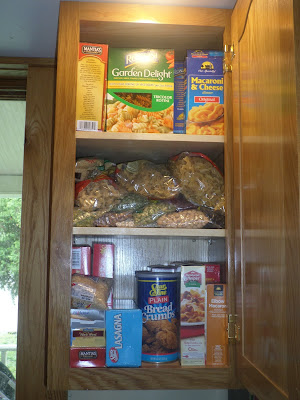 (Unfortunately, I didn't think of taking "before" pictures of the last 2 cupboards, so you can't see the amazing transformation. Let's just say, they were very cluttered and unorganized.)

The recipes included in the book are divided into several categories: bean soups, baked potato dinners, slow cooker roasts, skillet cutlets with pan sauces, and foil packed fish to name a few. There are also a couple of breakfast ideas. (You can find the full List of Meals at the Simplified Pantry site.)

Each set of recipes (there are several in each category) starts off with an step by step "process" listed at the top of the page.  Underneath there are several variations of the process all with their own unique flavors and all only needing the ingredients on the Master Pantry List. You follow the same steps for each variation on the page, only changing/adding ingredients as you go or perhaps skipping a step. For example:


One of my favorite pages was "Skillet Cutlets with Pan Sauces" because, well, we just love using boneless, skinless chicken in recipes. That said, you do not just have to use chicken with these recipes. She has listed 6 different sauce recipes, noting whether they would go best with chicken, pork, beef or fish.

Below are all the ingredients needed for the Sweet and Sour Chicken recipe. 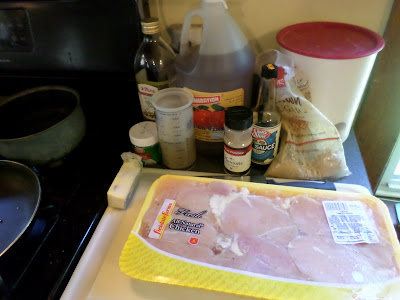 There were 7 steps to this recipe. 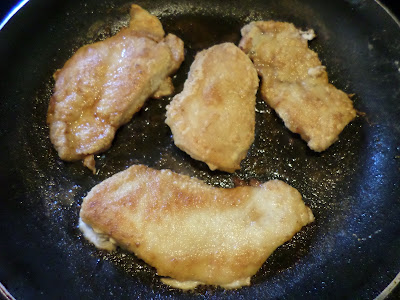 5.  While the meat cooks, mix pan sauce ingredients to equal 1/2 cup of liquid per 4 servings. (I doubled this because we like extra sauce.)

6.   Dump pan sauce mixture into the hot- but empty- pan. Whisk to deglaze the pan. Simmer vigorously until reduced by half (Should take under 10 minutes). 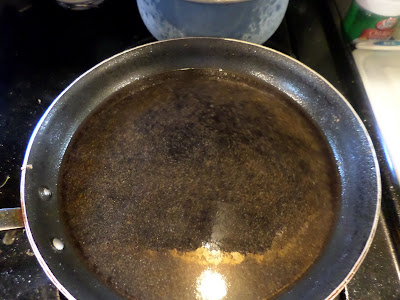 7.  Remove from heat, whisk in 1 Tbs butter and spoon sauce over each portion.

I actually did the last step a bit different. The chicken had started to get cold so we put them in with the sauce to allow them to heat through again. Because we did that, I forgot to add the butter. I have to say, I liked it well enough without the butter that I am not sure if I am going to add the butter next time. 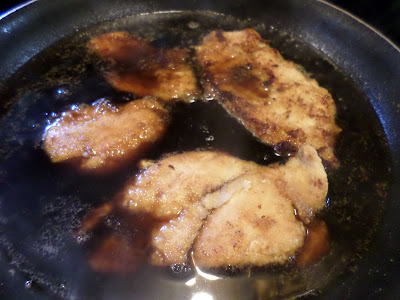 I think the flavor absorbed into the chicken really well by reheating the chicken in the sauce. I added some  carrots and parmesan coated noodles to complete the dinner. 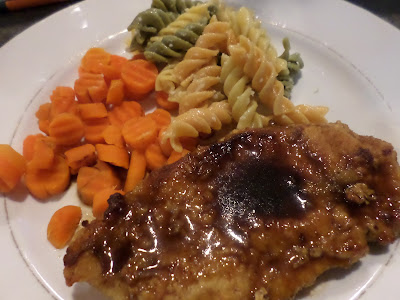 The following night I changed up the meal by using the Tangy sauce recipe and adding rice and green beans. 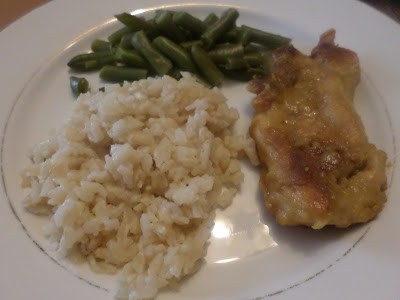 We didn't care for this one as much. It didn't help that the chicken didn't seem to cook as thoroughly this time and needed to be reheated longer, leaving me no sauce for topping the chicken and rice as I had wanted.  I thought I had made enough sauce as I had the night before. In fact, with the sweet and sour sauce we had way too much.

I have to admit, this is the one thing that has frustrated me with this book. I understand that the author didn't go about making a "recipe" book with exact amounts listed. Unfortunately, I am one who NEEDS a recipe with specific ingredients, at least for the first time I make it. Granted, she states in the introduction, "The primary purpose of these recipes is not so much to provide recipes as to give reminders of the general method of certain standard family dinners."  She states three reasons for not giving exact measurements.


However, I would have loved if the author had taken into consideration that not everyone is going to know the "general method" at the beginning. Though it might be second nature to her, there were several things that I had to look up elsewhere, such as what in the world a roux is, in order to finish making our meals. I thought an appendix with some definitions would be extremely helpful for beginning cooks.

I would also love if there was a recommended amount listed for each ingredient instead of just a ratio. Then, if I find I don't like the recipe the way it is listed I know how to play with it. I have personalized many recipes that we love in our house; however, I have always had a base recipe to go by.  I have always envied those who can throw ingredients together and get a mouth watering meal. My husband actually came to my rescue a couple of times as he is more daring when it comes to recipes.

Here, let me share some of our other favorite recipes from the book. I love being able to throw some ingredients into my slow-cooker and not have to worry about it during the day. Especially with trying to get lessons done, deal with a baby, and get dinner on the table by 5 so hubby can go to work. There are several different recipes for Slow-Cooker Roasts using either pork or beef. We really enjoyed the Barbecue Pork. 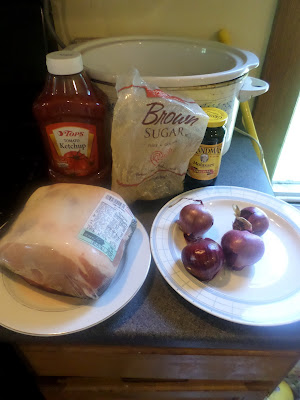 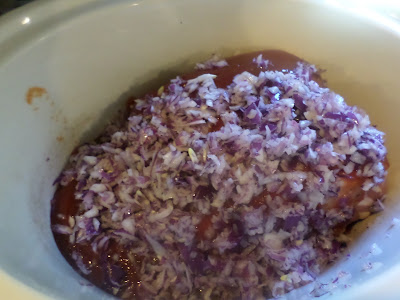 I did forget to take a picture of it when it was finished. But I shredded the pork after it had cooked for several hours. Then the shredded pork went back into the sauce to cook for a while longer. This went really well with corn on the cob and biscuits. We had company over that night and I couldn't believe that my friend went back for, not just seconds, but thirds. Let's put it this way, she usually isn't very fond of my recipes. So, this was definitely a "keeper."

Another yummy dish was the Foil-Packet Fish. So simple and quick-cooking, with a few different variations. You can also add vegetables in with the fish while it cooks, however, we preferred it with the veggies cooked separately. 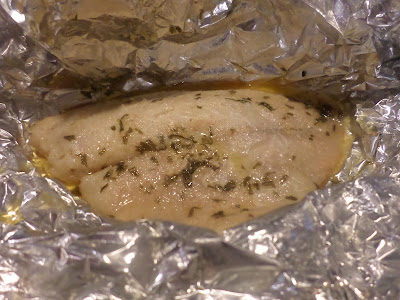 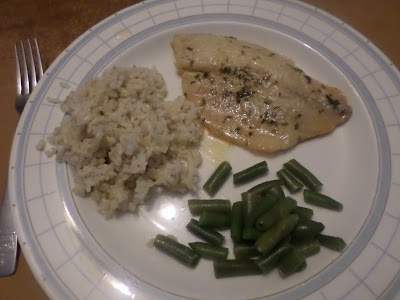 By purchasing this book you will have so many different variations of recipes you can go a long time before you repeat a recipe. Or, like me, you may find a recipe that you like very much and want to cook it again and again. This PDF e-book can be purchased for $12.99. Mystie has also created a Gluten and Dairy Free Simplified Dinners book. This would have been great while my son was still living here as he had dairy allergies. In fact, I may find myself using some of the recipes as I have some friends who require a gluten-free diet. This book can also be purchased for $12.99.

In addition to the Simplified Dinner books, Mystie has created a Paperless Home Organization book which is "a how-to guide to creating a digital homemaking binder." This sells for just $3.99.

Organize Your Life and Home

Best of all, this book shows you how to get organized using only free, web-based applications that sync with free apps on both Apple and Android devices.

I chose not to use this book as I prefer a physical copy of books and lists and such. However, you can check out the other crew reviews to see what others thought of the 2 additional resources.

The author has generously offered a 30% discount if you would like to purchase any of these book between now and June 3rd. Just use the code- TOS2013