"Patterns of Evidence: The Exodus" {A Review and Giveaway}

I had the wonderful opportunity of receiving the documentary "Patterns of Evidence: The Exodus," thanks to FlyBy Promotions. It seemed like perfect timing, as we are going to be studying the Old Testament times this year, spending quite a bit of time looking at the Israelites time in Egypt and the Exodus, plus the land and culture ancient Egypt as well. 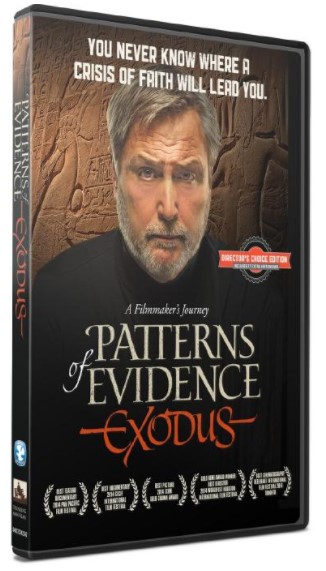 "Patterns of Evidence: The Exodus" is Tim Mahoney's first full feature documentary film. It was released in January 2015.

"The film took 12 years to develop and takes a scientific approach to investigate the events of the biblical Exodus. The overall vision for his film company is to explore "patterns of evidence" that support the biblical narrative and engages the world in a conversation. The film takes a balanced approach and leaves the audience to decide for themselves if the Bible is real history or myth."

The documentary starts with the Bible verse Exodus 13:3:

"Remember this Day when you came out of Egypt, out of the place of slavery, for the LORD brought you out of here by the Strength of His hand."

In the film, Tim Mahoney, who considers himself a "reluctant participant" in the controversy, is faced with a crisis of faith. He was brought up believing the stories from the Bible, as many others have been. But events that were once believed to be true have started to be doubted. The Bible was seen as truth for 1500 years in Western civilizations, but due to archaeological findings not fitting the timeframe of the Bible, the events told in the Bible, such as the foundational story of Exodus, are now met with skepticism. So, he set out to find out if there was any hard evidence for the Exodus at all.

His quest led him to the Middle East where he met with and spoke to many distinguished people. The documentary features the filmmaker interviewing such people as Benjamin Netanyahu, the Prime Minister of Israel, and different Egyptologists such as: David Rohl, James K. Hoffmeier, Manfred Bietak, Kent Weeks, and Charles Aling. Additionally he interviewed archaeologists such as: Israel Finkelstein and Norma Franklin. and rabbis such as Rabbi Manis Friedman.

Mr. Mahoney used a "Wall of Time" to help keep all this information in perspective. 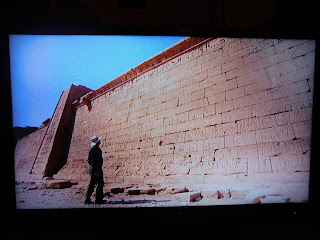 He used this to compare Biblical history with Egyptian history. 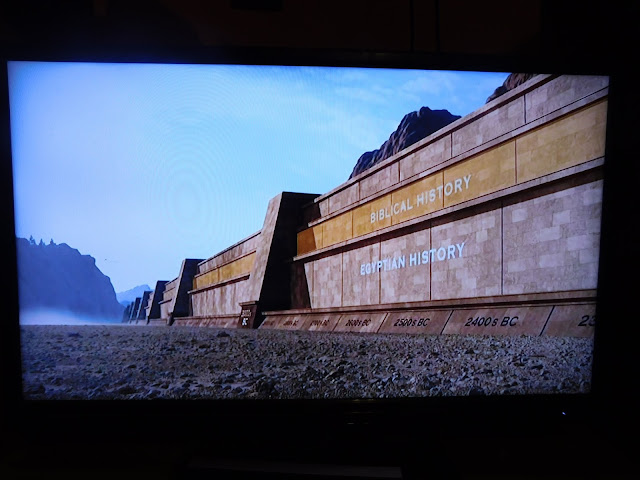 Tim Mahoney discovers that there are findings that seem like they could fit the biblical story, yet the experts in the field still refuse to connect them to what the Bible tells us. Mr. Mahoney discovers that the biggest barrier is the Ramesses/Exodus Theory, which states that the Exodus would have happened during the time of Ramses II. However, evidence that has been found for the Semitic people to have been in Egypt is dated centuries earlier than this theory places the Exodus.

So, he decides he needs to look at this scientifically, looking for "patterns of evidence." He searches for evidence to prove that the important parts of the Exodus story, starting back at the arrival of the Israelites in Egypt, actually took place. 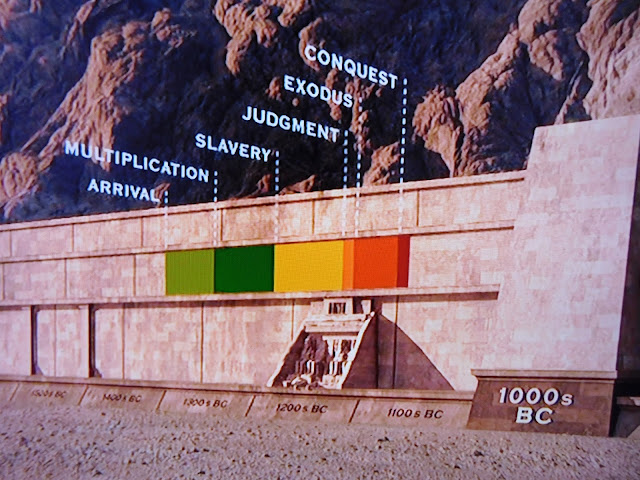 As we journey with him during this documentary, we discover that there are many findings that follow the Bible story. He delves into their arrival in Egypt, the story of Joseph, the Israelites living there and multiplying. He looks for evidence of slavery in Egypt that fits the Bible story. He then looks into the judgement, actual exodus, and the conquest of the Canaanite lands. Finding that there is definitely proof that fits such events, but as mentioned above, they take place a lot earlier than would be expected, so "experts" deny that these events are referring to the Israelite people.

What I thought about "Patterns of Evidence: The Exodus"

Quite frankly, I have found all this evidence quite compelling and intriguing. It all goes back to the "experts" interpretations and datings. Which makes me think back to the creation/evolution debate. The supposed experts in the field are not to be questioned. Even if their findings have led to doubt and skepticism of the Bible, we are to belief what they are telling us. On the flip side, there are those religious leaders who tell us, we don't have to worry about what science tells us, we just have to have faith. So, they allow doubt to creep into the church, because these supposed "facts" are taught to the people, who then end up losing their faith. People are so willing to take fallible man's word for such things as evolution and datings of when events thousands of years ago happened, that they aren't willing to look at the truth of God's word and see how it may just fit, if people are just willing to say, hey, we might have been wrong when we said such and such happened at such and such time.

I actually got chills multiple times while watching the documentary, because there is actually evidence for so much that is written in the Bible. I found it quite interesting that there is a site where it appears the Israelites could have lived for those centuries before Moses led them out of Egypt. A place called Avaris. There are even remains of what was a statue that may have been of Joseph.

I really appreciated seeing the different archaeological sites and the computer generated images that show how all of this fits together.

I can't wait until we get further into our school year. When we get to our lessons on the Israelites in Egypt, I will definitely be sharing this film with the children. Though we won't watch it all the way through in one sitting.

"Tim Mahoney founded Mahoney Media Group, Inc. (MMG) in 1989. MMG focused its business on television and video production for regional and national companies. In 2014 Tim founded Thinking Man Films & Media as an international documentary & publishing company with a focus on education and the Bible. Tim produced numerous productions for Christian organizations including Billy Graham Association, World Wide Pictures, and Compassion International. Tim also served as the President of the board for the International Christian Visual Media Association (ICVM)."


Some interesting facts about the film:


In addition to the disc with the actual documentary, there is also a Bonus disc with several interesting features.


and even a little teaser about the next Patterns Film that will be coming sometime in the future. I will definitely keeping my eyes peeled for more information about that.

This is definitely a documentary that I can recommend if you would like to look into the truth of the Exodus.

The film is available to purchase on the Patterns of Evidence website. There are different editions, such as the Director's Choice, Collector's Edition, Director's Choice BluRay, sets with the book and film, and packs of multiple copies.

I have been given the chance to offer my readers a discount code for $3 off the Director's Choice Edition which normally sells for $19.95. Just use the code MK1 while purchasing on the website.

Better yet, you have the opportunity to enter to win a free copy below!!

Time for that giveaway! 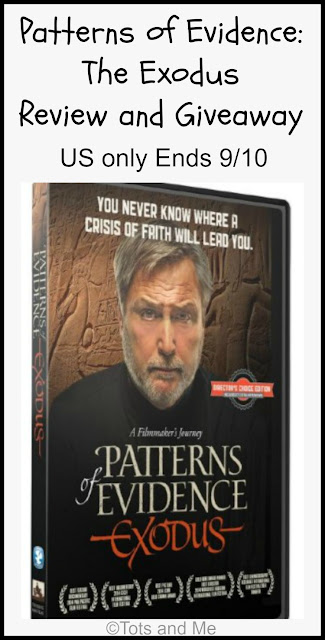 Great news! I have been given the opportunity to offer a giveaway for one person to win their own copy of "Patterns of Evidence: The Exodus."

This giveaway is open to Continental US residents 18 and over.
The giveaway runs August 31st through September 10th.

"Disclosure (in accordance with the FTC’s 16 CFR, Part 255:  “Guides Concerning the Use of Endorsements and Testimonials in Advertising”):  Many thanks to Propeller Consulting, LLC for providing this prize for the giveaway.  Choice of winners and opinions are 100% my own and NOT influenced by monetary compensation.  I did receive a sample of the product in exchange for this review and post. Only one entrant per mailing address, per giveaway.  If you have won a prize from our sponsor Propeller /FlyBy Promotions in the last 30 days on the same blog, you are not eligible to win.  Or if you have won the same prize on another blog, you are not eligible to win it again.  Winner is subject to eligibility verification."

Disclosure: I received the 2-DVD set "Patterns of Evidence: The Exodus" in exchange for my honest review. No further compensation was given. This did not in any way influence my review. I only recommend products I use personally and feel will be a good products for my readers.
Posted by kewkew at 12:58 PM