Years and years ago, I took classical Greek. That was way back when I was in high school. We had to take a classical language and I opted for Greek instead of Latin. I loved that Greek was taught to be able to read, as opposed to speak to others, because, let's be honest, who actually speaks in classical languages anymore. I admit, I also thought it would be fun to be able to learn a different alphabet. I enjoyed the class, though I didn't do the greatest once we got into all the intricate details of the grammar. Ultimately I ended up, thankfully, passing the class, but then I graduated, and years passed, and those details became a mist in that fog of memory. Though, I did still remember most of the alphabet and a word or two. Fast forward 20 some years, and suddenly one of my children is going to have to opportunity to work on Biblical Greek using Hey, Andrew! Teach Me Some Greek! - Level 3 Set from Greek 'n' Stuff. I was so excited for this opportunity to refresh my memory, and to start an introduction to a language that will hopefully, one day, help us be able to get fresh insights into the New Testament. To me, this was perfect timing, as we are going to be studying Greek roots with our core curriculum this year. 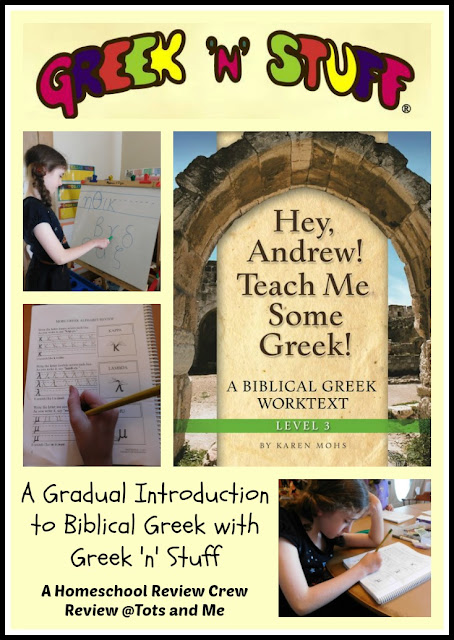 We received the Hey, Andrew! Teach Me Some Greek! - Level 3 Set which is composed of a Worktext, a Worktext Answer Key, and a Pronunciation CD. 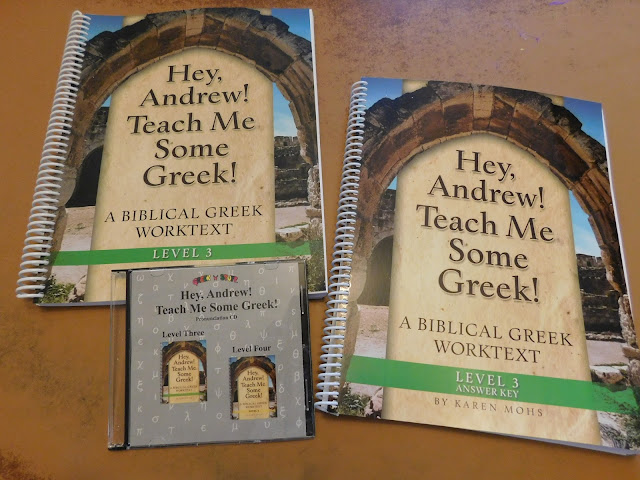 The lessons in Hey, Andrew! Teach Me Some Greek! are great for beginners as they start gently, gradually advancing with additional vocabulary and a slow introduction of different grammar concepts. Level 3 is designed to be used for children in grade 4 and up. The books are spiral bound with glossy covers, and the lesson pages are simple black and white text.

The Worktext is 180 pages in length, which does not include the flashcard pages in the back. There are 36 lessons, each of which have between three and eight pages of work. It is designed for students to do one page per day, though more can be completed if desired. This would mean you could complete a lesson in 1-2 weeks, depending upon how many days per week, and pages per day your child works on Greek. The Worktext concludes with several pages of appendices and the flashcards that need to be cut out and glued together.

The Worktext Answer Key explains the schedule of the lessons and gives teacher tips for each of the lessons, explaining the grammar that is taught and sharing derivatives for new vocabulary words. Then there is the answer key portion, which is a copy of the entire student worktext with the answers printed on. It also includes the same appendices.

The Pronunciation CD starts with a fun song to help learn the Greek alphabet, then contains short recordings of the correct pronunciation of each word taught. Pronunciations are included for both Level Three and Level Four. 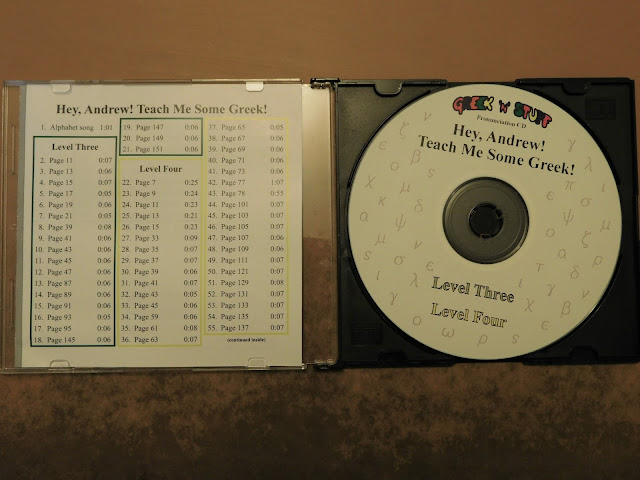 Let's take a look at the lessons:

The first two lessons are an introduction of the Greek alphabet. And the next two lessons introduce six new vocabulary words. For children who have completed Level 2 of Hey Andrew! Teach Me Some Greek!, the first several lessons are a review.

Each page of the alphabet introduction/review contains three letters. 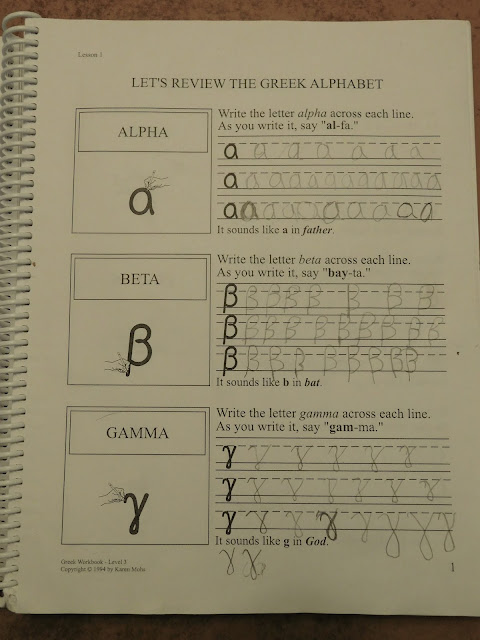 The student is shown how to form the letter and is taught its name, how to say the name, and how to pronounce the sound it makes. Three lines are provided for practice. The spaces are a bit different than regular lined paper, in that the space beneath the dotted line is bigger than the space above it.

After all the letters are taught, there are a couple of pages to review what was learned.


Here the child is to write the letters in order and then determine which letter matches the name of the letter correctly in the triangles. 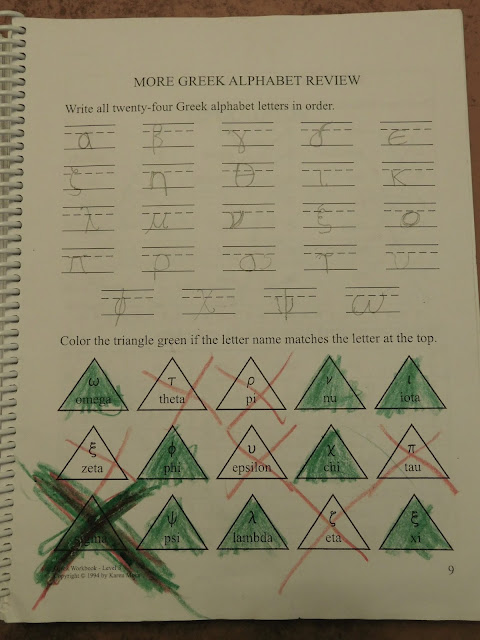 On the second review page the child is to match letter to letter name and circle the correct letter out of a choice of two. 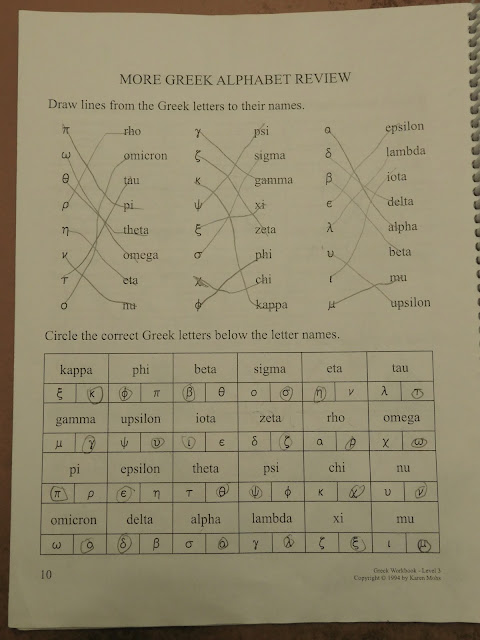 The book then moves into learning new vocabulary, one word at a time. As I mentioned earlier, if a child has already used Level 2, these first couple of vocabulary lessons are a review.

The Greek word is shown in large, bold font. The meaning is then given, as is the pronunciation. The child is to write the word, and then there are activities. As ἄνθρωπος is the first word learned, the activity was to have the student draw a picture. However, as more words are learned, there are different activities to help reinforce each word, such as matching, circling, and writing the correct words and eventually sentences. 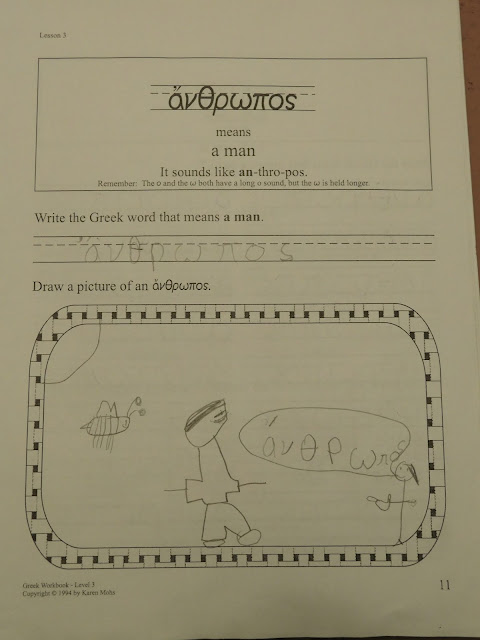 When a new word is taught, the next page is filled with lines on which the child can practice writing the word. 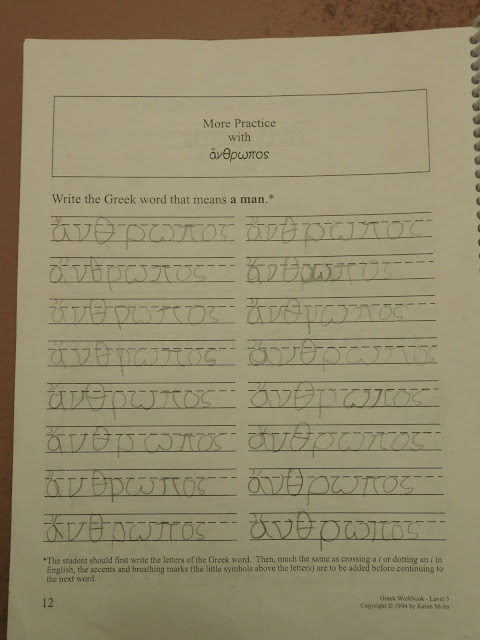 Here is an example of the activity section on the page after βλέπω is introduced. As of this page, four words have been taught, so the child has the opportunity to determine the correct definitions. 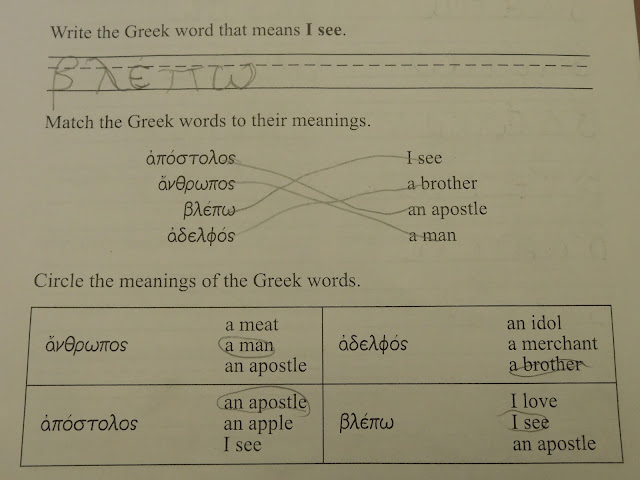 And after six words are taught, there are more practice pages, to really help the child master the words. 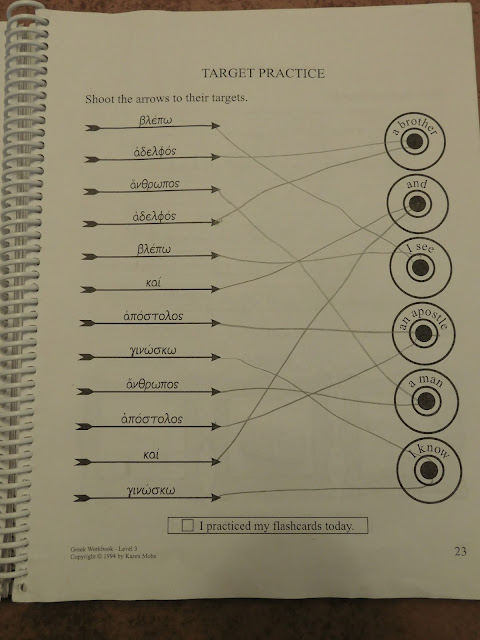 In lesson 5 the children begin to learn simple grammar concepts. The different endings for words are slowly introduced, endings that change due the different cases and whether they are singular or plural, though children are not expected to understand all the details regarding the grammar, they will learn to recognize the pattern as they see the words written in sentences and write sentences of their own. 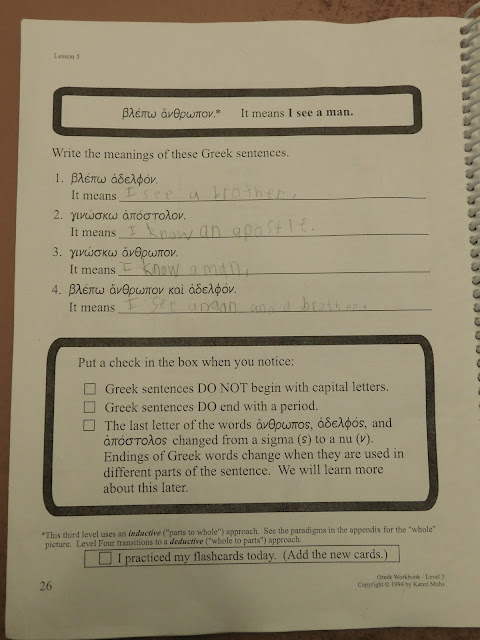 Prior to this lesson, all of the nouns learned ended with a sigma (ς). This is the ending for a noun that is the subject of the sentence. This lesson introduces the new form, ending in a nu (ν), which is used when the noun is the object of the sentence. As you can see, the author exposes the child to the new form, hoping they will notice the difference by themselves, but then makes sure they notice it by adding the check boxes. The child doesn't have to understand what objects or subjects (or the nominative or accusative cases) are, they just begin working with them.

During the days that the student will be working in lesson 5, there will be exposure to the differences between object and subject, and singular and plural forms of nouns. So, there is lots of practice for these grammar concepts before moving on to the next one in lesson 6 (where verb tenses begin to be taught).

Over the course Level 3 of Hey Andrew! Teach Me Some Greek!, the child will learn several new vocabulary words, then learn some new forms of both nouns and verbs, and then get lots of practice with those concepts before learning more vocabulary words and repeating the cycle. All in all, this book teaches 21 new vocabulary words: 12 nouns, 8 verbs, and the word "and." But they are learning way more, as they are learning different cases and tenses. Cases learned are: accusative, genitive, nominative, dative, and vocative. Tenses learned are: present active (first person and third person, singular and plural, then second person, singular and plural).

We have really been enjoying our gradual introduction into Biblical Greek. I started out by teaching the letters a few at a time, as shown in the book. I would write the letter on the whiteboard and Amelia would complete a line or two in the Worktext. I figured that would leave her room to review. 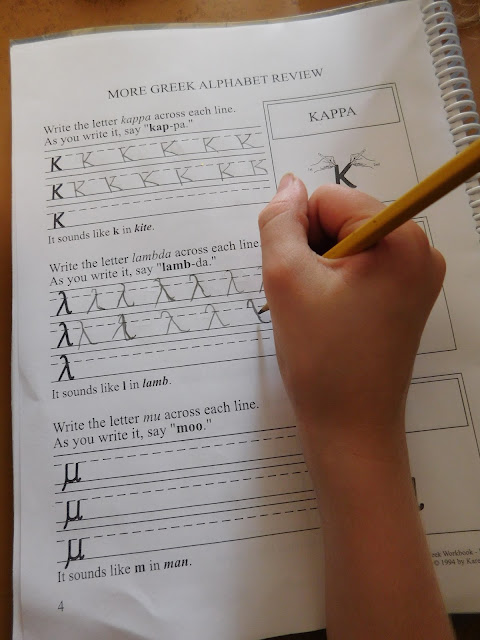 Each day, before starting the new lesson, she would write one each of the previous letters learned. I also reviewed the letters by writing them on the whiteboard and having the children point to the correct letter or write them for me. Even though the other children aren't officially learning Greek with Amelia as we only have one consumable worktext, they have been able to learn some by sitting in when I write on the board. They have enjoyed this little introduction to the letters. 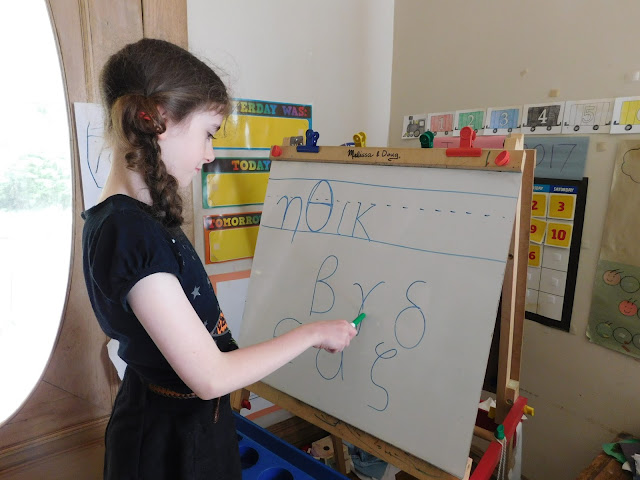 As we continued on to the vocabulary section, Amelia began working at a pace of a couple of pages a day, a few days a week. I had her do both pages for each new word in one sitting. She starts out by writing one each of all the letters, and one each of all the previously learned words. Then she writes the new word, does the activities on the page, and then writes several more of the same word on the second page. As we did while learning the alphabet, she leaves room so she can write one of each word each day to help with review.

Amelia has now moved on to lesson 5 where we are starting to learn the accusative case. Up until now, she has been able to work quite independently while learning her new vocabulary. While it is possible she would still be able to do the lessons herself, I am going to be working with her for a couple of reasons. Number one, I want to learn alongside her so I can. . . well. . . learn Greek too, and number two, I want to ensure that she is actually understanding the new concepts she is learning.

One thing we have not been able to do is the Bible Copy Work. This part of the program is mentioned in the Dear Parent/Teacher letter at the beginning of the book, and there are instructions in the Appendix. Sadly, this needs a Greek Interlinear version of the New Testament which I do not have and could not justify purchasing at the moment. Though I can see the benefits of writing out Scripture directly from the Greek and then writing the translation, I will say, you can still do this program without that element.

Hey, Andrew! Teach Me Some Greek! Level 3 really is a great introduction to Biblical Greek. I appreciate the way several new words are learned and then they practice with all the words learned up to that point. As I look ahead in the book, I do believe I may be able to learn right along with Amelia, and not get confused by the grammar as it is introduced slowly with lots of opportunity for practice. It seems I definitely picked the right level for our homeschool.

In addition to Hey Andrew! Teach Me Some Greek! Level 3, the Homeschool Review Crew has been reviewing other products. Some reviewed Level 2 and others reviewed different Bible Studies. Just click on the banner below to read all the reviews.