Galaxy Buck: Mission to Sector 9 {A Review and Giveaway}

We had the wonderful opportunity to review the newest movie from Phil Vischer called Galaxy Buck: Mission to Sector 9. You may recognize the name Phil Vischer if you are a fan of "VeggieTales." I have been sharing VeggieTales videos with my children since my oldest kiddos were little (and they are now all grown up and out on their own). Mr. Vischer has since moved on from "VeggieTales" and has been working on new projects. I have heard of his "What's in the Bible?" series, but we haven't had a chance to watch any of them yet. When the opportunity came up recently to review Galaxy Buck: Mission to Sector 9, I jumped at the chance. I loved that there were going to be nods to both Star Trek and Star Wars, as I love both of these science fiction worlds. 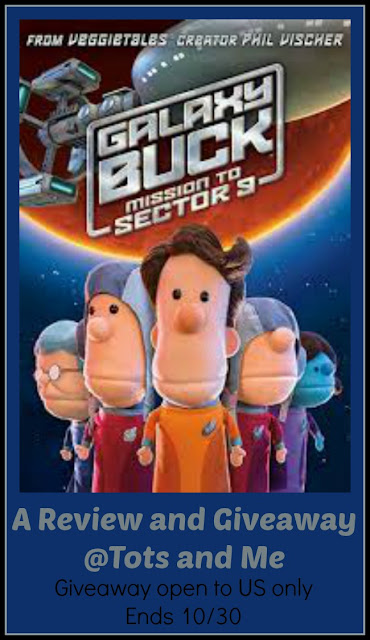 About the movie:
Buck Denver has a simple dream - to save the galaxy.  Working for the Galactic Mission Board, Buck dreams of carrying God's love to every corner of the Milky Way!  Except he doesn't have a starship.  Or a crew.  Or even a captain's license.  He just needs a chance.  But when that chance comes and Buck finds himself leading a real mission into deep space, things don't go at ALL like he imagined!  If he's doing what God wants him to do, why is everything going wrong?  From VeggieTales® and What's in the Bible? creator Phil Vischer, Galaxy Buck: Mission to Sector 9 is a wild, galactic adventure that teaches kids a powerful lesson about trusting God with everything - even our dreams!

We were given access to the movie online in order to watch the movie before it was released, so we all gathered around the computer with our ice cream to enjoy the movie. From the start, the movie grabbed my girls' attention, though Harold wasn't really interested. He did end up gravitating toward the computer while we watched though. This movie seemed to be just right for the girls' age range, 5-8 years old. I have to admit, they were a bit unsure about the fact that the characters were puppets at first, but after a bit they thought it was "cool."

We enjoyed watching Buck's journey in learning to discern what God wants from his life. He was quite dissatisfied with his work at the Galactic Mission Board, answering phones and making sure people received their tote bags. He felt that God had bigger things for him. In fact, he had a poster hanging on the wall of his cubicle that stated, "God wants you to do big things!" His dream was to go into space to share the gospel, but was that where God wanted him?

When a transponder malfunctioned in Sector 9, Buck convinces Pastor Paul to allow him to lead a team on a mission to fix it. Though Buck didn't have a captain's license, he had been taking online classes, and the mission could count as his final exam. His friends from the call center become his crew, along with Sunday School Lady who was to be supervising his "final exam."

Of course, they were expecting things to go smoothly. I mean, who would have thought the power rod for the transponder would be missing, or that there would be aliens living on a supposedly uninhabited planet. In the end, it wasn't making sure the gospel message was preached, but that it was lived out, that made their mission a success, of sorts.

I was quite pleased by what the older girls took away from this movie. The Biblical teaching was clearly taught.

Here are a couple of pictures of what the children wrote about the movie.


This is what my 7 year old got out of the movie. 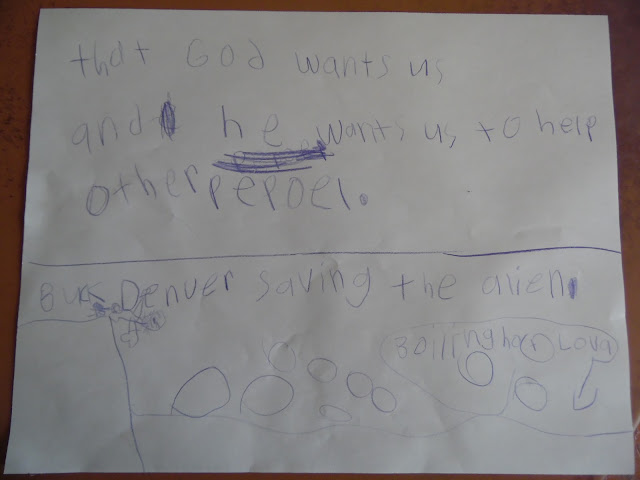 And this is from my 8 year old. 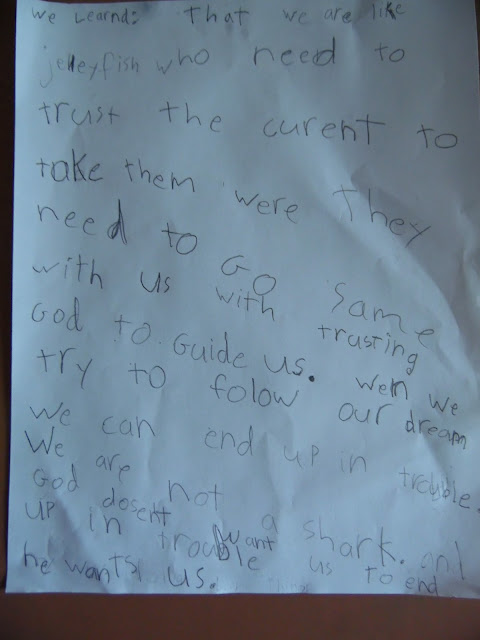 This was our first experience with Buck Denver, and I was quite impressed. I can't wait to watch more of the new products from Phil Vischer. I am so glad he is still reaching children with the message of Christ.

Here, check out the trailer for a sneak peek:


"Disclosure (in accordance with the FTC’s 16 CFR, Part 255: “Guides Concerning the Use of Endorsements and Testimonials in Advertising”): Many thanks to Propeller Consulting, LLC for providing this prize for the giveaway. Choice of winners and opinions are 100% my own and NOT influenced by monetary compensation. I did receive a sample of the product in exchange for this review and post.
Only one entrant per mailing address, per giveaway. If you have won a prize from our sponsor Propeller / FlyBy Promotions in the last 30 days, you are not eligible to win. If you have won the same prize on another blog, you are not eligible to win it again. Winner is subject to eligibility verification.”