As a part of Amelia's 5th birthday celebration I was given the opportunity to review Educational Insights' Fun Game Shelby's Snack Shack. 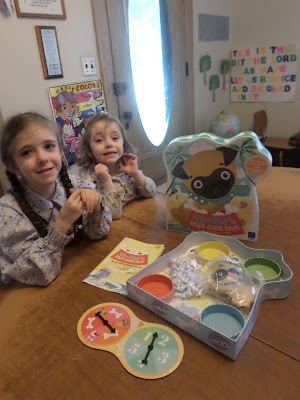 The box is the game board and it comes with:
4 doggie bowls
40 bones
1 double game spinner
1 Shelby Squeezer
and
An instruction guide 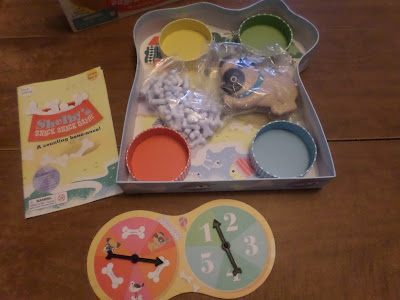 In this game, the players are taking turns with the Shelby Squeezer to collect the bones that are buried in the sand. The person who collects the most bones by the end of the game is the winner. The game ends when all the bones are collected.

To start the game we tossed the bones onto the game board box. 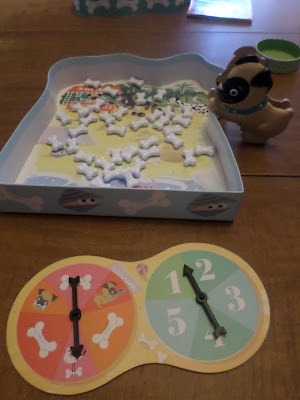 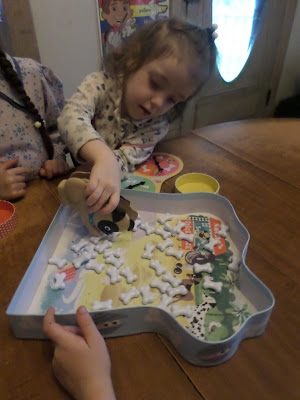 So, Hannah got to go first. She is a year under the recommended age, but she really enjoyed this game. She did use her hands more than the Shelby Squeezer, but toward the end of the first game she was definitely using it better and spinning the spinner with greater ease.

Using the adorable Shelby Squeezer helps children to develop their fine motor skills/pre-writing skills. This game is very similar to Sneaky Snacky Squirrel, which we reviewed last year. I believe this game was actually easier for younger children because the bones are easier to pick up than the acorns in Sneaky Snacky Squirrel. I thought the bones were going to be hard plastic, but they have a soft pliable feel to them, making them easy to pick up. 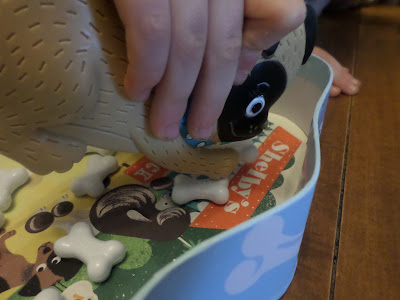 Additionally, when you pick up the bones you just have to deposit them into the bowl, as opposed to Sneaky Snacky Squirrel where you have to place them in specific holes on your stump. We love both games, but I can see Shelby's Snack Shack being used more by the younger children.

We did change one thing. As we are teaching the children it is wrong to steal, if we land on the Hungry Pug space we do not "steal" bones from other players. We go over to the other players and ask if they will share their bones. We also try to go to all the players or the ones with the most bones so the ones with less bones won't get so frustrated. 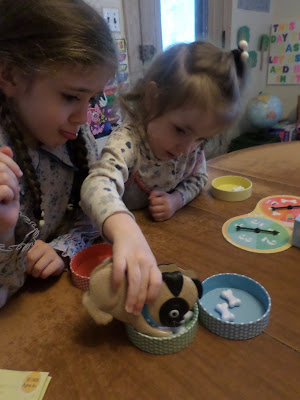 The second time we played, the game seemed like it was going to go on forever because we kept landing on the seagull and losing all our bones. So, we just had to end the game. It would be simple enough to play with a time limit and the winner would be the one with the most bones at the end of the time.

The children are working on taking turns, saying please and thank you and dealing with frustration.

I would highly recommend this game, and would say a child as young as 3 could use it with supervision. This is such a great game to work on the above mentioned skills. 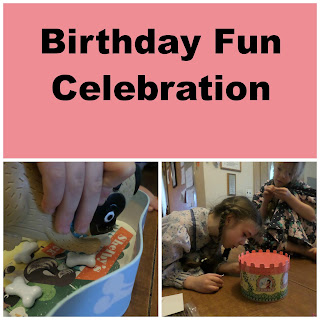 Disclosure: I received Shelby's Snack Shack Game in exchange for my honest review. I received no further compensation. This did not in any way influence my review. I only recommend products I use personally and feel will be a good products for my readers.
Posted by kewkew at 10:37 PM

Email ThisBlogThis!Share to TwitterShare to FacebookShare to Pinterest
Labels: reviews