It is very important to me to find fun, exciting, hands-on ways to teach my children. I have shared games previously here on Tots and Me that we have found fun and educational. Through the Schoolhouse Review Crew I have discovered a company called Birdcage Press that was co-founded by Wenda O'Reilly who has a Masters Degree in Education from Harvard and a Ph.D from Stanford.

Here is a little information from the Birdcage Press Website on how the company began:
"I first began creating games as a way to make learning more fun for my three young children. We made them up together, pairing favorite card games with different periods of art and history. I wrote a book to go with each game and my children acted as my editors. They made sure every fact in each book was interesting and easy to understand for readers of all ages.
We began publishing our games in 2000 and quickly received numerous awards for excellence. They are now sold in the world's major museums, as well as in fine gift, book, and toy stores. This year, we are proud to offer a range of games and other products that bring history, art and nature alive for the whole family. We hope you'll enjoy them. "

We had the opportunity to review the game Art Ditto, a memory game in which children can collect their favorite art and learn some important information about them along with learning 3 foreign languages: French, Spanish and German. 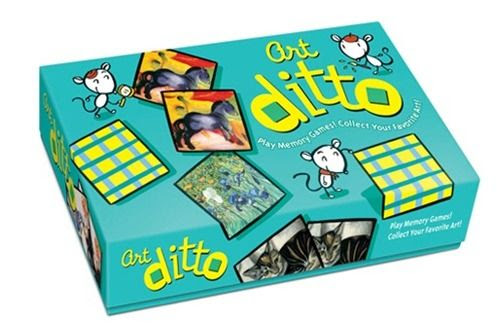 I've had several different memory type games in the past, but I have to say the quality of these was far superior. The 2.5 in. x 2.5 in. cards are a decent size for viewing the famous works of art. The cards have a glossy finish and are thicker than all the other memory cards I've ever had, making them nice and strong, which is a big benefit with 4 little ones.
The children matched up the cards and discovered that there are 3 different pictures for all 8 different categories.
The categories include: cats, fruit, flowers and boats, 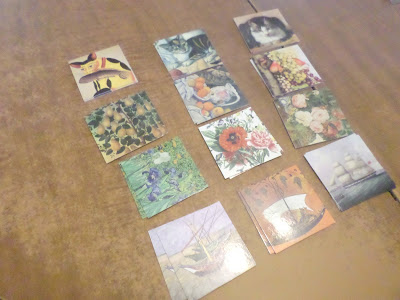 along with birds, music, tigers and horses. 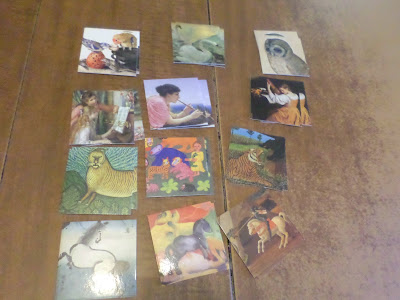 When we first played with the Art Ditto cards we played the same way we would play any memory game. The girls loved turning over the cards to find the matches. They definitely had an advantage over mommy, seeing as I have had a really hard time remembering things lately. 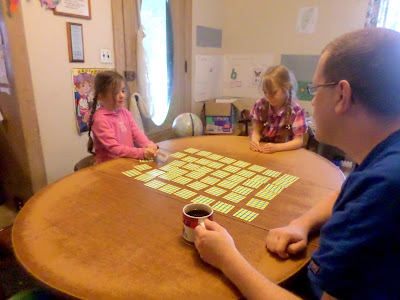 The game comes with 8 large cards, 1 for each of the categories mentioned above. 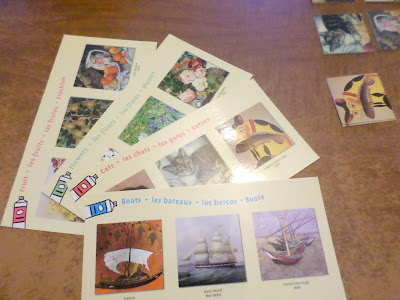 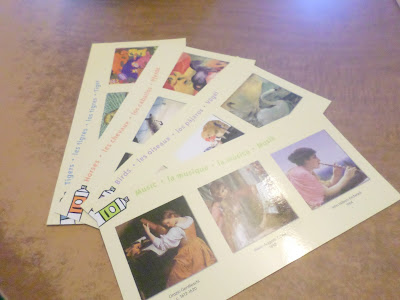 On the front of the card you will find the exact duplicates of the pictures that are on the playing cards, along with the artist's name, the year it was painted and the word translated into French, Spanish and German along the top. 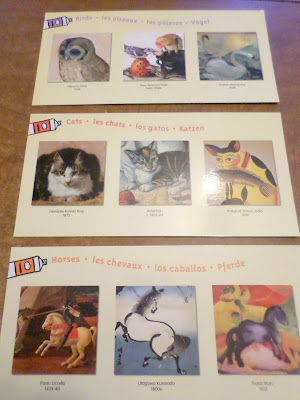 On the back of the cards you will notice two things. First of all, I noticed that the title of the art work is written under the picture along with a translation in the same 3 languages. Additionally, I noticed that we get to see the entire work of art. The front pictures and playing cards only show a portion of the actual painting. The children actually enjoyed comparing the pictures and noticing all the details that were missing. 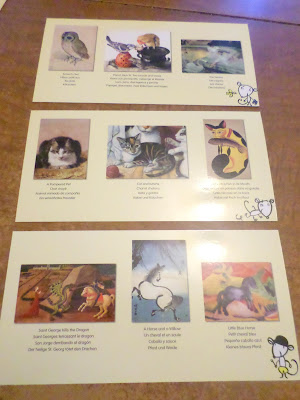 Here is a close-up of Saint George Kills the Dragon, one of the Horse cards. 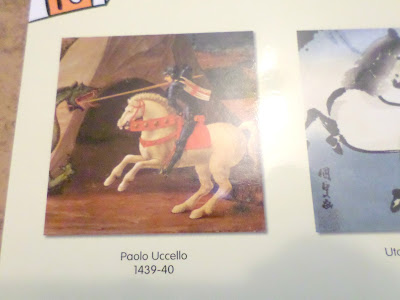 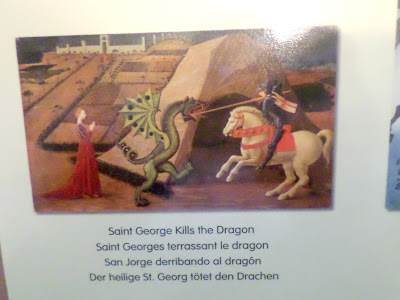 Each player gets to hold some of the large cards in front of them during game play. As there were 3 of us playing we each got 2 cards and I set 2 aside. Which actually works a little better for younger children because then there are less cards to go through to make matches. I let the girls choose their favorite category. Amelia likes the birds, Tabitha likes the cats and I love horses. Then they got to choose another. Amelia chose music, Tabitha chose flowers and I chose fruit. The boat and tiger cards (both large and small) were set aside.

The game is played the same as a regular memory match game, except we were hoping to get our matches in  the categories on the cards in front of us. For example, if I found a match that was on one of  my cards I got to keep both cards and lay them on the card in front of me. If the match was made, but belonged to one of the girls I had to give them one card and keep only 1 card. In order to keep the cards I added a little twist. I had the girls say what category the picture fell into, in Spanish (as this is the language we have been learning).

I have to tell you, I was thrilled that the girls saw this as helping each other, instead of getting upset that they had to give one of their cards away that they matched. 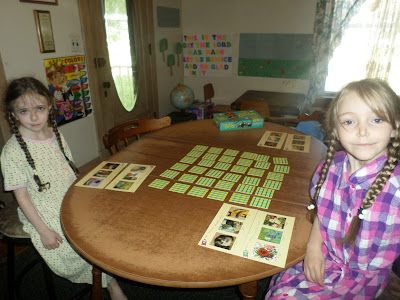 Remember I mentioned that they resisted playing with the Big Cards?
Well, after we finished the game Tabitha said she liked it better this way. And Amelia's favorite part of the game was that, "We got to find matches that were on our card." Even though Tabitha enjoyed it just as much, her favorite part was, "That everyone had fun."  I feel that making it into a cooperative game really helped, because Amelia especially can be a very sore loser.

All in all, we really enjoyed Art Ditto from Birdcage Press and would recommend it if you would like to have your children familiarize themselves with famous artwork while playing. This game is recommended for ages 4 and above, though I would recommend playing with less cards with younger children.
You can purchase Art Ditto for $24.95.

Birdhouse Press has many different games with a focus on different subjects, such as Art, Wildlife & Nature,  Histroy, and Air & Space. The Review Crew was able to review several different games. In addition to Art Ditto, which we reviewed, the Crew reviewed:

These games are all recommended for children a bit older, 5-7 and up.
You can see more reviews by clicking here.