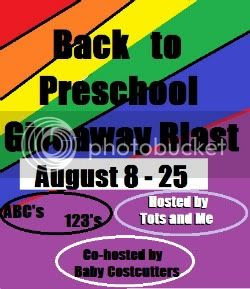 Welcome to another Back to Preschool Giveaway Blast Sponsor Spotlight in anticipation of the giveaway which starts on August 8th. Please note, that there has been a change in the dates for this event. We were without power for three days due to severe storms blowing through our area on Thursday, so I have to play catch up on a lot of things.
(If you would like more information on this event click here.) 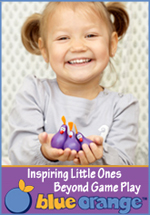 From the sponsor:
"Since 2000, Blue Orange Games has been creating award-winning games with remarkable quality and high play value. Designed to be easy-to-learn, adaptable to a range of abilities and to build upon important skills, their games grow with families and make lasting memories. There’s no mistaking a game by Blue Orange. Beautiful craftsmanship and an eye-catching aesthetic is their priority. As an eco-friendly company, they use durable materials that respect the environment and plant two trees for each one used in game construction. "
I found it quite intriguing that for every tree used in the making of their games two more are planted. Check here to see where they got the name Blue Orange In addition, there games have received multiple awards. And I can see why.
They sent me two different games to review. 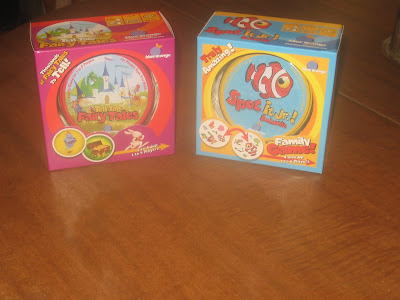 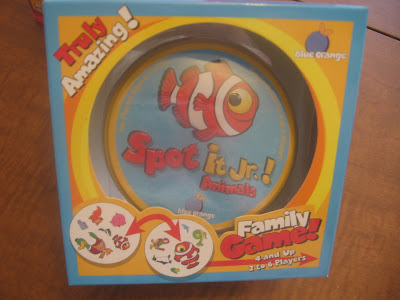 These games are stored in cute little tins, which is a great idea as far as I am concerned. It is a lot sturdier than a cardboard box and that is important around children.
The instructions come are enclosed in the tin on an accordion style circular book. 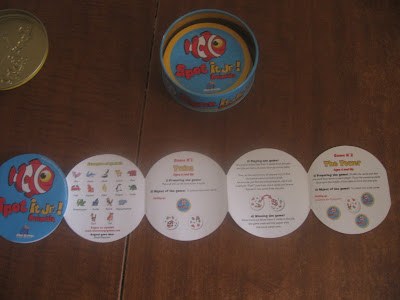 There are 5 different games that can be played, all of which revolve around finding the matching animals on these cute cards. This game is ingenious. Every pair of cards (it doesn't matter which two cards you pull out of the deck) will have one and only one matching animal.
Here take a look at two different pairs 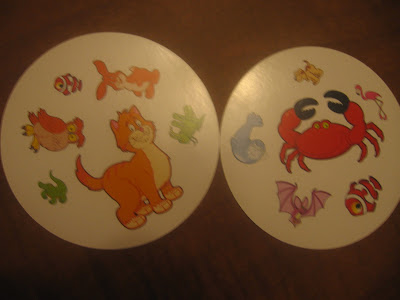 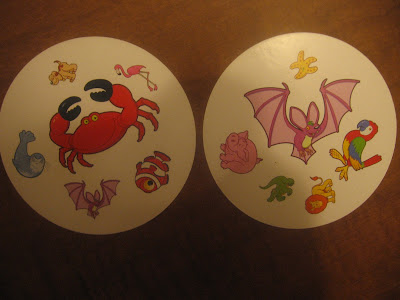 How long did it take you to find the matches?
Here are all the animals that are pictured on the cards. I love that they give you the name for each animal. I reviewed the name of each of them with the girls, they even learned some new animals. It was important that the girls knew the names because when they find a pair they need to be able to say it fast in order to claim the matching pair. 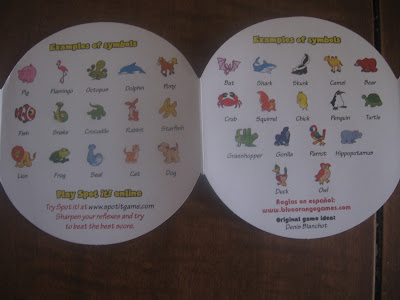 The girls especially enjoyed playing the first game, Twins. In Twins, you flip over 2 cards simultaneously. 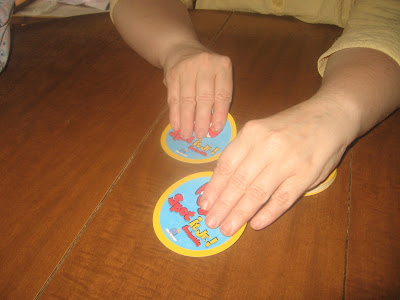 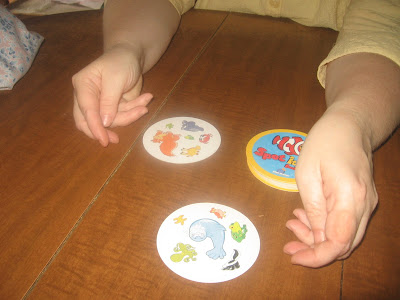 Everybody tries to find the matching pair. The first one to call it out gets to keep the pair of cards. Two new cards are then flipped over. 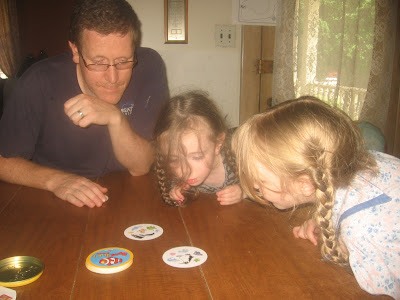 After all the cards have been used, the player with the most cards is the winner.
I love that children can develop their visual discrimination skills by playing this game.
They really need to concentrate, it is trickier than you think to find the pair, especially when under pressure.
Hannah wanted to have a look at what all the excitement was. She wasn't able to play yet though. It will be a fun way to teach her some animals though. 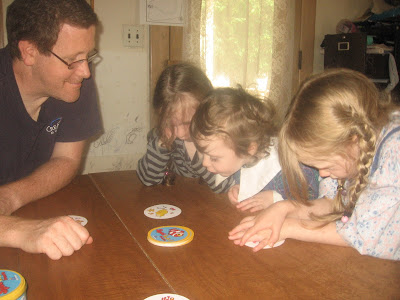 The game we are playing here is called "Tower." In this mini-game everyone is dealt 1 card and the remainder are placed in the center of the table. They are supposed to be placed face up, but I wanted to make sure we were all ready to play at the same time, so I just flipped it up when ready. We were to only concern ourselves with the card in front of us and the center card. When the match is found the first person to call out their match gets to keep the card from the center pile. This card is placed on the top of one's own pile and it is the card that needs to be matched next.
This game was a tad more confusing for the children. Amelia especially was distracted by the other piles. The other thing that confused her, was that we are always trying to match to the center card with the current card on top of our pile. Though it was a little more confusing, she did seem to be enjoying herself as was everyone else. 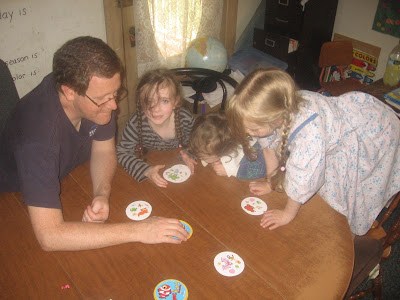 Both games we played are suggested for ages 4 and up.
There is one more mini-game called "The Well" that we didn't have time to play. This is also for ages 4 and up.
For older children there are two more variations:
"Hot Potato"
and
"Triplets"
So many fun ways to play this game!
I highly recommend this game for its fun and educational benefits.
For the youngest children playing the "Twins" game for a while may be recommended until they get the gist of the game.
The other game I was sent to review is called, "Tell Tale Fairy Tales" and it is packaged the same way as Spot It Jr! Animals. 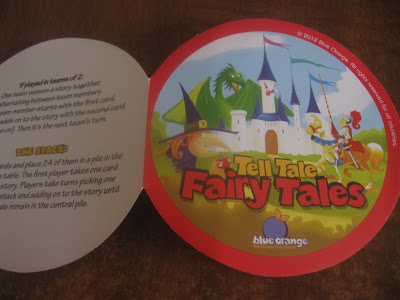 There are also multiple suggested ways to use these cards.
There are several games that can be played as individuals or teams of 2. What I love about these games are they are not competitive and they encourage the use of imagination. There is no right or wrong way to tell the story. Here are the suggested games:
"Storyboard"
Everyone takes 6 cards, places them in the order they want their cards and then you take turns telling your story.
"Round 'N Round"
This is the game we played. Everyone takes 4 cards. A group story is created by taking turns laying the cards down one at a time (one card per player each time around). 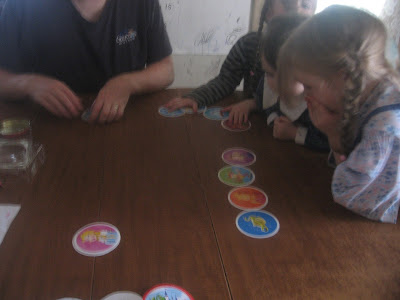 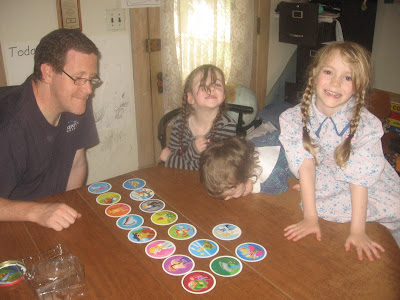 We had quite the story going here about an old man and a queen who had a daughter who sings and was dating a pirate. Unfortunately I can't remember it all right now. 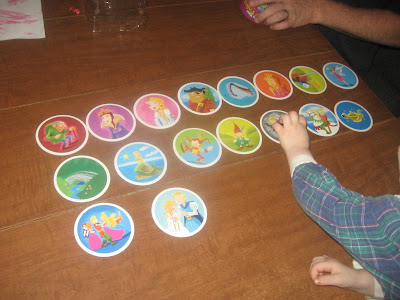 The other two games are called
"Showtime" and "The Stage."
I can seeing us using these cards in our homeschool for language arts and creative writing. I was thinking it would be great fun, as the girls get older, to have them take several cards, place them in front of themselves and write a story. Another fun early literary skill is sequencing stories. I thought perhaps we could take 3 cards and I would tell a short story. I would then mix up the cards and see if the girls could place them in the right order, telling back some of the story (I wouldn't expect a word for word retelling). I am excited to try out these ideas when we start school.
In addition these cards can be used as an alternative for the traditional bed time story. You would just need to pick some cards, they recommend 10, and tell your own story.
Once again, I highly recommend this game. So many fun ways to play and great educational benefits. A love of telling stories will contribute to a love of reading and writing, which is very important to me.
In addition to these two games Blue Orange has quite a few more "Pocket Games" plus they have "Tin Games" and "Wooden Games."
You can check their entire Games Chest out right here.
In addition you can check out Blue Orange on Facebook
Blue Orange Games-USA
or Twitter
@BlueOrangeGames
@SpotItGame
Additionally, they also have educational limited editions of Spot it! coming out this summer adapted especially for preschoolers! They are offering free printable versions of the games online.
There is:
Spot It! Basic English
Spot It! Alphabet
Spot It! Basic Spanish
Spot It! Numbers and Shapes
and
Spot It! Basic French
These will be available for purchase in August, but you can check them out now with the above links and try them out.
Are you ready for some exciting news?
Blue Orange has agreed to give one lucky winner in the Back to Preschool Giveaway Blast their own Tell Tale Fairy Tales Game. It will be a part of the Grand Prize Pack which is now worth over $300. In addition they will be including a wooden game called CooCoo the Rocking Clown 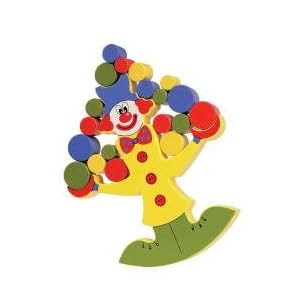 Not only that, they are offering Spot It Jr! Animals to be included in the 2nd Place Prize Pack.
How would you like some extra entries into this giveaway before it even starts?
Either way, don't forget to stop back between August 8th and 25th to enter the giveaway. 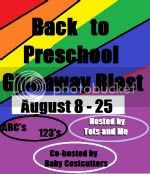