Welcome to another Back to Preschool Giveaway Blast Sponsor Spotlight. The month of July is going to be filled with reviews of some great products geared toward older toddlers and/or young preschoolers in anticipation of the giveaway which starts on August 1st.
(If you would like more information on this event click here.)

"Rock 'N Learn began as an idea that would help children learn by putting educational material to music with a current sound -- the kind of music that kids enjoy and find motivating. Now with over 50 products, [they] have sold millions of audio/book and video programs to teachers and parents throughout the United States, Canada, and other countries.
Rock 'N Learn programs help students learn math, phonics, reading, early childhood, social studies, Spanish, test-taking strategies, writing, and science. [Their] DVDs incorporate music with exciting, colorful imagery.  "
We have enjoyed several of these DVD's this past year. I was lucky enough to win a couple of DVD's at the end of last year. And then I was offered the chance a couple of months later to do a review and giveaway of the Sight Words DVD.  We have enjoyed the music and the learning in these DVD's. I thought they would be a great addition to my Back to Preschool Blast and was pleasantly surprised when I was contacted to review their NEW Sight Words 2 DVD. What perfect timing! I will be dedicating this post to the review of Dance with the Animals (a DVD I figured would be more fitting for the theme of the event), but stay tuned for the Sight Words 2 review.
Dance with the Animals is one of Rock 'N Learn's Early Education DVD's and is suitable for children 2 and up.  This DVD is filled with songs about animals that will get your children up and moving. Children learn the names of the animals, sounds they make, ways they move and places they live through catchy songs with live action and animation. The DVD is divided into sections that focus on different kinds of animals: Pets, Farm, Forest and Zoo. With each different section the children are introduced to some examples of real life animals through song. Children learn along with animated Katie Cat and her friends Rex Rooster and Freddy Fox.
In the first section on Pets they learned:
Pet Care
Sounds pets make in an animated song (where the children were given a chance to make the sounds too)
To move and speak like animals in the Pet Sounds Game and Pet Parade.

In the second section Rex Rooster teaches Katie Cat and the children about Farm Animals:

In the next section Freddy Fox tells Katie Cat and Rex Rooster all about creatures living in the forest, once again introducing them in song.
They learn about Forest Animals' homes and participate in the Forest Frolic.

Lastly it is explained that some animals live in a zoo so we can go and watch them even though they come from different parts of the world.
The DVD ends with a Safari Line.
At first my girls just sat watching. 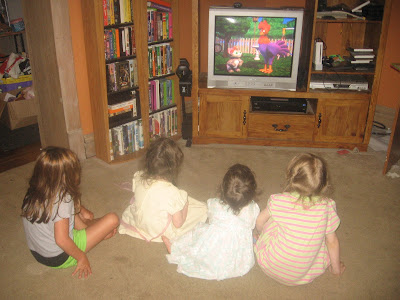 They were captivated, but not really interacting.  I don't know if they think they have to sit while watching movies so they won't get up and participate, but with a little encouragement they joined in. 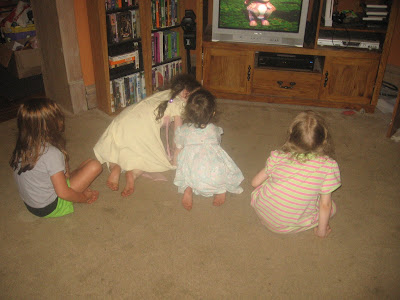 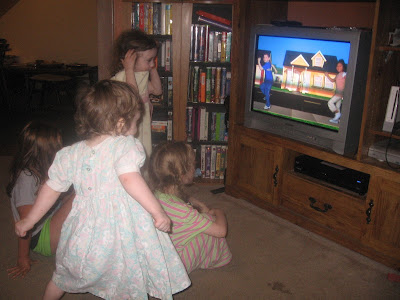 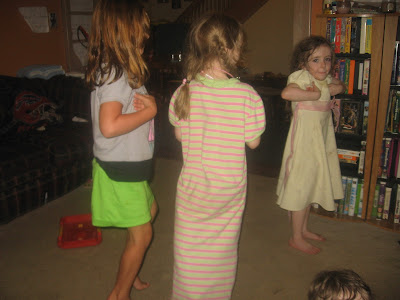 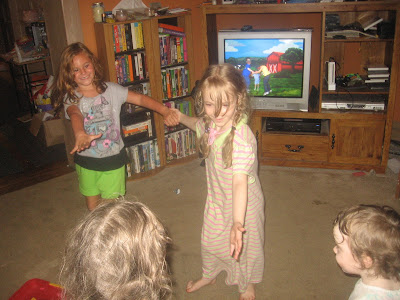 I think this DVD is great for teaching children that animals live in different places, make a wide variety of sounds and move in different ways. I love the way live animals and children are included with the animated scenes. At first Amelia complained it was too long. That was before I encouraged them to join in. She was then the one moving around the most.
This DVD also includes bonus material: Make the sounds of farm animals and Where are the Farm Animals. I have to admit, I didn't realize that until I started writing the post, so I will have to have the girls watch it and see what they think of it. I will edit the post with their thoughts.
There were a couple of things that I wanted to mention.
There were a few times when the animated animals were marching in line across the screen that the ground and background are moving the other direction. For some reason, at times, it made me a little dizzy and seemed to be moving at the wrong pace.
I also wish they had been able to include a larger number of animals. I realize this would have made for a longer DVD which wouldn't be the best for young children. But if each section (Pet, Farm, Forest, Zoo) was a separate chapter they could be watched at different times.
Obviously these are minor things and didn't bother the children.
I think this is a great DVD and highly recommend it.
Are you ready for some exciting news?
Rock 'N Learn has agreed to give one lucky winner in the Back to Preschool Giveaway Blast their choice of DVD or CD. It will be a part of the Grand Prize Pack which is now worth over $300. Not only that, if you don't want to wait until the giveaway, you can head over right now and use this coupon code JQ7711 for 25% off DVD's or CD's on the Rock 'N Learn Site.
How would you like some extra entries into this giveaway before it even starts?
Either way, don't forget to stop back between August 1st and 18th to enter the giveaway.

Email ThisBlogThis!Share to TwitterShare to FacebookShare to Pinterest
Labels: Back to Preschool, sponsor spotlight