We had the awesome opportunity to review the movie Captive, starring David Oyelowo and Kate Mara. I had never heard of this account before receiving the email about reviewing this movie, but it is based on a true event that took place in Atlanta, GA in 2005. 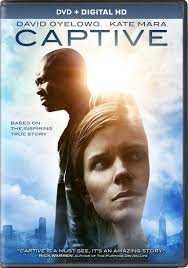 About the movie:
Based on a miraculous story about the power of faith, Captive is an "amazing, inspiring" drama about the spiritual collision of two lost souls, Brian Nichols (Golden Globe Nominee David Oyelowo), on the run from police and desperate to make contact with his newborn son, takes recently widowed mother Ashley Smith (Kata Mara) hostage in her own apartment.  Fearing for her life and desperately hoping to see her daughter again, she turns to Rick Warren's The Purpose Driven Life for guidance.  Ashley and her captor face a crossroads where they discover hope and light in the midst of despair in the moving film that Dick Rolfe, CEO, Dove Foundation hailed as "powerful."

There are over 30 minutes of bonus content on this DVD including Journey Through Darkness: Filming Captive and Faith and The Purpose Driven Life.  Also included with this DVD is a Digital HD copy that can be instantly streamed and downloaded.

You can check out the trailer here.

I do enjoy watching movies that are based on true stories, especially ones that are inspirational. I was a bit unprepared for the intensity of the violence at times. I guess I shouldn't have been surprised, it is a story of an escaped convict who takes someone hostage. Brian Nichols was on the run after pummeling his guard, and shooting both the judge and court reporter in the courtroom. While on the run, he killed two more people and threatened others. He ended up taking Ashley Smith hostage in her own home.

Ashley is a recovering drug addict who recently lost her husband and had her daughter taken from her because she was ruled to be an unfit mother due to drug use. She was trying to get her life back in order, but was struggling. When we first see her she is attending a Celebrate Recovery meeting, after which she is offered a copy of The Purpose Driven Life by Rick Warren. This was sort of interesting to me because we have studied The Purpose Driven Life in small groups at church, and our church has a Celebrate Recovery group. She ended up throwing the book in the trash, but it finds its way back to her later in the movie.

There are quite a few intense, suspenseful scenes after Brian takes Ashley hostage. However, things take a turn for the better when Ashley starts reading her copy of The Purpose Driven Life to Brian (out loud as he commanded her to do). Remember, this is the book she originally tossed in the trash. However, it appears it was God's will she was to have the book, because as she read from it, it began to speak to both her and Brian.

You will have to watch the movie to see how things turned out. Keep in mind, this is a true story that is based on Ashley Smith's book, Unlikely Angel, though details have been changed as is normal for movies that are based on books.

I thought the movie was very well done. I have seen Christian movies where the acting and cinematography didn't have near the same quality. I was quite impressed with the emotion that came through, and the way I was kept in suspense til the end. Even though we knew Ashley was going to make it out alive, seeing as the movie is based on her book, we don't know how the events are going to unfold and it remains tense and suspenseful. You can see the way God's hand is working in this situation. Though I admit, watching the bonus selection "Journey Through Darkness: Filming Captive" made me aware of some subtle things I hadn't noticed while watching. For instance, there is a scene where Brian has taken some meth that Ashley gave him (which she still had stashed away) and is trying to force her to take some too. According to the bonus feature, during this scene in real life, Ashley actually heard God talking to her. I hadn't caught that while watching the movie the first time, but when I rewatched the scene, I could see what she was trying to convey.

During the movie there aren't that many scenes of Ashley actually reading The Purpose Driven Life to Brian. However, it was filmed in such a way that you could see see was making her way through the book, and God was working through the book to soften Brian's heart and to help bring changes in Ashley's life.

This is a wonderfully done movie, full of suspense and God's power. I highly recommend it, however, it is most definitely not for younger viewers. There are way too many instances of shooting and guns being pointed at people, in addition to scenes of actual drug use. Additionally, during the first part of Brian holding Ashley hostage, he has her tied up a couple of times, plus there is a scene of him in the shower (though he is only shown from the waist up).

Now for some great news. I have been given the opportunity to offer a giveaway for 1 lucky person to win a DVD of Captive. 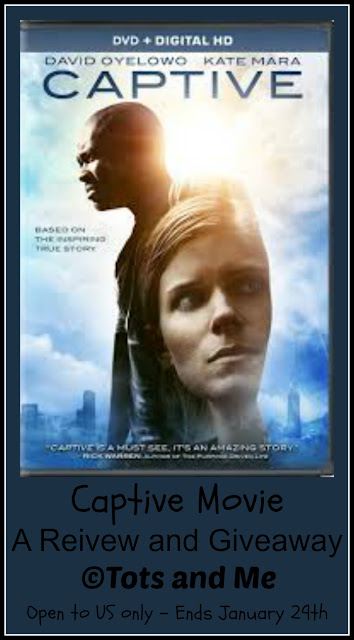 This giveaway is open to US residents 18 and over.
The giveaway runs January 22nd through January 29th 2016.

"Disclosure (in accordance with the FTC’s 16 CFR, Part 255: “Guides Concerning the Use of Endorsements and Testimonials in Advertising”): Many thanks to Propeller Consulting, LLC for providing this prize for the giveaway. Choice of winners and opinions are 100% my own and NOT influenced by monetary compensation. I did receive a sample of the product in exchange for this review and post.
Only one entrant per mailing address, per giveaway.  If you have won a prize from our sponsor Propeller / FlyBy Promotions in the last 30 days, you are not eligible to win.  Or if you have won the same prize on another blog, you are not eligible to win it again. Winner is subject to eligibility verification.”
Posted by kewkew at 2:55 PM