It is no secret that we love to review educational games. I love being able to have fun while seeing the children learn. Over the last few years, I have had a few opportunities to review products from Blue Orange Games. Blue Orange Games have a wide selection of products ranging from Party Games, to Card Games, Family Games, and Brain Games. We have loved every game we have tried out, so I was thrilled when they reached out to me recently with the offer to try out two of their new Super Genius games. I chose Super Genius Addition and Super Genius First Words to review. I loved the look of the games, as they remind me of the Spot It! games we have reviewed in the past. 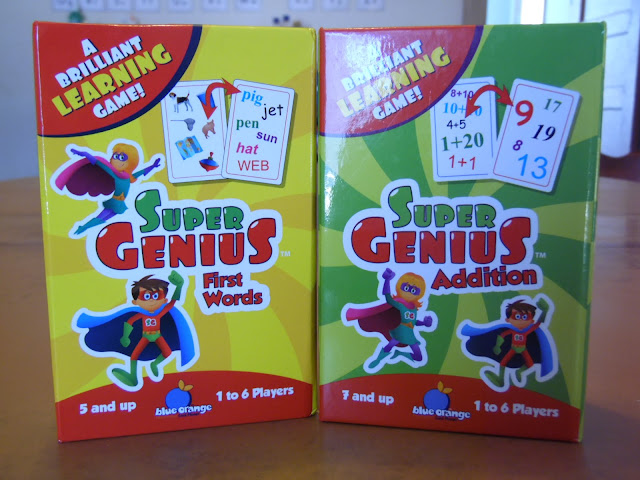 Like in the Spot It! games, the cards are designed so that there is always one and only one match for each pair of cards. While there are several different games to play, each one has to do with finding that one match between cards. 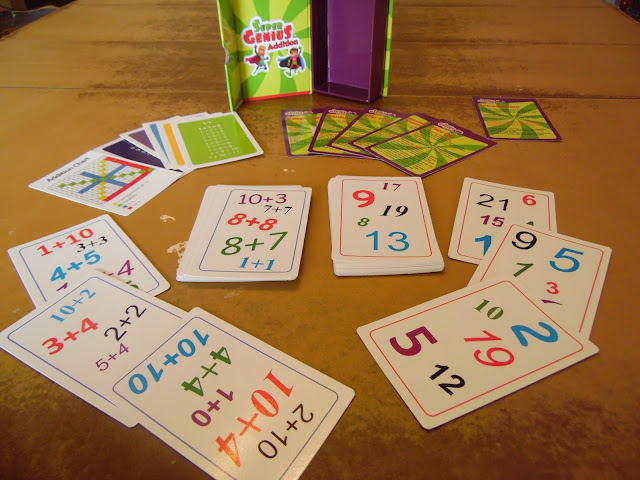 Super Genius Addition is for children 7 and up. I figured it would be a great way for the older girls to practice their addition facts. Super Genius Addition contains two kinds of cards, Sum Cards and Equation Cards. There are a total of 42 cards (21 Sum and 21 Equation) that can be played in a variety of ways. Also included in the deck are an addition chart, addition fact cards for 1 through 10, and instruction cards for 6 different games. 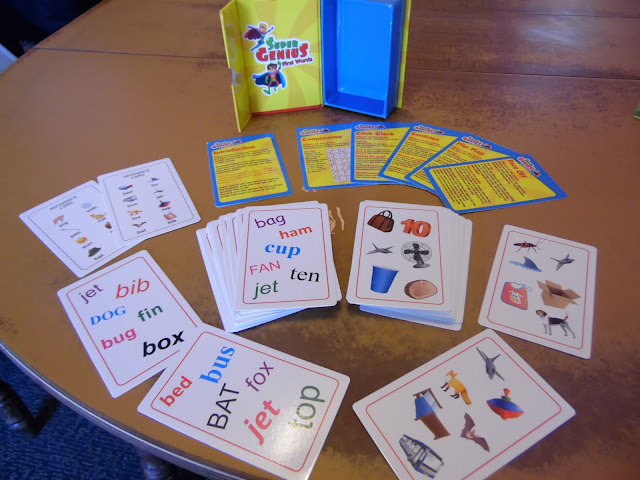 Super Genius First Words is for children 5 and up. I requested this game because I thought it would be a wonderful way for Hannah to practice her reading, plus Harold can match the pictures and the older girls can have fun playing as well. Like the Addition game, First Words contains two kinds of cards. However, First Words has more cards, for a total of 62 cards (31 Picture and 31 Word) which can be used to play the same 6 games in the Addition set. In addition to the instruction cards, two reference cards are included which show all the pictures with their corresponding word.

The cards in the picture below are the instruction cards for the different games. In addition to the ones shown (Cooperative, Click-Clack, Sardines, Flip-Flap, and Face Off), there is one on the back of one of the cards called "Windshield Wipers." 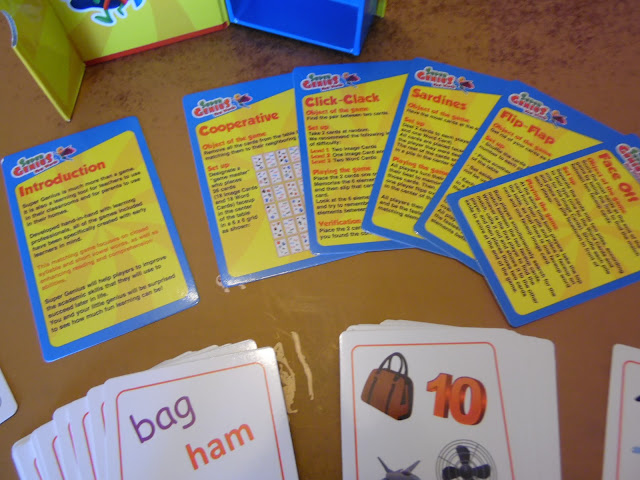 As you can see, the games come with convenient, sturdy, little boxes. There is no lid to lose as it is designed to be a part of the box. The sturdy lid folds around and the little flap is held to the side of the box with hidden magnets. 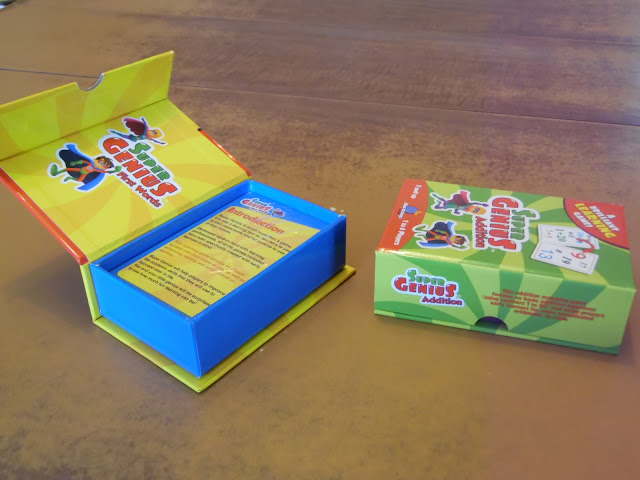 We have enjoyed playing the different games, though I decided to wait for the children to be a little older before we played a couple of them. One of their favorites is Windshield Wipers. In this game, the players are trying to get rid of their cards as fast as possible. Each player gets 8 cards, initially dealt facedown, which are then turned over at the start of play so everyone can see all their cards and their opponents' cards. 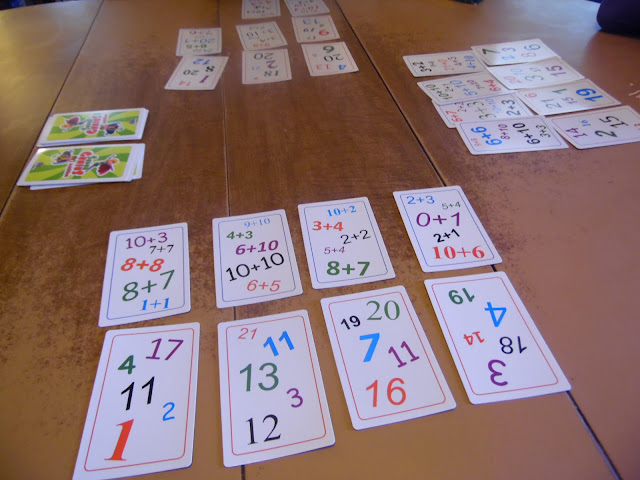 The players try to find a match between one of their cards and one of their opponents. When a match is found, that player puts their card on top of the opponents' card, creating a pile. Play continues until one player runs out of cards. Each time a match is made, if the top card is a part of one of the piles that was made, the entire pile is placed on the opponent's card.

The card pile below is being placed on the middle card as the 17 matches the 7+10. However, you will notice that a match could have been made on each of the other piles as well. I just tell the girls to focus on one pair at a time so they don't get overwhelmed. Sometimes matches are easier to spot because of how the card is arranged. 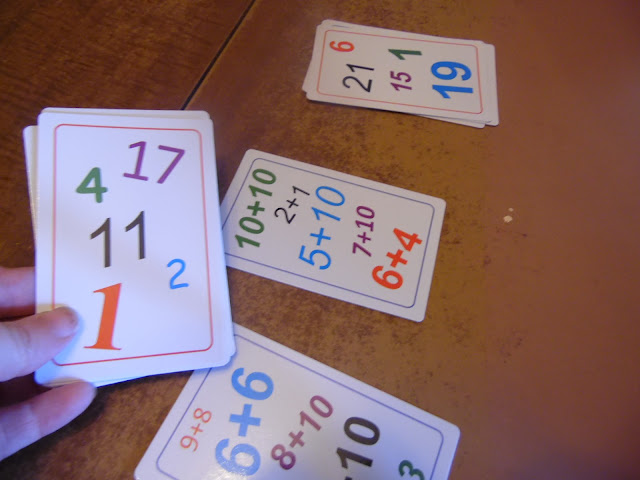 This game can go quite fast, depending on how well the players know their addition facts. As Amelia is still learning hers, I try to rein Tabitha in and have her give her sister a chance to find matches. This is the same situation with the First Words cards, the older girls will be able to find a match faster than Hannah, so I have to remind them to slow down a bit so she can get a chance. 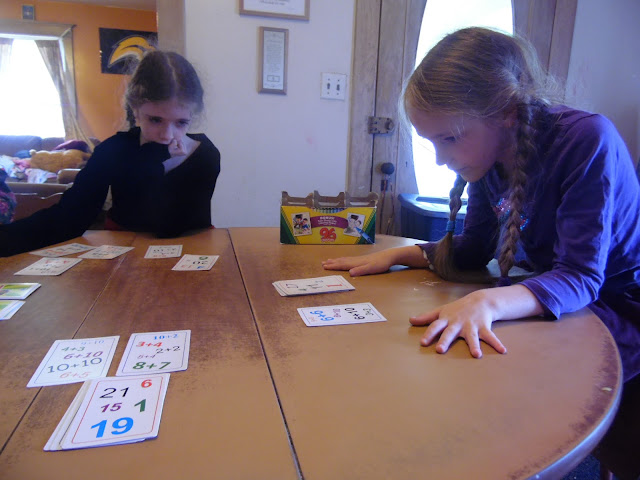 Another game they really like to play was the Cooperative game. In this game, no one person is the winner. They have to work together to remove pairs while making sure not to isolate any cards, as only pairs can be removed. They win if they are able to remove all the cards. 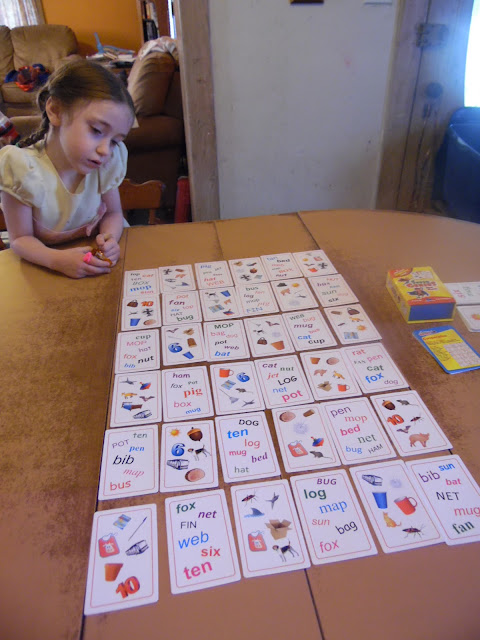 As they can only remove cards vertically and horizontally in this game, they have to match word to picture (or sum to equation) as this is the way the board is to be set up.

As you can see below, there is only one match, the word mop to the picture of the mop. 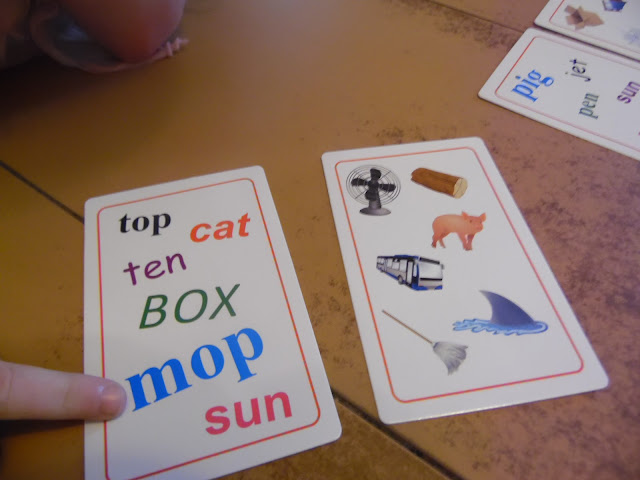 I had set up the cards to take the picture for the review, and it wasn't until we were a ways into playing that I realized Hannah (who only just started reading) was reading the words upside down and doing a marvelous job! 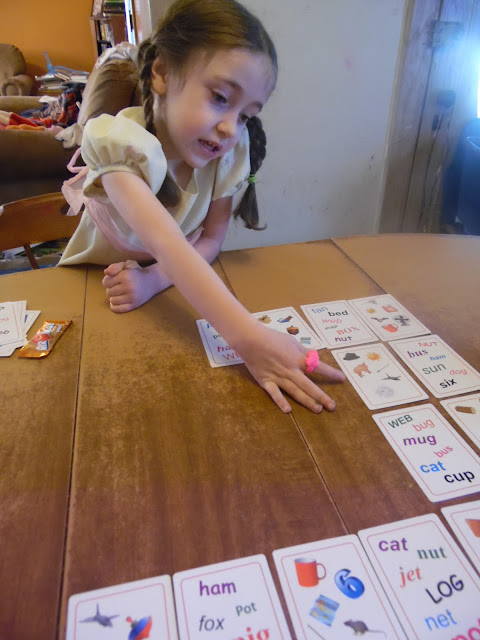 In some games you are trying to be the player to get the most cards, and in other games you want to be the one to get rid of all your cards. I LOVE that there are so many different ways to play.

In Flip-Flap (shown below), each player is dealt the same number of cards and a card is placed facedown in the center of the table. If there are any odd cards out, they are just set aside for this game. The players are to look at only two of their cards at a time and try to find a match with the center card (which is turned face up at the beginning of play). When a match is found, the card is placed on top of the center card, becoming the new card to play off of. Players are to always have 2 cards in their hands and the first one to get rid of all their cards is the winner. 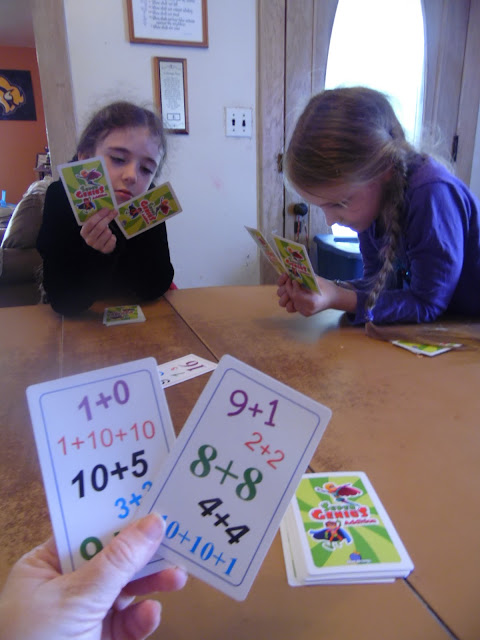 Super Genius is a wonderful way for children to work on their math or reading skills. It is fast paced, which can get frustrating for some children who take longer to find matches. However, I think that gives an incentive to work on their facts and reading skills. I have to say, it definitely takes some thought for children to work out the problems and try to find matches in the addition cards. Once they know the facts, it is easier for them to spy the matching pairs. I love that we can play with just the numbers or just the pictures in some games so the younger children can play (which does make it more like Spot It!, but at least they can feel like they are participating).

I highly recommend these fun games. In addition to Addition and First Words, Blue Orange Games also created Reading 1 and Reading 2, which focus on sight words, and Multiplication. These different games provide fun learning opportunities for children as young as 5, depending on the game.

One of these great Super Genius Games can be yours!

This giveaway is open to US residents 18 and over.
The giveaway runs August 31 through September 14, 2015.

Disclosure: I received Super Genius Addition and Super Genius First Words in exchange for my honest review. No further compensation was given. This did not in any way influence my review. I only recommend products I use personally and feel will be a good products for my readers.
Posted by kewkew at 6:17 PM