It is very important to me that the children have a chance to improve their critical thinking and problem solving skills, because those skills are so important in life. I have been receiving catalogs from The Critical Thinking Co. for several years now and I love perusing their selections. They have so many resources and I was thrilled when we were chosen to review Math Analogies Beginning with the Schoolhouse Review Crew. 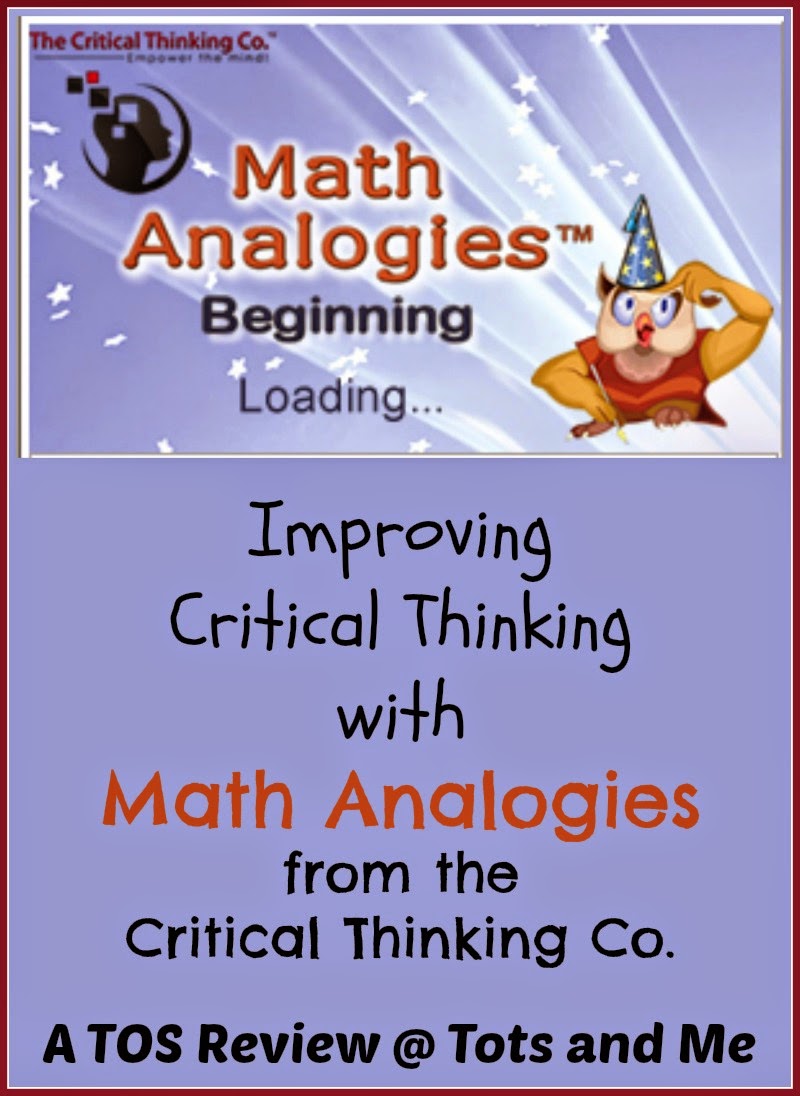 The Math Analogies Beginning we received is a Windows based program, that the children have been able to use on our main computer.  If we had another computer, the license does allow use on 2 computers. This program is compatible with Windows 8/7/and Vista. Our computer tends to run slowly, however, Math Analogies downloaded quite easily and loads from a shortcut on our desktop.
The Beginning level is appropriate for children in Kindergarten through 1st grade. I planned on Amelia being the primary child using this program, though Tabitha has tried her hand in it as well. One of the reasons I jumped at the chance to try out the Math Analogies, is because we are required to administer standardized tests in grades 3, 5, and 8 in Pennsylvania. From my days in public school, I remember analogies being a part of the testing, though I don't really remember "math" analogies.
Just in case you have forgotten (or never knew), here is a little refresher.

According to Dictionary.com, an analogy is "a similarity between like features of two things, on which a comparison may be based."

Further, in logic, an analogy is "a form of reasoning in which one thing is inferred to be similar to another thing in a certain respect, on the basis of the known similarity between the things in other respects."

We are looking at how the objects relate to each other. I was intrigued with how this would work with Math Analogies.

Here are some examples from the program: 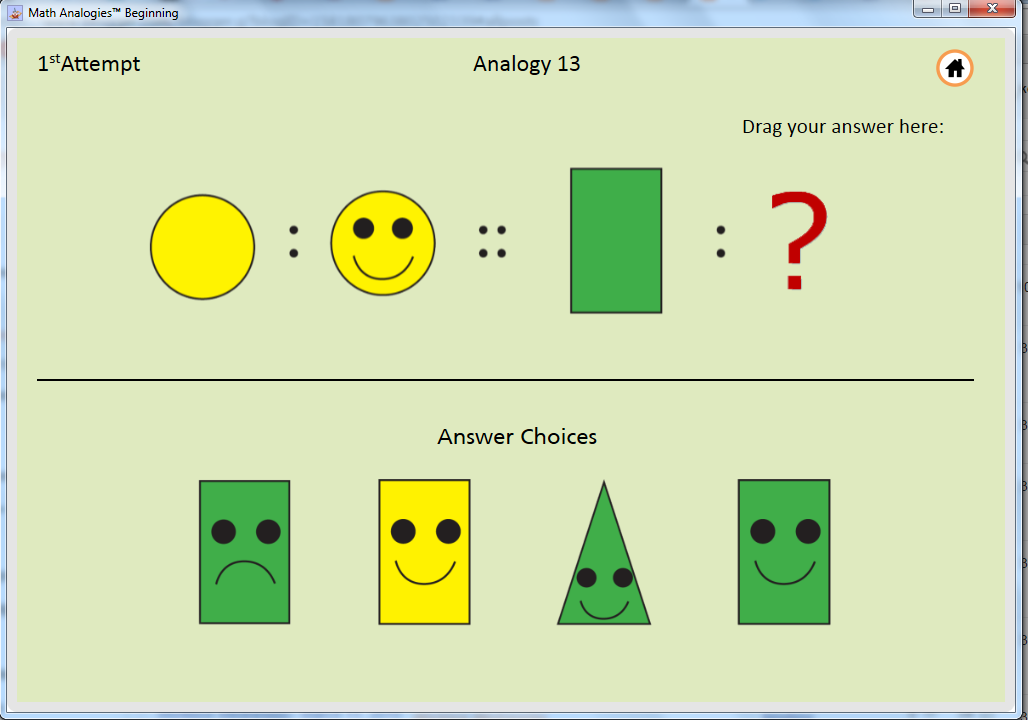 The child is presented items they need to examine. The first step is figuring out how the first two images relate to each other. In the second half of the problem the child is presented with one picture and a question mark. Below the line, there are 4 options to choose from. The child needs to figure out which one makes the most sense in relation to the first two pictures. The image is then clicked on and dragged to the question mark. Exact placement is not required, making it simple to use for children who aren't quite accurate with the mouse yet. 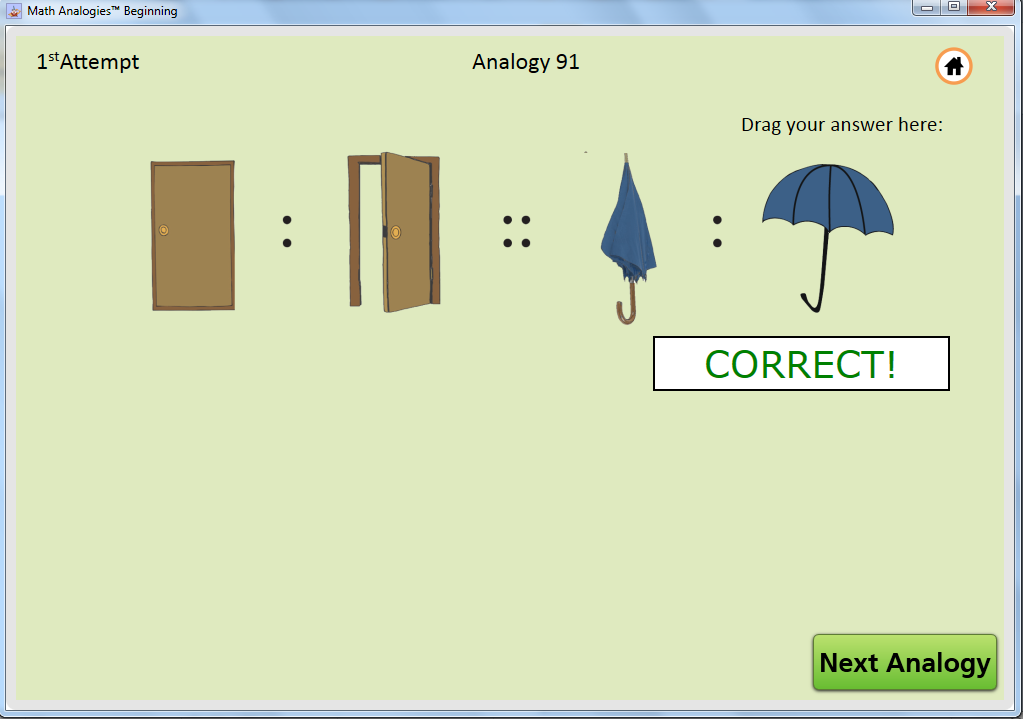 They start out real simple in an attempt to get your child to understand the concept of analogies.  As the child moves through the 152 problems they alternate between difficult and simple.  In the example above, the first object (the door)  is closed.  in the second picture, it's opened.  The first umbrella is also closed.  In order to complete the analogy, you need to pick the opened umbrella. 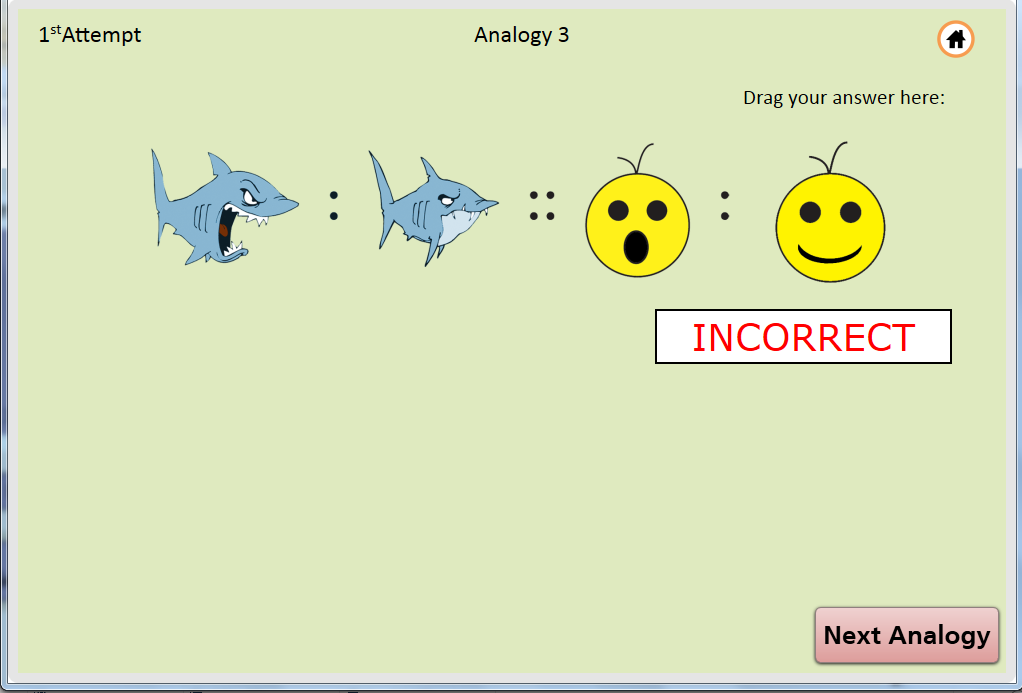 The child receives immediate feedback as to whether their answer was "correct" or "incorrect." As you can see, the remaining answers are removed so the child can not try to figure out the correct answer at this point. Don't worry, there is a reason for this. 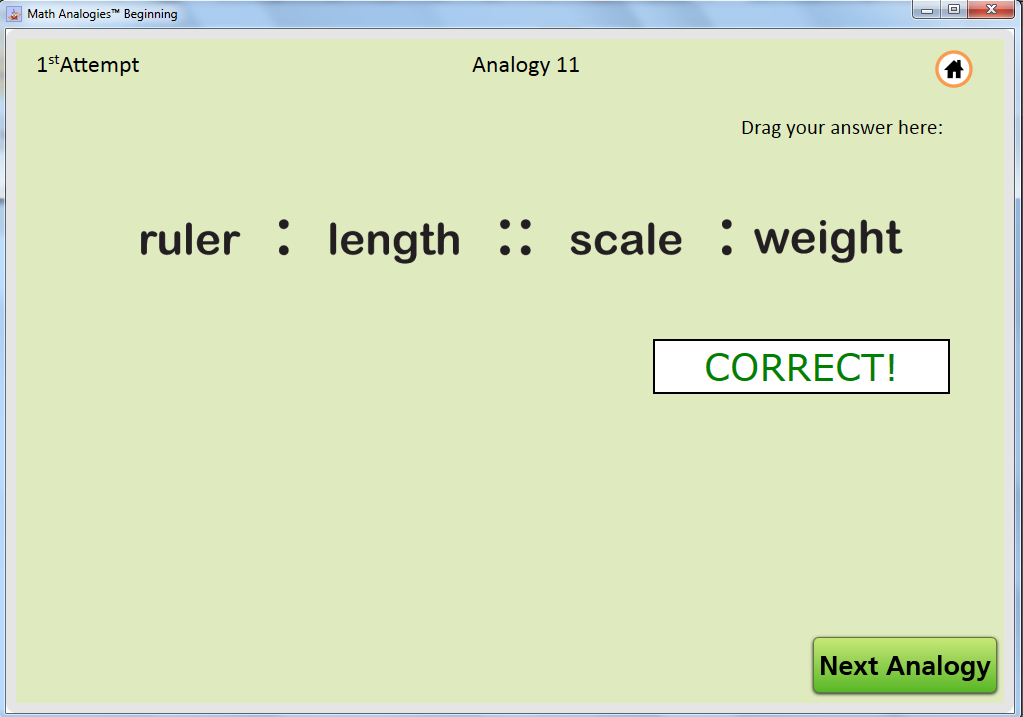 I had mentioned that some problems are more difficult than others. While the majority of the analogies are based around images, there are several problems where they will have to be able to read. As you can see in the above example, the child either needs to know how to read these words (and the remainder of the choices), or a parent will have to help read the words. They also need to have knowledge of what the words mean in order to make sense of the analogies.

The child will focus on such concepts of color, size, placement, direction, time, counting, money,  measurement and fractions in Math Analogies Beginning.

Here are a few of the problems we found the most challenging in this level. Would your child be able to figure out these analogies? 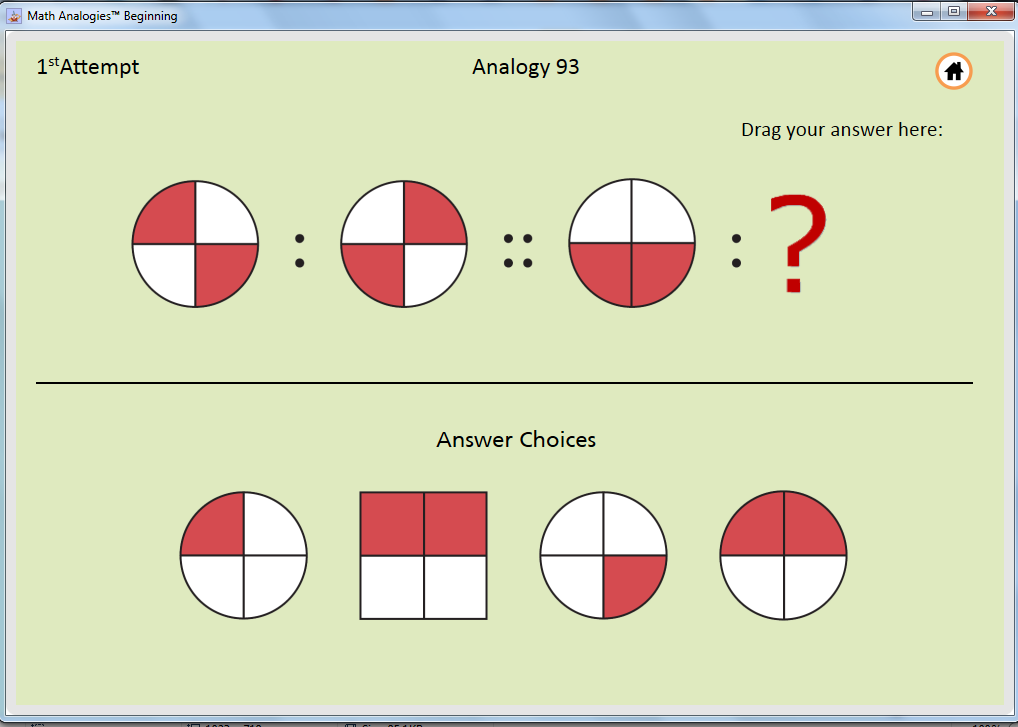 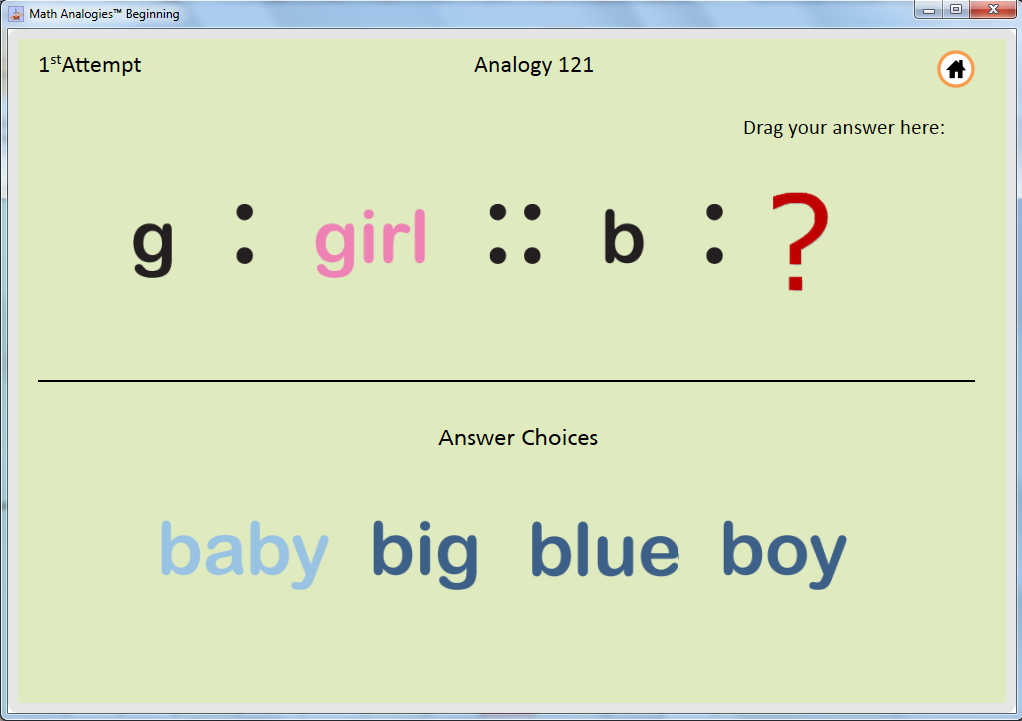 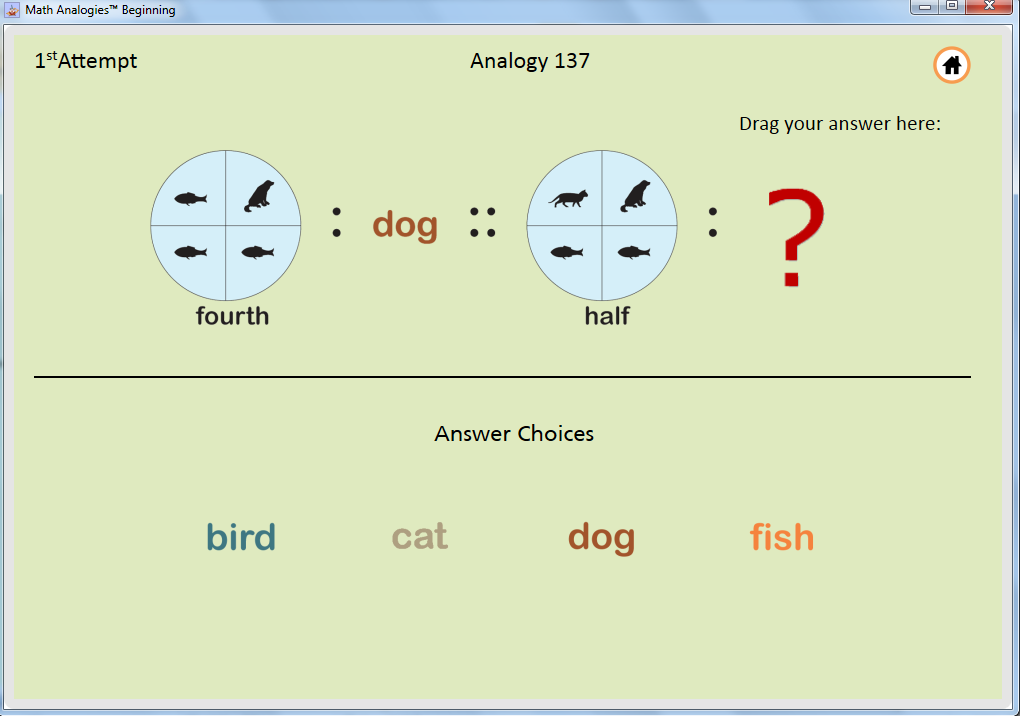 I mentioned that a child does not have the chance to figure out the correct answer when getting the answer wrong. This is because, after all 152 analogies are completed, the child is given 3 more attempts at answering the questions. 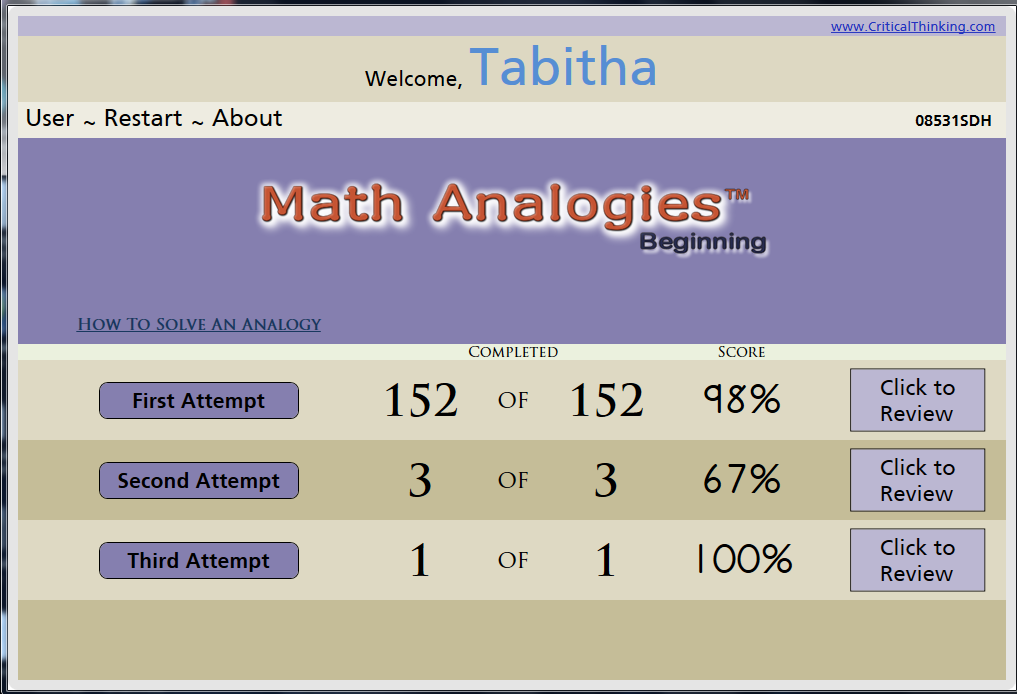 The remaining times through, the child does not have to repeat all the analogies; they only have to attempt the ones they got wrong. If a child would like to go through the entire program again, all you need to do is click "Restart." However, be aware that this will erase all existing data, so you may want to write down which problems were incorrect and what the child's score was.

Math Analogies Beginnings is a wonderful tool that makes learning analogies very easy.  Amelia  was able to breeze through these much faster than I had anticipated.  In fact, she was able to grasp the concept so quickly that I actually had to limit the number of analogies she answered each day. I started out by timing her for 15 minutes. However, she finished almost half of the problems the first day. So, I decided to spread them out a bit. It still only took her about 4 sessions to complete all the analogies. She probably could have finished all 152 problems in a single day if I'd let her.

The wonderful thing about using this program as opposed to a workbook is that they child can restart and redo the the analogies over and over again. Additionally, other children are able to use the same program, just not simultaneously. If you prefer workbooks, they do have Math Analogies Workbooks available. Additionally, there are Apps available for both iPad and Android Tablets.

My fellow Crew mates have been reviewing several different products from the Critical Thinking Co. Some have also reviewed computer programs, others have received physical books. Follow the link below to see the reviews for the following products: