I was thrilled to be given the opportunity to read the latest release from the Bible Belles series written by Erin Weidemann. Several years ago, the children and I had read a couple of the original stories, all of which focused on women from the Old Testament. This new book, The Adventures of Rooney Cruz RINGLEADERS from Truth Becomes Her, continues the story of a young girl named Rooney, but this time the story focuses on women from the New Testament. 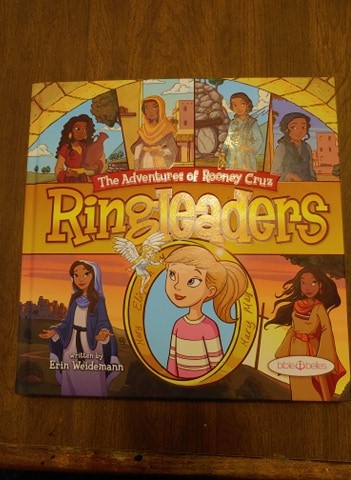 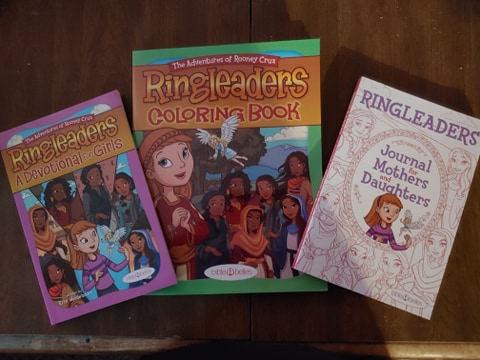 These books work together to help girls realize that God is with them, cares about them, and has a plan for them. In the original HEARD stories, Rooney was given special "powers" from God, powers we can all have. She was guided by the angel Mari and through stories of five Old Testament women to learn about the powers of Prayer (Hannah), Patience (Esther), Bravery (Abigail), Loyalty (Ruth), and Leadership (Deborah). And in this continuation of her story, Rooney is again taken under the wing of the little angel when she is having struggles in her life.
However, while Rooney learned about the Old Testament women through a series of five books, the New Testament stories are told in this 200 page chapter book. Rooney learns about six different women in nine chapters:
As you might be able to deduce from the chapter titles, this story revolves around a play. Rooney and her classmates are excited about their new school year and their new play. However, during the course of the year, Rooney has different concerns she needs to work through, and she needs to learn what God actually wants her to say with these "superpowers" he gave her.
First Rooney is concerned because she has these powers, but she still feels afraid and doesn't have confidence. Thanks to the encouragement of her friend, Dani, and the reminder from Mari, she is able to prepare for the audition. She learns, through the story of Elizabeth, Zechariah, and John, that God will set the stage, or prepare the way. She is then excited about the possibility of having the lead in the play, and quite disappointed when she doesn't get the part. In fact, she is given the role of understudy, which she isn't sure she wants because it seems like it would be a lot of work for the opportunity to just stay backstage and not actually be in the play. It is at this point that Mari shows Rooney the story of Mary and the birth of Jesus. She learns that God's role for our lives may not be the role that we planned for our own lives. And she says, "Yes" to God the same way Mary did.
Unfortunately, Rooney's struggles still aren't over. She has feelings of being an outcast, and learns through the story of the Samaritan woman about Jesus being the Messiah and how he came to save us from our sins. In order to explain what sin was, Mari showed her how God is in charge of everything and when we are thinking of ourselves instead of others it is because of our selfish desires.
And then, after she is content in her role, there is a twist in the story and she finds herself taking on the role of the lead in the play. You'd think she would be thrilled, but she now has new worries. Through the stories of Mary and Martha and their brother Lazarus, she learns that there is only one thing that is really important, spending time with Jesus. But she still doesn't understand how to do this or what exactly God is trying to tell her.
It is right before the play is to take place that she is finally made to understand as she is shown the events of Jesus death, burial, and resurrection. And we see the role that Mary Magdalene had in spreading the good news of Jesus's resurrection to the disciples. It is also at this point that Rooney truly understands about Jesus, and gives her life to the Lord, and is prepared to share the message with those God brings into her life, through not only the words she speaks but the life she leads.
I have to admit, having read a couple of the first books, it didn't really dawn on me that Rooney wasn't a Christian. It also appears that she didn't really grow up in a Christian home if she doesn't even know the story of Jesus. That was sort of a surprise. It almost seems like the story was told in reverse and she should have learned about Jesus and became a Christian and THEN been given the different powers to help her live out her Christian live and share the gospel.
Even though it seemed a bit unrealistic in that aspect to me, I felt that this book did a great job showing the story of Jesus, and how God works in our lives. Helping us to understand our need for him, and his sovereignty over our lives. I do love that this was taught through the stories of women in the Bible. We see how God cares for all of us, even though the stories of the women are usually over looked.
The book itself is of great quality. It is a sturdy book with thick, glossy pages. The are illustrations on at least every other page which help bring the story to life. 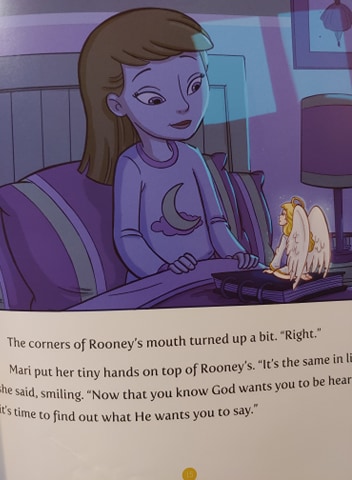 I love that Mari shows Rooney the Bible stories through a window and they don't actually interact with the people from these stories. 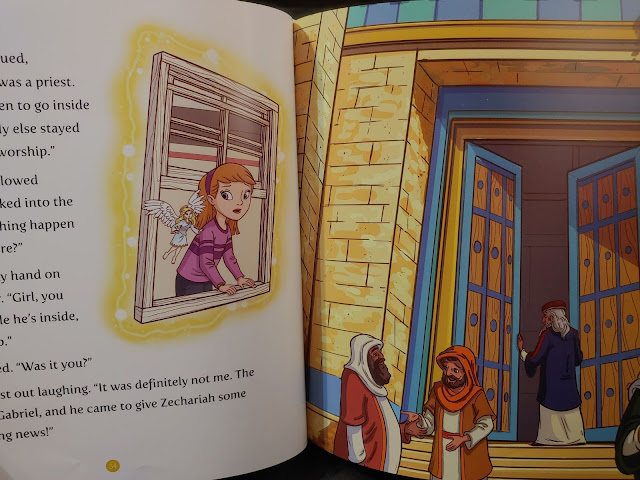 Even though I read the other books to all the children, I had figured this book would be Hannah's. The other girls are a bit old for it now, and Harold isn't really interested. So, I had Hannah read the book independently. 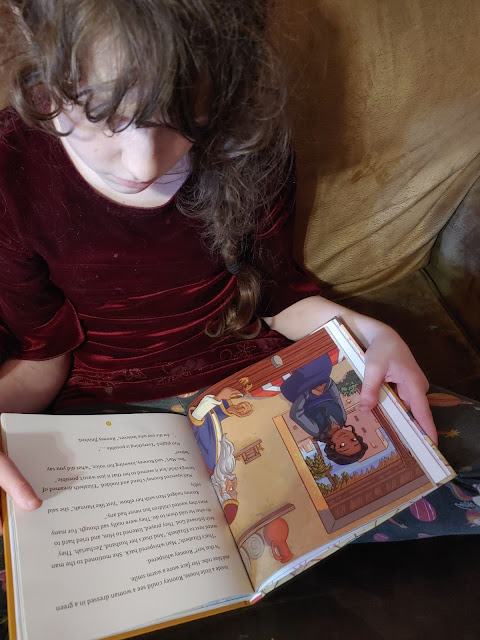 I appreciate that each chapter ends with a Bible verse to help summarize what was focused on in that chapter. 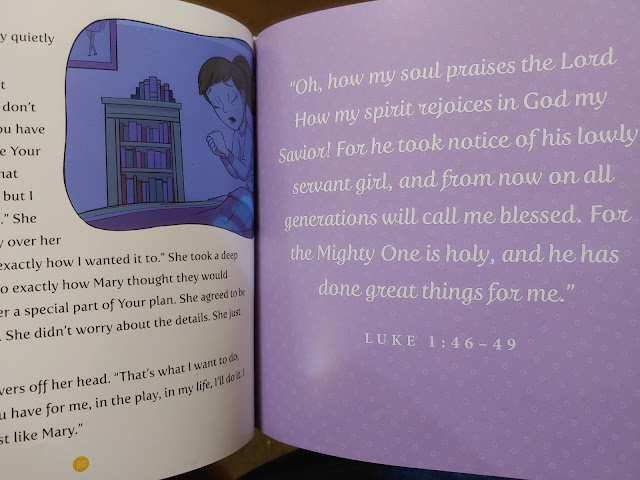 I had mentioned that we also received other books. The devotional and journal fit in with the stories of each of the women featured. I had wanted Hannah to read through the entire story before going back and doing the devotions. 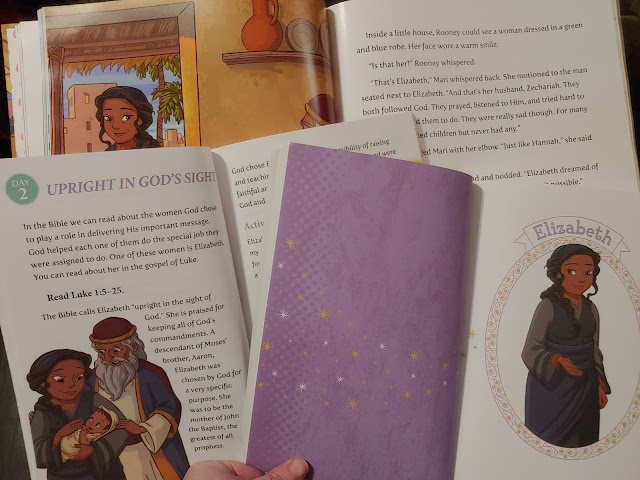 There are six weeks worth of devotions. The first five focus on the women, with the sisters Mary and Martha sharing a week. The final week focuses on Rooney and how the reader learns to share the good news. There is a devotion for every day of the week, which includes Bible verses to read, a reading that is derived from the story, pictures from the story, and activities to do, such as memorize a verse, discuss questions, draw, or write.
The journal is filled with blank lines and prompts for both the mother and daughter to write on. This isn't something I am sure we are going to use as Hannah is not a huge fan of writing, and I don't want this to be a chore for her. 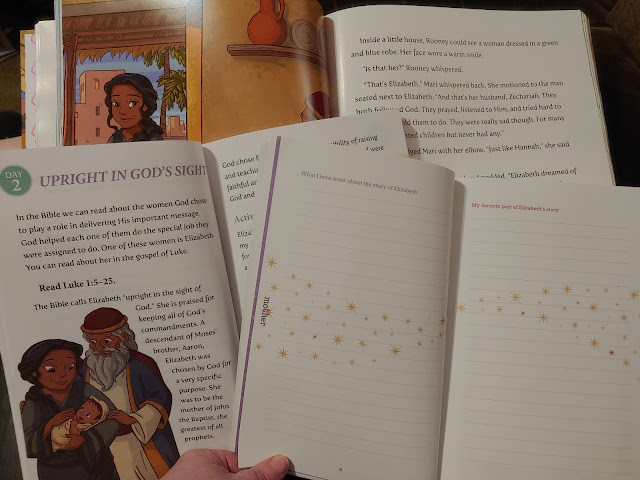 And of course there is the coloring book which has pictures that come straight out of the story. 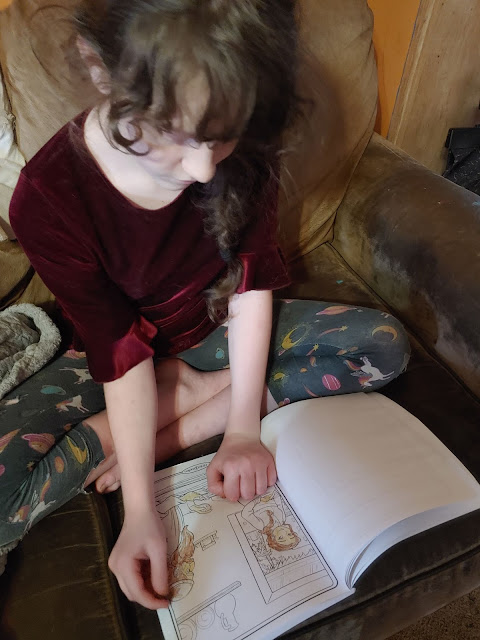 Even though Hannah isn't a huge fan of coloring, I do think it will be a fun activity for her. 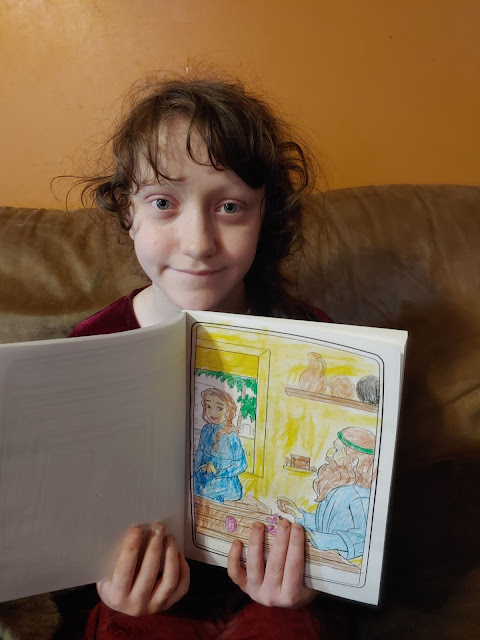 Altogether these books are a wonderful way to share Jesus with a girl in your life. I was thinking it would be a great Advent activity, or a great Christmas gift to then spend the next several weeks focusing on the story of Jesus. I will say,  it was helpful that we had read the previous books, but I can see this book standing along or being read first and then a girl getting to read the stories from the Old Testament.
I highly recommend The Adventures of Rooney Cruz RINGLEADERS for a young lady in your life.
You can find Truth Becomes Her on:
Facebook: https://www.facebook.com/BibleBellesInstagram: https://www.instagram.com/truthbecomesher/
And don't forget to click on the banner below to see what my fellow Crew Mates thought of these great books.