We had the pleasure of being able to review Bible Unearthed thanks to the Homeschool Review Crew. This is a course from Drive Thru History® Adventures that is helping us to really dig into archaeology and the importance of how it helps us to understand the ancient world, especially things from the Bible. 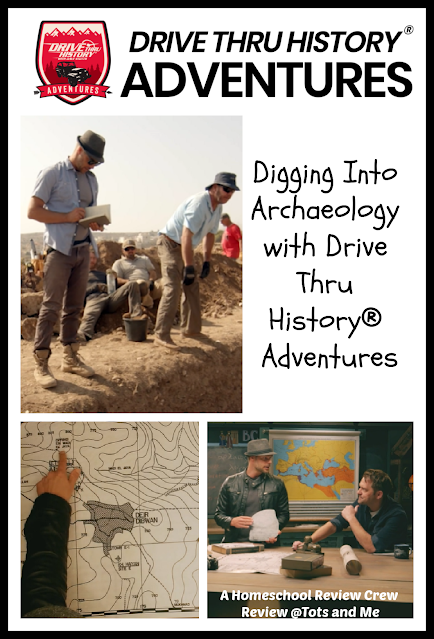 We were granted lifetime access to this 12-part digital series. 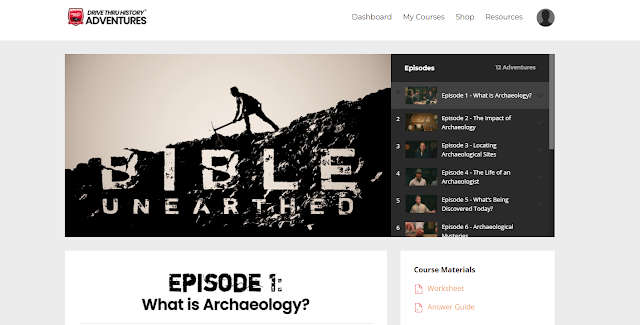 The course is geared toward children in upper elementary grades and older. This means the older girls were the children who I felt would get the most out of it. However, one of the reasons I really wanted to review this course is because I am quite interested in ancient history (I have been since I took a course in college), and I love the thought of checking out the accuracy of the Bible. Another reason I was so interested in this course is because we have watched other Drive Thru History® videos in the past, and have really enjoyed them.
This course features Dave Stotts, who is the host of Drive Thru History®. We loved following on his journeys around the Bible lands. Joining him are Dr. Titus Kennedy, an archaeologist, and Randall Niles who works with Mr. Stotts as a writer of the series. They gather together in their secret lair to teach us through the discussions they are having. They alternate between asking and answering questions, sharing information on a chalkboard, showing off artifacts, sharing slides, and watching videos of Dr. Kennedy in the field.
As they mention in the first episode, when we are watching the Drive Thru History series, we are getting the archaeology second hand. So, they wanted to have a chance to really get into the archaeology itself.
When I first logged into the course, I was able to check out the welcome information and the course guide, which helped me decide how we were going to make our way through the course.
Here is a list of the twelve episodes we are working through:
As was to be expected, they started out by defining what archaeology is. Dr. Kennedy is the teacher in the course, the one with the PhD. So, he is quite serious while giving the lessons. And he goes into details using more technical ideas at times. Such as going into the fact that the word archaeology comes from two Greek words which mean "Study of the Ancient." He then goes on to give a long definition, which Mr. Stotts asks to be given in easier to understand terminology. The definition is ultimately boiled down to, "Digging up old stuff." We had to chuckle at that. Where Dr. Kennedy is the serious teacher, Mr. Niles acts as if he is the attentive student eager to learn, and Dave Stotts is the mischievous one.
We are given a brief look at the history of archaeology. They discuss how it started as people who were treasure hunting or even grave robbing. However, during the Renaissance period, there became a real interest in learning about the past. And the discipline we know as archaeology today was birthed out of these "antiquarians."
They go on to discuss some early archaeological excavation sites, such as Pompeii (which we have learned about in our core curriculum) and Troy (which is the topic of the book that captured Dr. Kennedy's attention when he was younger).
Dr. Kennedy shows us many artifacts. Here he is discussing the Rosetta Stone (of course, this is just a small replica): 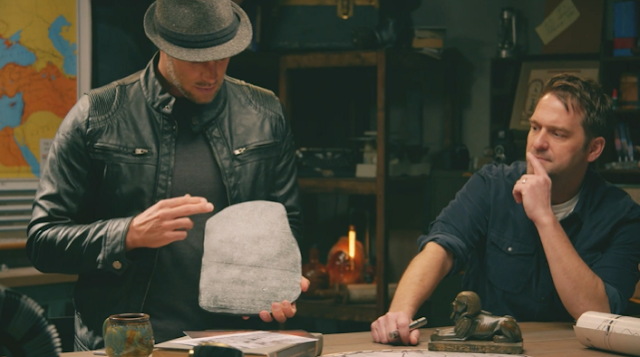 This was fun to watch, because we had studied Ancient Egypt a few years ago, and learned about it, and the importance it had in helping us to understand Egyptian hieroglyphs.
Looking through the slides of some different archaeological sites was quite interesting as well. Some of the places we had learned about, such as Pompeii, Troy, and the Great Pyramids, but we also learned about some new places, such as the Minoan Palace of Knossos in Crete.
Here's the slide he showed us of Pompeii: 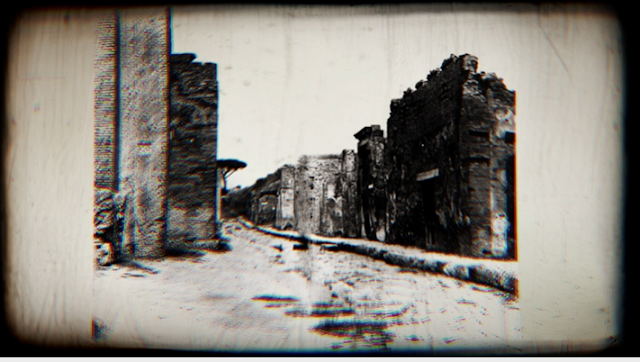 As we have been making our way through the course, it has been impressed upon us that archaeology is so important because it helps us to better understand the historical context of the Bible, and to understand the historical narratives. We can see the reliability of the Bible, which was thought to just be mythology or propaganda. And when archaeologists have gone in, hoping to DISprove the Bible, they have actually found evidence of it being true.
It goes on to explain that archaeology helps to fill in the gaps and illuminate passages. We get to see important inscriptions that prove the people, such as King David, actually existed, and events in the Bible actually happened, such as the wandering of the Israelites around 1400 BC. 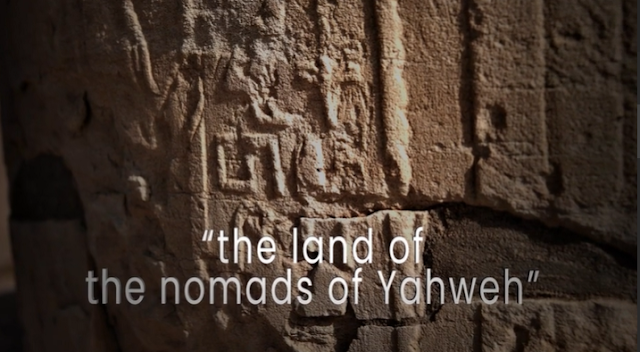 They also show and explain different maps of excavation sites. 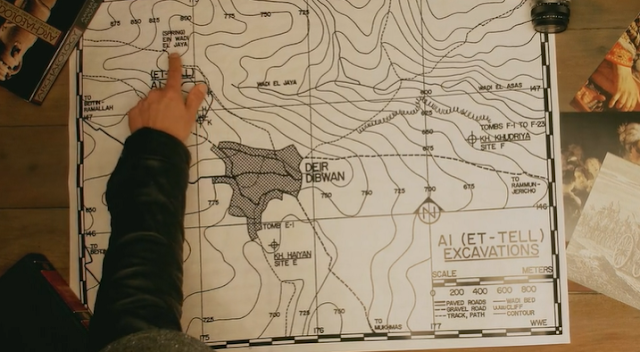 It was definitely quite interesting learning about the specifics that they have to record while out on the field. 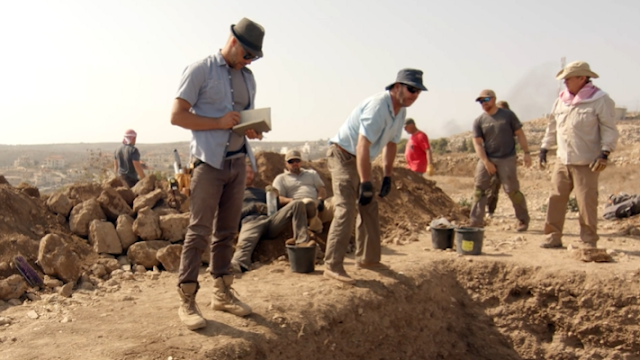 I really enjoyed the clips of Dr. Kennedy out on the field. I think that is because it reminds me more of the Drive Thru History® videos we are used to, with Dave Stotts wandering around in different areas to teach us about them. I admit, this Bible Unearthed course is a bit different than we were expecting, knowing how the other Drive Thru History® series have been. Don't get me wrong, that doesn't mean we don't like this course. It was just. . . different. I do think the children don't have as much interest in it as I do. However, we will continue to make our way through it.
I've really enjoyed learning about the different artifacts found, artifacts that help us prove that the Israelites were in the land of Canaan, and that King David actually existed as an important historical figure. I was intrigued by the finding of royal seals and steles. Proof that the events in the book of Daniel actually happened. I found it interesting that they are still looking for the exact location of Emmaus, mentioned in the New Testament. There is just so much out there that is being discovered, and is helping to confirm, instead of disprove, the Bible.
We aren't just getting to watch these amazing videos though. With the Drive Thru History® Adventures, we get additional resources, such as Dig Deeper articles, and worksheets which include summary information and other details (some not included in the videos), plus questions for the children to answer, Bible passages to read, and optional activities, such as mapping an archaeological site, making a time line, and using geography to locate an ancient site. 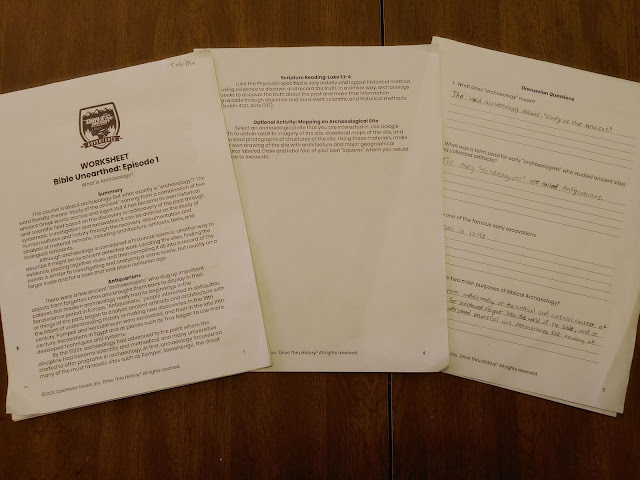 I have been watching the videos with the younger children, but it is the older girls who have been working on the worksheets. I have them watch a video each week, and then they are to read the worksheet information and answer the discussion questions. They have mentioned that they have trouble finding the answers at times, and they haven't really been interested in the Digging Deeper articles, but I have found them quite intriguing.
Amelia has stated that she loves they watching the videos has given her an idea on a story to write. Plus, she said, "we have actual evidence to prove people wrong" when it comes to the events in the Bible.
As we go through the course, I am looking forward to learning about the accidental discoveries and what is left to be discovered.
This really is a great course, and one I highly recommend. However, if you are used to the other Drive Thru History® series, just be aware that they aren't quite the same.
If you haven't viewed any of the Drive Thru History® series, I invite you to read my review of Drive Thru History® - The Gospels.
You can find Drive Thru History® Adventures on Facebook, Instagram, and YouTube.
Don't forget to click on the banner below to see what my fellow Crew Mates had to say about Bible Unearthed.