We had the opportunity to try out a different online math program these past two and a half months. I chose to have Harold and Hannah use Elephant Learning Math Academy, one of our newest review products from the Homeschool Review Crew. Though it can be used by children as young as 2 ranging all the way up to 16 year olds, the older girls chose not to try the program out. I thought we would give it a try as I was curious if it would show me if the children had any areas they were struggling in, plus it was a chance to try something different. 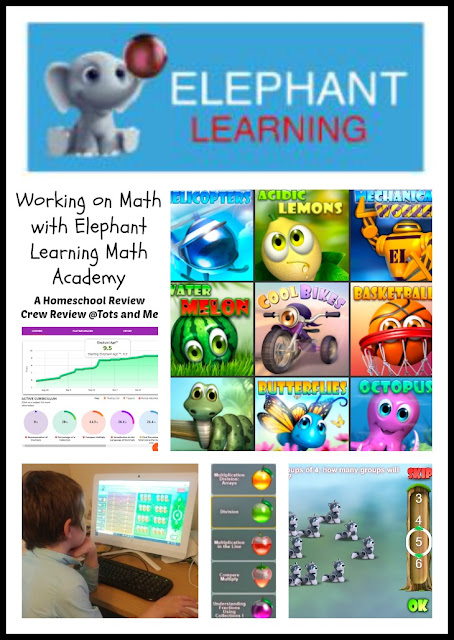 We were given a 12 month subscription to this online program. Elephant Learning guarantees that your child will learn at least 1 year of math in 3 months as long as the program is used 30 minutes a week. Yes, that isn't a typo. They really only require a child to work 30 minutes a week. Personally, I wanted my children working a bit longer, so I wanted them to work 20 minutes a day for at least 3 days a week.

When a child first gets on the program, he or she is assessed in their skills. Though to the child it doesn't look any different than the activities they will continue working on throughout the program.  The student's work is analyzed and the program assigns an Elephant Age to the child and gives the child exercises in the areas that he or she needs to work in.

Let's take a look at what the children have experienced with the program.

Once a child is logged in, they come to their home screen.

This shows an overview of their progress as well as their avatar and a look at how much they have played on the current day. As you can see, Harold's Elephant Age has increased from 5.9 to 9.5 since beginning the program almost three months ago. The circle charts on the bottom right show the percentage complete in each topic the child has been working on.

We can also check out the Playtime Analysis to see how long the child has worked each week. As I mentioned, the recommended weekly time on the program is 30 minutes. Though there were a couple of times the children didn't have a chance to get their work done due to our schedule, their weekly average is still higher than the recommended 30 minutes a week. 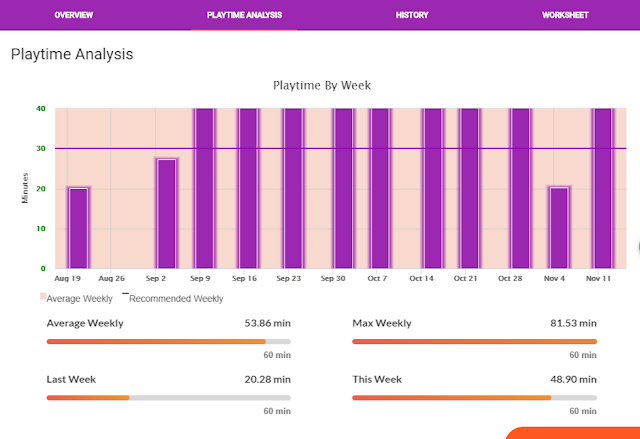 We can also look back on any time range to see how the child performed on every game. 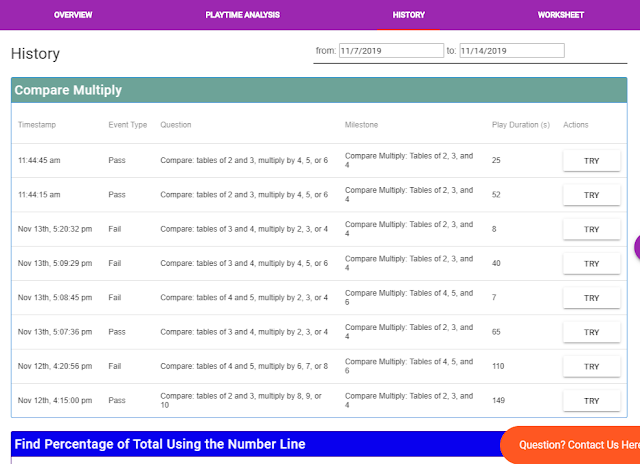 I can go back and see the exact kinds of problems my children were assigned during their time on Elephant Learning. I can see the timestamps, whether the passed, failed, or passed with a milestone, and how long it took them on each game. I can change the range of dates to see the different topics they worked on each week. Which I really appreciate, seeing as the children feel they are always doing the same thing, yet I can see how they have advanced in what they have been working on. For example, when Harold first started, he was working in the following topics:
And this week he is working on:


And when Hannah first started she was working in the following topics:
And this week she is working on:
So, though the games feel the same, they are working on harder skills now than they were when they began.

In order to get to their course work, they just need to click that "Continue Coursework" on the home screen.

That brings them to this screen, where they can choose their theme for the day. 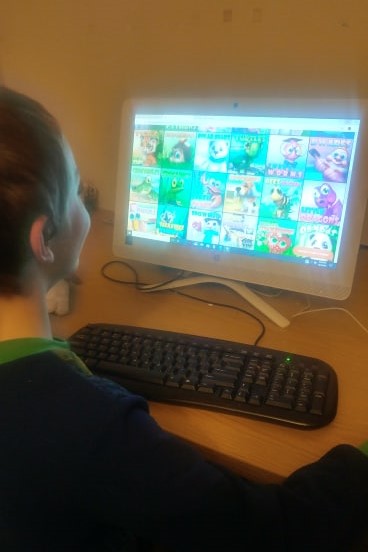 Here's a clearer look at the themes, though it is only a fraction of them.

At first we thought that there would be different activities in the different themes. However, we learned that the activities will be the same, the animated graphics will just change. For example, in the following screenshots, Harold was working in the tiger cub theme.

The games all use the tiger cub graphic in different ways.

Here he just had to click on the spot on the number line he thought was correct and click "OK."

The text at the top helps explain what is being learned.

Even though the next screen shot looks the same, the program had moved on to having Harold work with fractions. I thought this was neat because the student can see the relationship between percents and fractions.

The child can move the graphics around the screen if they need to, in order to figure out the answer. Sometimes Harold needs to move them, other times he doesn't, such as in the following problem.

The program then showed him each group.

The problems get a bit harder as he goes along.

Here's a quick look at a different theme. This is one Hannah was using the other day.

The fruits at the left side of the screen show the child how far along in each subject they are. The fruit will go from clear to filled in.

Though the child can choose which theme to use, they have no control over what activities they are going to work in each day. The program has evaluated what the child needs to work on each day, and that is what they work on. I have noticed, on the "History" information, that if a child fails in a game, they are then given the same game later on. Usually the children pass the next time.

So, what did we think of Elephant Learning Math Academy?

Honestly, I'm torn. I think it is a pretty good program that allows a child to work on topics that need to be worked on. At least according to the way the program analyzes the information. Of course, it can't really take into account if a child is not trying their hardest because they are bored. And, unfortunately, Harold and Hannah have been complaining that they really don't want to use Elephant Learning because there is too much repetition and they are bored. As I have mentioned above, when I looked into what they have been learning, the topics have advanced in difficulty. However, because the "games" are so similar, they feel they are doing the same thing over and over. And when they don't really understand a concept, they feel they aren't getting the instruction that they need in order to fully understand what they are supposed to do.

Have the children been learning. Well, I have to admit they have been, as their graphs show they have improved since beginning the program. Though I do believe they both placed lower than what they should have. I mean, Hannah took her standardized tests last year and was right on, or above, grade level. Yet her graph shows that her Elephant Age was 2 years younger than what she is. I don't know if part of that was that they were skipping problems in the assessment because they figured if they knew it they didn't have to do it, which is the exact opposite of how it is supposed to work. They are only supposed to skip if they don't know the answer. So, it is possible that they began at a lower age than what they should have, which meant they were working on topics on levels they were already proficient at, which would have bored them from the start. I'm not exactly sure. I do wish there was a way to see the results of the specific questions asked in the assessment. It just seems they both started at a lower age than what they should have.

That said, even if they had started a bit higher, I admit they have both improved since the beginning. Harold more than Hannah, as he is now at a 9.5 Elephant Age and he is only 7. Hannah on the other hand has an Elephant Age that is close to her real age.

While Elephant Learning does seem to be a great program where children can improve their math skills, it sadly hasn't been a favorite of my children. There main complaint is that it is boring because of the constant repetition.

Don't forget to click on the banner below to see what my fellow Crew Mates thought of Elephant Learning Math Academy.