One of the subjects that I haven't been consistent in teaching to the children is foreign language. Ever since working at the Montessori years ago, and seeing how well younger children do in learning a foreign language, I knew I wanted to be able to teach them when they were younger, instead of waiting until junior high age, which is how it was for me (and I believe how it typically is). We've worked on it a little here and there; however, with our very busy schedules, foreign language instruction usually falls by the wayside. When the opportunity came up through the Homeschool Review Crew to try out the Excelerate SPANISH Streaming program from Excelerate SPANISH, I thought it would be neat to give it a shot. 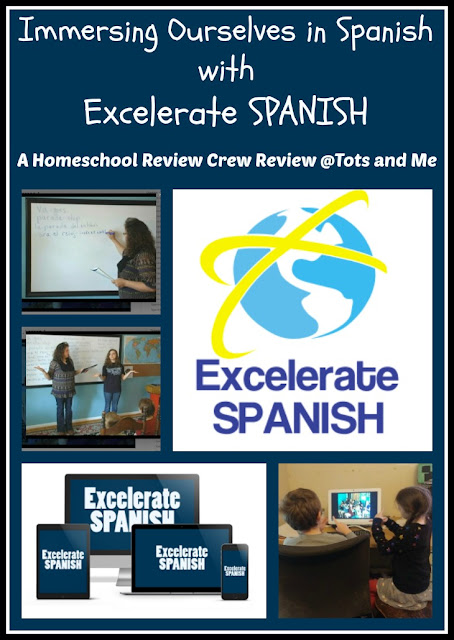 We received a one year subscription to this immersion type program which also includes Total Physical Response (TPR) teaching. There are a total of 48 lessons (24 in Spanish 1 and 24 is Spanish 2). These lessons range in length from 30 minutes to around an hour. Once we were signed up, it was simple to log into the site. 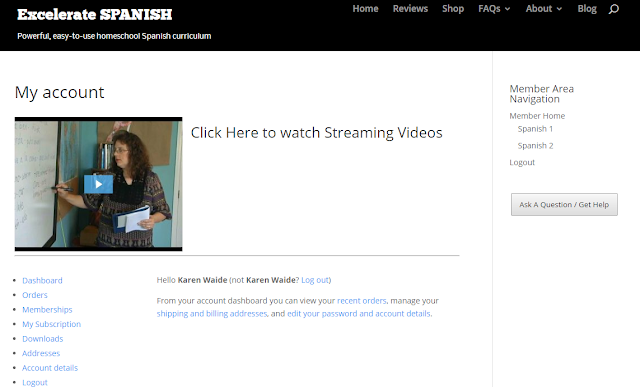 We "join in" with the class of children who are being instructed by the teacher, Caryn Hommel. Caryn just happens to be a homeschool mom herself, and she has taught ESL for years. Now, let me just clarify, though these are called "streaming videos," we are not joining in with the class live. We are watching the recorded lessons.

As we sit at our computer as students in this "class," we watch as Mrs. Hommel teaches us a LOT of new vocabulary. She shares several words or phrases at a time, writing them on the whiteboard, along with the English translation. She does say the words/phrases out loud so we can hear how they are pronounced. 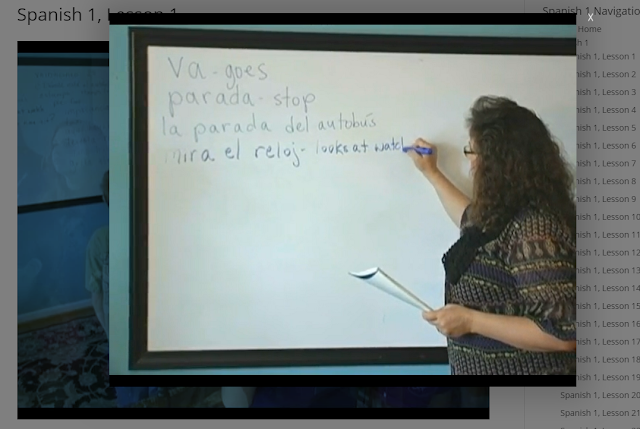 After she is done writing, she puts her book down and goes down the list, one word/phrase at a time, giving us a motion to go along with it. Sometimes there is a picture or an object to point to instead. 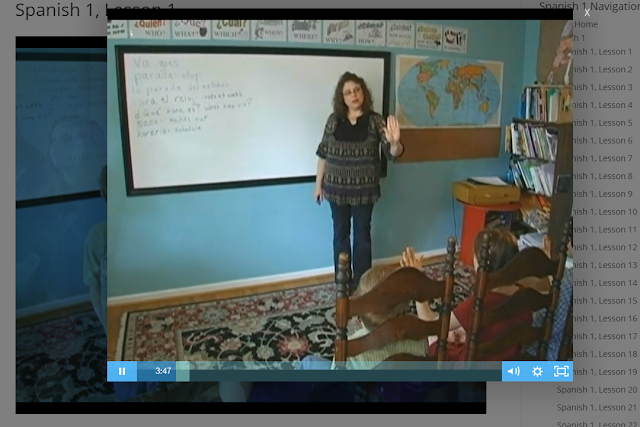 She then asks the children to "show her" a combination of the motions. She asks for them in Spanish. This helps children connect the Spanish word and the motion, to give less emphasis on the English word, so they aren't translating it. Just learning it as they would their native language. You know, like when a baby learns a language, they learn what an object is by connecting it to the word they are hearing. Granted, once children are older, they already know what the English word is, so I'm sure there is a part of their brain that is connecting to the English word as well. I know that is what happens when I try to learn this way, plus when Harold wanted to show me some words, he was showing me the motions, but using the English words because he couldn't remember the Spanish words.

Here are Harold and Hannah demonstrating the motions for some of the words in the "Going Fishing" lesson. The camera angle switched between the teacher. . . 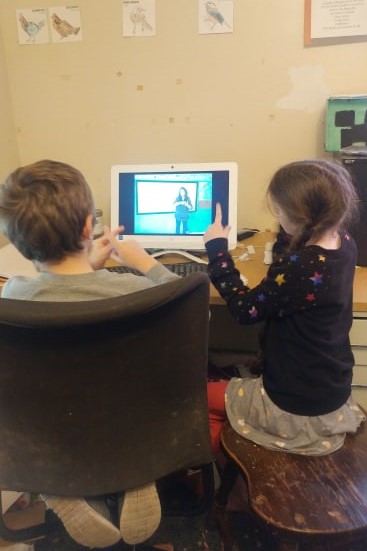 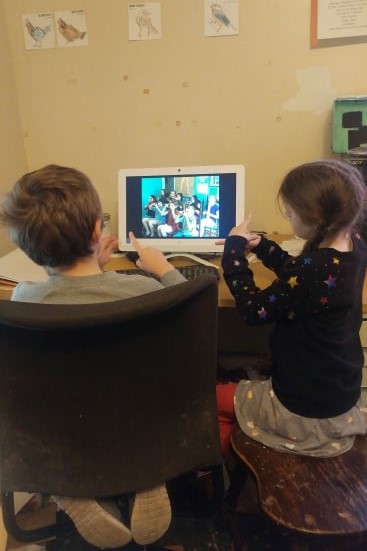 The words they are learning here are afilados (sharp), los ganchos (hooks), and cuidado (careful). 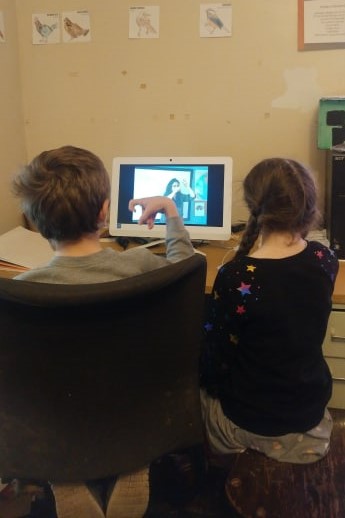 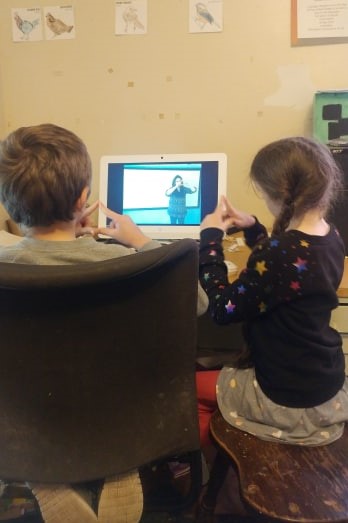 After she goes over the short list she has written out, she adds more to the board, following the same pattern. Of course, as she goes along, she has more and more words and phrases that she can combine for the children to show her.

Then she begins to tell a story with these phrases and she will ask for a student to volunteer showing the words while she says them. 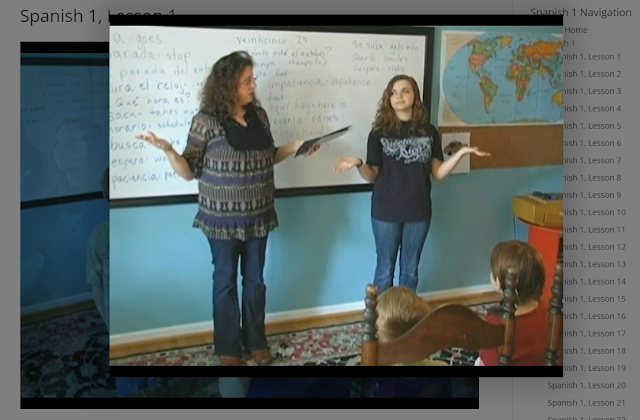 She then asks everyone to join in with the motions. 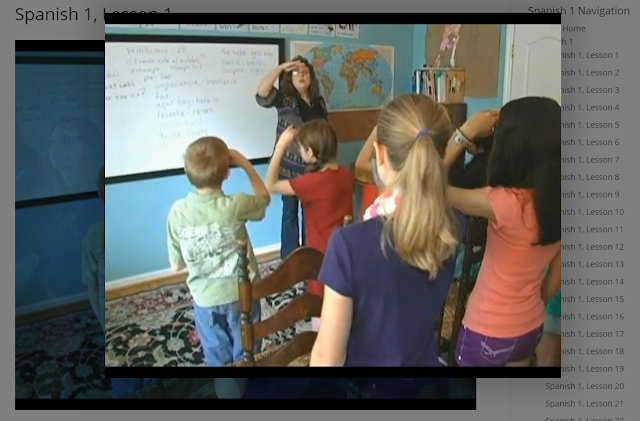 And then they actually act out the story from beginning to end. She has read the entire story to us in English, so we know what is going on, then she does it in Spanish.

In the screenshot below, the boy is playing "Roberto" and the girl is playing "Anna." They have been waiting for a bus and a taxi comes along. Anna was going to get in the taxi, but Roberto runs faster and gets in the taxi first. 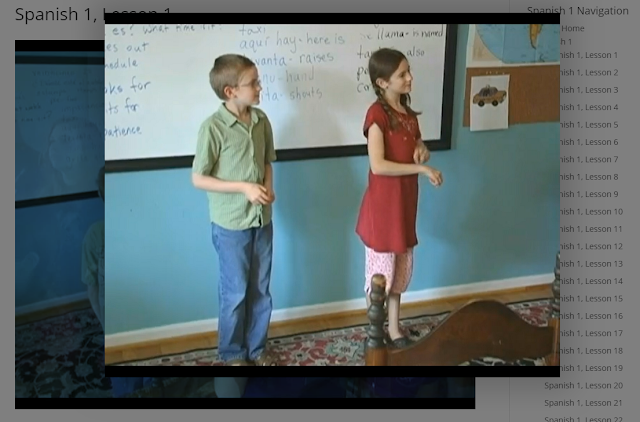 There is also a section in the middle of the lesson, and one at the end, where the children on the video pull out their workbooks to review the material learned. We did not have access to these books as a part of this review. So, we can only listen while they go over it. We try to understand what Mrs. Hommel is saying, but it was quite difficult. I do wish the workbooks had been a part of the review. It was said that the books were optional, but it sure would have been easier to follow along.

The other problem we had, is that, when the teacher was speaking to us fully in Spanish, she was using words we hadn't learned yet. This, of course made it even more difficult to follow along. I do understand that that is a part of the immersion method of learning, but it is very frustrating to me, and as I have learned, it is frustrating to my children as well.

Due to the fact that we are having trouble with understanding and retention, we have been moving very slowly through the program. We definitely need multiple viewings of the video lesson to be able to understand. And, because the lessons are on the long side, we've been breaking them up and watching them on different days. So, we are still only on lesson 2: Going Fishing. Being able to go to the Quizlet site and practice the vocabulary is quite helpful.

Even though we are only on lesson 2, and we know it is going to take us a while to make it through Spanish 1, I did want to share a little bit about Spanish 2.

From what I could tell, it has more of a classroom feel to it, because they seem to be in a real classroom, as opposed to the room which appears to have been in Mrs. Hommel's house from Spanish 1. I'm not sure if she gets into grammar in Spanish 1 toward the end, but it definitely is present immediately in Spanish 2. She seems to follow the same teaching method, of teaching words and phrases and having the children do motions, but when they tell the story, they have costumes. And there are even graphics included in the video.

Things I love about this program:

I love that it is interactive. The children use motions to join right in with the students on the video. The inclusion of Total Physical Response (TPR) teaching is a wonderful way to help children memorize things. We have used motions or sign language since the children were toddlers while memorizing our Bible verses. That added movement really does help make connections in the brain. Honestly, it was what drew me to this program. I was like, "Hey, that's how I like to teach."

We are using quite a few of our senses and types of learning styles while using this program. Movement, hearing, and seeing (both the motions and the words).

I love that the words and phrases join together to tell a memorable story.

I love the repetition. And because we are viewing these, we can watch them again and again, repeating the information even more.

Things I wasn't quite as fond of:

I mentioned that I loved the stories; however I did question the relevance of a story of waiting for the bus and running for the taxi, especially because we live in a rural area, which means we never wait for buses or take taxis. I'm not saying it wasn't a great story with great vocabulary learned. I was just curious as to why Mrs. Hommel decided to start with a less relevant story for children, when later on in the program she has some really cool sounding lessons that would capture children's attention a lot more (such as A Video Game, and A Little Ice Cream).

I was not a fan of the fact that the one character yells, "Stupid!" to the other character after he "steals" the taxi out from under her (so to speak). Definitely not a fan of that word. I was a little surprised the teacher was teaching children to yell that at others.

While I understand that this is an immersive program, there were times we just couldn't keep up with the teacher to understand what she was asking the children to "show her." When she was speaking completely in Spanish, I wish she was just a little slower for those of us who struggle with foreign languages.

All in all, I do like this program. However, it wasn't well liked by my children. Unfortunately. I had to force them to watch, and they had trouble following along and understanding. I do feel having the workbooks would have been beneficial and helped us along. Though I was very thankful for the link to the Quizlet site where we were able to review the vocabulary with online flashcards. There is also a section where you can hear the words being spoken.

Don't forget to click on the banner below to see what my fellow Crew Mates had to say about Excelerate SPANISH.