I decided I wanted the children to work on their handwriting this year. Not only are we working on neatness in print, but we are practicing cursive as well. I've always felt that it is very important for children to learn to write in cursive; however, I haven't been very consistent with it. So, when the opportunity arose for us to use the Easy Peasy Cursive Workbook from Channie's Visual Handwriting & Math Workbooks, I thought it was perfect timing. As the workbook is designed for children in 1st through 3rd grade, I decided Hannah (my 2nd grader) would be the recipient of this review product. 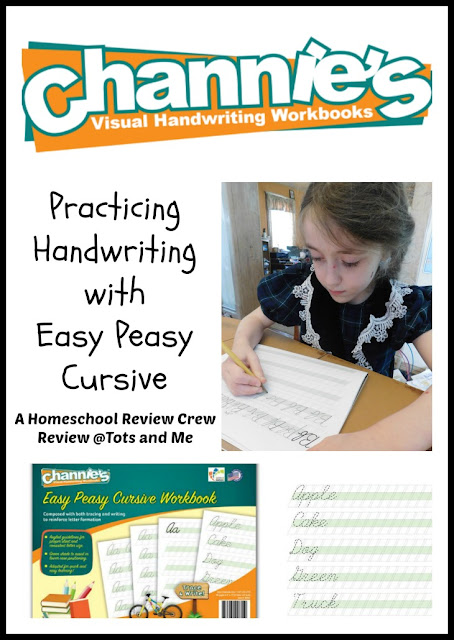 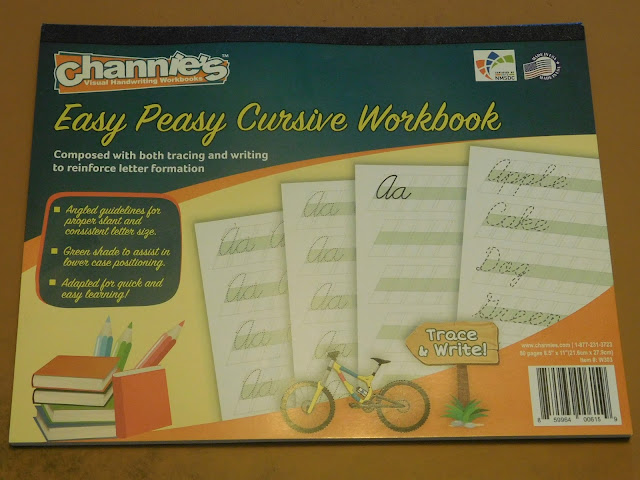 This soft cover book has pages that are 8.5" x 11" in dimension. It is one of several workbooks that Channie's has available. They also have different writing pads and notebooks. All of these products have been developed during these last two years since Channie's was born. As is typical, this company began with a need. Specifically, when Chan Bohacheff realized her son needed something different to practice his writing because he was getting too frustrated with what he was using.

She developed this uniquely designed paper for practicing handwriting. There are three sections for each letter, with the middle section shaded green while the upper and lower sections are white. Each letter is then separated by a small space or divider line. These guidelines are meant to help the child form consistent letters and spaces between the letters. With the Easy Peasy Cursive Workbook that we received, the guidelines are slanted to help the child get that angle needed for cursive letters.

Let's look at a sample page, so you can see what I am talking about. 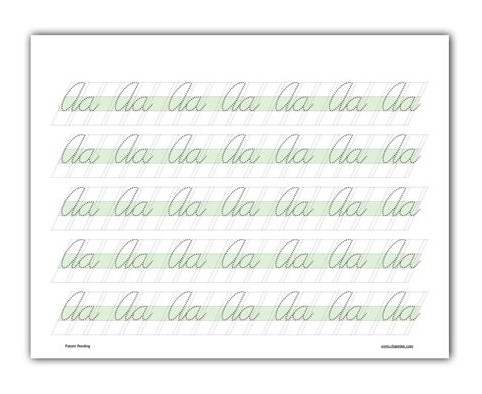 The majority of the workbook is comprised of double-sided pages for learning the letters. Each letter has two tracing pages and one writing page. The child learns the upper and lower case forms at the same time. After all the letters have been introduced and practiced, the child can practice some words on the last two pages of the workbook.

How have we been using the Easy Peasy Cursive Workbook?

Hannah has been easing her way through the book. I don't have her do an entire page in one sitting. Instead, when she first starts a letter, she traces one full line of that letter and then she writes one full line of the same letter. The next time we work on handwriting, she starts by reviewing the previous letters, tracing and writing a few letters each, and then she moves on to her full lines of the new letter. There have been times she was struggling with a letter, so we spent our time focused on that letter, instead of moving on to the next letter. 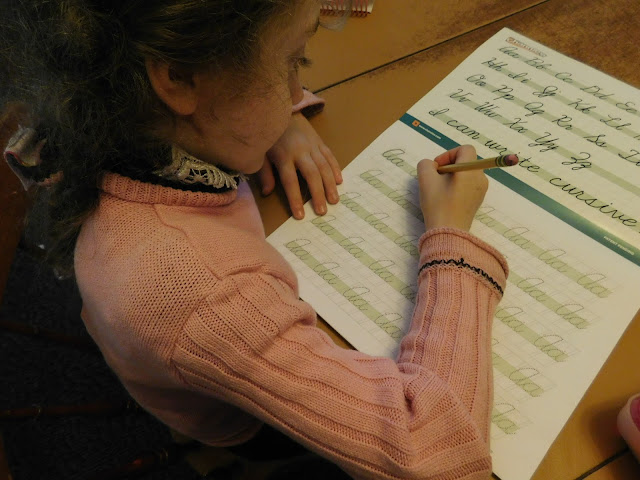 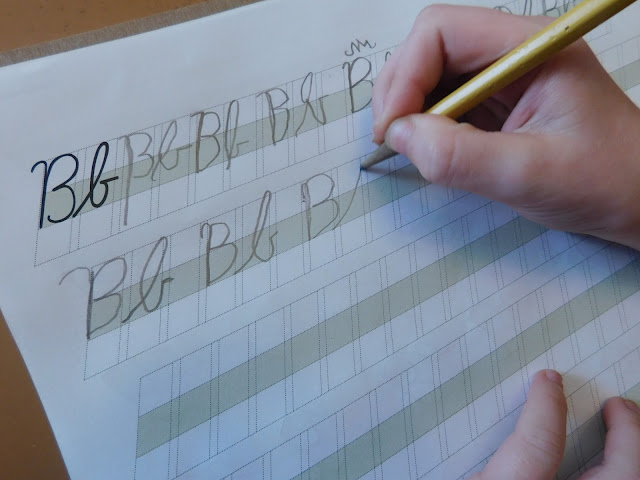 What do we think of Channie's Easy Peasy Cursive Workbook?

I do have to say, it took some time for Hannah to get used to forming the letters and filling in the spaces the exact same way the examples show the letters. While the first tracing page with the dotted letters does have red arrows to show how to start forming the letters, it is only one stroke that is shown. Most of the time it is only the first stroke, but sometimes, such as in the lowercase f, it is a stroke in the middle of the letter. Additionally, there are some strokes where it isn't actually clear how the line is to be formed. Thus it is imperative that the parent demonstrates how to form the letter correctly prior to the child trying it on his or her own. There are a few letters where the formation was a bit strange to me (the lower case e, the upper case H, and the upper case I), so I just demonstrated the way I had been taught to form the letters.

We also hit a bit of a snag when she reached the letter f, which is the first letter to go below the line. For some reason, she wanted to form the entire letter in the two top spaces. 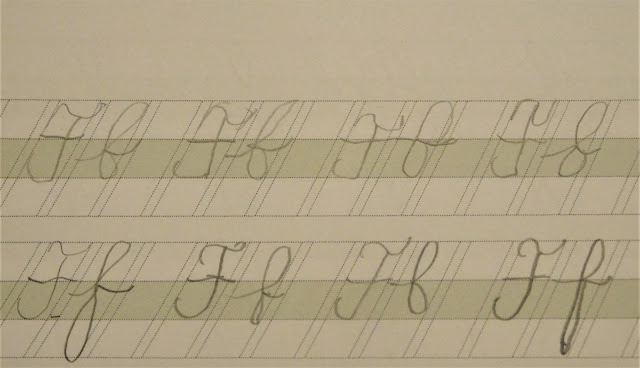 I do wonder if the spaces are too big for her, and if smaller lines would help. The normal handwriting paper that she is used to working on doesn't have such big spaces between the lines. It might also be that she is used to the dotted line separating two spaces and having three spaces is confusing her. I'm not exactly sure what it is, but when I look at the lower case f, it takes me a minute to realize how it would be formed on "normal" dotted lined paper. So, it may have to do with having difficulty transitioning from the one type of paper to another.

While she struggled at first with the spaces, she has begun to get the hang of it now. I feel it does help that we work on a little of each page a day, instead of doing all of one letter before moving on to the next letter. That way she gets to start fresh each day, which is great if she had begun to get frustrated the day before.

One other thing I would like to mention is that I wish there was more practice of word formation. I think it would have been neat if the bottom line of each page had the child using the letters learned to form words. After learning c, the child would have known three letters and could write "cab" for example. In fact, I may just go and add such words in myself, now that I think about it.

All in all, I do think that Channie's Easy Peasy Cursive is quite the intriguing handwriting workbook. It might take a child some time to get used to the different kind of spaces. Or it could just be that Hannah is alone in this struggle. I do love the idea of the slanted lines to help get that correct angle, as that is something Amelia still struggles with. So, if your child is having some frustrations learning to write in cursive, this workbook might just be the answer. And if your child needs more practice, they even sell packs of the specially designed paper.

If you have younger children, Channie's has an Easy Peasy Alphabet workbook for learning and practicing print letters. 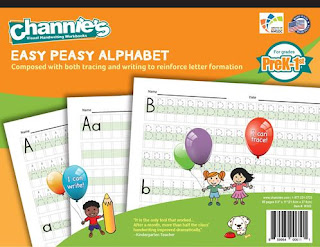 In fact, this was one of the other workbooks some of my fellow Crew Mates got to review. The others are: Quick & Neat Alphabet Pad, My First Letters, and One Page a Day: Double Digit Math Problem Workbook.

You can find Channie's Visual Handwriting & Math Workbooks on Facebook.

Don't forget to click on the banner below to check out all the great reviews of the various workbooks from Channie's Visual Handwriting & Math Workbooks.