Exciting Missionary Drama with The Brinkman Adventures {A TOS Review}

I have mentioned time and again that our family really enjoys listening to audio dramas. The third season of Brinkman Adventures is one of the products that we really enjoyed reviewing a couple of years ago, and we still listen to it from time to time. So, yes, we were thrilled when we found out we were going to get to review Brinkman Adventures Season 4. When our CD set came in the mail we were all set to be entertained and amazed by 12 all-new fictionalized stories of real life happenings showing God's amazing power.  And this season didn't disappoint. We've been enjoying an episode or two (or three) on our journeys here and there for the past month, sometimes even enjoying them while sitting around relaxing in the living room. 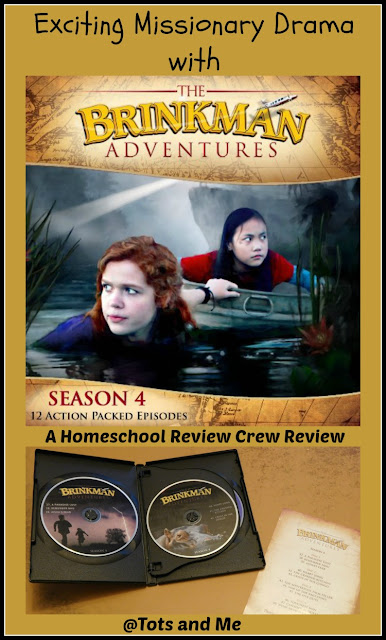 We received the 4-CD set which contains over 5 hours of inspiring stories. These adventures are a mixture of fiction and true life events which occur in the lives of the Brinkman family. This family is actually a fictionalized family based on a real family with ten children. The last time we visited with the Brinkmans they were a family of 11; however, the first episode in this set welcomes the newest baby, Micah, to the family. What's really intriguing to me, is that the children of the real family, the Bultman's, play the children in the stories. 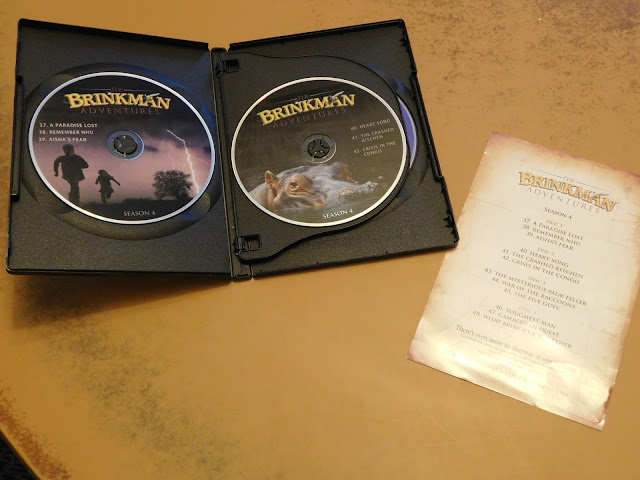 Each of the four discs contains three 26 minute adventures. Here is the list of episodes that we were treated to this time around:
Because some of these stories deal with real life events in the lives of different missionaries, there are times when the story has some tense and/or violent scenes. I really appreciate that there is a warning before such episodes. And after the episodes they will mention whether each story was based on a real story or if it was completely fiction, as "War of the Raccoons" was. While those fictional episodes are fun to listen to, and can be a great break from the intense episodes, I have found that I prefer hearing about God's amazing power and grace that are found in the tales of the missionaries.

This season takes us from a camp in Wisconsin, to Cambodia, over to the Middle East and then back up to Russia. Then we head to Africa for a few episodes set in a couple of different countries. "War of the Raccoons" brings us back to America for that fun-filled episode before taking us back out to an undisclosed country. We then head back to Cambodia before concluding with the Brinkmans in Wisconsin.

Let's take a look at some of these episodes:

Our adventures in Season 4 begin in "A Paradise Lost" with a stay at a camp where the family is supposed to be a part of a fun missionary adventure. However, as sometimes happens in life, things don't go as planned. As they arrive at the camp the dam breaks, draining the lake, destroying the bridge and leaving no way in or out. Which means not everyone who was supposed to attend is able to make it, including the guest speaker. Thankfully there are enough supplies for the families who are already there to not be in any jeopardy. The Brinkmans come up with this grand idea to have a competition which includes a Trust Walk and Bible Translation challenge, which then culminates in a Bible Smuggling event.

During this camp adventure we have some humorous situations, such as when young Peter gets up in the middle of the night and heads to the kitchen to "help" get breakfast ready. There are also some typical naughty moments involving a bucket of water popping up where it doesn't belong and a pair of children spying on the others which gives them an unfair advantage in one of the tasks. And of course there are those tense, gripping moments such as Mrs. Brinkman going into labor a month early, in the middle of an intense storm. And because of a mistake in judgment, there are a host of children running around outside during this storm, refusing to be found by parents. Now, I'm not going to give away anymore details of this episode, which quickly became a family favorite. But yes, everything works out fine and we are reminded that God is in control.

We then move into another favorite episode. "Remember Nhu" starts off at the camp where the guest speaker has finally arrived. Carl Ralston has time for only one of his six sessions, so he tells his story about a search for a young girl in Cambodia who had been sold into slavery by her grandmother when she was 13. Mr. Ralston learns about Nhu while in seminary, during a time in his life when God had been silent. During a presentation he finally heard God speak to him, saying only, "Remember Nhu." He wasn't sure what this meant exactly, but it led him on a two-year quest to not only find this poor Christian slave, but start a safehouse for girls in her situation. What I am about to share is a bit of a spoiler, but I'm not giving any more details. The real Nhu actually plays Nhu in this episode, which wasn't actually planned, but seemed to be a "God thing."

We are then introduced to a friend of Mr. Brinkman's named Nik Ripken (not his real name) who relates some compelling tales of Christians in persecuted countries, along with God's miraculous power in their lives. During the season we hear from him four times. Two of the episodes are also family favorites: "Aisha's Fear" and "Heart Song."

In "Aisha's Fear" a Muslim lady is married to a mean, violent Muslim man who beats her and wants nothing to do with Christians. That is until he is close to death and becomes a changed man thanks to the Christian doctor from the clinic across the street. Seeing her husband change has a profound effect on Aisha, and the remainder of the episode shares her story.

In "Heart Song" we find ourselves in Russia, during the time of the USSR and communism. We learn about Dimitri who desires to teach his wife and son about the truth about God and Jesus. Things take a turn for the worst when a multitude of people in their town end up joining in these teaching sessions. Sessions that end up looking suspiciously (yet unintentionally) like church services. Dimitri is imprisoned yet stands strong for his Lord, until he thinks his family is in danger. He almost gives in, until a miraculous event strengthens him.

Before hearing more from Mr. Ripken we are treated to some stories that take place in Africa. The first one involves a missionary trip to Zambia to help Aunt Sarah reach out to the people in the village where she is ministering. The next two episodes focus on missionaries Glen and Rita Chapman who are sharing the Jesus film in the Democratic Republic of the Congo. A couple of the Brinkmans are along for the ride and are blogging about the adventure.

After that really intense episode called "The Mysterious Palm Feller" involving a witch doctor, it was a nice break to hear about Ian and his robot RD. "War of the Raccoons" is Harold's favorite episode, which is no surprise seeing as there is a robot involved. Also included are paintball guns, mischievous, fish-murdering raccoons, and a police chase centered around the rogue robot, a police dog in training, cop cars, and a boy on his bike.

In "The Five Guys" and "Toughest Man" we again hear from Nik Ripken and see God's miraculous power. The episode "Cambodian Quest" brings us back to the story of Nhu as Mrs. Brinkman and Kitri travel over to Cambodia to help out at one of the Remember Nhu safehouses.

The season concludes with a long awaited wedding filled with drama and catastrophe.

I have to tell you, there are quite a few times when I got goosebumps listening to these episodes and seeing God's miraculous power. Sometimes it seems as if God is quiet in our lives and we wonder where he is. In one of the episodes there was a question about why there seem to be all these miraculous stories coming out of these different countries, but we don't here about them here in America. I liked the explanation suggested, that God "works miracles when necessary to reach people." It is really amazing to me to see how God worked in these lives.

We enjoyed all the season 4 episodes. I really appreciate that each episode has a theme that is being shared. Themes such as "God is in Control," "Persevering," "Overcoming Fear with Love," and "Faithfulness in Work" to name some of them. You can see what the themes are for each episode by stopping by the Brinkman Adventures Season 4 page on their website.

Now, I already mentioned that most of these stories are taken from real-life events. If you would like to know just how much of these stories are dramatized, you can visit the page on the Brinkman Adventures site called Real Stories. Though, if you haven't listened to the episode yet, there will obviously be spoilers. Each of the episodes for each of the seasons have section where you can learn the story behind the story.

And if you would like to learn more about Season 3, I invite you to stop by my review from a couple of years ago. One of these days I hope to get a chance to get seasons 1 and 2, plus I recently learned season 5 has been out for a while now, and season 6 will be out soon. I am sure we have missed some wonderful adventures.

I highly recommend The Brinkman Adventures Season 4. It is a wonderful audio missionary drama to share with your families. Godly principles are taught through the stories, and you can see how God is still working in the world today.

Don't forget to click on the banner below to see what my fellow Crew Mates had to say about Brinkman Adventures Season 4.