Adventure-Filled Christian Fiction for Kids with Imagine . . . The Great Flood {A TOS Review}

I love books. I could sit and read forever. I love that my children love books. And I love when I find new books for us to read together. Especially ones that fit so well with what we are learning in our lessons. This year we are studying the time period spanning from the creation to the time of the ancient Greeks. We just started our school year, so we are right there at the beginning. The first week we studied the seven days of creation, and then last week we started reading about Noah. So, when I learned that a book called Imagine . . . The Great Flood by Matt Koceich, was coming up for review, and we would be reading it right before learning about Noah, I jumped at the chance. I was even more intrigued when I was reading the description of the book and it looked like some sort of time travel would be involved. Thanks to the Homeschool Review Crew, we had the great opportunity to read this new release from Barbour Publishing. 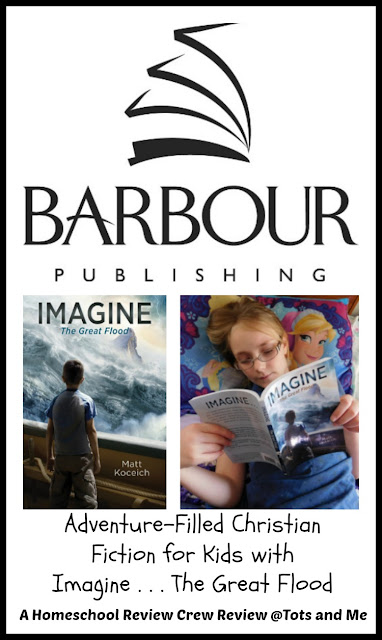 Now, was there really time travel involved? Well, that is never really made clear. Though with a title that includes the word "Imagine," I'm leaning toward the adventure being more in his mind. Nevertheless, the story features a young boy named Corey Max who is ten years old (Tabitha's age) and finds himself on an adventure in the time of Noah. His day started normally, walking to the park with his mom and his dog Molly, to get some exercise in before a big Texas storm hit. Even though this would seem to be a day like any other, it isn't. He is focused on the fact that there is a moving truck in front of their house. It is a reminder that he will be moving across the country, away from everything he knows and loves, and he just can't come to grips with this reality. He knows he should be trusting God, but he is struggling.

His mom uses Molly's trust in them while playing ball, to give Corey an object lesson about the need to trust God and realize that He is in charge and will be with them. The next thing he knows, he is chasing after Molly, heading into the woods, trying to figure out what has gotten her so agitated, when he falls and hits his head. He wakes up to find himself on a hill covered with gravel where he is face to face with two lions, a male and a female (remember the whole Noah's Ark thing). Thankfully, he discovers that these lions don't want to eat him, or harm him in any way. In fact, Corey gets to help Shem, one of Noah's three sons, guide the lions to the ark.

Thus starts his Bible adventure in a land filled with wickedness and danger, from the fierce Nephilim to the evil sorcerer Elizar. He gets to meet Ham, Japheth, and Noah, and even finds himself on the ark, though only briefly. The bulk of the story finds Corey facing trials and dangers as he tries to help Noah's sons get the animals to the safety of the ark, while avoiding the giant Nephilim who are bent on his destruction and ruining God's plans. Along the way he also has to deal with "betrayal" by someone he thought was helping him. Though in reality, Corey had just met the man, and I would say it was more of a deception from the get-go, because to me, betrayals come from those you already know and trust.

Throughout his adventure, Corey finds himself close to death more than once, but it is these trials that help him learn the lessons that God wants him to learn. There are some wonderful messages in this story. At one point Shem tells Corey, "God is a promise keeper, Corey. I have faith in His plans for our lives." Corey also realizes he has been misplacing his faith by placing it in himself, and has not been trusting God and what He could do. There is a point in the story where Corey has been thrown down a 20 foot deep hole. He is afraid and finds himself doubting God. However, he remembers a story told by his great-grandfather, which helps him to trust God to forgive and bless him.

Does Corey survive his adventure? Well, yes he does, but I am not going to spoil the story by telling you how. We do discover that his "trip" back in time has helped him to have a new perspective on life. When we catch back up with him in the last chapter of the book, three months have passed. Corey is happy in his new home, has made friends, and has learned to put his trust in God. There is one last exciting event where we see that his adventure has made a lasting impact and then the story ends.

Imagine . . . The Great Flood is very much a fictionalized account of Noah's Ark. While the story was full of adventure, I do have some reservations. My concern is that so much about the story of Noah and the ark has been convoluted in today's world. There are nuggets of truth told in Imagine . . . The Great Flood, such as the thought that there was no rain at all before the flood (which I've learned about from different creationism ministries) and the Nephilim being real (though in the Bible they are called "heroes of old, men of renown"); however, I'm afraid those things would come out as looking as fiction as well, mixed in with all the other liberties taken with the story. As the reader, it could be difficult to see what is fiction and what is truth.

While we were reading the book during our nightly family storytime, I would pause every once in a while, debating how I wanted to share some of this information with the children. For example, we don't know for sure what kind of wickedness was in the world during the time of Noah, however, the Bible tells us that "every inclination of the thoughts of the human heart was only evil all the time." Genesis 6:5b. We are also told that the earth was full of violence. I guess it is open to speculation whether Noah and his family had any interference by the local people, whether the Nephilim had turned evil, and whether there were sorcerers around.

Luckily we are currently learning about Noah's Ark, so we can try to determine which parts are fiction and which are not. So, I would say, if you are going to allow you child(ren) to read this book on their own, make sure they know that there is a LOT of make-believe thrown in with truth. Use this book as an opportunity to dig into the truths of God's Word.

Though I have my reservations about this story, the children and I did enjoy reading it.

Here is what the children have to say about Imagine . . . The Great Flood by Matt Koceich:

(warning, there are some spoilers below)

Tabitha: "I liked that it had to do with difficulties in life and how people can overcome them if they just trust in God. My favorite part was when Corey got saved by the elephants. It was God who sent them, because Corey told God that he believed in Him. I think that other kids in the world might really enjoy that he goes back in time and experiences things from the Bible."

Amelia: "I like the way it shows how some things can be tough and how it shows that it wasn't easy back in the Biblical times either. It teaches us to be brave and listen to what God is telling us."

Hannah: "I liked that it taught us some of the animals that were on the ark. I liked when Corey got pulled up onto the ark out of the water and was safe."

Additionally, there were what I felt were some inconsistencies in the story. Though they weren't huge, they were things that made me scratch my head when I reread the book by myself when I was getting my thoughts in order for this review. For instance, (watch out for another spoiler) Corey fell down a 20 ft deep hole, climbed up only halfway with the use of the staff that was thrown down to him, which would place him 10 ft down, and yet the elephants were able to reach down with their trunks and lift him out of the muddy hole. The hole that was getting muddy because it was raining, and yet in the Bible it states that God closed the door of the ark before the rains started.

I admit, I expected the book to be a little closer to how it would have played out in the Bible. The Nephilim being evil was a bit of a shock to me, as was the inclusion of a sorcerer. If you are one who doesn't have a problem with events from the Bible being changed up a bit in a fictitious story, you are your child(ren) would probably love this book. There is a LOT of suspense and adventure, but be aware it may be too suspenseful for younger children. The book is meant for children ages 8-12, which I feel is a suitable age. I did read it to all the children (ages 5, 7, 9, and 10), and they had no issues with it. However, when it comes to independent reading, the younger children would be a bit too young. Tabitha was able to finish the book in under two hours. As it is only 110 pages in length, that did not surprise me in the least.

We are looking forward to the new release in this series coming March of 2018. It is called Imagine...The Ten Plagues.

Speaking of Barbour Publishing, this isn't the first time we reviewed a book from this publishing company. It's been several years, but Tabitha really enjoyed reading Diary of a Real Payne Book 1: True Story.

Don't forget to click the banner below to see what my fellow Crew Mates and their children thought about Imagine . . . The Great Flood.