Trust Fund: A Story of a Prodigal Child {A TOS Review}

We had the privilege of reviewing a great movie created by homeschool graduate Isaac Alongi. Not only was I intrigued by the fact that Mr. Alongi was homeschooled, but I loved the idea of a modern day prodigal daughter story. The parable of the prodigal son, as told by Jesus in Luke 15, is such a wonderful story of God's unfailing, unconditional love. I am so thankful that I was able to review Trust Fund by Mapelle Films, thanks to the Homeschool Review Crew, and I am so excited to share my thoughts with you. 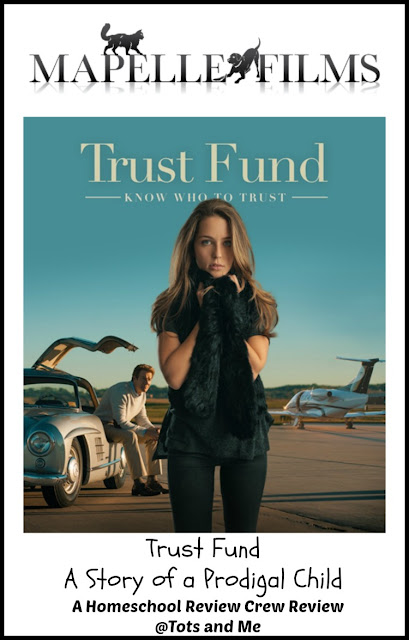 We received a physical DVD which is 1 hour and 47 minutes long. There is a free downloadable 12-page study guide available on the Mapelle Films website under the "tools" tab. Here you will also find four movie clips related to the sections of the study guide. Additionally, some of my fellow Crew Mates received a companion book titled, Love Was Near written by Sandra Martin. This book is suitable for girls ages 12 and up.

The movie begins with a montage of scenes from the early lives of the sisters, Reese and Audrey. You can see how close they were when they were younger. We then move forward in time, to when they are young ladies who aren't quite as close anymore. Audrey is the responsible, older daughter, while Reese is the irresponsible dreamer of the family. Reese has it made really. At least it seems she does, until it is revealed that her finances are in dire straights. She is in the process of writing a book, not interested in getting a job in the meantime to help pay her bills, instead relying on daddy and advances on her book. However, she suddenly finds herself having to take a job that her father offers her in his Chicago publishing company.

It doesn't help that she discovered that her mother left both her and her sister quite a sum of money in a trust fund when she passed away. She feels that she is entitled to this money, and doesn't understand why her father is keeping it from her. After some frustrating confrontations with her sister, Reese ends up stealing her share of the money, transferring it to an account. She then hightails it out of there, headed for Italy where she has a man waiting for her, a man she had previously met and fallen in love with.

Of course, if you know the prodigal son story, you know something is going to happen to cause Reese to lose all her money. Though we do see her spending it on lavish items, she was also trying to be responsible with the rest of it, thinking she was investing it. She naively trusted her boyfriend Milo, not realizing he was involved with illegal transactions. She thought she was helping him, until, with the help of a new friend, she discovers the truth. She is scared she is going to be implicated in the crime, so she runs, however, she is now penniless.

On the other side of the story, we have Audrey who can't understand why her father isn't taking a more forceful stance in searching for Reese to bring her to justice. She feels her father dotes on Reese too much, and is blinded by how she is using him. When Reese finally makes it home, running into her father's loving arms, Audrey distances herself, not even attending the party thrown in Reese's honor. Like the older son in the prodigal son story, she thinks it is so unfair that her sister is welcomed home so eagerly.

Unlike the biblical story, the movie continues on, showing both the consequences of Reese's actions and how the relationships of all the characters evolve. Through it all, we see her father's unconditional love for both Reese and Audrey.

I originally watched Trust Fund alone, because I wanted to make sure there weren't any scenes that would be too mature for the children. Honestly, I was going to watch it with my husband, but he had to work the night we got the movie, and I was just so eager to view it. Though there are some suspenseful scenes, I didn't really find anything that would be objectionable for children to watch. So, we watched it together as a family.

Trust Fund is a wonderful movie demonstrating a father's love. If you are familiar with the Bible story, it is obvious that this story is based on it. However, the message is conveyed in a way that does not shove Christianity in the face of the viewer. That said, it can open up a dialogue with an unbeliever, showing how God loves all, even those who grievously wrong Him.

I love that the story doesn't end with the welcome back party. But we get to see the story play out to it's natural conclusion.There is a love story involved as well. A love story that is almost ruined because of Reese's actions.

This is a wonderful adaptation of the Prodigal Son that the whole family will enjoy.  Tabitha and Amelia even begged to watch it a second time and were quite upset when I told them they had to wait a day.

Don't forget to click the banner below to see what my fellow Crew Mates had to say about the movie and the companion book: