Last week I shared that Blue Orange Games had sent us two amazingly fun games to play and share with you. They are Top That! and Gigamons: 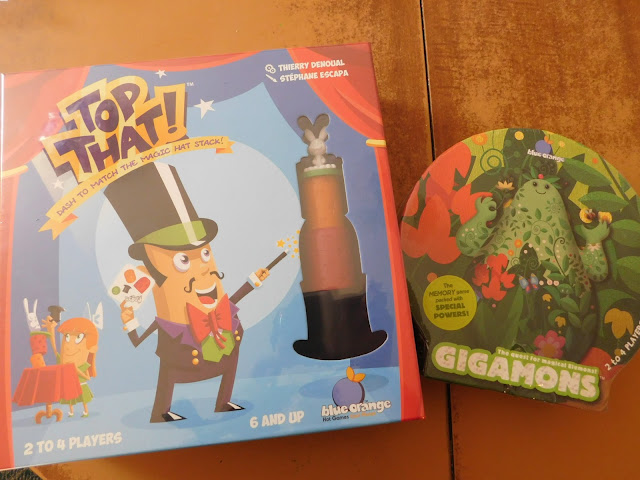 Last week I shared my review of Top That!, along with the giveaway. That giveaway is still live, so don't forget to stop by and enter to win a copy of the game for your family. 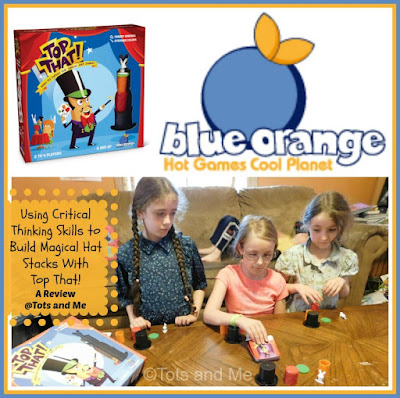 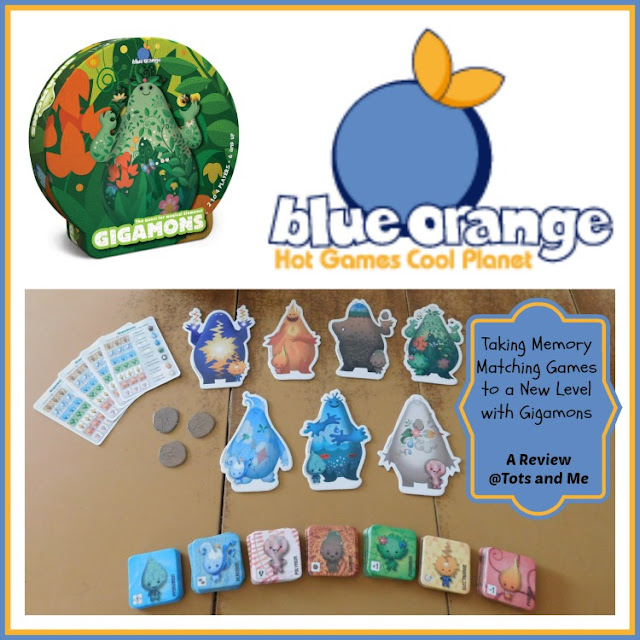 In this game you are on a quest for magical Elemons. These Elemons are discovered while playing what I feel is a great take on a memory-matching type game. When enough Elemons are found, they will become Gigamons. The player who is the first to summon three Gigamons is the winner.

Here, let's take a look at what is included with this game: 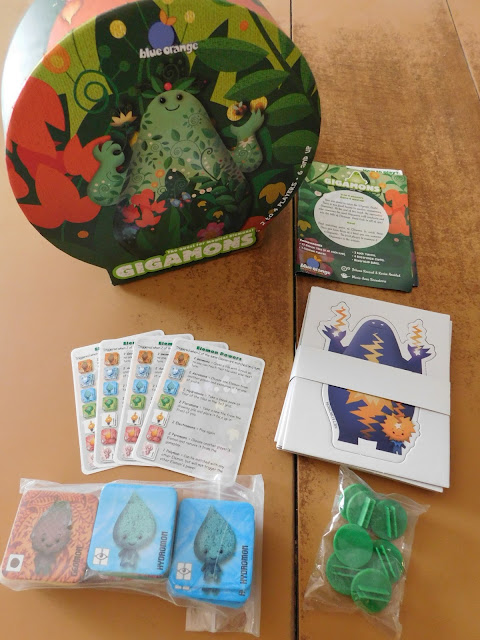 There are: 42 Elemon Tiles (6 of each Elemon), 7 Gigamon Figures with 7 little stands, 3 Rock Tokens, an Illustrated Rules fold out, and 4 Reference Cards. 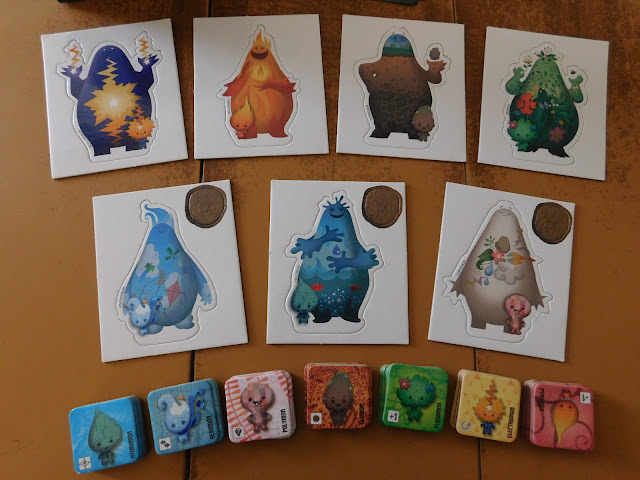 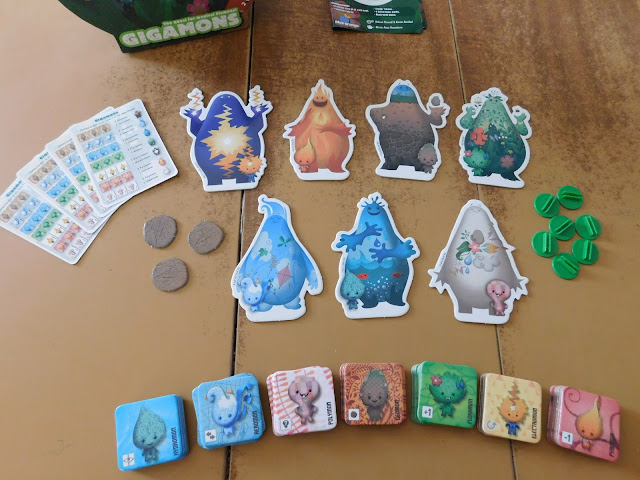 The double-sided Reference Cards are to aid the players in remembering which Elemons have which special powers, and which Elemons become which Gigamons. Each player gets one reference card. 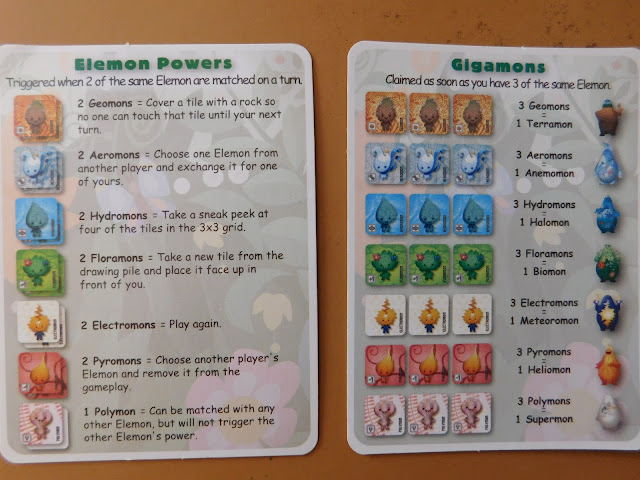 This game is simple to play. The Gigamons and Rock tokens are to be set aside, as they will be needed later in the game. A grid of 9 Elemon tiles is set out face down. 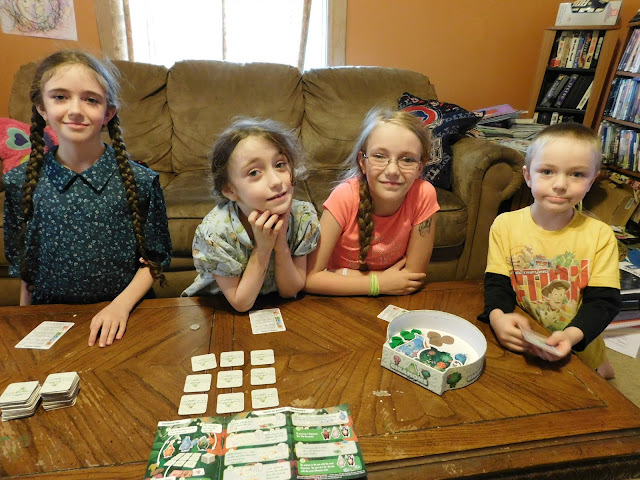 On each turn, a player will turn over two tiles in an attempt to match the Elemons. If a match is made, the player gets to keep the tiles and two more are taken off of the draw pile to replace them. 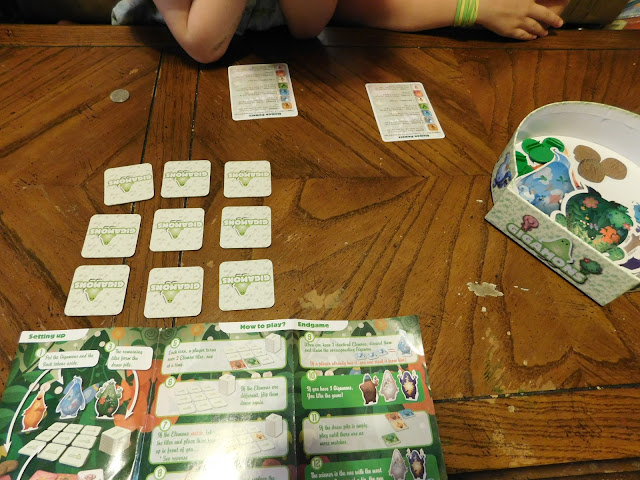 Not only does the player get to keep Elemon tiles, a match triggers the Elemon's power.

This Elemon is Electromon and he allows the player to take another turn. 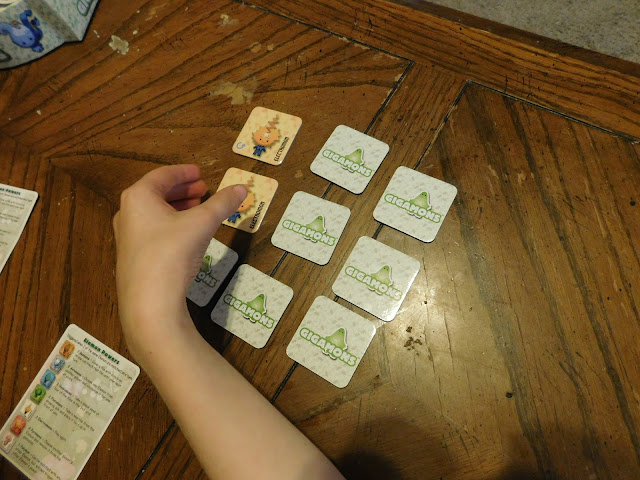 Some other powers include:

Being able to see the future with Hydromon.
(In this instance all the other players close their eyes, so the player can flip over 4 tiles to take a peek) 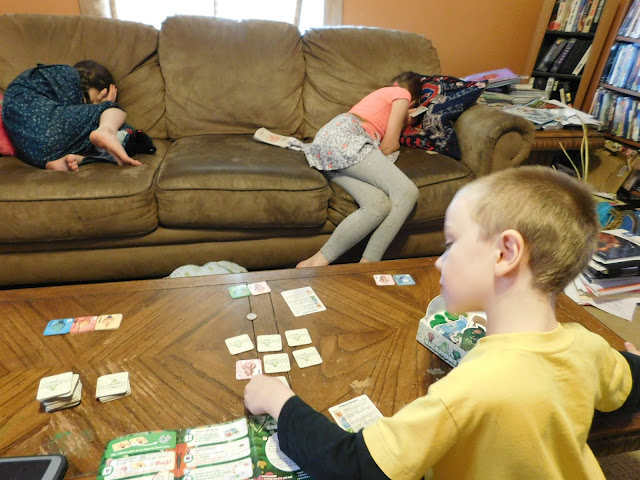 Putting a rock token on top of a tile to keep it safe for the player until his/her next turn.
(This is the power of Geomon) 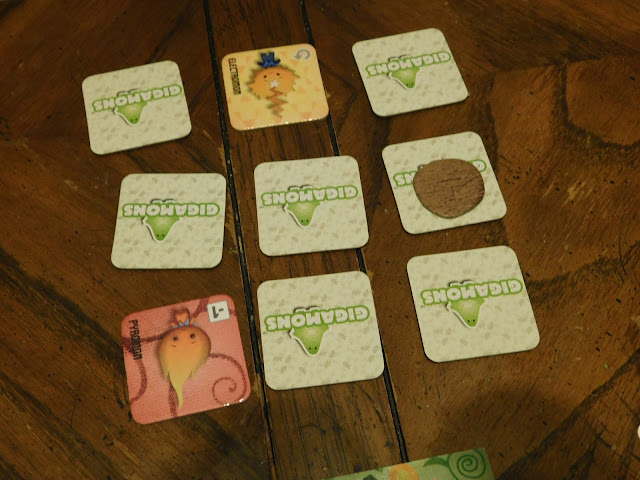 And then there is Polymon. Polymon is like a wild card, it can be matched with any other Elemon to make a match. The only thing is, the other Elemon's power will not be triggered in this instance. So, in the following play, the player was able to take both Polymon and Geomon, but was not able to put a Rock token on a card. 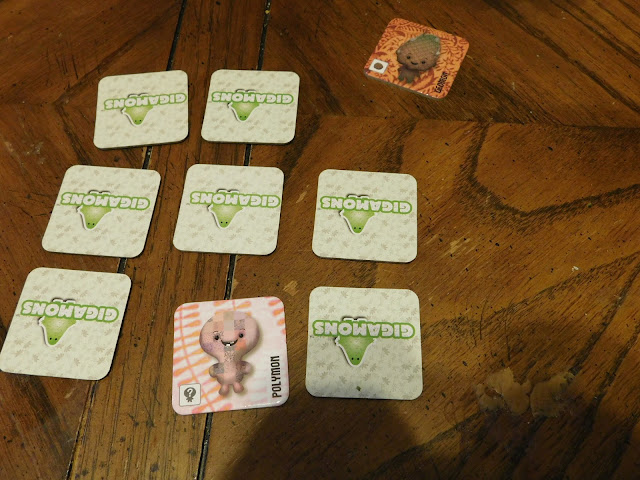 Once the player has three of the same Elemon, they get to summon the Gigamon. These three Polymon tiles summoned Supermon. 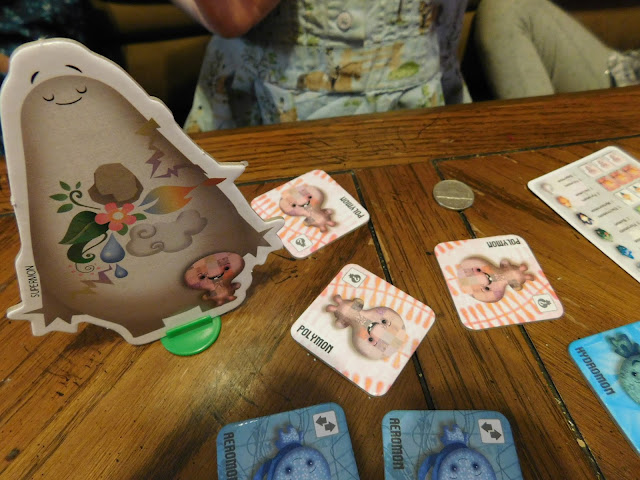 And Hannah was so pleased to be the first to summon a Gigamon. 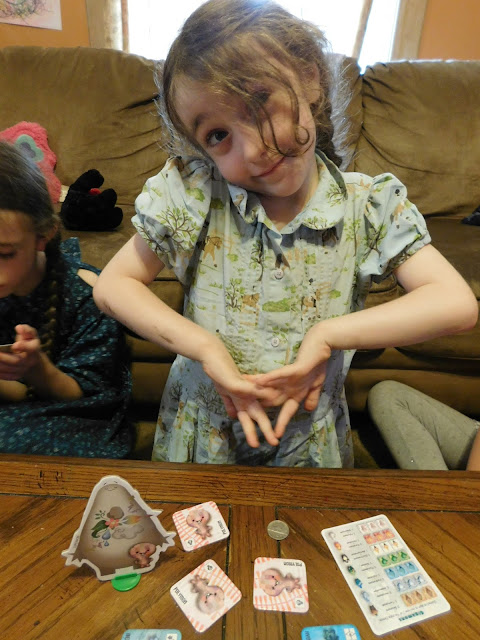 Unfortunately, she wasn't the only one to summon Gigamons. The winner of the game is the one who summons three Gigamons. In this case, that was Amelia. 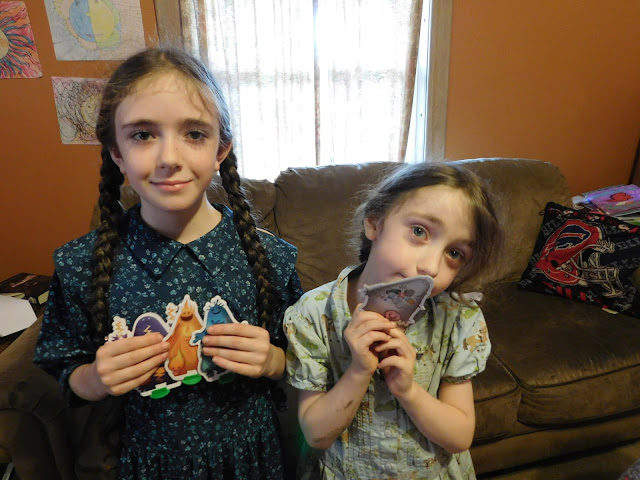 They loved this game so much, they played it again right away, with Tabitha winning this time: 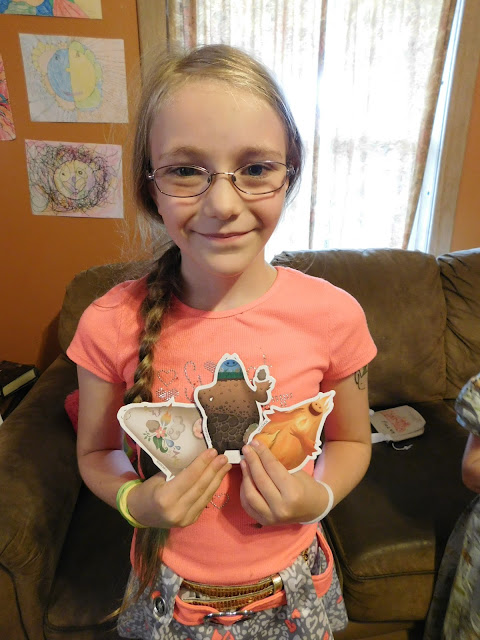 The children are really enjoying this game. Even though it is for children ages 6 and up, Harold has been able to play with no problem (and he is 4 1/2). If your child knows how to play matching games, Gigamons should be no problem. The Elemons having powers gives it an added level, but not something that makes it trickier, just more fun. It is actually easier than a typical memory game as you are only playing with a grid of 9 tiles at a time.

Gigamons will help a child develop memory skills, as they have to remember where they last saw the Elemon. They also have to learn to pay attention when it is not their turn, or they will not know where the Elemons are hidden.

One quick note, according to the instructions, the players are supposed to be apprentices entering the Wizards' Guild, and this is the final lesson to master. I completely ignored this part of the instructions. I didn't feel the children had to think they were wizards in order to play the game. They are just discovering cute little Elemons and finding matching pairs, making Gigamons when three Elemons are matched.

This is such a cute game. I love that it is a twist on memory matching games. Definitely another fun family friendly game for game nights. 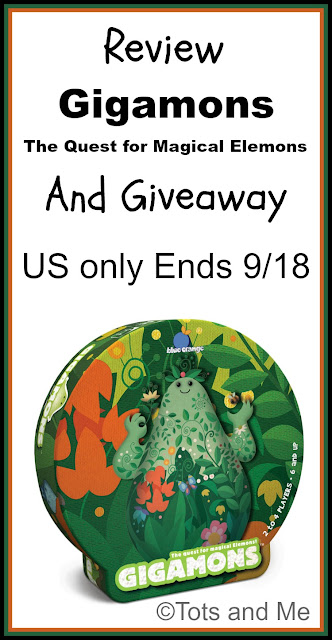 Great news! I have been given the opportunity to offer a giveaway for one person to win Gigamons

This giveaway is open to US residents 18 and over.
The giveaway runs September 5th through September 18th.

Disclosure: I received a copy of Gigamons from Blue Orange Games in exchange for my honest review. No further compensation was given. This did not in any way influence my review. I only recommend products I use personally and feel will be a good products for my readers.
Posted by kewkew at 1:22 PM