We had the opportunity to review this hilarious children's book called My Favorite Pets: By Gus W. For Ms. Smolinski's Class. This book was written by National Book Award winner Jeanne Birdsall and illustrated by New Yorker Cartoonist Harry Bliss. 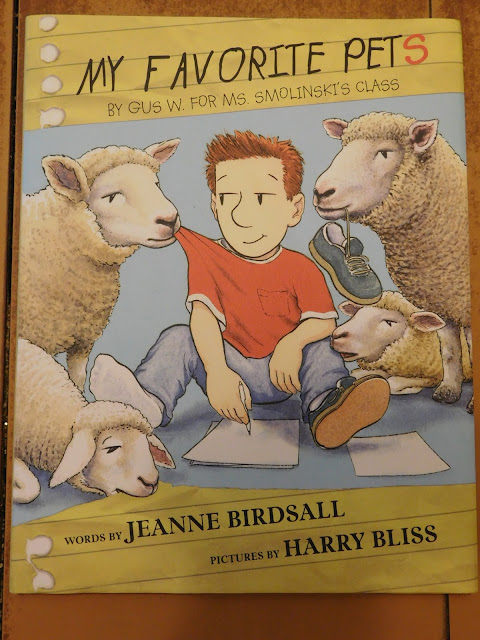 The text of this book is the report that Gus has written for his teacher, Ms. Smolinski. He was supposed to write about his favorite pet. His family has seventeen sheep, so he chose them to star in his report. On each page, Gus is sharing little details about the sheep, some of which are hilarious by themselves, while other details become much more humorous when paired with the illustrations on the page. For instance, we learn that, " A boy sheep is a ram. He has horns." 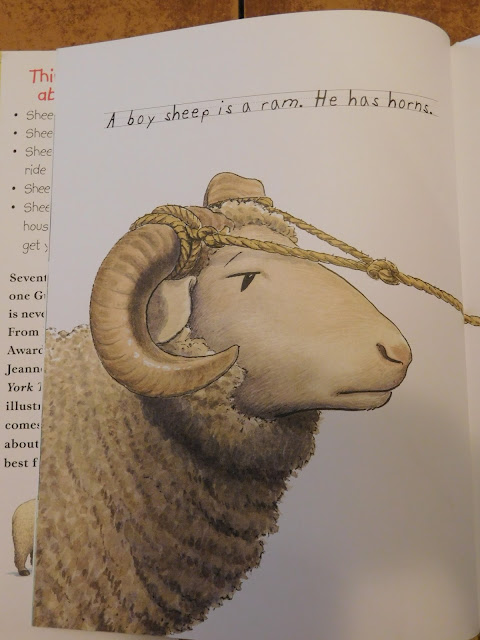 And then on the next page it states, "The horns do not come off." Which is quite true of course. Then we add the picture: 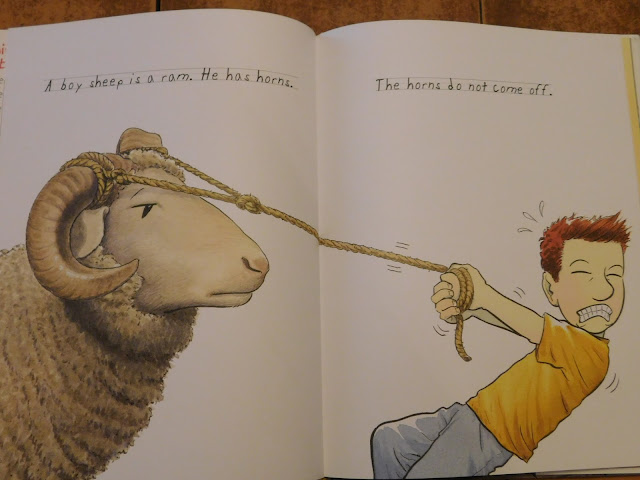 Throughout the book, Gus is getting himself in trouble while learning things sheep do and do not like, what they can and can not do. These poor sheep and Gus's brother are at the mercy of the curiosity of a young boy who tends to take things too far and not really think through what he is doing.

What did we think of it?:

First of all, I LOVE that it is written as Gus's assignment and that we get to see the notebook lines on each page. Occasionally, the text also includes talk bubbles of what his parents are saying to him. It is a hilarious book with wonderful illustrations that really "make" the story. 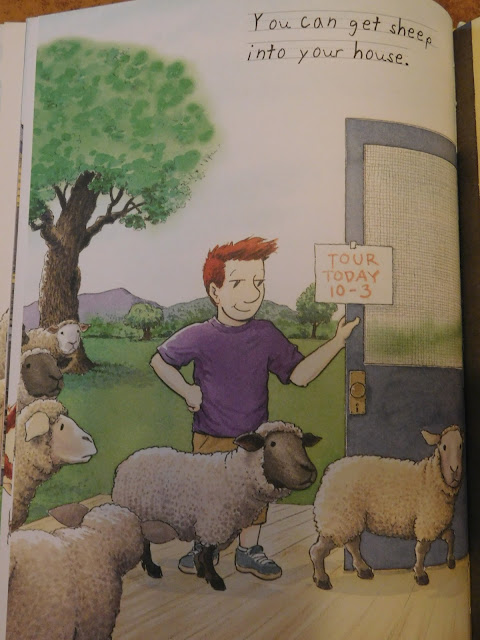 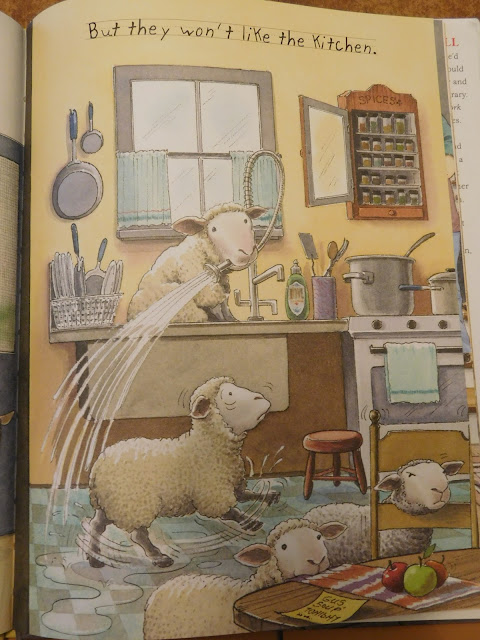 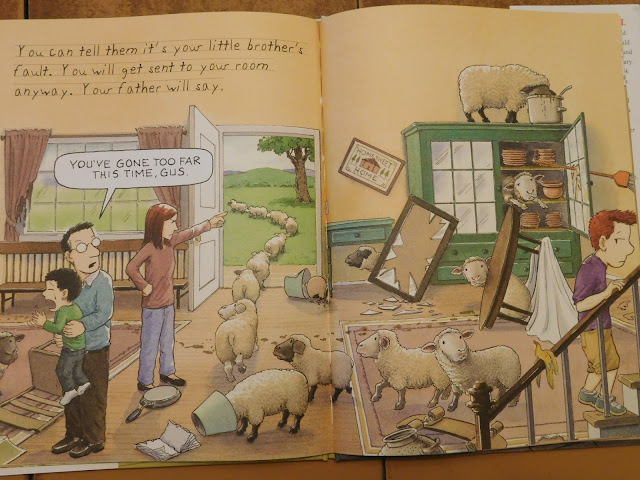 I also thought it was very creative that the title page, which is like the cover of the report, is also found at the conclusion of the story, with the grade he received plus a note from the teacher. 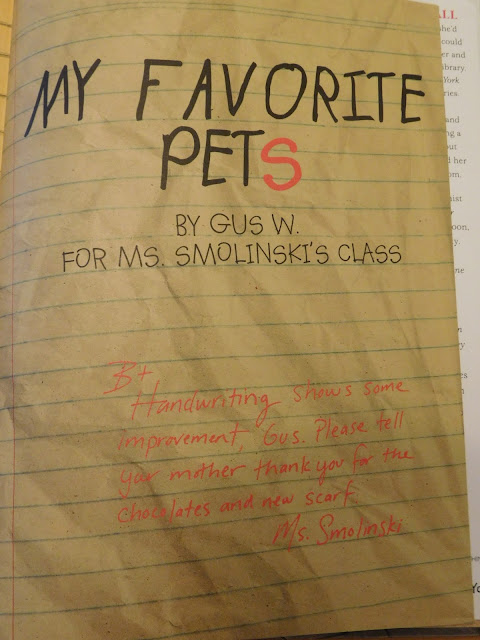 What do the kids have to say?

Tabitha: I think it is cute and funny and a good lesson not to have sheep for pets, unless you're a farmer or very good with sheep.

Amelia: It is weird.

Hannah: I think it was silly. I think the silliest part was that the horns don't come of boy sheep.

Harold: My favorite part was a silly part. The part when he put the scarf on the sheep.

About the author and illustrator:


JEANNE BIRDSALL is the author of the New York Times bestselling Penderwicks series. She resides in Northampton, Massachusetts, with her husband and an assortment of animals, including a dog named Cagney. You can find out more about Jeanne, her books, and her animal friends at JeanneBirdsall.com.

HARRY BLISS is a cartoonist for the New Yorker. His self-titled daily cartoon, Bliss, is syndicated internationally. Harry also illustrates books for children. They include A Fine, Fine School by Sharon Creech; Which Would You Rather Be? by William Steig; Countdown to Kindergarten by Alison McGhee; Diary of a Worm by Doreen Cronin, as well as Bailey and Luke on the Loose, both written and illustrated by Harry. Harry lives in Vermont. Learn more about him at HarryBliss.com.

Published by Alfred A. Knopf Books for Young Readers is an imprint of Random House Children’s Books (RandomHouseKids.com).  The book retails at $16.99. Release date: July 5th, 2016. The book is suitable for young children, 3-8 years of age. 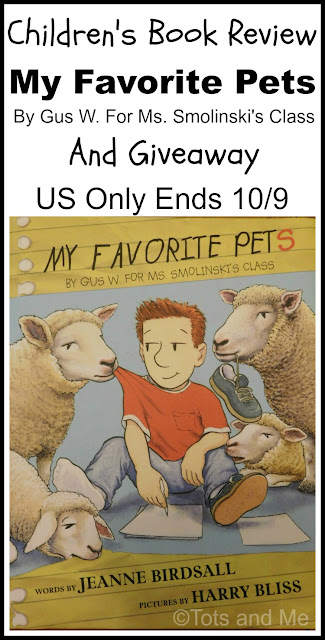 Great news! I have been given the opportunity to offer a giveaway for one person to win their own copy of My Favorite Pets by Gus W. For Ms. Smolinski's Class.

This giveaway is open to US residents 18 and over.
The giveaway runs September 26 through October 9th.

Disclosure: I received a hardcover copy of  My Favorite Pets by Gus W. For Ms. Smolinski's Class in exchange for my honest review. No further compensation was given. This did not in any way influence my review. I only recommend products I use personally and feel will be a good products for my readers.
Posted by kewkew at 10:45 AM