Apologia Educational Ministries is a company that is probably quite familiar to others in Christian homeschool circles, but one I only just recently learned about, thanks to being a member of the Schoolhouse Review Crew. Even then, at first I thought all they offered was science curriculum. I have since discovered Apologia offers a wide variety of materials to strengthen a family in their Christian faith, from science, to history and language arts, and finally to biblical worldview curriculum. I was thrilled when I was given the opportunity to review not one, but three books in the iWitness apologetics series written and designed by Doug Powell. 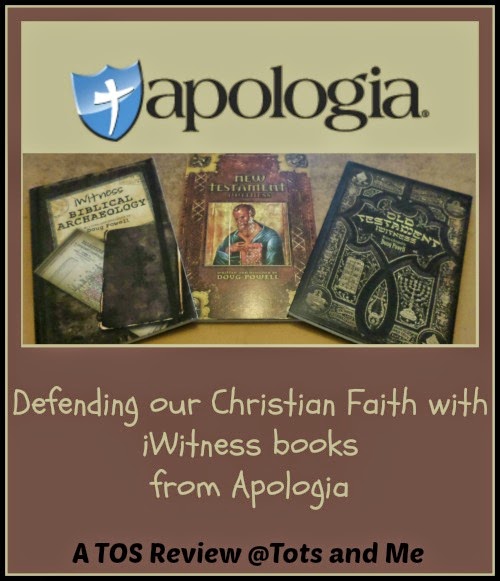 The books I received are: iWitness Biblical Archaeology, New Testament iWitness, and Old Testament iWitness. Each of these 6"x 9" books is between 60 and 64 pages long. This may seem short, but they pack quite a bit of faith-strengthening information in those pages. The reading level for these books is ages 11 and up, though they can be shared with younger children as well. 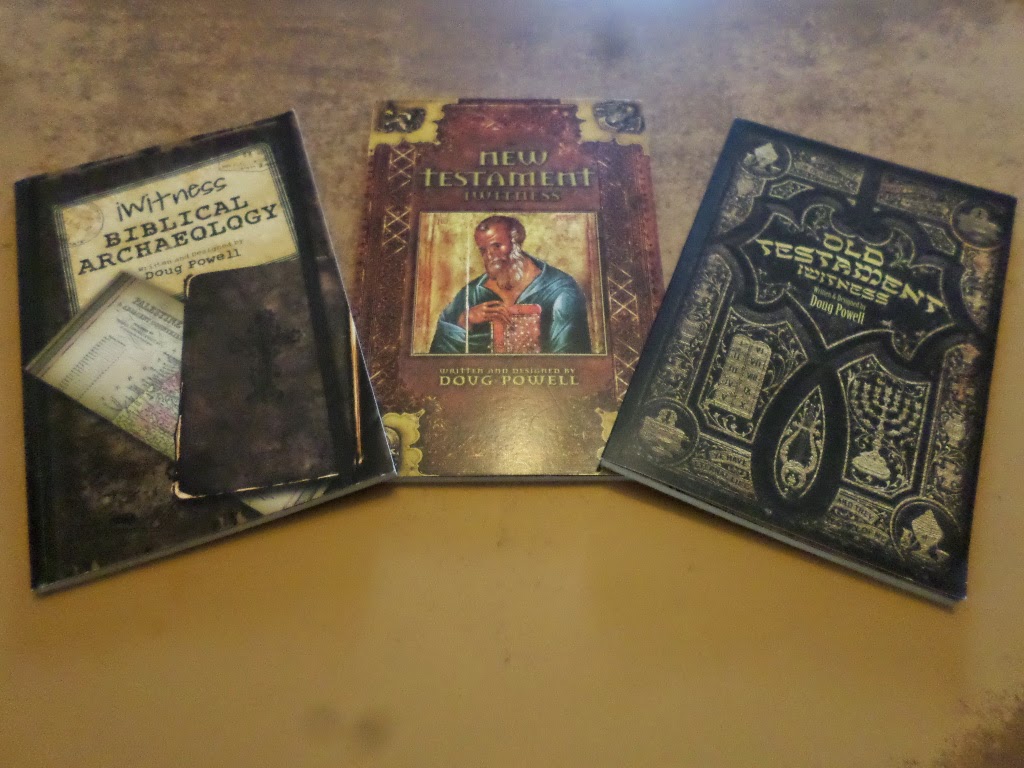 There are so many people today who try to say that the Bible is a book of lies, the events in the Bible never happened, the New Testament was written hundreds of years after the events were supposed to take place and other similar misguided beliefs. I mean, I know someone who actually thought King James wrote the King James Version of the Bible and thought that other "versions" were actually different Bible's and not just different translations. There are some really weird beliefs out there about the Bible and it is imperative for us to know the truth, to know we can trust the Word of God and that is can stand up to scrutiny. Yes, we are supposed to believe the Bible on faith, but we are also told to study the word, to know it and keep it in our hearts, and to have an answer for those who ask.

So, what exactly will you find in these iWitness books?

iWitness Biblical Archaeology provides a look into the evidence that is out there related to biblical history. It is a look at the artifacts and sites that have been discovered pointing toward the events in the Bible being true. As you can see in the sample pages below, pictures of artifacts and sites are shown along with what time period they belong to, where they were found, when they were discovered and where they are kept. By studying these artifacts, scholars have been able to find proof outside of the Bible for people and events that have been held in doubt of having even existed. For example, the inscription on Nabonidus Cylinder mentions Belshazzar, who "until this discovery was known only from the book of Daniel." 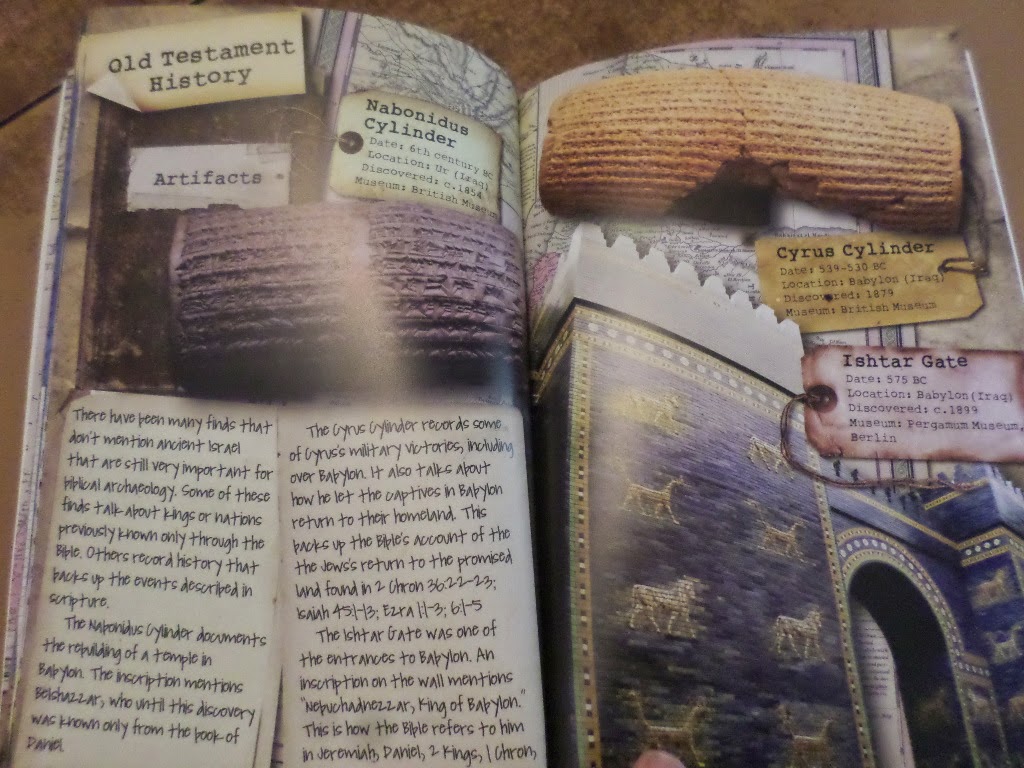 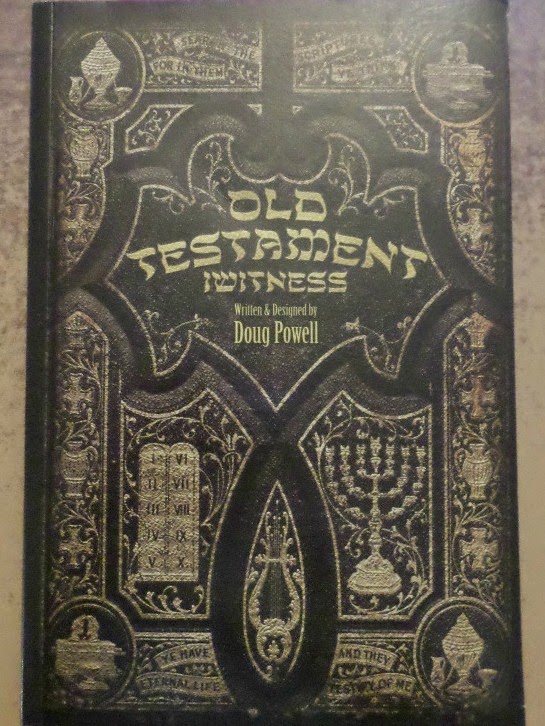 I enjoyed learning about the diligence the scribes took in copying the manuscripts, knowing that this is the Word of God and needed to be handled with the utmost care. I also found the information about the translation of the books into Greek intriguing. As you can see below, at the time of Alexander the Great, when the Septuagint was translated, the books of the Old Testament were divided into the books we know to this day. It's not that books were added, instead, the books that used to be combined were separated. 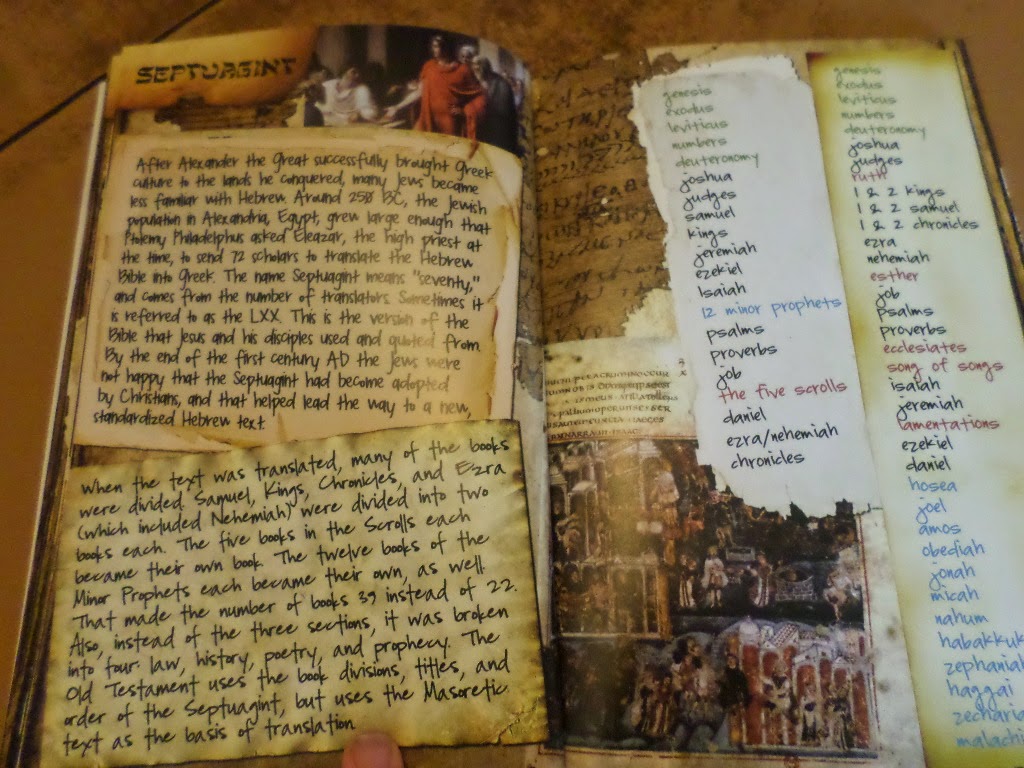 New Testament iWitness shows the history and formation of the New Testament canon. This is the book that really intrigued me. I have heard multiple times that the New Testament wasn't written until around the 4th century and that it was made up by the church, being just a book of fiction. While I didn't believe that, it is hard to answer these accusations without solid proof, because these days saying, "I have faith" doesn't cut it for the non-believer. 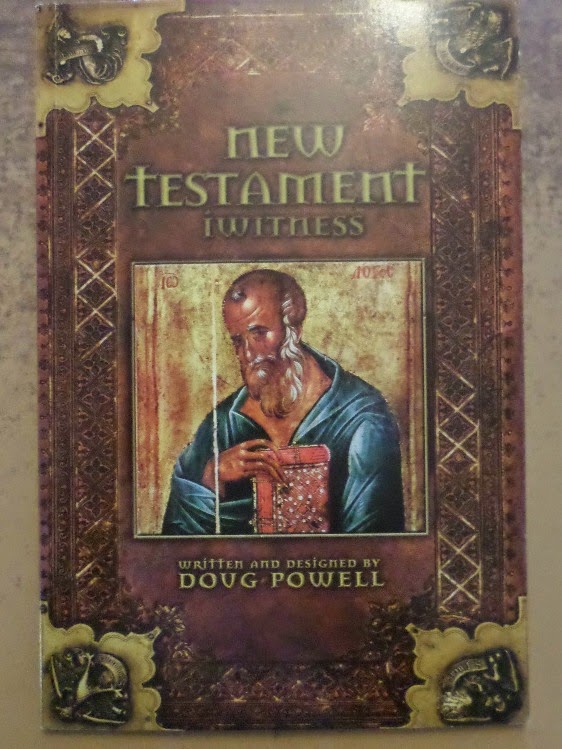 The first half of the book works its way backward through time, showing how the Christians in the different ages agreed upon what writings were to be accepted as canon. Our journey through New Testament iWitness begins with a look at the Councils of Hippo and Carthage in AD 393 & 397. It is important to understand that these councils did not choose the books, they only recognized what had been accepted by the church for the previous 300+ years.  The next section is Canon Criteria, where we discover what set these books apart and authorized them to be included in the Bible. The next sections, each 1 or 2 pages in length, discuss the different men behind this authority and what was decided during this time. They are: Athanasius (AD 367),  Eusebius (AD 324), Church Fathers (3rd Century), Church Fathers (2nd Century), Muratorian Canon (c. 170), Marcion Canon (AD 140), The Gospel (AD 120), The Apostle (AD 150), Apostolic Fathers (AD 90-150), Apostolic Age (AD 30-100), Synoptic Problem (1st Century), and Hymns  and Creeds (1st Century).
The second half of  New Testament iWitness deals with the following subjects: Rejected Books, Canon Certainty, How It Was Copied, Number of Copies, Copying Methods, Differences in the Copies, Manuscript Families (or Text Types), Textual Criticism, and Recovered Text.

Though it doesn't appear that the Christians who were copying the Scriptures were as meticulous as the Hebrew scribes were in copying the Old Testament, errors were usually minor spelling errors, homonym/homophone errors, or orthographic errors. It was intriguing to discover that sometimes errors were intentional due to the scribe thinking he needed to correct what he perceived to be an error. 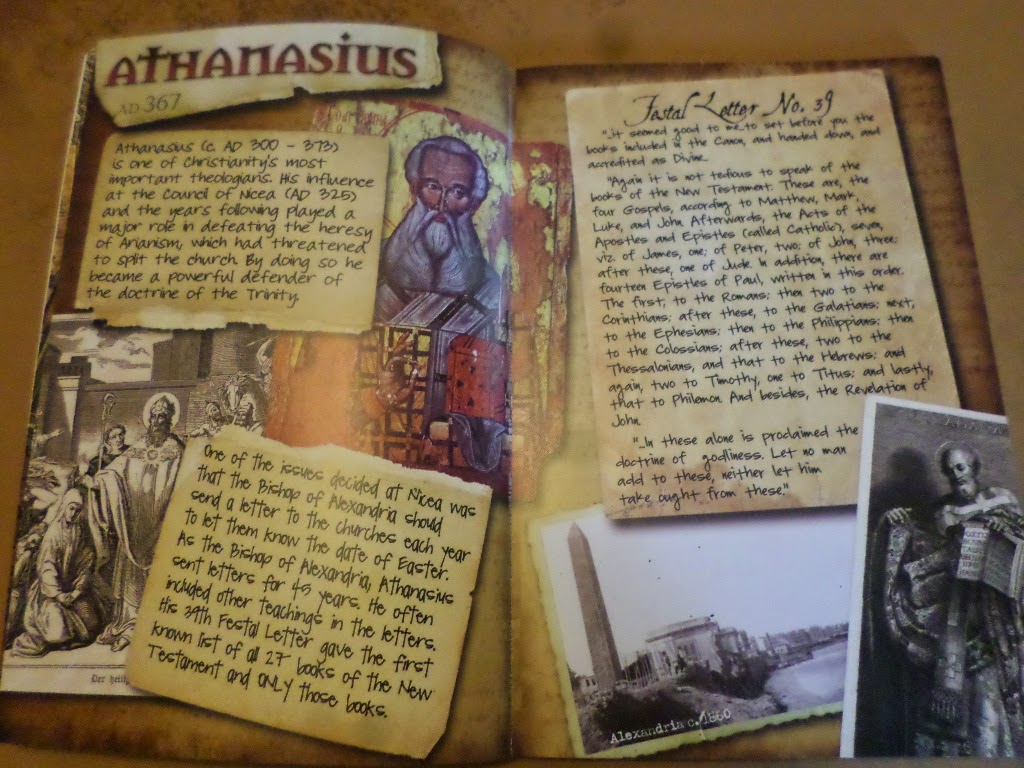 Each of these iWitness books has the feel of being a scrapbook of pertinent historical information. As you can see, the text in each of the books is laid out on the page as if it is a part of the archaeological findings. Several different fonts are used to add to the feeling of being handwritten. I admit, at first switching between fonts was distracting; however, as I continued to read I became familiar with the differences in the letters between fonts, making it easier. I love all the pictures of historical figures, archaeological artifacts and sites, and being able to see the original manuscripts.

I have enjoyed reading these iWitness books in my own "free" time. I knew when I asked to be on this review that these books would initially be for my information. I have learned a lot about the history of our Bible and the people of God.  As my children are 7 and under, I didn't think they would want me to read these books to them straight out. However, as I come across an interesting tidbit, I have shared it with the children. For instance, just recently we were learning about Shadrach, Meshach, and Abednego in the book of Daniel, so the information found on the cylinders mentioned in iWitness Biblical Archaeology was quite relevant. I've also caught myself sharing information with my husband, because to me, this is very exciting information. To know that there is more than just blind faith in accepting the Bible as truth is quite important in this day and age.

I would recommend these books to all Christians who would like a basic understanding of the history of our Bible. They really can strengthen ones faith and be a great witness to others.