I was thrilled when I was given the opportunity to receive a book titled, Venturing with God in Congo from Conjurske Publications. I was fascinated to discover that Conjurske Publications is a Christian publishing company whose mission is to "reprint the greatest Christian literature from the past several centuries and present it to Christians across the globe." They have 22 books/sets available at the moment, and I was intrigued to see there are stories about D.L. Moody and Amy Carmichael, both of whom I have heard and read a bit about in the past. 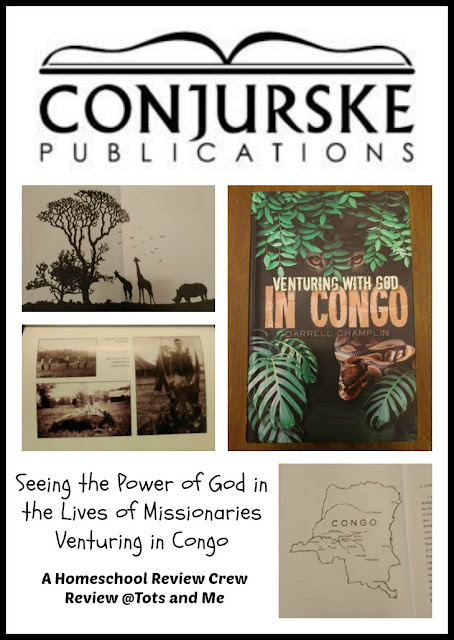 The book I received is a hardcover book, 290 pages in length. It is full of short stories written by Darrell Champlin in the year 2000 and compiled by Conjurske Publications. Though Darrell himself has been "promoted to higher service in His presence," his wife Louise and their children continue on the mission field, sharing the Gospel of Christ. 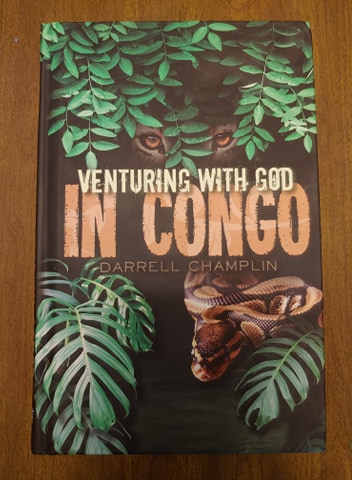 As you can tell by the title, this family followed God's call to the Congo where they spent 10 years in the mid 1900's before they were evacuated due to the conflict there. 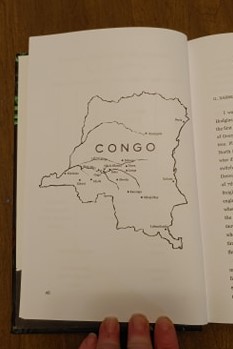 The book begins with a look at Darrell Champlin's thoughts on missions. There is a Table of Contents, where you can see the titles of the 47 chapters, Acknowledgements from Louise Champlin, Pronunciation Tips for Lingala, a Timeline of Important Events, and an Introduction of Autobiographical Sketches from Darrell and Louise plus a Family Tree of Louise's family. The book then moves into the true life stories of the missionaries' time in the Congo. The first story is actually the story of Louise's parents arriving in Congo and then the book continues on with Darrell's rememberings, starting in June of 1954 when he started out with his pregnant wife, 18 month old son, and Louise's youngest brother Mark Grings, to the Belgian Congo.

I was intrigued to learn about the different culture there in the dark jungles of Congo. Through these stories the reader is introduced to what appears to us as a primitive culture, people living in mud and stick houses with dirt floors, running around in clothes that are not washed but worn until they need to be replaced due to dirt and grime and sweat. We learn of a people who are steeped in darkness, animism, taboos, and superstition. And it is amazing to see how God works in the lives of these people through the missionaries and then the native people who become Christians and grow the local churches. It touched my heart to hear of people being freed from sin and living without the fear they were constantly bombarded with throughout their lives.

To realize that missionaries leave the comforts of the 20th century to live these primitive lives so they can reach the lost is quite moving. To know they are willing to live among termites and fleas and deadly snakes and large predatory cats that can walk in on them at any time, as well as go to people who don't want to hear from them, and will at times try to harm them, really touched my heart.

I love reading of the miraculous transformations of nonbelievers into believers, such as can be found in the chapter "Lulu Bekanga: Miracle of a Murderer." He changes his name to Bekanga Paul and grew in his faith, stood faithful in the midst of torture and demands to deny Jesus, but escaped and lived in hiding, becoming an apostle to his people.

And the stories of the way God's hand was seen in the day to day lives of these missionaries is just awe-inspiring. To know that God still works in such miraculous ways in these modern times is just so powerful.

The stories show how seeing God's hand at work helps the native people turn to Him. In "You Are Not Going to Die" the power of God is seen when a woman who just about gives up during childbirth is brought back from the brink of death and both she and her baby are saved. Events like this show the native people that turning to the Christian's God is not going to bring them harm, but deliverance and good.

In the chapter titled, "Itupa, The Buzzing Snake," Darrell is with Ituku on a trek through the jungle and they come upon a snake that is buzzing, warning them of the danger. Darrell is able to kill the snake, giving them meat to take home, though it wasn't the meat they were hoping for. But more importantly, Ituku tells Darrell, "God is with you. The itupa only buzzes after he strikes. God must have told him to buzz this time before he struck. Thank God for His goodness."

There are just so many examples of God's power in the stories told by Darrell in this book. To see the way the missionaries trusted in God makes me realize I have a lot of growing to do. This book is such an encouragement to me. I did read it myself, and not as a read aloud to my children. Mainly because we have so many things we are reading currently. As a warning there are some parts of the book that might be a bit intense for younger children, such as the part of Bekanga Paul's story when it describes the way he is tortured, or the chapter on Becoming a Man that describes what a young man needs to go through in order to be considered a real man. Mention of half-naked people is mentioned, along with polygamy.

I would highly recommend this book for you as a parent to read and for older children. I do think it is a great read aloud for younger children, as long as some parts are edited or omitted. Of course, others may not have the same concerns, but you may want to read it first, before reading it to your children. It's definitely a great read for strengthening your faith and encouraging you. And if you are learning about the Congo, it would be a great way to look into the culture there and how God was brought to the people living in darkness. And I love that there are photographs included in the middle of the book. 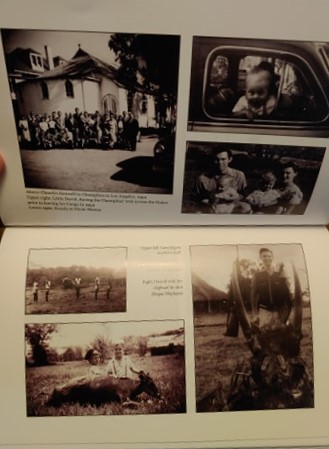 Don't forget to click on the banner below to read the thoughts of my fellow Crew Mates.