Are you looking for a fun way for your children to learn their multiplication facts? Honestly, at one point, I didn't think my children needed anything beyond sitting down and memorizing the times tables. I mean, it's what I did as a child, and it worked for me. However, a couple of years ago I was introduced to Online Times Alive from City Creek Press, Inc. through the Homeschool Review Crew. At that point the older girls used the program and Hannah sort of looked on every now and then. When we had this chance to review it again, I was eager to have an opportunity to use it with Hannah. 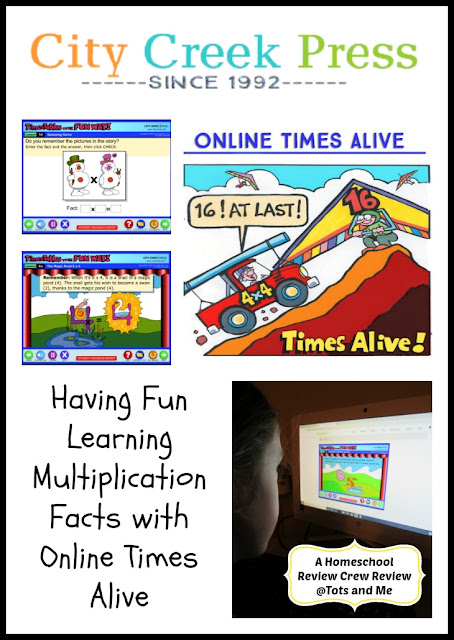 This time around we were given a six-month subscription to Online Times Alive. With this fun, animated program, children get to watch video stories, listen to the related songs, play games, and complete progress checks to help them remember the different multiplication facts from 0-9. 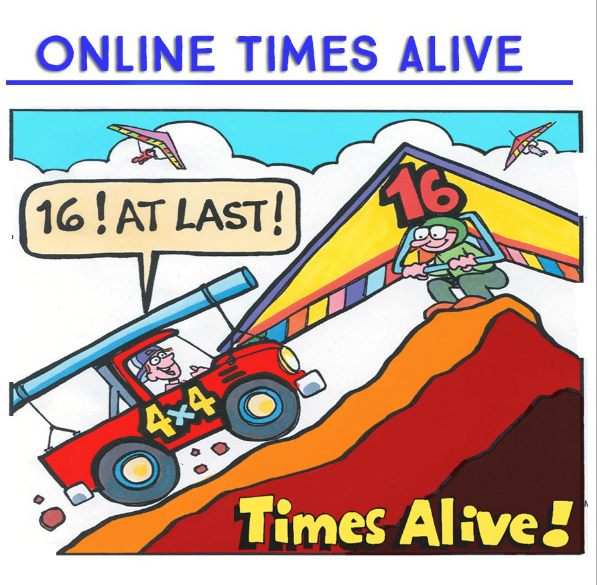 Yes, you need a computer with internet access to utilize this program. They also have an app available for iOS 9.0 or above: however, this wasn't something we could utilize. Besides, I sort of like having the children working at the computer instead of on an app.

You can have multiple children on one computer or you can have children use different computers, but each child needs to make sure they are using the computer they used previously as progress is saved to the hard drive of that computer. Each child will have their own login name, though no password is needed. They just need to make sure they type in the name correctly, including making sure they know whether they used upper or lower case seeing as it is case sensitive.

Once we gained access to the program, which was quite simple, the girls were able to get started. Yes, I said girls. I had Hannah working through the program, and I also had Amelia using is as review. It appears that most of the facts had "stuck" from the last time through the program, but there were still some that she was finding difficult to recall. I had wondered if it was because she had zinged through the program two years ago, completing multiple lessons in a day, instead of following the recommendation of working on a lesson at a time. One thing I had noticed is that the child isn't told that they are at the end of a lesson, it just continues from one lesson into the next. So, a young child, especially if they are enjoying themselves because it is such a fun program, may just keep going. That is one thing I remember wishing, and still do wish, was different with the program. It would be awesome if there was a reminder that would pop up, stating "This is the end of Lesson ___, please take a break and continue later." Or something like that. Because this program is great for a child to work on independently, a parent isn't hovering over them while they work, so I had no clue when they were supposed to be done for the day.

Anyway, I got off track a little there. As I was saying, it is quite simple to get started on the program. First the children are warned that only kids who want to have fun can use the program. Which I think is cool, especially because it is stated in a sort of robotic voice. 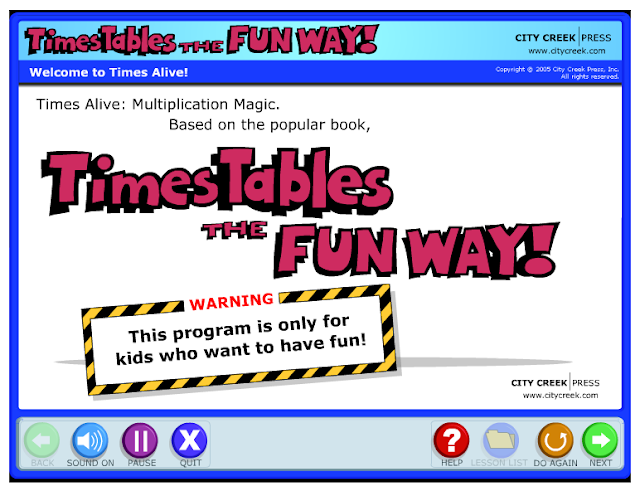 Then they come to the login screen. 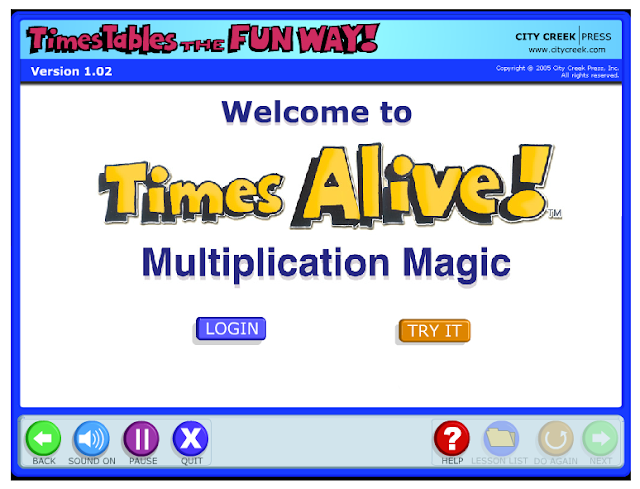 Once they enter the program they find the Lesson List. 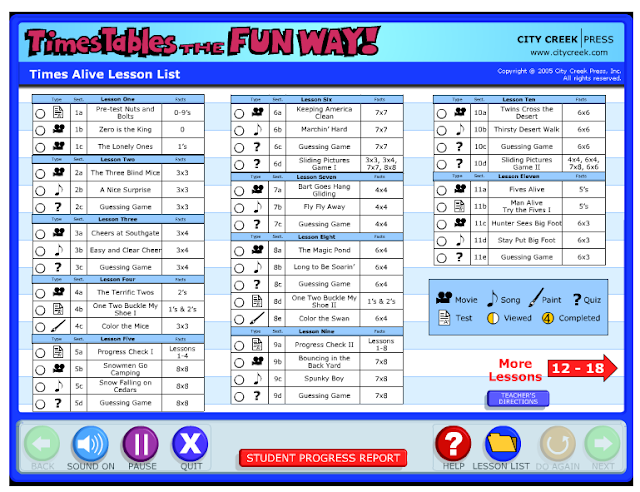 Let's talk about this screen for a bit.

Lessons 1-11 are on the first screen, and lessons 12-18 can be found by clicking the red arrow toward the bottom right-hand corner of the screen. The blue box above the arrow is a key explaining the different icons you will find on the lesson list. Each lesson will begin with either a progress check (which happens after every four lessons) or the animated movie for the new fact. There is also a pre-test and a post-test, and quizzes (in the form of games) throughout the program. The circles to the left of each lesson depict the child's progress. An empty circle means the lesson hasn't been done, a circle that is partially filled in yellow means the child has viewed the lesson, and a completely filled in circle containing the number 4 means the child has completed that section of the lesson. They can always go back in and view sections which they have previously completed.

You, or the child, can click on the red "Student Progress Report" to see when each lesson section was completed. If the section has been completed more than once, you will only see the most recent date. You will also find the results for the tests/progress checks. You can see how many the child got correct, the percentage grade, plus the length of time it took to complete. 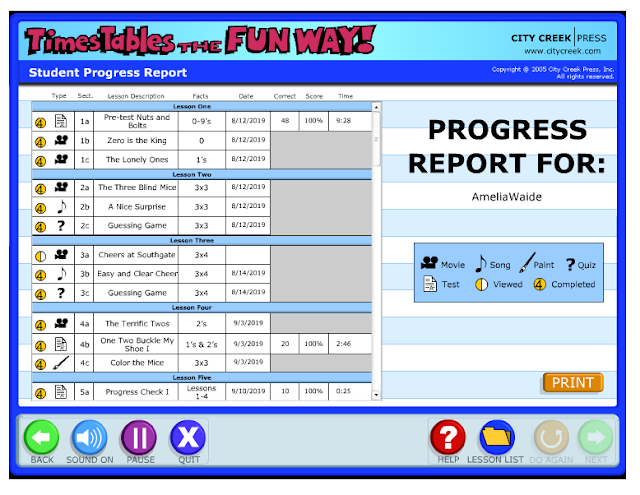 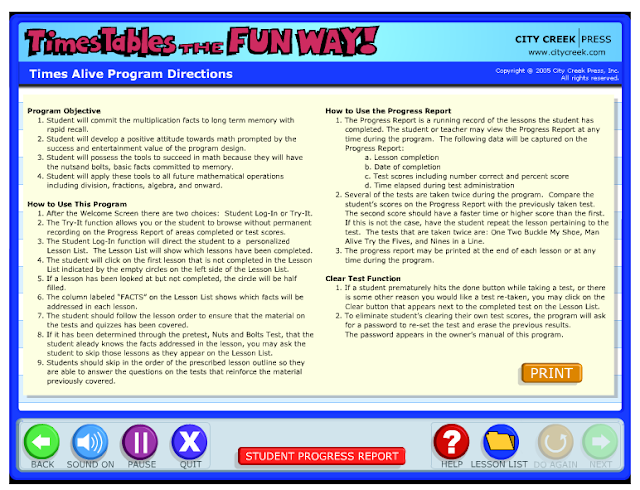 Now, let's take a look at the actual program.

Before getting into the lessons, the child is to take a pretest. This is scored and timed, so progress in accuracy and speed can be assessed as the child moves through the program. I explained the the children, that they should check and make sure the answer they want is the one that is showing on the screen. They are able to change their answer prior to clicking the "Done" button.

Here's a look at the pretest I took, with a couple of mistakes, because I was checking to see what a student had to do to fix their answer before clicking done. 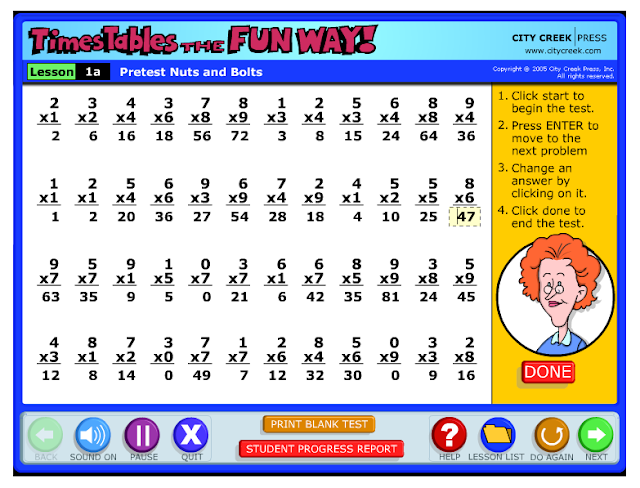 I asked Hannah what one of her favorite lessons was, and she told me 8x8=64,which is lesson 5.

The narrator will tell the story as the words appear on the screen. 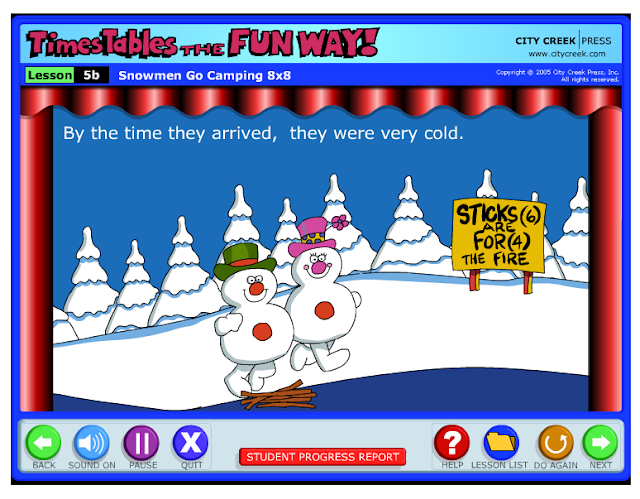 At the conclusion of the story, there is a reminder of how the pictures relate to the story which relate to the multiplication fact. I sort of like this one too, because they make the word "sticks" represent 6 and the "for" represent 4. And because the sentence has to go "The sticks are for the fire," the child should remember that the answer is 64. Hannah realized that she got the answer wrong during a progress check because she had typed in 46 instead of 64. She was like, "Oh wait, the sticks are for the fire, which means the six comes first, so it is 64." 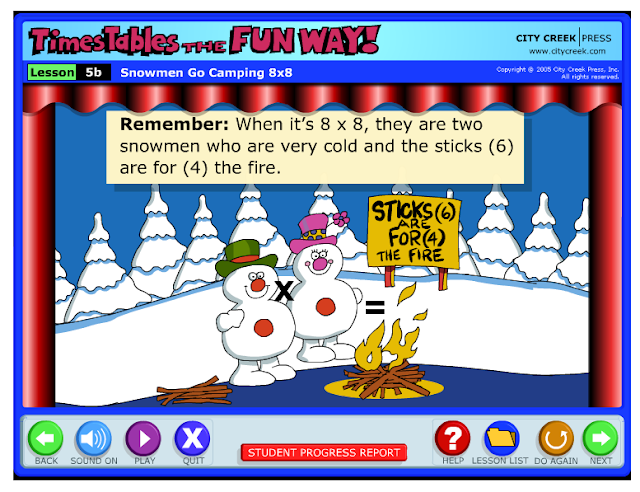 In fact, I had her tell me the story, and I loved that she was able to tell it in her own words. This is what she told me, "There were two eights they were the snowmen, so eight times eight. And they were super cold and they were going for a walk. Then they found a sign that said 'the sticks (in other words six) are for (as in four) the fire.' But once they got towards the fire, they shrunk. The end."

After the story ends, the child will watch a "music video." This uses the same animation, but has a catchy tune with different words. The connection between the story and the math fact are again reinforced. 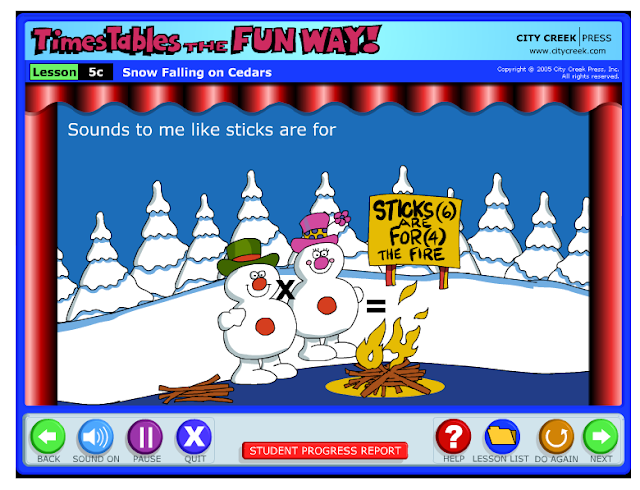 This brings the child to the little quiz, which might be a guessing game or sliding pictures game. In this case, it was a guessing game. The children are asked to remember the characters in the story and remember what happened. They then need to type in the fact. 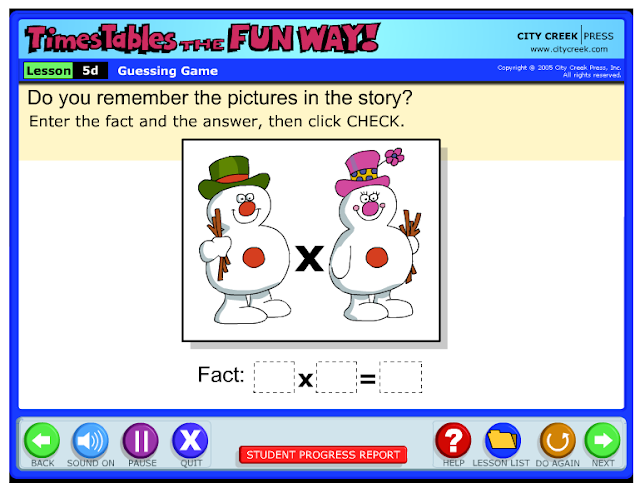 After answering correctly, the child moves to the next screen where they need to solve the problem without the picture. If they are right, they are rewarded with an exuberant "Excellent!"

I asked Hannah what one of her other favorite stories was, and she said 6x4=24. Again, I asked her to tell me the story. Here it is in her own words.

"Once there was a snail who was tired of just looking at the ground. He wanted to be able to fly. He wanted to be a swan. He heard of a magic lake that could make one of your wishes come true. So he found the lake and got in. And he closed his eyes and wished with all his might, and POOF, he became a swan. The swan formed a two and the lake was a four. And the snail actually was a six. And the four is still a lake." 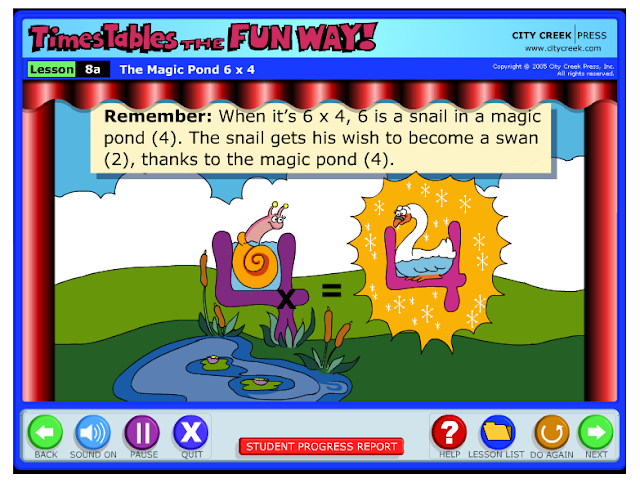 Hannah and Amelia have been making their way slowly through Online Times Alive. I wanted to make sure they did NOT zing through like Amelia did last time, because I want to make sure these facts stick. 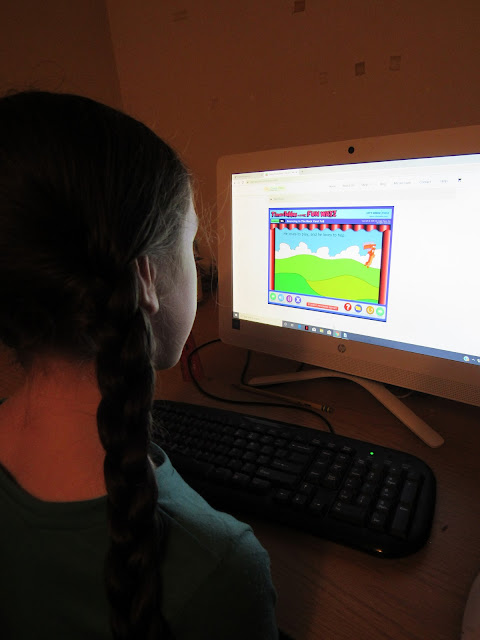 They get on during their computer time, watching and listening to the story and song, and answering the quiz question. Then, I have them move on to another subject. I love seeing how their recall is improving, and I especially love having Hannah tell me the stories, and seeing how she connects it to the multiplication fact. Amelia says she is still struggling with some, but we will continue working on it. 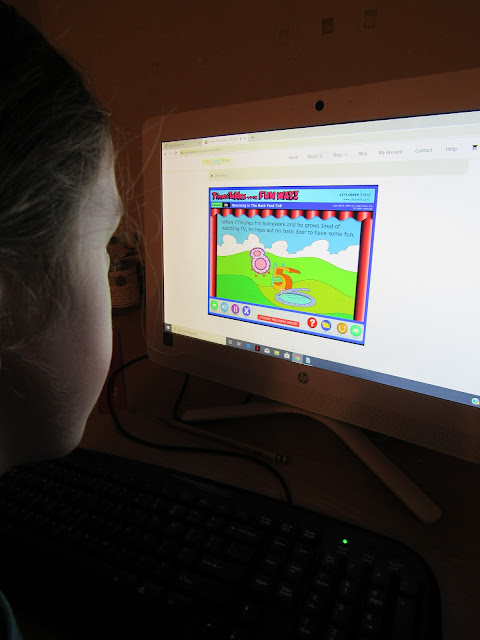 I absolutely love the play on words (i.e. thirsty sixes for 36, or sticks (6) are for (4) the fire), the catchy tunes, the fun animation, and the pictures shaped like the numbers. I also appreciate that they teach tricks for such numbers as 5's and 9's.These things stick in the children's brains to help them remember the facts and improve recall, which is very important as they get older. I love listening in the other room and realize Hannah is signing one of the songs.

I definitely recommend you try Online Times Alive, especially if your child is struggling.

Don't forget to click on the banner below to see what my fellow Crew Mates thought of this fun, online multiplication program.