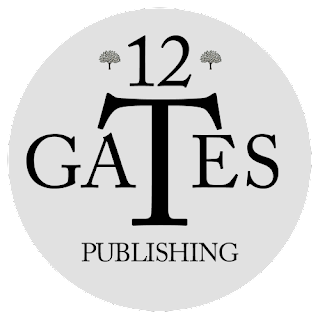 I am a huge fan of fantasy books, so when I learn of a new series, I get quite excited. I also know Tabitha really enjoys this genre as well, so I didn't think I would have to twist her arm to get her interested in reviewing the first two books in a Christian fantasy series published by 12 Gates Publishing. And I was right. Though The Hamelin Stoop Series is advertised as being a young adult fantasy series, I figured it would be safe for Tabitha to read as it is supposed to encompass the story of the Bible, making the books Christian in nature. You see, at twelve years old, I don't allow her to read other young adult books because they always seem to be filled with foul language and/or sexual situations these days. However, she is quite capable of reading books at a higher level, so I was grateful for this opportunity to share these books with her. 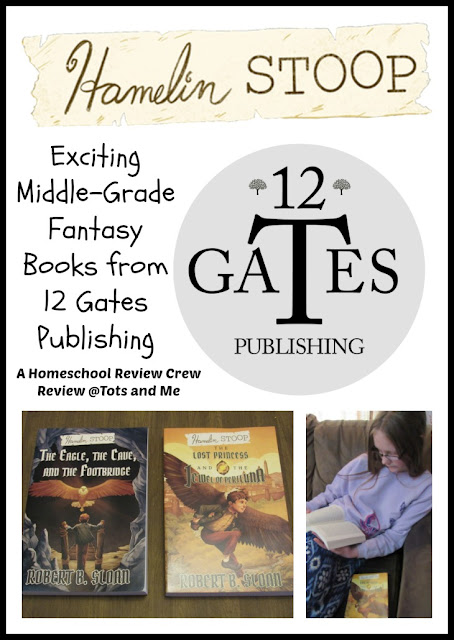 There are currently only two books in this series written by Robert B. Sloan; however, the plan it to have six to seven books in the series once it is complete.

The series takes place between different worlds. What we would consider the "real" world plus the world beyond the Atrium of Worlds. There's quite a bit of mystery surrounding what this other world, The Land of Gloaming, really is, but we do discover that Hamelin's mom, Johnnie, is originally from our world, ends up in the other world, but then makes her way back to the "real" world where she meets Hamelin's father. There is a great evil in that other land, but there is also talk of the Ancient One who is on the side of good. I don't know for sure, but I get the feeling that he is meant to be symbolic of God in this mythological land, as I went into reading this series with the impression that it is meant to be allegorical. 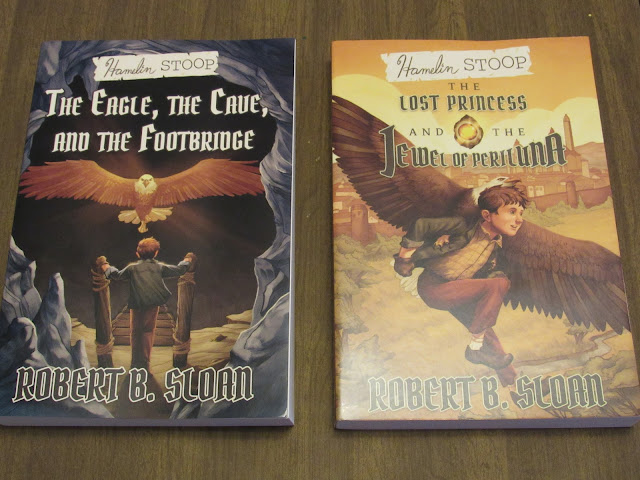 Hamelin Stoop: The Eagle, The Cave, and the Footbridge (Book 1) 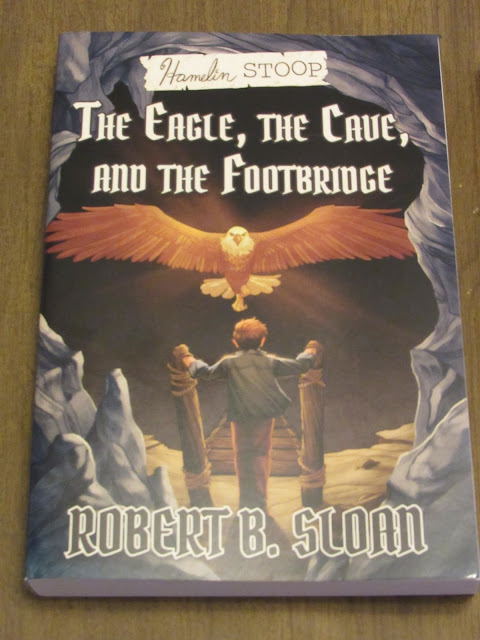 In this first book of the series, which is 320 pages in length, we see Hamelin grow from being a baby of a few weeks old, to a child of 12 years old. His parents, Johnnie and Simon are forced to abandon him so he is not taken with them when trackers from the other world come for them. His mom leaves him in a tomato crate at a children's home where she grew up, so she knows she has left him in good hands. In between accounts of Hamelin growing up in this home, we see what happened to his parents after they were captured. We are also introduced to another character from the other world who is going to be important to the series, the princess Charissa.

Hamelin, it is believed, is meant for great things in the other world. When he turns eight years old he is devastated when his birthday is forgotten by everyone he knows, so he runs away and finds a cave where a giant eagle tries to lead him to the other world. However, he is not brave enough to make it across the footbridge, so he ends up back at the children's home. A few more years pass as we see his situation get better. At times he even thinks about the cave, the eagle, and the footbridge, and wonders if he will ever get the chance to make it across. As a reader with the second book in hand, it was quite obvious that he would eventually make it across the footbridge and make his way to this other world. Part of the suspense of this book was waiting to find out when this would happen, especially because we learn that his failure is somehow affecting Charissa in the other world. Thanks to some good friends and a special teacher, along with some books and letters, one of which encourages him to, "Keep Waiting, Keep Hoping," he eventually does find his way across.

Hamelin Stoop: The Lost Princess and the Jewel of Periluna (Book 2) 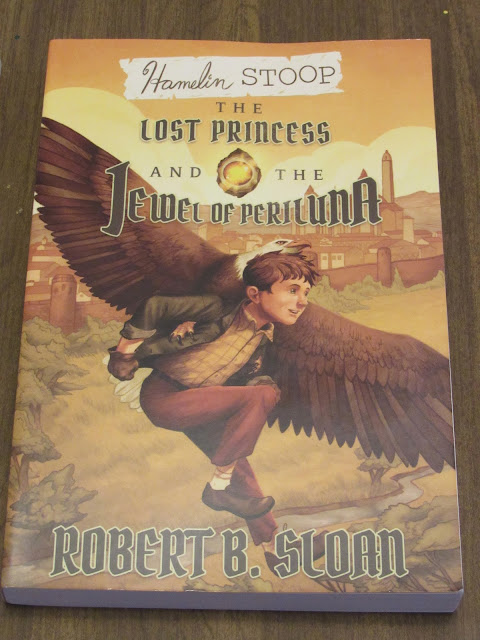 In this second book of the series, which is 292 pages in length, Hamelin has crossed the footbridge and needs to continue his journey through the dangerous path to the other world. Once he arrives, he finds he has tasks to complete before he can learn what he dearly wants to learn, where his parents are, and what his real name is. He soon finds himself in the company of Eraina and Lars who he is to help with their quests. I love that a map is included so we can more easily picture where our characters are heading. 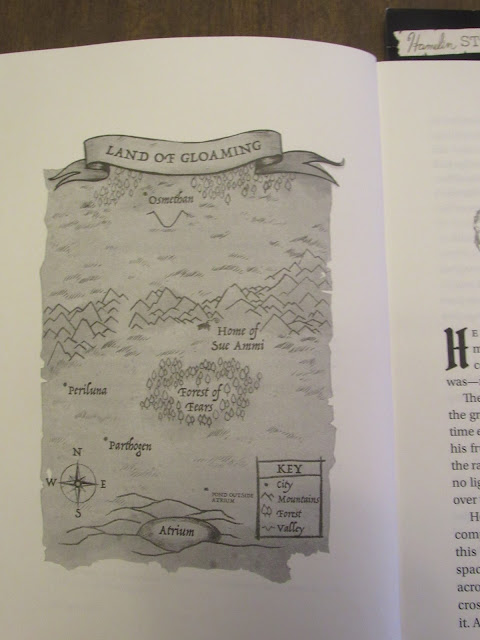 Eraina is searching for her sister, who happens to be the princess Charissa who Hamelin failed to help when he didn't make his way across the footbridge the first time. Lars is searching for the special Jewel of Periluna, his home country, which has been stolen. It is imperative that they retrieve this jewel as it is essential for the survival of his land. They embark on their perilous quest, getting help from the mysterious Hospitable Woman and the Great Eagle again, aiding each other using special gifts given to them by the woman. However, their adventures do lead to some life-threatening situations, adding an extra layer of suspense.

Obviously I am not going to spoil the ending of this story for you, it's bad enough you sort of know the ending of the first book, though I tried my best to not give too many details. However, I did want to mention a few more spoiler-ish details in the paragraph below while I share my thoughts of these books.

I did want to warn you that there are several intense scenes. The ones that pop into my mind the most are from the beginning of the first book. Though we know that Hamelin survives the encounter his parents have with the trackers, there is a scene where Johnnie and Simon deceive the trackers by throwing what appears to be the baby wrapped in blankets over a cliff. And, after they are captured, there is quite the harrowing journey to the other world, and then talk of torture when they are in the grasp of Ren'dal the son of Chimera, the evil one. There is also an awkward type of scene, though there are no details, when they are discussing that fact that Johnnie and Simon are meant to procreate so a baby can be born, a baby that is to fulfill this prophecy (because Ren'dal is unaware of Hamelin's survival). This is later followed by a devastating scene where the baby, who ends up being a girl instead of a boy, is taken away to be killed.

I have also found myself confused a bit when it comes to the mystery of why time seems to stand still in certain places. At first I thought this meant the Land of Gloaming, and yet time went on for Charissa and Hamelin at the same rate when he failed to cross the footbridge the first time. However, in Ren'dal's realm, the children didn't age. I'm hoping this is cleared up in future books.

I will say, that while the first book did capture my interest right away, it didn't quite hold my interest throughout both books the way other series have for me. In other words, it didn't quite have that "I just can't put these books down" draw. I've also had to remind Tabitha she is supposed to be reading this book, when she would rather pick up something else that has captured her attention.

Speaking of Tabitha, here is what she has to say about the first book.

"I just like this book. I would love to know if Hamelin ever meets his parents. I like the fact that it doesn't stick at one character the whole time. That can get pretty boring at times. I like learning the background stuff, like this is what is happening, when this is happening. I really would like to know more about the other world because it is really interesting to me and sounds like a really cool place." 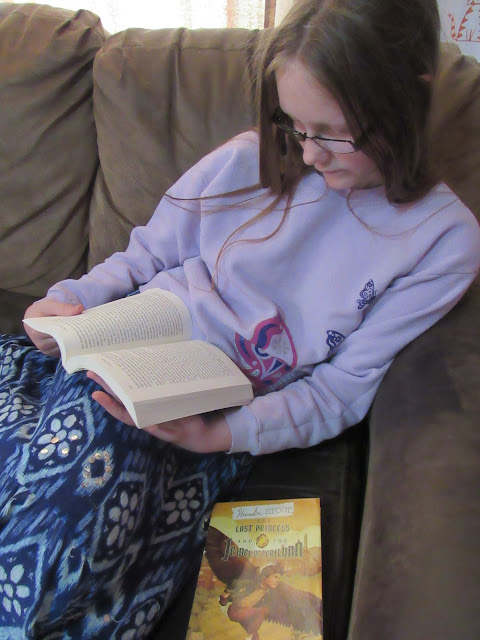 I did want to mention that the books would be appropriate whether you are a Christian or not. Though I figured they would be Christian in nature, there is no overt Christianity coming through in these books, at least not through these first two books. I was sort of disappointed that there wasn't even anyone praying for God's guidance. I could understand that in the mythological world, but not as much in the "real" world. In fact, I was a bit upset that the last words in the first book were, "Oh, my God." In our family, that would be using the Lord's name in vain, so it sort of put me off reading the second book. However, I finally picked up the second book, and was really glad I did, because in the first book the story is just being introduced, and in the second the adventure really picks up.

Anyway, if you are looking for exciting books with thrilling adventure and are a good clean read, I would definitely recommend these for you and your family. I would say the preteen to early teen age range is the most appropriate, though they would be great to read for adults and for adults to read to younger children as read-alouds.

Don't forget to click on the banner below to see what my fellow Crew Mates had to say about this intriguing young adult fantasy series.