I am thrilled that my first review for 2019 gets to be for the newest Heirloom Audio adventure. It is no secret that my family has loved every single adventure we have reviewed in the past four and a half years. In case you aren't aware, that comes to nine exciting audio dramas, all originally written by G.A. Henty over a hundred years ago. This audio theater series is titled "The Extraordinary Adventures of G.A. Henty" and they sure are "extraordinary"! This newest title is For The Temple, and it's release fits in perfectly with what we have been learning about in our homeschool. 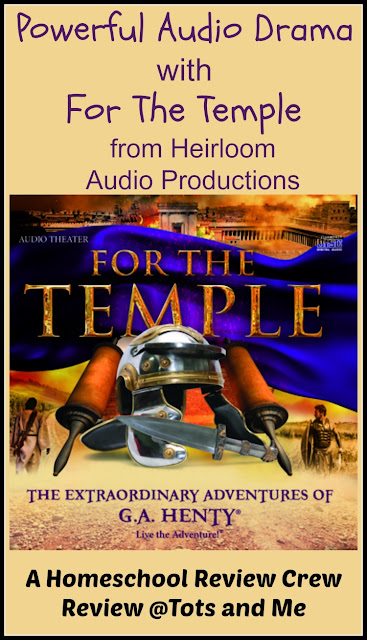 We received the two-CD set, which, as always, comes in this wonderful fold out case. 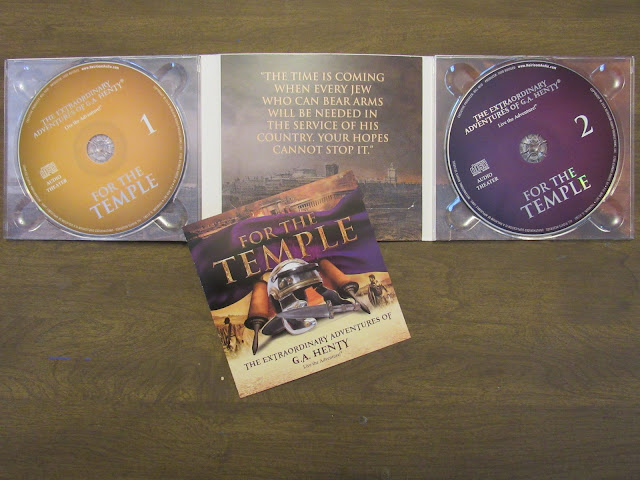 What is really cool is that if you were to order this CD set from their site, you would also get instant access to the MP3 Download. And if you are a member of the Live the Adventure Club, you would be able to listen to the story online. Personally, we love to listen to these stories in the van, especially when we are on long trips. Though we also listen to them in our living room during rest times on Sundays (and other days). It is at these times that we utilize the Study Guide, which we received in PDF format, and I use right from the computer. Additionally, the children have gotten to taking audio dramas to their room to listen to while they fall asleep.

Let's take a closer look at this amazing, 2 and 1/2 hour audio drama. 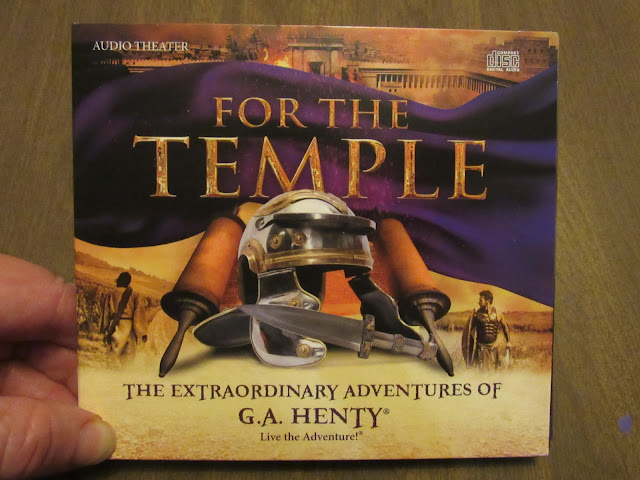 As in all the previous releases, our story begins with Mr. George, who is meant to be G.A. Henty. We love the passion with which Brian Blessed voices this character. This time around, Mr. George is in Vienna, Austria, and meets a completely new person who he gets to share his tale with. If I am not mistaken, this is the first time this character did not translate into one of the characters in the actual story. Though we don't see Ned this time around, Mr. George is writing him a letter as our story begins. Mr. George tells the story instead to Peter Brockhaus, who he becomes acquainted with in the Café Landtmann. During their conversation, he learns Mr. Brockhaus is interested in architecture. It is with this revelation that we segue into the story about the destruction of the Jewish temple in Jerusalem in A.D. 70.

The adventure actually begins a few years earlier, in A.D. 67. It was quite exciting to realize this story takes place a few years after another Heirloom Audio story we reviewed 2 1/2 years ago, Beric the Briton. In fact, we had pulled that CD set out recently, as we have been learning about Ancient Rome and the beginning of Christianity. While that story shared some history of Britannia and the burning of Rome in A.D. 64, For The Temple is set primarily in Israel.

First we are introduced to Nero, who is not only dealing with stomach issues, but is frustrated by the rebellion of the Jewish people. He sends Vespasian, along with his son Titus, to deal with the sedition. We then switch to a couple of the other main characters in our story, John and Mary. When we first meet them, they are out in the vineyard where John is teaching Mary to care for some diseased plants. Their vineyard is actually quite well-known, which plays into this adventure more than once.

These two young people are meant to be married, and they are spending some time together, under the watchful eye of his mother. That is until Mary impulsively pushes off in a boat on the Sea of Galilee and John ends up having to swim after her. It is here that they find themselves in quite the predicament as a storm has been rolling in. Thankfully they are rescued by Josephus, who becomes interested in John joining him and training militarily. Originally John is opposed to this, as all he wants to do in life is to be a farmer. But he realizes these farming skills and his "book" knowledge will not help him if trouble arises with the Romans. So, he agrees to take Josephus up on his offer, which you can imagine, did NOT go over well with Mary.

Josephus had stated, "The time is coming when every Jew who can bear arms will be needed in the service of his country." John spends several months training to become a man who will be able to come to the defense of his country. But, more than that, he desires to be able to protect the temple in Jerusalem. Over the course of the next few years, the Romans fall upon Israel, destroying cities and killing many many Jews. John and his comrades do what they can to stand against them, but they end up losing friends, some of whom are closer to John than others and are quite devastating. Then John comes up with this idea to cause trouble for the Romans by "harassing" them, catching them off guard to slow them down. He becomes a hero to the Jewish people, almost like a legend as there are tales circulating about his deeds that exaggerate what he and his small band of young men have accomplished.

It is during this time that John comes face-to-face with Titus, Vespasian's son, while out for a walk. They fight, though Titus is unaware of who this Jew actually is and what he has been doing to the Roman army. John gains the upper hand. He could have killed Titus, but he stays his hand, showing mercy. They end up swearing an oath to each other. John promises never again to take up arms against Titus, and Titus agrees to protect the temple to the best of his ability.

Of course, if you know your history, the temple of Jerusalem does end up being destroyed. The Romans end up taking Jerusalem, though Titus ordered his men NOT to destroy the temple, honoring his oath to John. Sadly, the soldiers do not listen, and the temple is destroyed, Many, many Jews lose their lives in defense of Jerusalem, and the temple. Those who try to flee are crucified. Truly, it is a sad, sad time for the Jewish people. Additionally, John realizes that it is the actions of three of the Jewish leaders who have really caused all this conflict and destruction. He came to realize they brought it upon themselves, so he no longer had a desire to fight the Romans. He and a friend begin their journey home, but little do they know their adventure hasn't yet ended.

We had a wonderful time listening to this newest audio drama from Heirloom Audio. It really did help to bring this time period to life for our family, especially because we were able to put it into context with other events we have learned about. It was quite intriguing to hear about the oath between John and Titus, which I admit I have to wonder if such an oath really existed. It also surprised me to learn about the wickedness of the Jewish leaders and the part that played in the Romans destroying so much in Israel. More importantly, we have a couple of brief glimpses of the early Christians, those who were called followers of The Way, and we see how they impacted John and his decisions.

While we enjoy just listening to these stories, I have to say, having the Study Guide sure helps to facilitate the learning aspect. 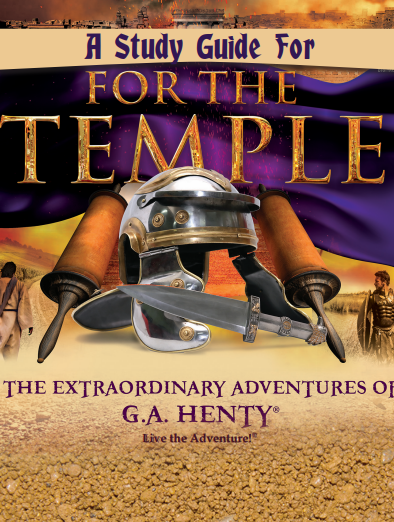 Using the Study Guide while we listen helps us to focus on important points, plus it helps me make sure the children are paying attention. We can make sure we are accurately remembering names and dates, and other details. Each track of the disc has a corresponding page (or two) with three sections. 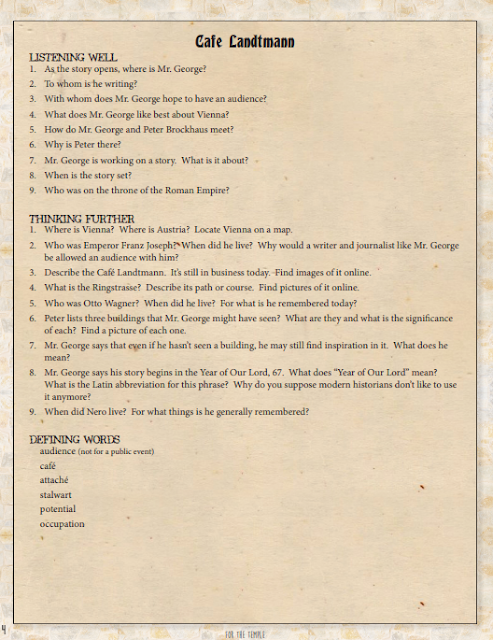 The "Listening Well" section asks literal questions that we can answer by listening carefully to the story. The "Thinking Further" section asks us to dig a bit more. We need to infer, describe, and do some research. We look at maps and images online. We enjoyed looking up pictures of how Café Landtmann looks in present day Vienna. We definitely spent more time in this section than we have in the past, as the children are getting older and are more capable of spending time doing this. Finally, each page has a "Defining Words" section, which pulls out some harder vocabulary that would have been heard during that track.

I also enjoy the tidbits of information that are shared in boxes inset on some of the pages. We learned more about such things as "Food in Ancient Jerusalem," "Sabbath & Shabbat," and the "Siege of Jerusalem." Sometimes there are black and white pictures to help illustrate an important event.

The Study Guide concludes with a list of resources for learning more about the destruction of Jerusalem, three Bible Studies, background information for the story.

Heirloom Audio has produced yet another quality audio theater adventure, and it is one I can highly recommend. We love the sound effects that help to bring the story to life, plus the actors voice the characters wonderfully, as always.

If you are interested in reading my reviews for any of the other adventures we have listened to, you can find them under my Heirloom Audio Productions label.

Don't forget, you can read what my fellow Crew Mates thought about For The Temple by clicking on the banner below.