Heirloom Audio has done it again!! They have produced yet another epic audio adventure based on one of G.A. Henty's powerful books from history. It is no secret that we have enjoyed every release we have had the opportunity to review thanks to the Homeschool Review Crew. This time around, we had the pleasure of listening to St. Bartholomew's Eve, a tale that takes place in France during the time of the Huguenot wars. 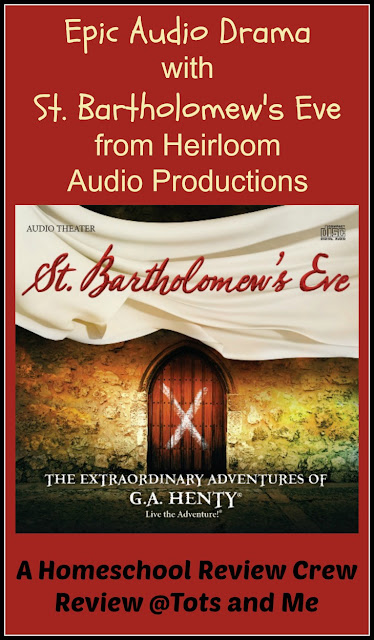 Each Heirloom Audio Productions release helps us live one of the "extraordinary adventures of G.A.Henty" through a two-and-a-half hour audio drama. As with the previous stories we have listened to, we received the 2-CD set. 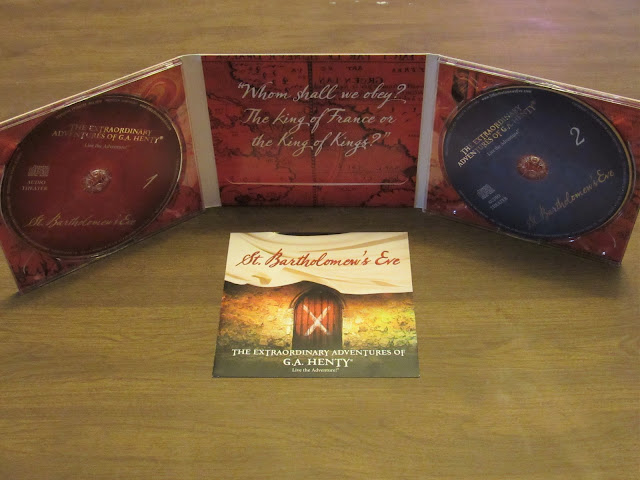 At the beginning of the story, we are reintroduced to a couple of old friends, Mr. George and Ned, along with a new friend named Sebastian who is from France. As with all the other adventures, Mr. George (who is meant to be G.A. Henty) tells the story to a couple of boys, who happen to be the same age as the main characters in the historical tale. Ned and Sebastian were caught "being boys" and skipping the first church service, so they could "experience God outside." Mr. George then reminds them of those who fought and died so they could have the right to worship the way God has placed it upon their hearts to do. Sebastian, of course, understood that Mr. George was referring to the time of the Huguenot persecution and the "French Wars of Religion" that took place in the late 1500's. And from here, we segue into the historical adventure.

The year is 1567, and Philip Fletcher has traveled from England to be with his mother's family who lives in France. It has been his dream to fight alongside those who have been struggling for the right to worship God, as it is his belief that when any one of God's children are persecuted, we are all persecuted. He spends time with his cousin Francois and his aunt and uncle, the Count and Countess De Laville, visiting and training in their chateau until it is time join in the battle. We learn that he has wonderful sword-fighting skills, though he is hesitant to add a dagger, and finds the thought of using a pistol unhelpful as it takes too long to reload.

Throughout the story we are introduced to the different characters as our brave young men either fight with them or against them. They join Admiral Coligny, Prince Conde, Henry, Prince of Navarre, and others to fight against the tyranny of King Charles and the Queen mother Catherine De Medici, along with the Duke of Guise. The Catholic leaders consider such things as eating meat on Friday and the signing of psalms by the common people, along with having a personal relationship with God, as blasphemy. The Huguenots, or the French Protestants, on the other hand feel they have the right to worship God the way He has placed it upon their hearts, following in the path of others during this time of reformation started by Luther several decades earlier.

As would be expected, there are multiple battles and lots of intense scenes in this audio drama, including some brutal, heart-wrenching murders (though there are no gruesome details).

The first battle Philip and Francois participate in takes place in Orleans, which was a Catholic stronghold. Orleans was an unexpected target, and victory here would open passage to southern France, along with encouraging other Huguenots. This battle also contains one of the scenes that was most memorable to Tabitha. Philip had volunteered to watch for the opening of the city gates, but he didn't notice a guard who was shooting an arrow at him. Thankfully Francois had been "watching his back" as he had promised to do, and saved his life. It was also during this time that Philip saw the benefits of having a pistol, as it helped lead to a victory.

Speaking of pistols, during another battle we discover a unique way that Philip has found to utilize the pistol to his liking, which came as quite a surprise when we were listening, to us and the enemy.

As is normal during a war, though there are victories (at times even defeat is a victory when they are still alive), there are also defeats. Additionally, there are times when people are taken prisoner. It is during the rescue attempt of a couple of our characters that a new friend is made, a young boy named Argento, who has recently lost his father. Though they have to leave him behind when they first meet him, Argento becomes an important character later in the story.

Unlike other battles in which Philip and Francois have ridden out with the Huguenots to other locations, there is a time when they must hold the chateau against the onslaught of the Catholic forces. Even though they had held back the attackers for a while, the people had begun to despair, because they knew the Catholics would be coming back, better prepared and with more firepower. During talk of surrender, Argento's voice arose in song, with the first words of "A Mighty Fortress is Our God." As the song continues, more and more voices join in (including our family's), creating a powerful, unified song to the Lord. For me, this was one of the most powerful scenes in this production. The song ended with Argento repeating the final line, and then arose a defiant, "NO SURRENDER!" which was repeated over and over. This led to an unusual, yet effective plan for defense that could only have come from the Lord, an answer to the song. This is actually another one of our favorite scenes; however, I will not share any details, as I wouldn't want to spoil the surprise.

Sadly, these events are all just leading up to the ultimate horror, the massacres that begin on St. Bartholomew's Day, August 24th,1572. Even sadder is the fact that the Huguenots believed things were getting better for them. Though there was still persecution, there was a tentative new peace, which was supposed to become even stronger with the marriage of the Catholic Margaret of Valois to the Protestant Henry of Navarre. Unfortunately, with a few well placed lies, deceit and hints of betrayal, the Queen Mother was able to influence her son, King Charles, to attack the Huguenots, which led to tens of thousands of deaths. These deaths were made more personal as some of the deaths were of characters we had been hearing about. One in particular hit quite hard.

Through all the death and bloodshed, through all the years of further persecution, those who continued to fight did so as their duty toward God, the duty to protect and to remain vigilant against tyranny. One of the most important quotes that stuck in my head, which I discovered is also under the insert in the CD set, is "Whom shall we obey? The King of France or the King of Kings?" This is a question that Christians throughout the centuries have had to ask. "Whom shall we obey? The leaders in the government or the King of Kings?" The Bible tells us we are to obey our authorities... UNLESS doing so will require us to disobey the Lord. Though I admit, I am conflicted due to teachings of nonresistance I have learned since becoming Mennonite. Does God truly want us to fight back and cause more bloodshed? Could the Huguenots have relocated as Mennonites did? How far can we continue to relocate if the lands where we move continue to turn against Christians?

Once again I find myself wondering if I would have had the strength to stand by my convictions in the face of certain death. Once again I am horrified by the slaughters that took place in the name of God by leaders in the church. I had heard about the Inquisition before listening to the first release by Heirloom Audio Productions: Under Drake's Flag, but the story brought it to life and made it more real. However, I had never known of the atrocities committed against the Huguenots. It saddens and frustrates me to realize that those who are to show love through Jesus, could commit such heinous acts. It scares me to see how easy it is to stir up people, and the way people will follow in this mob mentality. However, I am also encouraged to see that people have been able to stand strong with the power of God through Christ.

I highly recommend St. Bartholomew's Eve for your family's audio drama library. Though, if you have sensitive children, I do recommend you listen first to see if you think it will be too intense for them. The recommended age for this production is six and up, and all of my children enjoy listening, though Harold (who is six) admits to not remembering many details, so I am not sure how closely he was listening. This is one reason I really, really wish Heirloom Audio still provided the study guides which we received with most of the other releases. We would use these to review the story, so I could see how much the children were understanding. It also helped us to understand the details of the story which could be missed, and I have to tell you, there are a lot of details that were tricky to follow, especially name of people and locations. These were more difficult than in other stories as they had to be deciphered around the French accent. Granted, you can do as I did and do your own research into the Huguenots; however, the study guides would have been so helpful.

As always, Heirloom Audio Productions has done a wonderful job bringing history to life. The cast and acting were wonderful as always. The sound effects and music truly do bring us right into the story. Though I have to say, I have never been so drawn into the story as we were while joining in with "A Mighty Fortress is Our God." I wonder how many other listeners have lifted their voices to the Lord while listening to this program.

If you would like to see my reviews of the previous adventures, I invite you to check out my Heirloom Audio Productions label.
Don't forget to click on the banner below to see what my fellow Crew Mates had to say about St. Bartholomew's Eve.