Adventuring with a Missionary with YWAM Publishing {A TOS Review}

This year, the children and I have been learning about different countries and cultures with our core curriculum. One of the things I love is that we are learning about different missionaries who have chosen to serve in these areas. However, the book we are reading only gives brief accounts of their lives. When we had the opportunity to choose one book from YWAM Publishing to review with the Homeschool Review Crew, I jumped at the opportunity to read the book Christian Heroes-David Livingstone from the Christian Heroes: Then & Now series. We had just been in Africa, so it seemed like a great time to read about him in more detail. 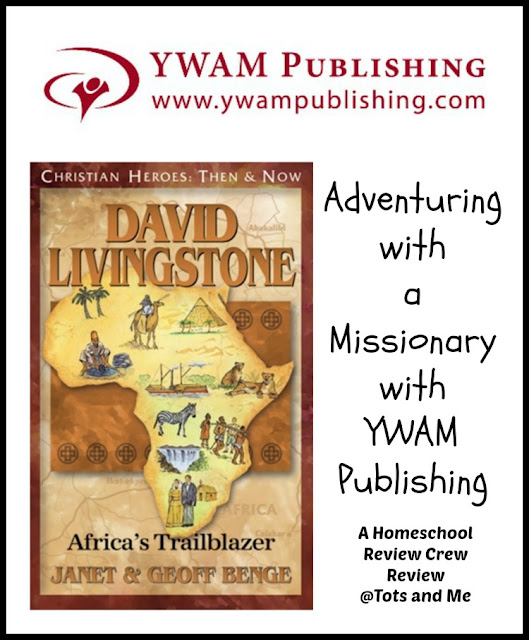 David Livingstone: Africa's Trailblazer shares so many details of this missionary's life in its 214 pages. The authors, Janet and Geoff Benge do a wonderful job telling his story. They have many books available in both the Christian Heroes series and the Heroes of History series. I actually had the opportunity to review Christopher Columbus: Across the Ocean Sea a year and a half ago. It was perfect timing too, because we were learning about early American History at the time. I loved all the information I learned about Christopher Columbus, though it was a harder book for me to read.

Like the Christopher Columbus book, David Livingstone's story begins with an event that happens later on in his life. I would say an almost fatal lion attack is an intriguing way to capture the reader's attention, wouldn't you? This was actually one of the things we had already known about his story, but there was quite a bit more detail in this account. I couldn't wait to find out what led up to this attack and what happened afterward, but first the authors took us back to David's childhood.

Here we find a 12 year old boy who was "different from everyone else."  He was interested in science, and learning about the world around him. Unfortunately, his father, a poor tea peddler, thought science was not for Christians. He felt that it was wrong to try to discover the secrets of God's creation, instead he felt they should be thankful for it, and stick to worshipping God without delving into the "hows and whys" of it. But David's curiosity couldn't be quenched. Even though he spent his days working in the cotton mill as a piecer, he spent every spare moment trying to read and learn. He took advantage of the school time that the mill owners were required by law to make available, even though it was offered late at night after he had worked all day.

As he got older, his love of learning remained. However, his love of science made him hesitant to give his life to the Lord. Then, at the age of 19, he was introduced to a book titled Philosophy of a Future State. In this book he learned that there were others who believed God and science could go together. Thankfully his father's thoughts on science then changed thanks to a letter shared in church titled To the Churches of Britain and America on Behalf of China by Dr. Charles Gutzlaff. This letter explained the desperate need of missionaries in China. But more importantly, it explained that medical training was a priority, because then the missionary would be able to heal physical ailments while talking to the people about their need for spiritual healing as well.

We see David's determination and persistence as he worked toward his goal of becoming a medical missionary. We are with him as he saves up money to attend college, travels away from his hometown of Blantyre for the first time in his life, and moves on to London to train to become a missionary. In London he is faced with new challenges and obstacles, but he presses on.

Due to the Opium War in China, his plans end up changing. He meets the Reverend Moffat, and learns of the huge need to spread the gospel in the interior of Africa, a place Europeans had thought of as empty wilderness.

The remainder of the book is quite the adventure as we follow David Livingstone further and further into the interior of Africa. Originally he was actually supposed to remain at the Reverend Moffat's mission station, but he wasn't satisfied staying where things were already established when he knew there were so many people who had never heard the gospel message. He spends the rest of his life traveling to new places, reaching out to different tribes, searching for ideal places for mission stations and routes to the ocean. He is joined on this journey by other missionaries, African guides, and even a family as he marries and has children. Though he does spend quite a bit of his time away from his family as he doesn't want to expose them to all the dangers he is facing.

The Christian Heroes: Then & Now book, David Livingstone: Africa's Trailblazer was quite the interesting read. I loved reading about Mr. Livingstone's persistence and determination in sharing the gospel beyond where it was considered safe to go. It was inspiring to see him press on through adversity, sickness, and attacks. I loved that there is a map in the beginning of the book which I was able to turn to when I tried to place where in Africa Mr. Livingstone was at different points in the book. 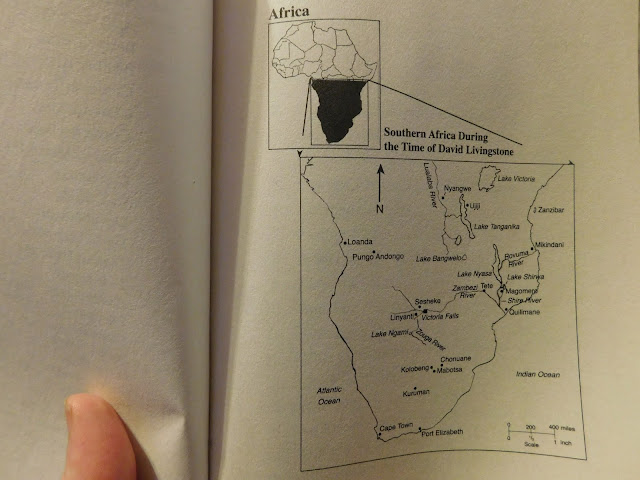 I mentioned earlier in the review that Christopher Columbus was a harder book for me to read. In the review for that book, I had mentioned the lack of dialogue in the book. It was just a straight telling of what was going on. However, David Livingstone was full of dialogue, and I think that was what made it more enjoyable to read. Because of the struggle of reading the Christopher Columbus book to the children, I was originally just going to read this with Tabitha. However, as I discovered that this book was easier to read, I decided, once I finished reading the book to myself, I would then read it to all the children. That is what we are currently doing during our bedtime storytime. They definitely seem to be getting more out of this book. Though I admit I am not sure if it is the book or the fact that the children are a year and a half older.

These are definitely well written, engaging biographies for families to read together to learn about various figures in history. At the back of the book you will find a bibliography of six books cited.

Don't forget to check out the the reviews from my fellow Crew Mates. There are reviews for a wide variety of the books, from both the Christian Heroes: Then & Now series and the Heroes of History series. Not only that, most of my fellow Crew Mates also had the chance to review the downloadable Unit Study Guides that come with the books. While we had the opportunity to use the CD version of the study guide with Christopher Columbus, there was no downloadable study guide for David Livingstone.

Just click on the banner below to check out those reviews: