A Million Fish...More or Less by Patricia McKissack {A Review and Giveaway}

We had the opportunity to review the critically-acclaimed picture book A Million Fish...More or Less by the award winning author Patricia McKissack. This book was originally published in 1992, but was recently released with a newly-designed cover. The cover and the interior illustrations were created by the original illustrator Dena Schutzer. 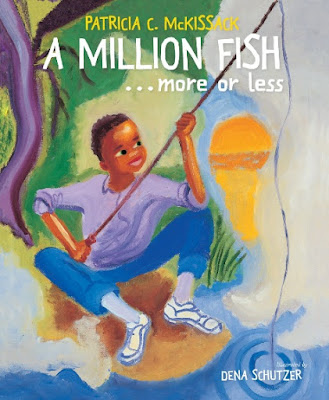 Hugh Thomas lives in the Bayou Clapateaux, a mighty peculiar place. His Papa-Daddy and Elder Abbajon tell the tale of what happened to them back in 1903. They tell about how they caught a wild turkey that weighed over 500 pounds...more or less, along with other unbelievable details. Hugh really isn't sure if they are just joshing him, or if they are telling the truth.

Then, Hugh is left alone on the bayou to fish to his heart's delight. Soon he catches 3 fish, and then ... a million more! Of course he can't wait to share his tale, so he heads toward home. Unfortunately, before he can arrive at home to share his wonderful accomplishment, he meets up with Atoo the grand-pere of all the alligators, Mosley and his army of raccoons, a flock of thieving crows, and a sneaky little cat named Chantilly, who all take a part in cutting down the size of his catch to "just enough for dinner."

Is it all exaggeration and a tall tale, or is there really something strange and mysterious about the Bayou Clapateaux? That is the question the reader is left with at the end of this fantastic tale, as he tells Papa-Daddy and Elder Abbajon all about his adventure.

What did we think of it?:

I had never heard of this book before I was asked if I wanted to review it, but I am so glad I have heard of it now. It is such a fun tale accompanied by illustrations in vivid colors.

You sort of realize that Hugh has to be exaggerating right away, when it says he caught a million fish, as that is a term that is used in exaggerations. However, how many fish did he really catch? Did he really lose a bunch of his fish to those he came across along the way? We know it can't be real, as the animals don't really talk. However, there is still the chance that he caught more than the 3 fish he has remaining by the time he returns home. This is sure a book that gets you thinking.

The one thing parents may be concerned about is that children may think it is okay to be untruthful because the tale tales in the story are made to be fun. Of course, if the child(ren) really believe that these events happened to Hugh Thomas, then there wouldn't be that to worry about. Personally, I didn't have a problem with it, but I did want to make you aware of it.

It is a fun book that is sure to catch the attention of your kiddos. The book is recommended for children 3-7 years of age. All of my children did enjoy it, and they are 4, 6, 7 1/2 and 9, putting them just about in the recommended range, except for Tabitha who is over by a couple of years.

Tabitha: I think it was funny how one million fish and more fish kept getting stolen because of birds and other animals. And then he told the story about his catch just like Papa-Daddy and Elder Abbajon.

Amelia: I liked it.

Harold: I liked it.

About the author and illustrator:

Patricia McKissack is the author of numerous books for young readers, including The Dark Thirty: Southern Tales of the Supernatural, a Newbery Honor Book and Coretta Scott King Ward winner, and Mirandy and Brother Wind, a Caldecott Honor Book illustrated by Jerry Pinkney. Her picture book Never Forgotten, illustrated by Leo and Diane Dillon, was a Coretta Scott King Honor Book and an ALA Notable Book and received five starred reviews. She lives in St. Louis.

Dena Schutzer is a renowned painter and illustration educator, and is the illustrator of many other picture books, including Polka and Dot, which she also wrote. She lives in New York.

Published by the Alfred A. Knopf Books for Young Readers imprint of Random House Children’s Books, the book retails at $17.99. 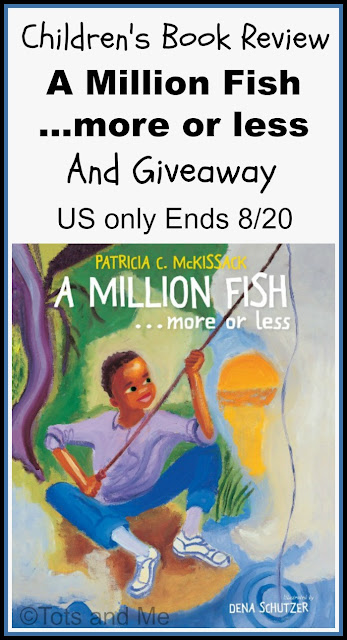 Great news! I have been given the opportunity to offer a giveaway for one person to win their own copy of A Million Fish...More or Less!

This giveaway is open to US residents 18 and over.
The giveaway runs August 1st through August 20th.

Disclosure: I received a hardcover copy of  A Million Fish...More or Less in exchange for my honest review. No further compensation was given. This did not in any way influence my review. I only recommend products I use personally and feel will be a good products for my readers.
Posted by kewkew at 3:54 PM