Expanding Math Knowledge With Expanders from SimplyFun {A TOS Review}

It is no secret that we love to play games, especially games that help the children to learn. So, when I learned that an upcoming Schoolhouse Review Crew Vendor was name SimplyFun, and they had the motto: Learning & Connecting Through Play, I was quite excited to see what game we may get to try out. SimplyFun is a company that provides a wonderful variety of educational games. Whether you are looking for games suitable for toddlers and preschoolers, or games for older children and family fun, you'll want to peruse SimplyFun's site. Not only can you purchase from their site, you can also host parties or become a consultant, otherwise known as a Playologist. Out of all their wonderful games, we were chosen to review Expanders, which is a fun math board game. 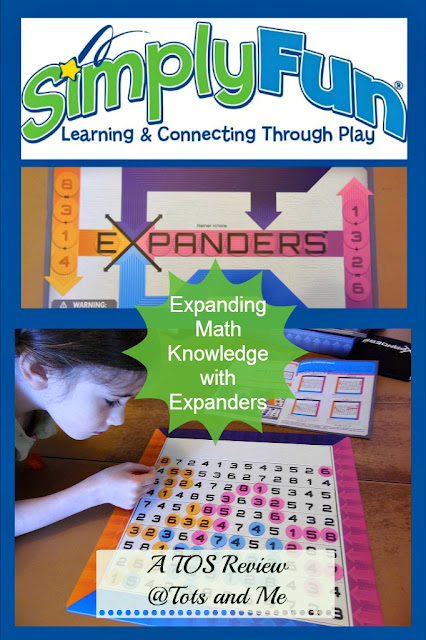 My older girls are at the perfect age to play this great game as the age recommendation is 7 and up. When we received the game, Amelia had just turned 7. Wouldn't you say that is perfect timing? Both girls are working on improving their addition skills and Expanders helps them to really look at the numbers and figure out what other numbers can add together to equal that number. Not only will a child work on reverse addition when playing this game, they will also improve spatial reasoning and critical thinking skills. 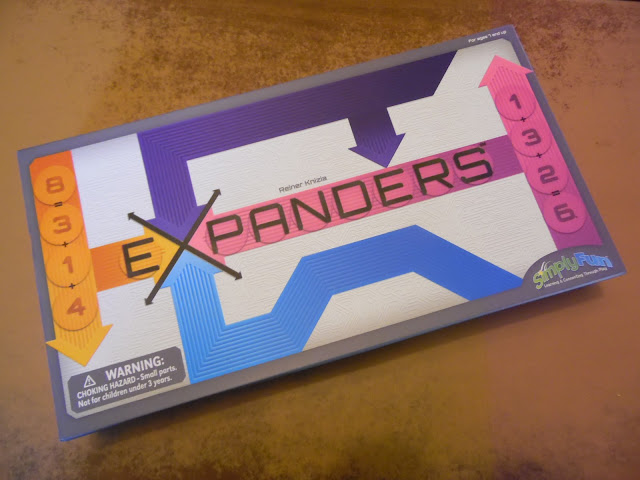 Expanders comes with all the items pictured below: 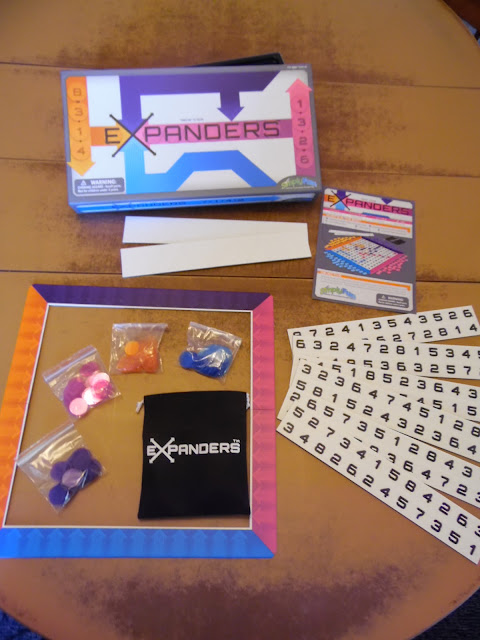 There are 128 plastic expander tokens in 4 see through colors. The colors match the colors on the sturdy cardboard mainframe. A drawstring pouch is also included for storing the tokens. The long rectangular cardboard strips you see above are double-sided number circuit boards. There are also 2 blank "filler" boards. No additional materials are required to play the game, besides a sturdy surface on which to play.

The object of the game is to fill the mainframe with your tokens by finding numbers which have connected numbers that add up to the initial number. The first player to use all their tokens is the winner.

It is quite simple to set up the board for game play. First you need to decide if you are going to play the simple game or the more advanced game. As I mentioned, the circuit boards are double-sided. The first side only includes the numbers 1-8, while the other side also includes 10, 11, and 12. It wasn't until the second time playing that we noticed there is no "9" on either side. I admit, I am curious as to why "9" wasn't included, though it wasn't enough of a concern to affect play. 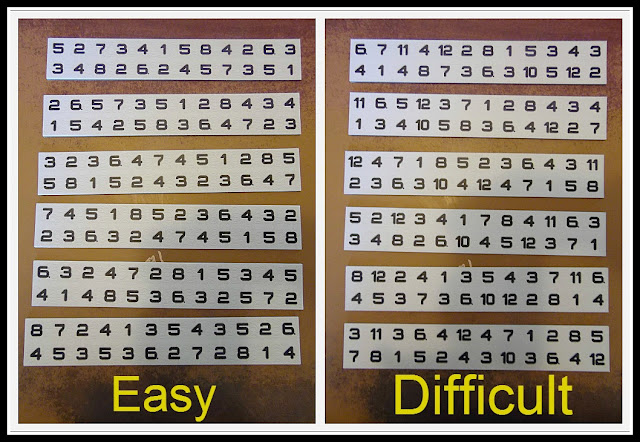 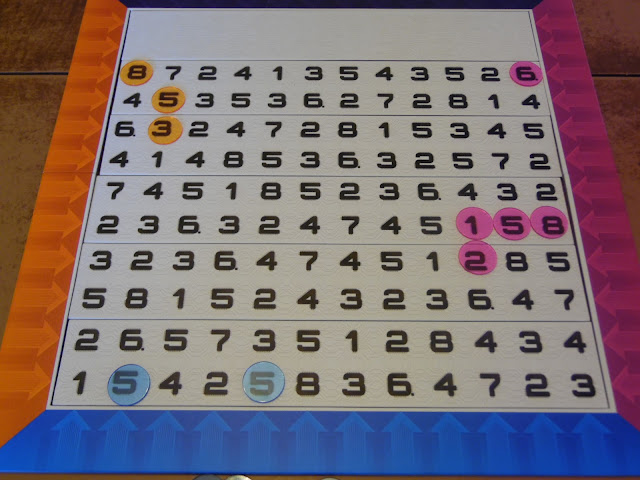 Though a little confused at first regarding how to actually play the game, the instructions are quite easy to follow.  I am apparently a tactile learner, and have to actually work through the instructions to get them to make sense. Each player starts and moves outward from their side of the board in an attempt to cover as many of the numbers with their colored tokens on each turn. Each players' tokens need to start out in their first row, or touch their previous placed tokens.

There are 3 different plays a person can make. They can either play one token, which is most often only used during the starting play of the game, or when no other tokens can be played toward the end of the game. The second action a player could make is to place two tokens on matching numbers, played either on the second play of the game, or when no other move can be made. The most important move is "Expand a Number," which is what a player attempts to do during the majority of game time. 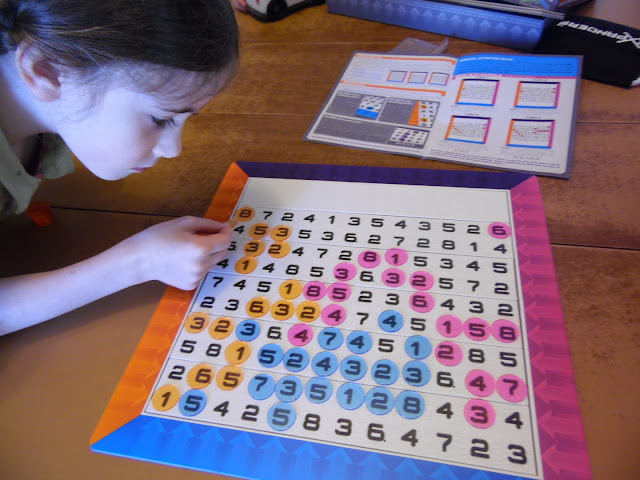 The player places their first token on a number, the higher the better as there is a greater chance to expand, then the next tokens are placed on connected numbers that add up to that number. Strategy comes into play as the players try to position their pieces so they can work their way to controlling more of the board and possibly blocking the other players, limiting their options for play. As you can see in the picture above, my 8 year old daughter (playing with the pink tokens) had expanded her way right across the board, limiting my moves.

Toward the end of the game, we were required to play only one or two tokens at a time, in an effort to be the first one to use all our tokens. It was quite the competition. 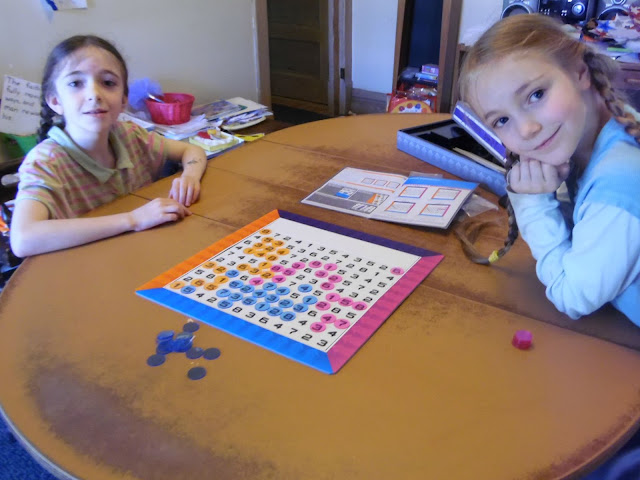 We had started out by playing the easier game as the girls are on the young end of the age range. However, once we finished the first game, the girls were eager to try the more difficult version. 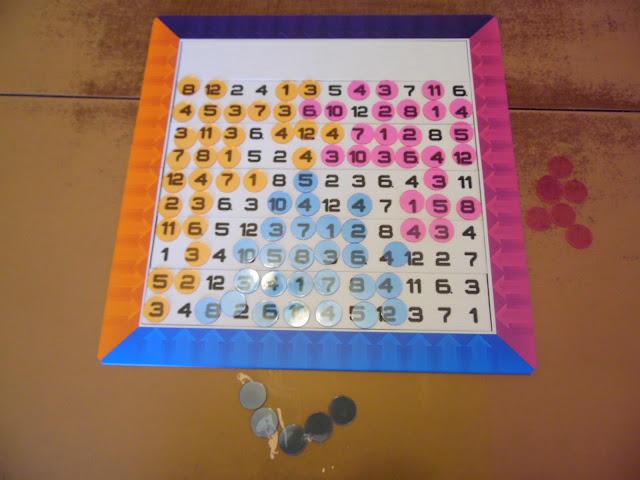 The girls actually found this to be more entertaining, as they were able to use more tokens in one turn as they added up small numbers to reach the goal number.

I have to share this sweet scene as Tabitha gave Amelia a piggy back ride to celebrate Amelia actually winning a round of play. 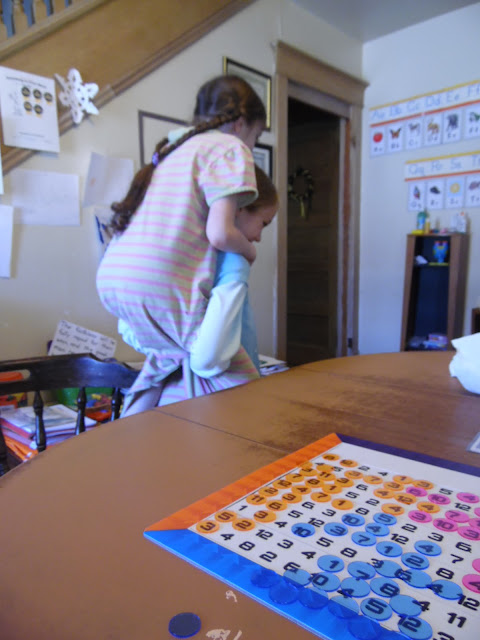 I am amazed at how much fun the girls were having as they worked on reverse addition and learning those math facts. Expanders is a wonderful game that helps children to think about the numbers and figure out how to best use their tokens. I was quite impressed by both the ingenuity and the quality of the game. The circuit boards are very thick, sturdy cardboard which don't bend or get creased. The mainframe unfolds for play, which does cause a slight lift in the middle of the board, but this does not affect the game play.

My husband was a little confused as to why the first player only gets to place one token and the second player only places 2, while the third player can then start expanding. He thought it provided a slight advantage to the 3rd player and couldn't figure out the logic in this rule. Personally, I hadn't thought about it until he mentioned it. As each player is only playing off of their own side or tokens, the other players' moves, especially at the beginning of the game, don't rely on any other players moves. However, as I thought it through, I realized this rule helps the children to see a gradual progression of expansion. From playing one token, to playing two matching tokens, then being able to expand using three tokens, and finally, for the remainder of the game, to playing as many tokens as you can on each turn. Luckily, the hubby ended up winning that game, so that slight advantage he thought I had didn't affect him too bad.

I am so glad I have discovered SimplyFun through the Schoolhouse Review Crew. They have many games that look like they provide wonderful family time, along with a great learning experience for the children.

My fellow Crew Mates had the choice of reviewing Expanders or Shape Whiz, which is for slightly older children, ages 10 and up. You can read the other reviews by clicking on the banner below.