Well, we got a little more done this week than we have recently. Though I am upset that I was unable to get the felt roses made. I had felt cut out, but I couldn't find my sewing kit. Finally found it packed away in the closet. So I kept the same activities up on the shelf for the girls to work with. But they really didn't seem interested this week. Amelia did use the tonging once, and she used the tongs correctly to pick up 2 of the pompoms on the build-a-snowman tonging.

Sorry to say I only have some pictures for the projects this week. As I came to write this post I realized my camera grew legs and walked. GRRRRRR! Tabitha said something about them having it in the playroom closet, but as yet I haven't found it. Needless to say, mommy is a little frustrated. I will share the additional photos that are still on the memory card when I find the camera. Which had better be soon.

Our words this week were: rat, rainbow, rabbit (these 3 we found sign language signs for), robot, rolly polly (the potato bug) and radish (which I couldn't find signs for). I think we will be doing Rr again next week as I still have project ideas we haven't started and some we could do more with. But here are the projects we were able to complete:
We made rainbow fish following the instructions found here. The girls painted a paper plate (out of which I had cut a wedge to make the mouth and the tail), then they glued on tissue paper scales and foil scales. 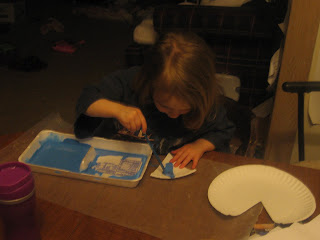 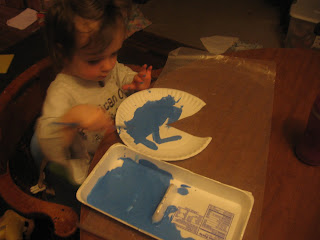 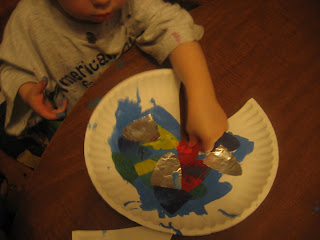 Here is a picture of what the finished product should look like.
The girls enjoyed the book The Rainbow Fish.
We made robots out of "junk" found around the house. The heads were made out of their Valentine candy boxes. Once I cut off the curved portion that had made them look like hearts I had nice little square boxes. The girls wrapped them in aluminum foil. Then I hunted through the closet and decided to use half of a top flap of a gray cardboard egg carton for the torso. We glued pompoms inside to represent the robot's switches/buttons. I made notches in two toilet paper rolls for each robot and the girls colored them with markers, they became the legs. 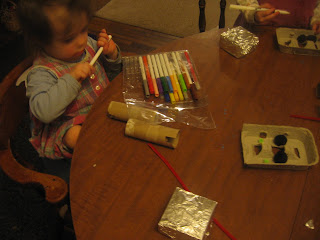 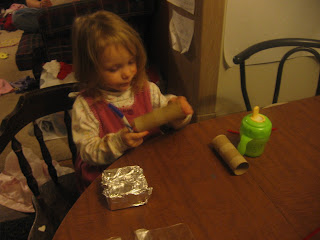 The eyes were made out of milk jug caps and the ears/receptors were those mini cupcake papers. Then we used pipe cleaners/chenille stems for the mouth, to attach the head to the torso and for the arms. 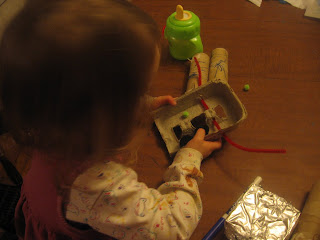 I just made holes in the egg carton so the girls could poke them through. Oh and the nose was a pompom. 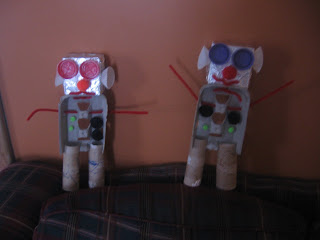 I finally found the song about a robot that I was looking for. I remembered the song from Barney and Friends (back when the older children watched), but could only remember the first line. The girls enjoy the song and playing with their robots. Here is the link for the words to the song.
We also made rainbow pictures. We got to use paint and glue. 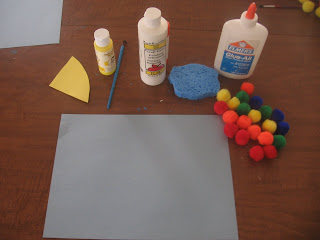 We started out by sponge painting clouds on blue paper. 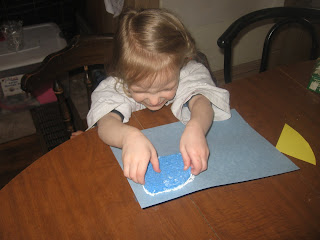 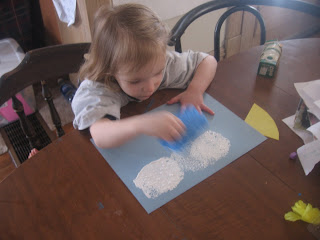 Then the girls glued on a wedge shape of yellow construction paper for the sun. The girls then painted the sun's rays. We used gray paint to dot on raindrops. And then we glued on pompoms for the rainbow. I also asked Tabitha if she could figure out which color started with "rrrrr." At first she said orange, which is close, and then she told me red starts with "rrrr."
As we were on the subject of rainbows I decided we would read the story of Noah and the Ark. I found some coloring pages at dltk-teach.com and we talked about and sang songs of God telling Noah to build the ark and the very first rainbow. We even made a cake. I got the idea from dltk-teach.com, but changed it a bit. The recipe called for round pans and I don't have round pans. So, I baked the cake in my normal 10x13 rectangular pan. We modified the frosting recipe they have on the site because somewhere there must have been a typo. I used marshmallows for a cloud and Tabitha helped me put M&Ms on for the rainbow, after we sorted them by color. And then I added a graham cracker Noah's Ark and animal crackers.
Tabitha really enjoyed her Brain Quest cards this week. She wants to keep going and going and going, even when mommy needs a break. We also worked in her Brain Quest workbook. We are up to the letter E in the workbook. She has 2 pages of recognizing the letter and 2 pages of writing the letter. This week she also wanted to do some number pages. She had to trace the number on the one page and then circle groups of that particular number. We went up to the number 4 in one sitting. She really shocked me. She can recognize groups of numbers up to 3 without counting them. She did get carried away and try to circle other groups. So we are working on following directions.
The girls get to watch one show/DVD/video after lunch, before naptime. Lately they have been watching VeggieTales instead of the Dora or Elmo. Tabitha is always singing songs from the show or bringing up words she heard, like today she was suddenly talking about dungeons and I couldn't figure out where she had heard the word until she explained it. It amazes me how much sinks in to their little brains. (One reason I am now forbidding Animaniacs after my oldest son took it out of the library and after sitting in the room for two minutes I heard them use the word idiots.) Anyway, the other day Tabitha was building what I thought of as a tower with their Duplo blocks. 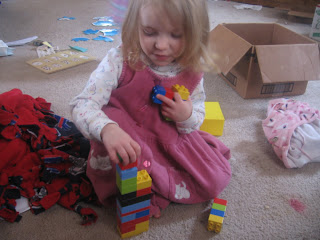 I discovered she was building a wall and then she proceeded to hold it and walk around it and let it fall over. 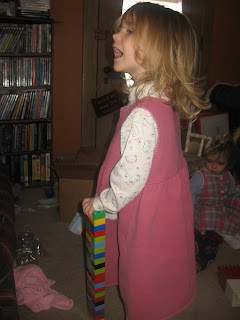 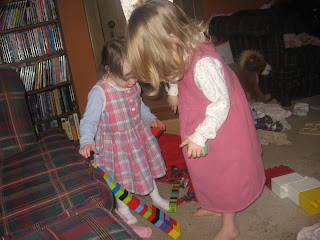