The Fourth Kingdom by Alexandra and Joyce Swann- A Review 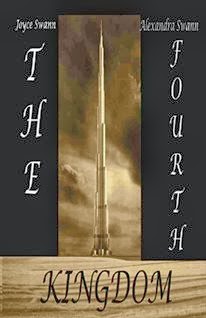 Earlier this month I had the opportunity to bring you the Book Lover's Group Giveaway featuring The Fourth Kingdom and The Force by mother/daughter team Alexandra and Joyce Swann. These are the first two books in The Kingdom Chronicles Series.  I stated that if you were a fan of Suspenseful Christian fiction you should give these books a try. When I was contemplating joining the launch team for The Force we were told that if we were fans of The Left Behind series or Frank Peretti we would enjoy these books. When I think of The Left Behind series I am focusing on the end times and with the Frank Peretti books I think about how battles in the spiritual realm impact our mortal lives. But more than that, I am thinking of good verses evil.

Not only were we given the opportunity to read The Force, we received paperback copies of both books. The Fourth Kingdom and The Force did not disappoint me. There is suspense, good vs. evil, a hint of some end times forces at play, cloning and so much more. Cloning is not something I ever really thought I would be interested in, but it was very intriguing to read, not ultra-scientific, but with enough information to pique my interest and keep me informed.

In The Fourth Kingdom we are introduced to Dr. Alexander Sinclair and Dr. Karl Helmick, both involved in cloning, but living in completely different worlds with completely different belief systems, yet they become close acquaintances who need each other. Dr. Sinclair is a Christian who desires to help others, while Dr. Helmick is focused on himself, monetary gain and a desire to live forever. The Sinclairs have twin sons who are born at the beginning of the book in the year 2000 and Dr. Helmick is guardian to Josef, who is "born" around the same time.

As the book progresses the authors alternate between The Sinclairs and Dr. Helmick over at Doppelganger Genetic Cloning Facility. Their children are introduced to each other, but there is no friendship involved. From the start Jarrod and Joshua Sinclair can sense the evil surrounding Josef, who is also seen as a spoiled brat who gets everything he wants. Josef on the other hand sees the twins as weak because they care about others. As Josef gets older he is taken under the wing of Dr. Helmick unlike any of the other boys at Doppelganger who have been "adopted" by Helmick.

While the basic premise of the book is obvious, there is cloning going on at Doppleganger though not just of cattle, there is so much more that we find out as the story unfolds. Why is Helmick cloning and who is he cloning and how is Josef really related to Helmick? Nazi Germany plays a big roll in the story and Dr. Sinclairs wife is very educated in the history of the Nazi's and World War II.

It is easy to tell where the book is going from the beginning, though there is still enough suspense plus twists and turns to keep it interesting. There were times I wanted to yell at the characters to have them open their eyes as to what was going on in Helmick's cloning facility. As much as I thought I knew what was going to happen in the book, the ending still caught me by surprise. The Fourth Kingdom was quite a wonderful read, one I had a hard time putting down. The only concern I had was how fast it jumped forward in time. In just 360 pages we travel 21 years.

I would highly recommend The Fourth Kingdom to anyone who enjoys Christian Suspense.

Disclosure: I received a copy of The Fourth Kingdom as a member of the Launch Team for The Force. I did not receive any other compensation. Receiving these books did not influence my review and I was not required to write a positive review.
Posted by kewkew at 11:24 PM