M is for Map Skills for Young Children 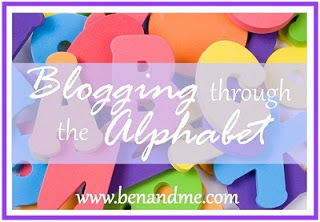 In the past I have attempted doing some map skills with the girls through a map of our town and a postcard exchange. I didn't realize it has been nearly 3 years since we attempted this! I had so many plans, but they were never seen all the way through. So, I have some new plans, starting this summer and hopefully continuing into the school year.

But first, let me share a quick reminder of what we did 3 years ago. We had made a map of our town. I believe I found a map online at mapquest.com or some similar site. I used that to make a map of our town in a file folder. Then we went around town taking pictures of landmarks, such as the library, the bridge and the store. I printed 2 copies of the pictures small enough to fit on the map. One of each picture was glued onto the map and then we used the laminated duplicates to match landmarks as we walked around town. 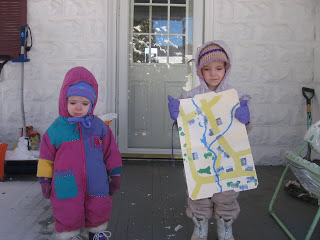 That's our town, 1 mile around.


Here the girls are finger walking around town. 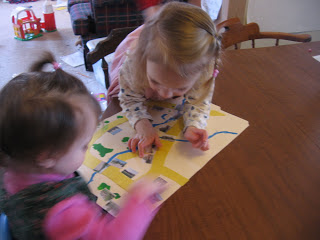 (They have grown up so much. Tabitha had only just turned 3 in this picture and Amelia was 1 1/2)

I thought a familiar area would be the best place for the children to learn map skill concepts. Looking at the ages of Harold and Hannah, it looks like it is time to pull out that map again.

We moved on from the town map to the map of the United States. The same year as was mentioned above, we became involved in a Post Card Exchange. We sent post cards to one family per state and throughout the next several months we received post cards from the same families. I actually still have them stored, but we never did as much with them as I was going to because I had Hannah as a newborn/infant/toddler...you get the idea. We were going to do a state a week and learn about the state bird, state tree, state capital, etc. We were going in the order that the states were admitted to the Union. Unfortunately, I don't think we got to New Jersey. When I talked to the girls a week ago they didn't even remember doing any of it.

Then, two years ago we also did a little work with the globe while using the Five in a Row Curriculum. We would put our story disks on the globe where the story took place. And every once in a while the globe will get pulled out to be used. But we are going to be a little more deliberate in our learning about different states and countries now.

I have joined a Facebook Group called Homeschool Swapping Adventures which is a group for families educating their children at home. There are several different kinds of swapping adventures:
We are participating in the Flat Traveler and the Post Card Swap, plus the girls are going to have pen pals. If you have ever heard of Flat Stanley you may get the idea of the Flat Traveler. My older children had done an activity with Flat Stanley when they were in school, they had to find someone to send him to and the host was to keep him for a while and then send him back with souvenirs to help learn about some place new. We are making our own flat travelers and are going to send them out as a sibling group to a family who will send us their flat traveler(s). We will take them places with us and write down in a journal what we do and where we go. We will also send information about our state and local area. Oh, we will take some pictures too.

Here are the children making their flat travelers. 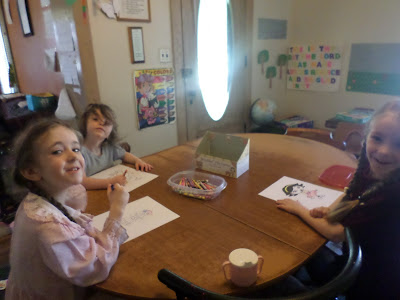 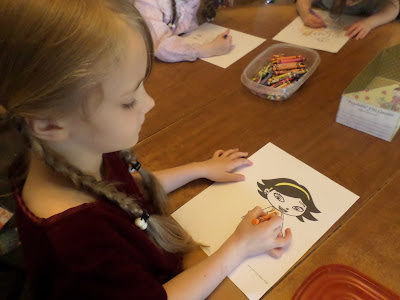 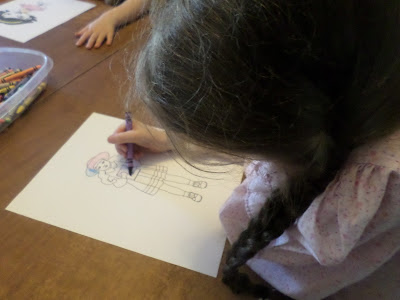 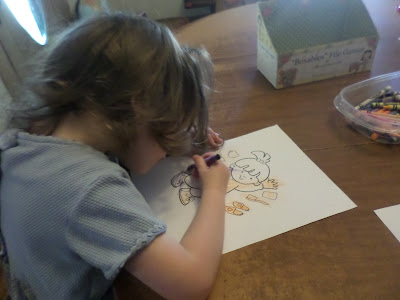 We will be sending them off to a family shortly and can't wait for the traveler we are hosting to arrive. As we participate in this we will be learning about the different states. We will also be learning about different states as we again receive post cards from different states. I am hoping to get one from every state by the time we are done. The girls will be coloring in the state on a United States map. I found one that has the state boundaries and the states' names printed in each, but other than that it is just a black and white blank map. 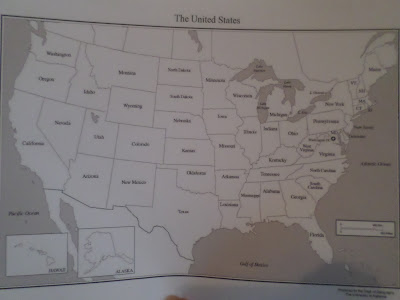 And I found some notebooking pages for us to fill in with some more details.

Additionally, we are going to be reviewing the book Global Art for the Schoolhouse Review crew, so we will be learning about different cultures around the world. I plan to have the girls find the country we are focusing on with the globe and we will read some books centered around children in the country, if I can find some. Finally, we will try to make a traditional meal from each country. I'm thinking that will make a great Kids and a Mom in the Kitchen time.

This will be the majority of what we are doing this summer. I'm sure there will be some other Review Crew things to keep us busy and some lapbooks are a possibility. The books that we read will count toward the girls time for Summer Reading Program, so we are just about all set.

What are your plans to keep your children learning this summer?

I am linking this up to: