Let's see, what did we get done this week.....hmmmmm.......(twiddling thumbs).....oh, right, not much at all.  This was the week of  rearranging the house , internet being down and attending VBS.

No pictures yet of the house rearranging, seeing as I am not done yet.  Four month old babies tend to make finishing projects sort of up in the air.  I sure do hope to have everything in its place by the end of the month.  I have been making plans and I think I am going to enjoy the end result, its just getting there that is stressing me out.  I've also been brainstorming this year's "curriculum," and plan to share that in a separate post, as soon as I work out all the kinks, hopefully sometime this week.

As we were rearranging the house and moving the desk along with the computer into the living room, we thought we had messed something up.  Our internet wouldn't load anything but the one page, then we were getting nothing.  After a phone call to the phone company, we discovered the internet was down in our area.  Okay, big sigh of relief.  Except I needed to get on my blog or email to check the results of a couple of giveaways I had entered.  So, I headed to the library when I realized we wouldn't know how long our internet would be down because the library has a different internet provider.  I was so glad I did.  I discovered I had won two giveaways!  What a surprise for someone who never wins anything.  I won the Pick and Draw card game from Our Hope is in the Lord.  I am so looking forward to having a new game to play with the family.  I also won the science giveaway from over at Homeschooler Cafe.  I thought it was neat to have won this Anatomy Bundle which she had mentioned would be a great way to teach how we are fearfully and wonderfully made.  That was the children's first memory verse for Bible School this week.


Anyhow, once the internet came back up in our town we realized it still wasn't working right for us.  More waiting.  I couldn't get on the internet to print out the pictures I needed for the girls' 2 lessons, so that was put on hold 'til next week.  Finally the technician replaced our filter and we were up and running better than we had been in a while.


So, not much was accomplished this week.  The girls did color their coloring pictures for the VBS coloring contest 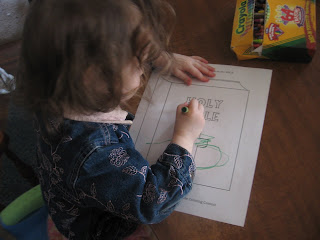 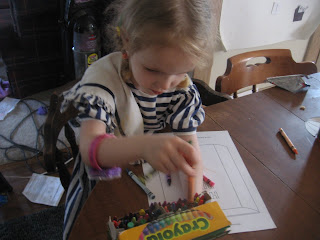 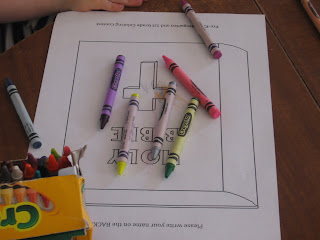 It was really awesome.  Though I missed the motions we usually learned with songs to help remember them.
Here are some pictures from the closing program:
Pre-K class 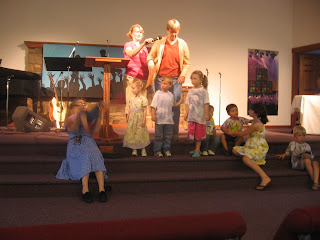 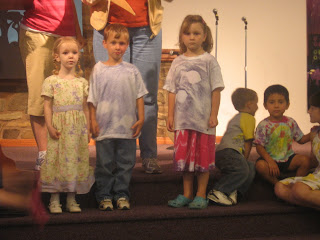 Sharing what they learned each day 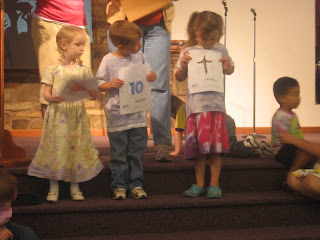 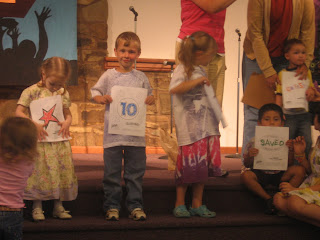 Day 1: Superstars-God made you in His image
Day 2: Ten Commandments-Are you good enough?
Day 3: The Cross-Find out what Jesus did for you
Day 4: Saved- Saved by grace through faith
Day 5: Go Fish-Share the Good News 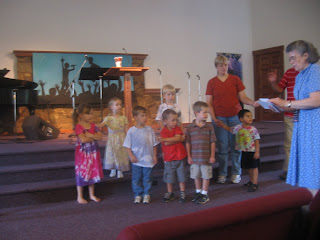 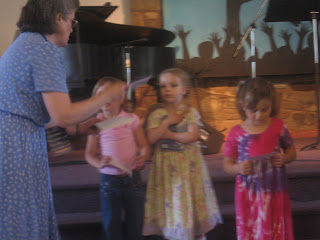 Nice to know she's not shy 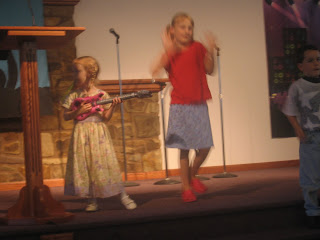 This was taken right before another child took the guitar
away from her.  She was so sad she couldn't have a
guitar too.  Unfortunately, VBS is for children age 3 and up. 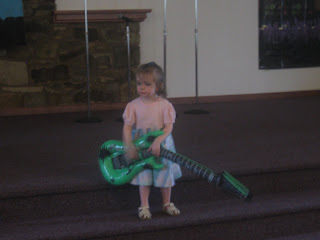 We did play the number 2 game, but I will post that when I post about the remainder of our 2 lessons and our orange lessons.
To see what others are doing with their toddlers and preschoolers head on over to 1+1+1=1 and Homeschool Creations.  I am assuming others had a more productive week.