Reading and understanding God's Word is so very important for us as Christians. There is no denying that. I wonder though, if there are those who are like me, and have a hard time visualizing what life would have been like during Bible times. At times, this makes it a bit tricky to really connect with what is being shared. Well, in the new volume of Drive Thru History®, Dave Stotts takes us on a virtual journey through the Bible Lands, helping us to see what kind of world it was that Jesus lived in. Thanks to the Homeschool Review Crew, we received a copy of  Drive Thru History® – “The Gospels" to watch and learn from. 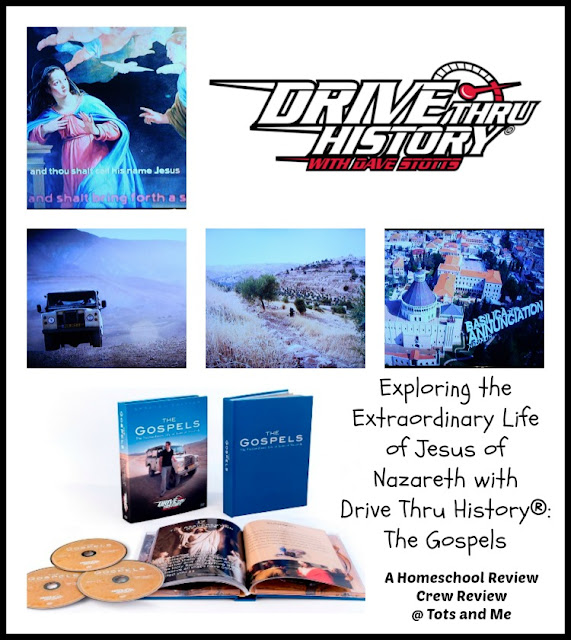 I discovered that Dave Stotts has been taking these on-location history adventures for a while now. He's been to the the Ancient worlds of Greece, Rome, and Turkey, the Holy Lands of the Bible, plus delved into American history, from the time of Christopher Columbus to the time of the Constitution and our new country. I had never heard of Drive Thru History® before, but I am now quite intrigued. In fact, I just learned that a homeschooling friend from church has several of the past DVD's that I might be able to borrow. And I have to say, after viewing this new release that focuses on the Gospels, I am excited to get my hands on some other volumes. Yes, it is that good!

We received the Special Edition, Drive Thru History® – “The Gospels” DVD set which also comes with a Study Guide. In fact, the Study Guide is a part of the casing, which I thought was very cool. And it folds closed just like a book, fitting securely into the sleeve. 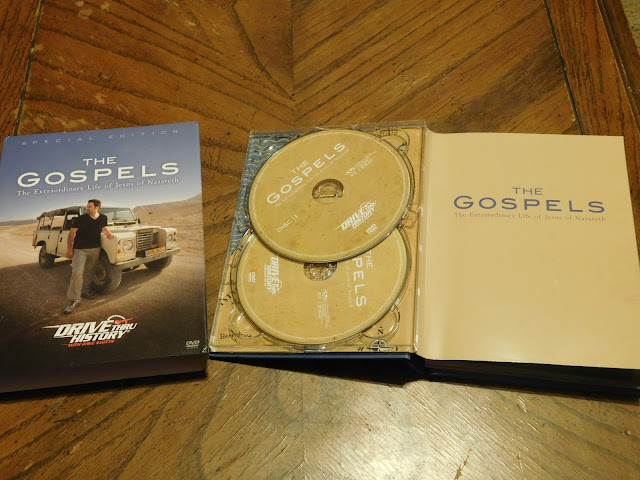 There are three DVDs, two of which are stored inside the front cover, while the third DVD can be found inside the back cover. If you look closely, you will see that there is a map of Bible lands underneath the DVDs. 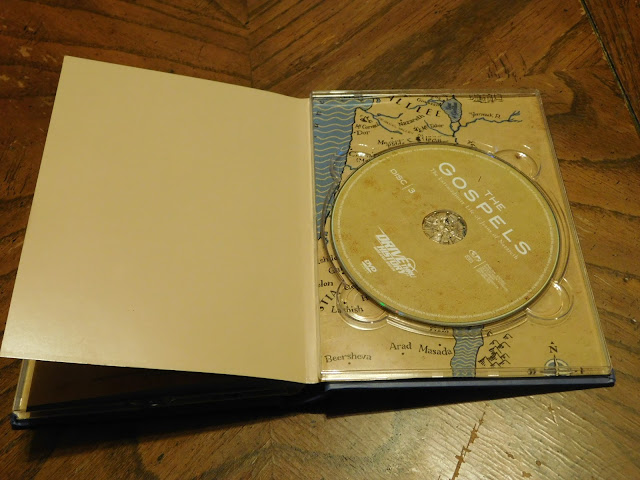 The Study Guide itself is just over 100 pages, and is a real bound book between two covers.

The DVDs contain 18 episodes, six on each disc. Here is the list of included episodes:
Each episode is about 30 minutes long, for a total of nine hours of Bible adventuring.

David Stotts takes us to the different sites in Israel that are mentioned in the four Gospels. That is over 50 locations when they all get added up! He drives around in a 1976 Land Rover (which he loves to talk about, sort of making it a character taking part in the adventure). Throughout the program we are treated to amazing views of the Bible lands, from breathtaking landscapes, to modern cities and towns, and to glimpses of the awesome architecture. 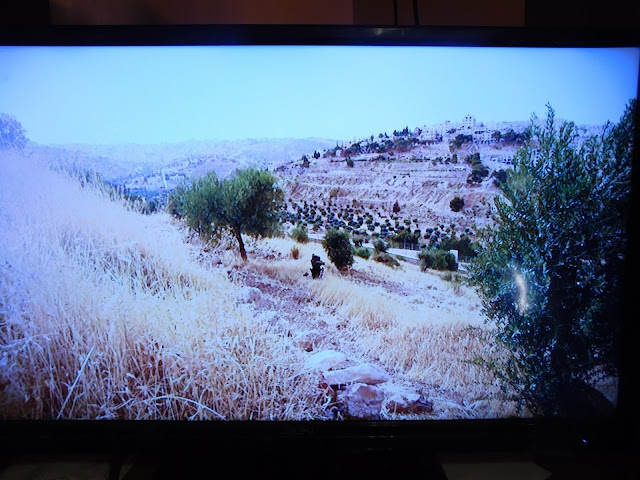 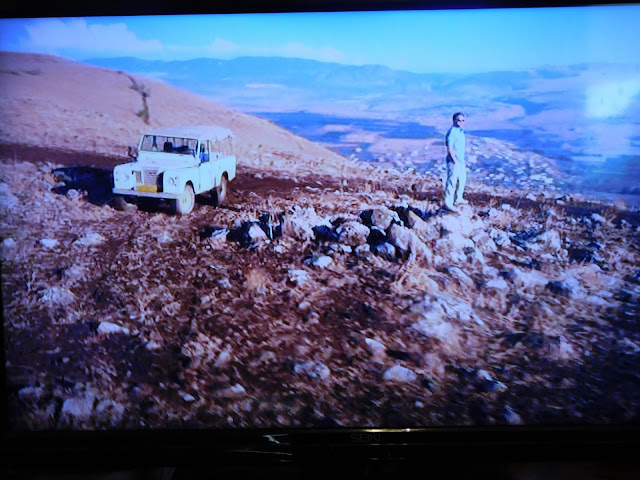 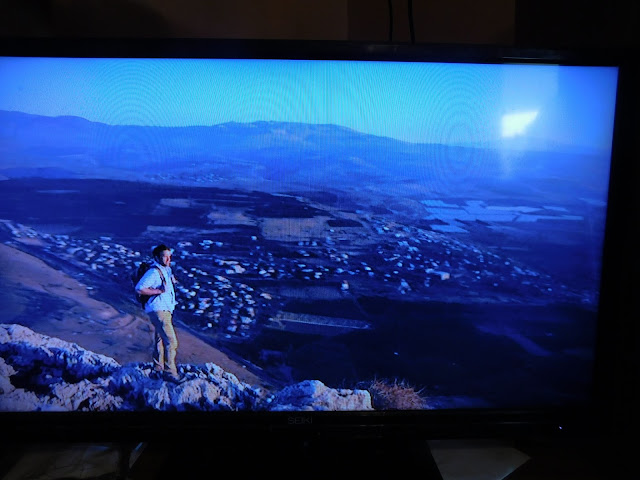 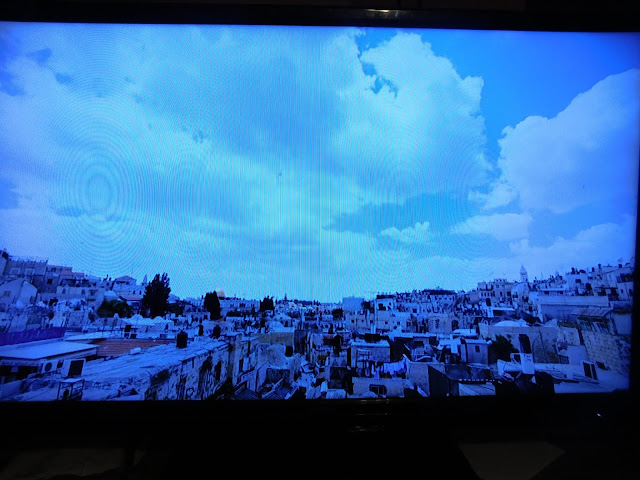 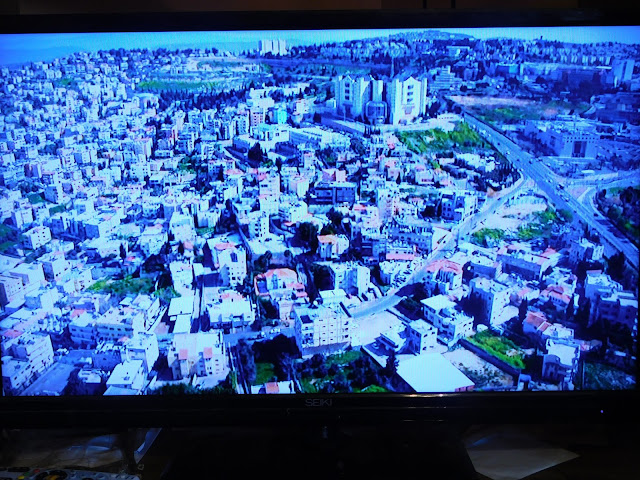 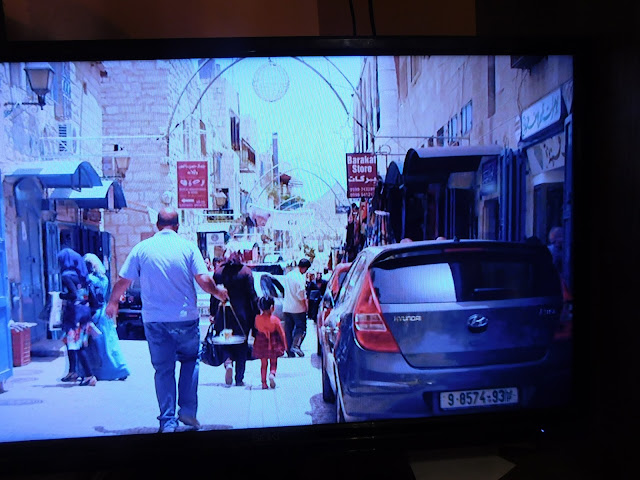 The videos are chock full of information. When Mr. Stotts arrives at a destination, he will walk around, bringing us up close to the places he is telling us about. As he talks, we are also shown images to help illustrate what he is referring to. Lots of different pictures, maps, and paintings are shared, while text appears on the screen. Sometimes there is big bold text announcing the name of the location he is visiting, other times Bible verses will scroll across the screen as he recites them, and yet other times we will see a word and its definition. At times there are also live action scenes depicting life as it would have been during Bible times. We also see modern people going about their daily tasks.

He begins the series with a thought-provoking question:

"Who would you say is the most significant person who has ever lived?"

Obviously, the answer he is looking for is Jesus. But it is through this program that he helps us delve into just why Jesus is the most significant person who has ever lived.

First Mr. Stotts helps us to set the stage by looking at what the world was like when Jesus was born. He travels to Nazareth, allowing us to see what it looks like now, while telling and showing us what it would have looked like 2000 years ago. He explains a little about the four Gospels, explaining that Matthew, Mark, and Luke are the synoptic Gospels, while John, written after the others, is unique. He notes that "no other ancient documents have been as thoroughly scrutinized" and the importance of the fact that we have original manuscripts that date quite close to when the events actually took place. He explains the significance of the genealogy found in Matthew, helping us to understand how important this would have been to the Hebrew audience. Though as a modern reader, I admit to struggling through or skimming over all the genealogies found throughout the Bible, they would have been essential  to the people at the time. In fact, lineage was the key to where a person's place was in society. This specific genealogy demonstrated that Jesus "held the right credentials" and could trace his lineage back to that of King David.

He goes back to Genesis to explain the importance of the Messiah, or the anointed one. From the very beginning of creation, God has promised someone who would restore unity between Himself and mankind. However, Mr. Stotts then explains the political landscape of the time of Jesus, and how the coming of the Messiah had transformed into thinking he would be someone who was going to throw off the oppression they were facing due to the rule of Rome.

As we move through the following episodes, Mr. Stotts continues to explain details that help us understand why specific events would have been significant to the people who lived during Jesus's day. For example, we explore how special it was for Zacharias to have been chosen to go into the Holy of Holies.

We discover the two possible sites for the annunciation. The annunciation is when Mary was told by Gabriel that she was going to have a baby. I didn't realize there were two trains of thought here. There are those who believe Mary was visited in her home, and there is a church called the Basilica of the Annunciation that has been built on this spot, where you will also find a shrine known as the "Grotto of the Annunciation." 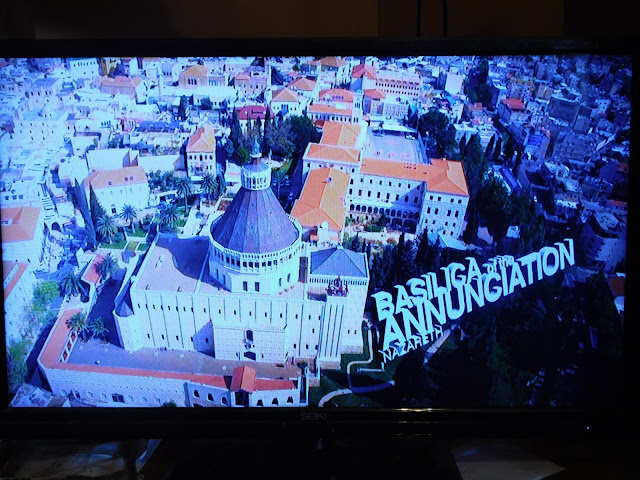 However, Greek Orthodox tradition believes that Mary was visited at a well, so in this location you will find the Greek Orthodox Church of the Annunciation 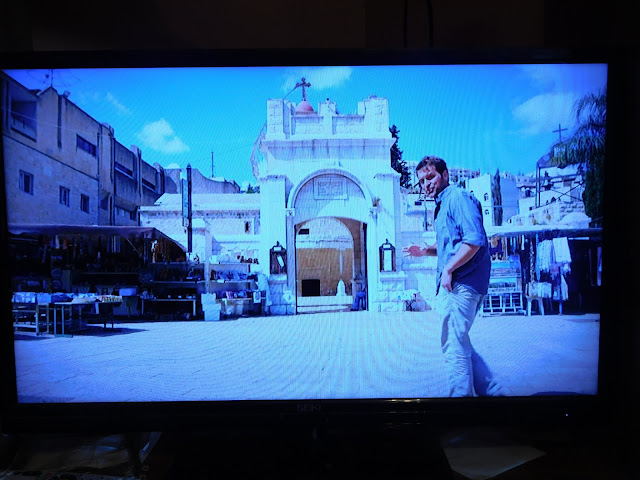 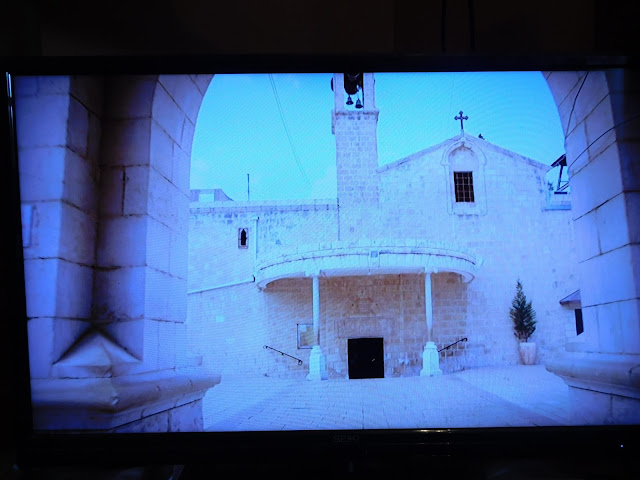 I had mentioned the importance of the genealogies above. In the video we learn about the recurrence of the 14 generations that pass between important people in the Old Testament. There is a 14-point star that represents this at the believed place of Jesus birth, where the Church of the Nativity in Bethlehem now stands. 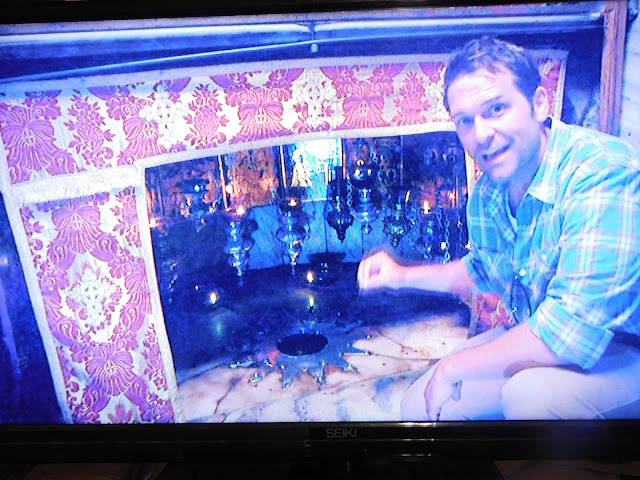 Some of the details he explains, show how our understanding of Bible stories has been influenced by our modern western culture, and so isn't quite accurate. Such as the fact that Jesus most probably wasn't born in a stable or a cave, but in the bottom level of a relative's home where the animals would have been kept to keep them safe at night, because there was no room in the kataluma. Mr. Stotts explains that the word kataluma is mistranslated as "inn" in the Bible. Kataluma is actually in the upper part of the house. 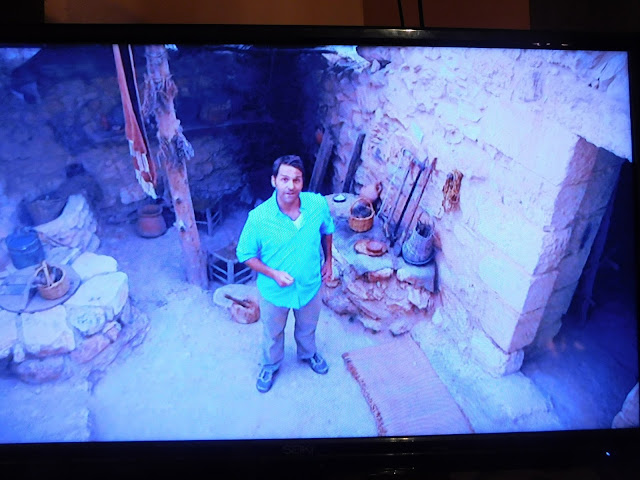 Oh, and that manger, was possibly made of stone. 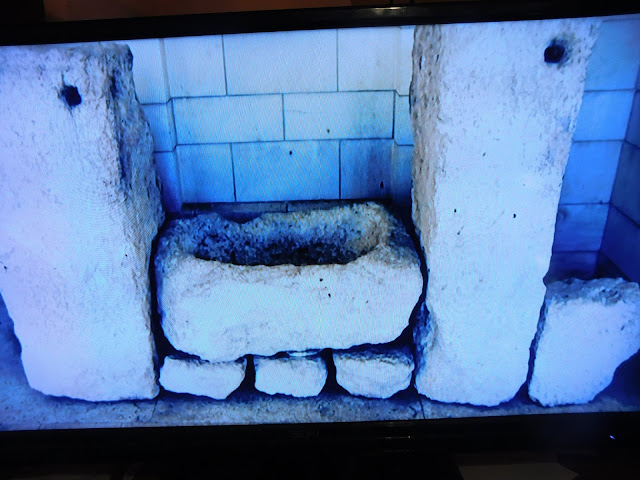 We'd watch one or two episodes several nights of the week. Sometimes we would re-watch an episode because my husband had missed it, as he works nights. The pace in which we watched these episodes, put us right around Resurrection Sunday when we watched the episodes of Jesus's death and resurrection, which I thought was really cool timing.

Something else that made this perfect timing, was that the children had been learning about Jesus ministry leading up to the crucifixion in their Sunday School classes. So when Mr. Stotts began talking about the woman at the well, or when Jesus brought Lazarus back to life, they knew what he was talking about, and learned significant new details. What stuck in their minds the most though, was the detail of the cruelty that Jesus bore when he was scourged and crucified. Fortunately they didn't seem distressed about it, as I was afraid they might be. They just couldn't believe how cruel people could be to other people.

David Stotts is an captivating and humorous tour guide. He really does help us enjoy our journey, while teaching us so much. In fact, he's always throwing in humor, or little tidbits of information, such as the history of the term "Hail Mary" and how it connects to football. (Yes, that might have been quite important in our household.)

Now, I wanted to take a quick look at the Study Guide. After a short introduction, the Study Guide lists the episodes. It then moves straight into each episode. Each episode has four pages of information and pictures. 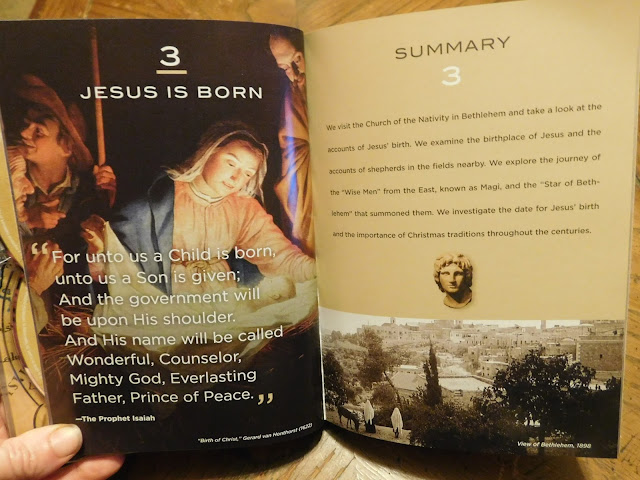 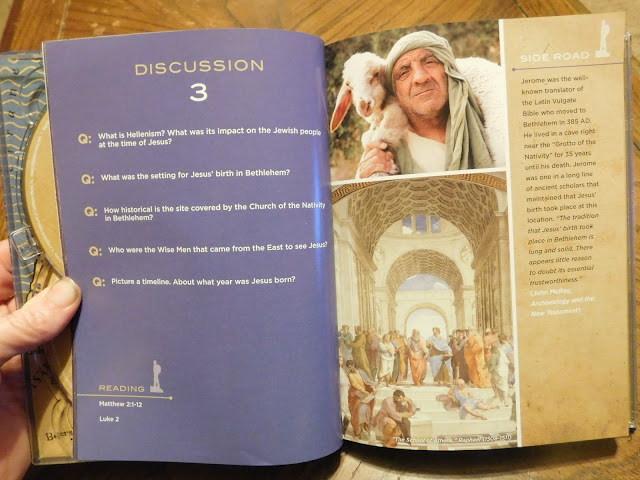 The first page of each episode has a painting relative to the information that will be found in the episode with a famous quote overlaid on top. The second page gives a summary of the episode, and the third gives several questions for discussion along with suggested Bible readings. The last page of each episode shares a couple more images, either painting or photographs, with a section called "Side Road" that gives additional tidbits of information and/or quotes. Between each episode there is a double page spread of lovely photographs.

While I did not use the Study Guide with the children, I have started re-watching the episodes from the beginning by myself, and I am reading the Bible passages and thinking about the answers to the questions.

Drive Thru History® – “The Gospels” is a wonderful supplement to our homeschool curriculum. It is an engaging way to look into the Bible and really dig into it for greater understanding. This would be a great resource for any Christian, not just homeschoolers. I'm thinking it would be a great Bible study for one of our groups at church. It would also be an important addition to any church library. I love that Mr. Stotts references other sources in addition to the Biblical text, such as Josephus.

If you would like to take a peek, you can check out this free episode.

Don't forget to check out what my fellow Crew Mates had to say about Drive Thru History®. Just click on the banner below: