Working on Math with Smartick { A Homeschool Review Crew Review}

I thought it would be fun to allow Amelia to take a break from her normal math, so I asked for the opportunity to review the online math program called Smartick thanks to the Homeschool Review Crew. 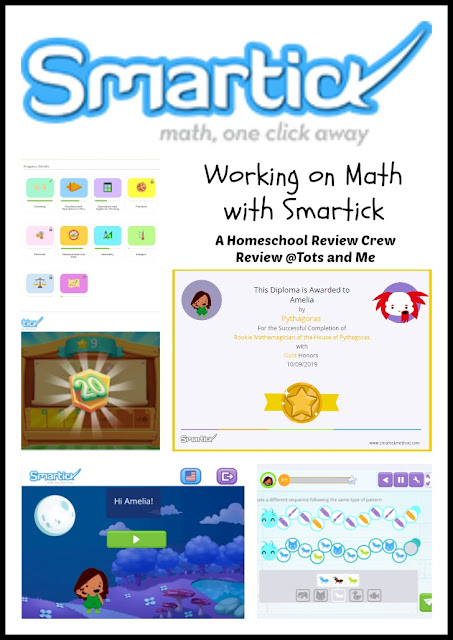 We received 6 months of access to this math enrichment program. In this program, designed for children ages 4-14, a student works on math. However, that isn't all. The program also incorporates reading comprehension, logic, and reasoning to help improve problem solving and critical thinking skills. Smartick adapts to the child's learning needs thanks to artificial intelligence. Each day the child's lessons will be based on what the program determines the child needs to work on. Smartick covers the following topics:

This screenshot shows the progress she has made so far in each area. 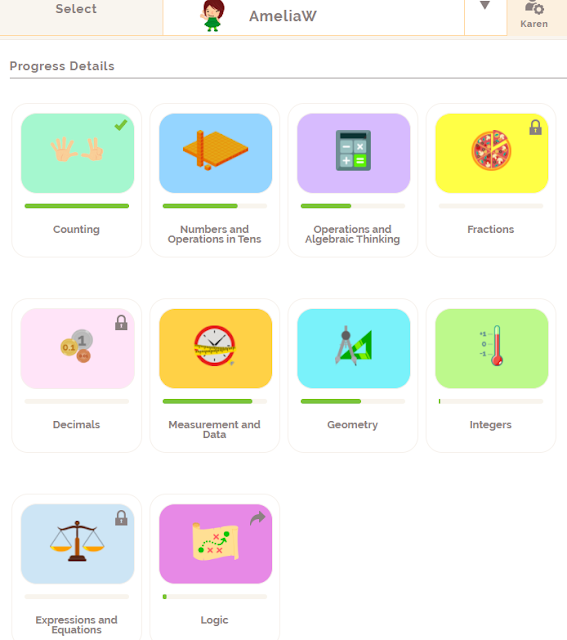 As you can see, the program has had her working primarily in five sections: Counting, Numbers and Operations in Tens, Operations and Algebraic Thinking, Measurement and Data, and Geometry. She's also done a little bit with Integers and Logic.

Here are some of the types of problems she has worked through. This is a sample of the 70 problems she worked on during her session on October 23rd.

There was multiplication and division. 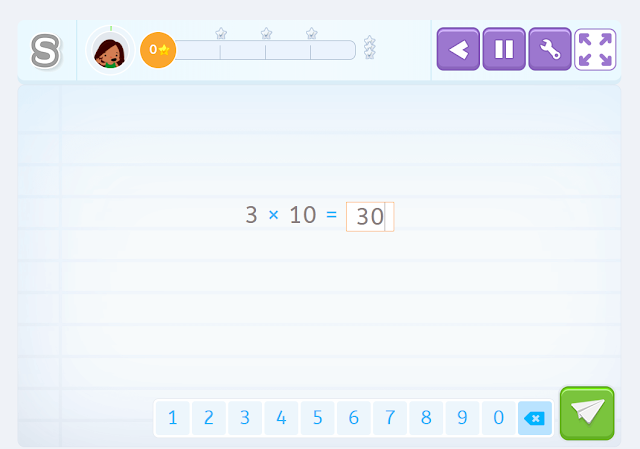 Then she needed to work with a number line. 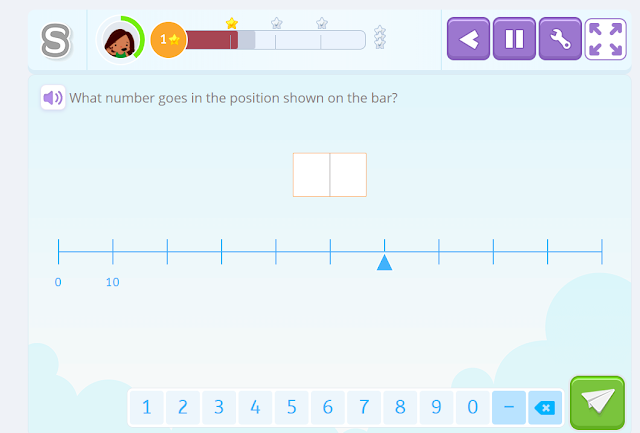 And some more multiplication and division. 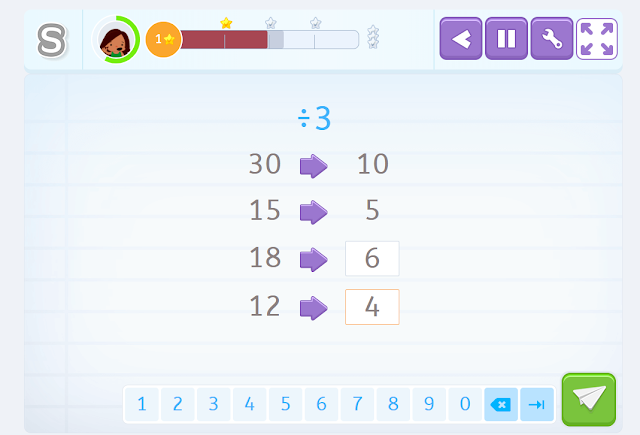 Plus working with patterns. 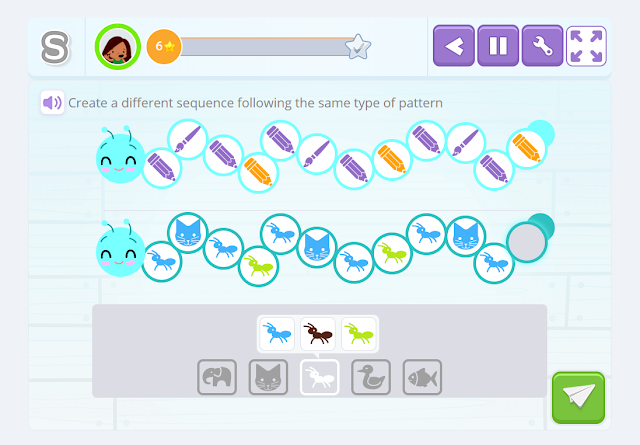 Some days the work is harder than others and she struggles more.

These problems represent a couple of the kinds of problems she has had difficulty with. 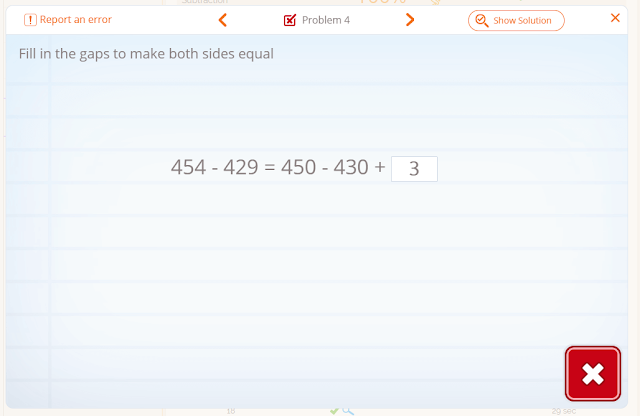 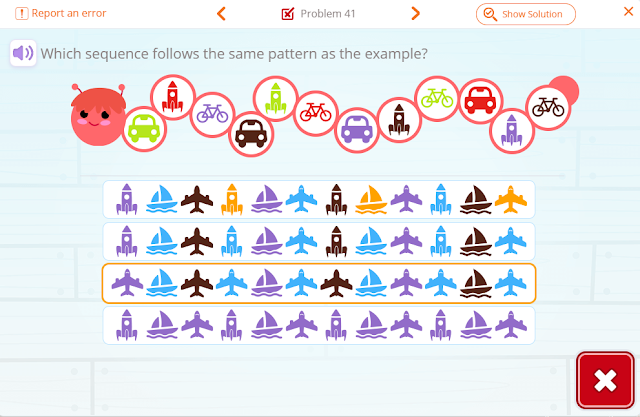 The thing is, I think she could actually figure these out, but she is rushing to get done before the timer runs out. Honestly, that is one of her biggest complaints about this program, which has caused a lot strife when it comes to having her work on her math. She feels way too rushed and can't concentrate. Though she isn't a fan of Smartick, I can see the benefits.

As a parent, I get daily email results, immediately after Amelia finishes her session. Not only does this tell me that she actually got her math done, but it tells me what she worked on and how she did. The email gives me a brief overview of the day's session. She's had days when her results were quite poor, her speed was slow and her score was low. But then she has days when she receives an Outstanding.

Here are her results from yesterday. 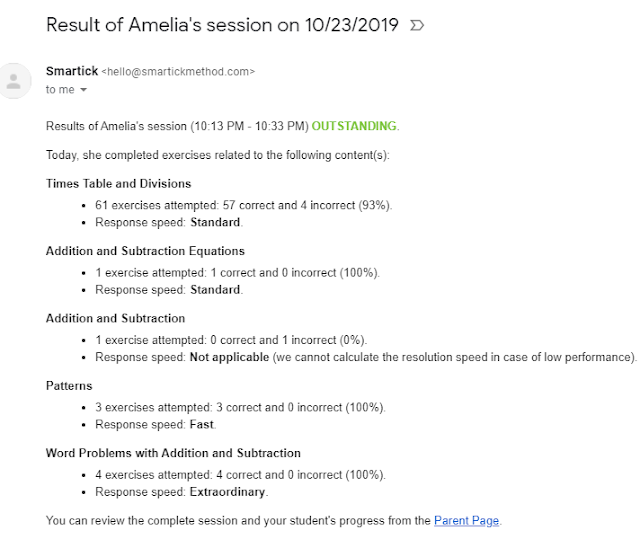 I appreciate that I can see more detail on the Parent Page of the site.

The calendar shows the days Amelia did her math session. The different colors represent how she did. Red is Improvable, yellow is Satisfactory, and green is Outstanding. There is also one day (October 1st) where it is gray. On this day she actually gave up and didn't finish the session because she got frustrated. Then there is the diploma which represents a Revision Session and the light bulb which represents a Logic session. The only other icon that is different is the paper and pencil image that represents a Level Assessment, which she had back when she first started in September. 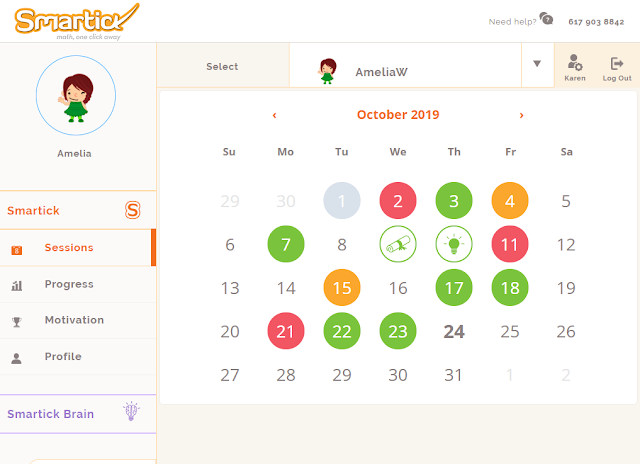 I can click on any of the circles to see more details.

In the screenshot below I clicked on the October 23rd circle. This tells me she did Outstanding, her performance or grade is 92% and she worked at standard speed. I can then click on the orange "Review session" button to see more details. 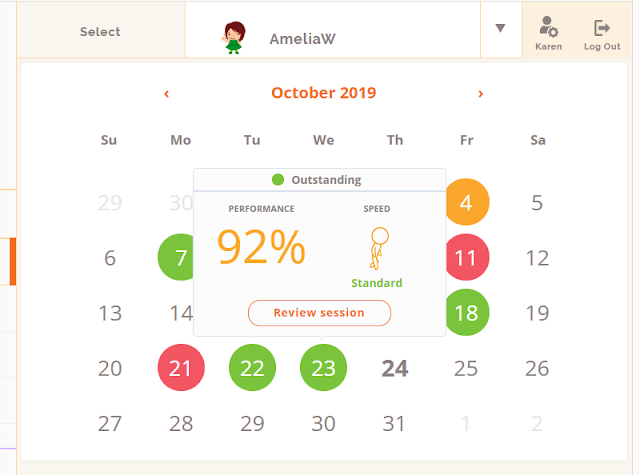 Now I can see how long it took her to do the assigned problems for the day. Though she only has to work for 15 minutes a day, it took her 22 minutes to complete the work. So, I'm assuming if it takes her 15 minutes or less to finish the work, that will be counted as Extraordinary speed. I like that the grade is then broken down so I can see what her performance was in each category and how many exercises she had in each of them. 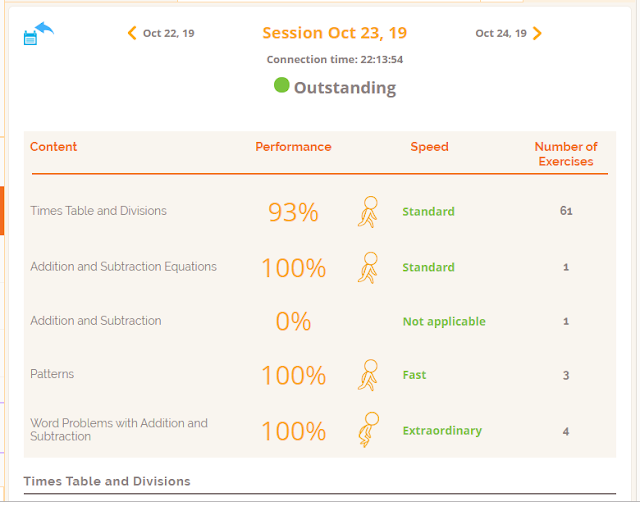 I can then scroll further down the page to see the results for each problem. 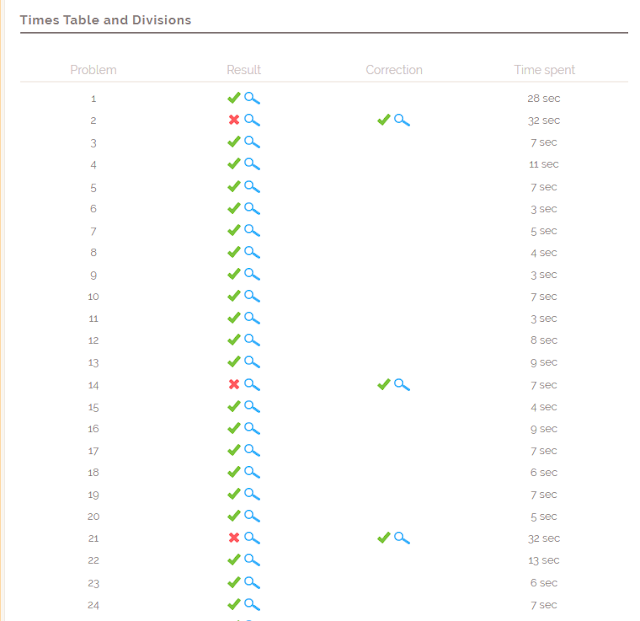 As she works through the sessions she earns "ticks" which can then be used in the virtual world. 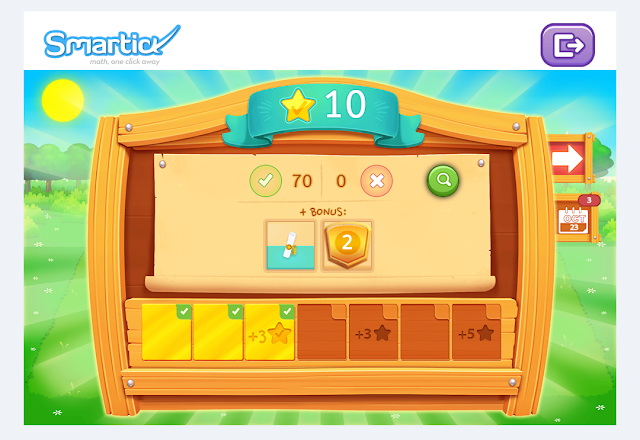 As a child progresses, other rewards such as diplomas are received. 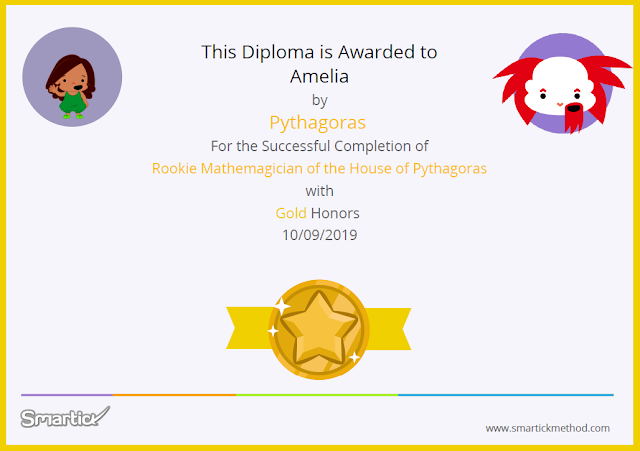 Clicking on the diploma image in the results box will allow the child to see what the next diploma they are working toward will be. 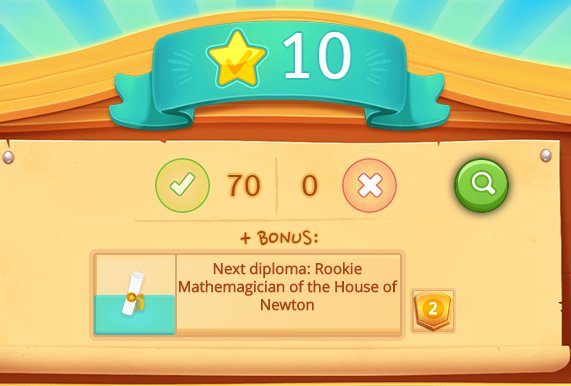 Of course, children these days tend to enjoy the motivation of being able to play with their avatars in the virtual world. Here the student can do such things as make friends, shop, and even play games. 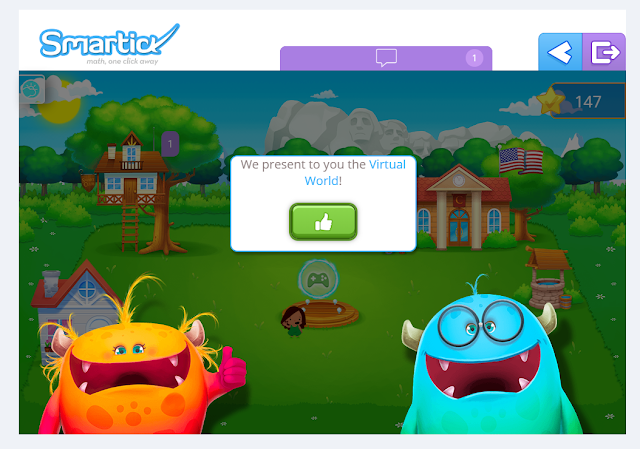 The ticks that can be spent in the virtual world plus the diplomas that can be earned are wonderful ways to motivate a child. I can definitely see where Amelia has improved with her recall of basic multiplication and division facts since using the program. However, in addition to not liking the "being timed" factor, Amelia does not like that she isn't taught lessons. She gets so frustrated and it is quite a fight to get her to do her math. When I asked her why she didn't like the program she said, "I don't like it because it doesn't tell you how to do the stuff, and then it gives you a short time limit to figure out the answers to the questions. But it doesn't ever teach you. And several of the questions are confusing and I have no idea what they mean."

I also realized I'm not fond of the fact that I don't know what grade level she is working at. Some of the problems seem way to simple, such as this word problem. 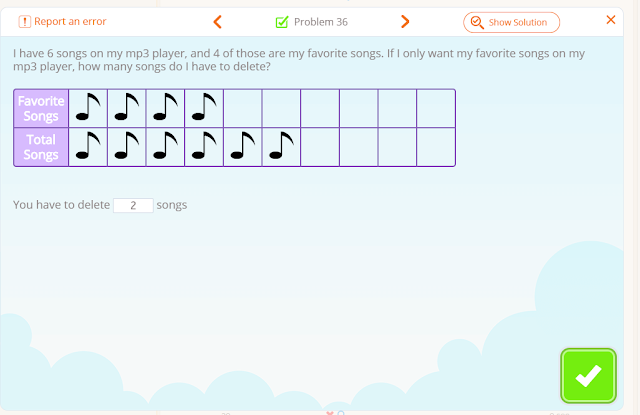 At first I was thrilled because I thought she was doing so well with word problems. Then, I realized the problems seem way too simple for a 6th grader.

So, is this a program we are going to continue using? I'm honestly not sure. I know Amelia doesn't like that it doesn't actually teach the lessons. Of course, this is because this is more of a supplemental program. But, if she has to work with another program as her main math program, I am not sure if she will want to get on Smartick for extra math work. I can definitely understand her frustration when she doesn't understand what she is supposed to do or how she is supposed to do it, especially when she has to beat the timer or she is marked wrong. However, having the motivation of taking care of her hamster in the virtual world has made her consider possibly continuing working with Smartick.

Sadly, I am unable to give this math enrichment program a glowing review. There are definitely some good aspects of the program, but I feel like she is not getting the math education she needs at this point.

Don't forget to click on the banner below to see what my fellow Crew Mates had to say about Smartick.