Picture Book Saturday (on a Monday)

Well, I've been mentioning for the past several weeks that I was going to start posting Picture Book Saturday. Unfortunately, it just hasn't been happening. Then I was all ready to do so this past Saturday, and we had to get going to a wedding and didn't get home til late. The plan is for this to become a weekly feature, where I share the picture books we have been reading as a family, focusing specifically on the books we are using for homeschooling, though sometimes I may add in some of the other fun books, especially if there is one that we really enjoyed. The chapter books the older girls and I are enjoying are shared about in my Fun Fiction Friday posts.

We are finishing up our Exploring Countries and Cultures curriculum from My Father's World during our summer homeschool session. During this time we have been reading books featuring Australia and coral reefs. 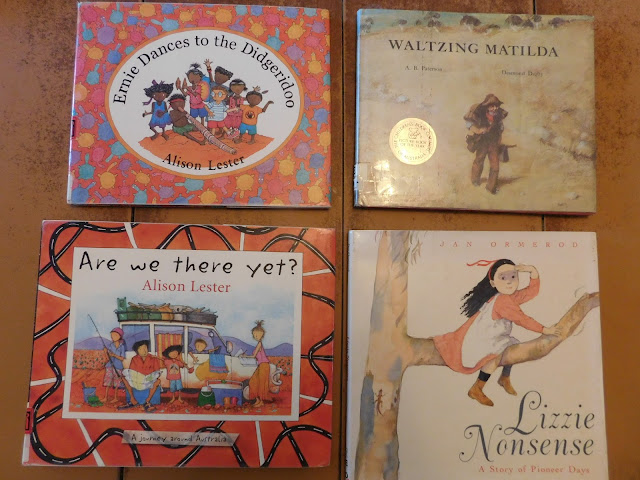 Ernie Dances to the Didgeridoo by Alison Lester was about Ernie going to Australia and writing letters to his friends about what it is like in Australia. Then at the end of the book they all send a letter back.

Are We There Yet? by Alison Lester is about an Australian family that takes a trip all the way around Australia, sharing details about the various places they stop.

Lizzie Nonsense: A Story of Pioneer Day by Jan Ormerod is about a girl names Lizzie who lives during the pioneer days in Australia. Everything Lizzie talks about, her mother says is nonsense as Lizzie uses her imagination quite a bit. 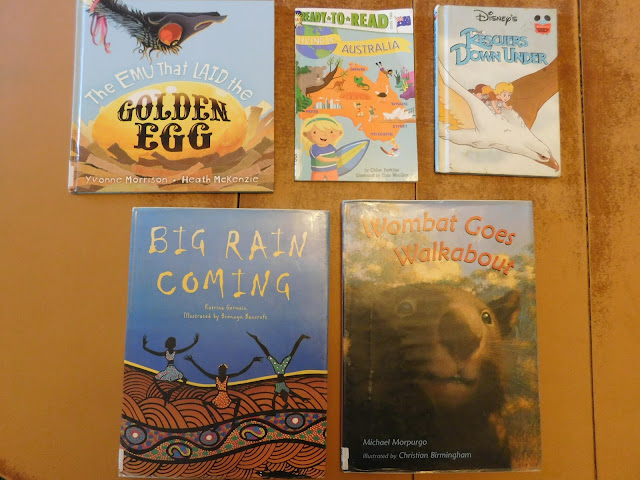 The Emu That Laid the Golden Egg by Yvonne Morrison is about an Emu named Emma whose eggs resemble the things that she eats. If she eats gold, she lays a golden egg, if she eats cotton she lays a pillow egg. She was birdnapped by some critters who wanted her to lay golden eggs, not realizing she had to have gold to actually lay the golden egg.

Living in . . . Australia by Chloe Perkins is a book that shares simple information about Australia.

The Rescuers Down Under is the book adaptation of the movie of the same name. The mice from the original The Rescuers story are back. This time they need to save a young boy from a poacher who is after a golden eagle and her eggs.

Big Rain Coming by Katrina Germein is about a man who knew there was a big rain coming, but on each page it wasn't there yet. Finally it arrived.

Wombat Goes Walkabout by Michael Morpurgo is about a wombat who is looking for his mother and meets up with a lot of other Australian creatures. All of the different animals bragged about the different talents they had, making it appear that poor little wombat's skill of digging wasn't important, that is until he helped save them from a fire by digging a hole for them to stay safe. 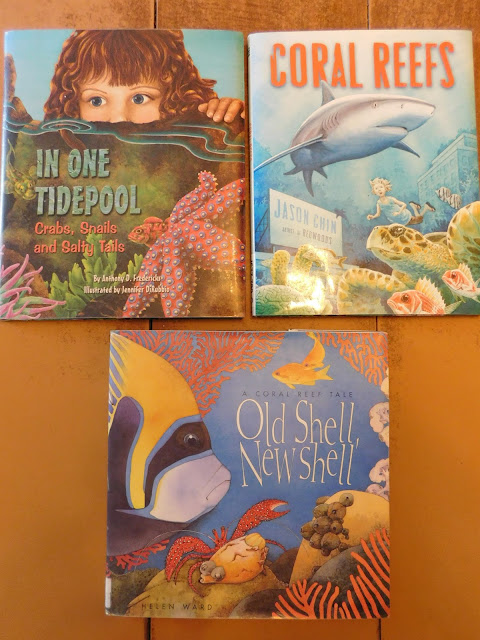 In One Tidepool: Crabs, Snails and Salty Tails by Anthony D. Fredericks is about a girl finding a tide pool and discovering all the creatures that live there.

A Coral Reef Tale: Old Shell, New Shell by Helen Ward is about a hermit crab in a coral reef who is looking for just the right new shell.

In my Picture Book Saturday posts, there will also be a section where I share the children's favorite books from the past week(s).

Thanks for stopping by. I hope you can come back for a visit again soon.
Posted by kewkew at 11:25 AM