Perhaps you have heard about the benefits of including music in the learning experience. I know for myself, it is easier to bring to mind something that I have learned set to music. And, of course, there are those catchy commercial jingles that seem to stick in our memory. Music is an important part of learning and Rock 'N Learn has successfully been creating educational DVD's and CD's, and more recently Mobile Apps and iBook versions, since its founding in 1986. I love that the goal of co-founders Richard and Brad Caudle has not changed in all these years. Their aim is "providing children with programs that would make learning easier and fun." 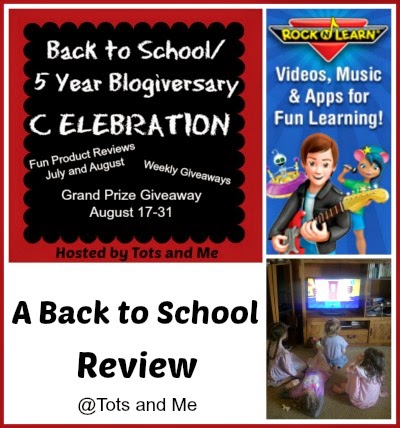 We have been privileged to review Rock 'N Learn products in the past. We have reviewed a couple for younger children (Dance with the Animals and Letter Sounds), a couple for beginning readers (Sight Words and Sight Words 2), and a math DVD (Money and Making Change). When I contacted Rock 'N Learn regarding my Back to School/5 Year Blogiversary Giveaway they graciously allowed me to review one of their new DVD's, "Learn a Language." 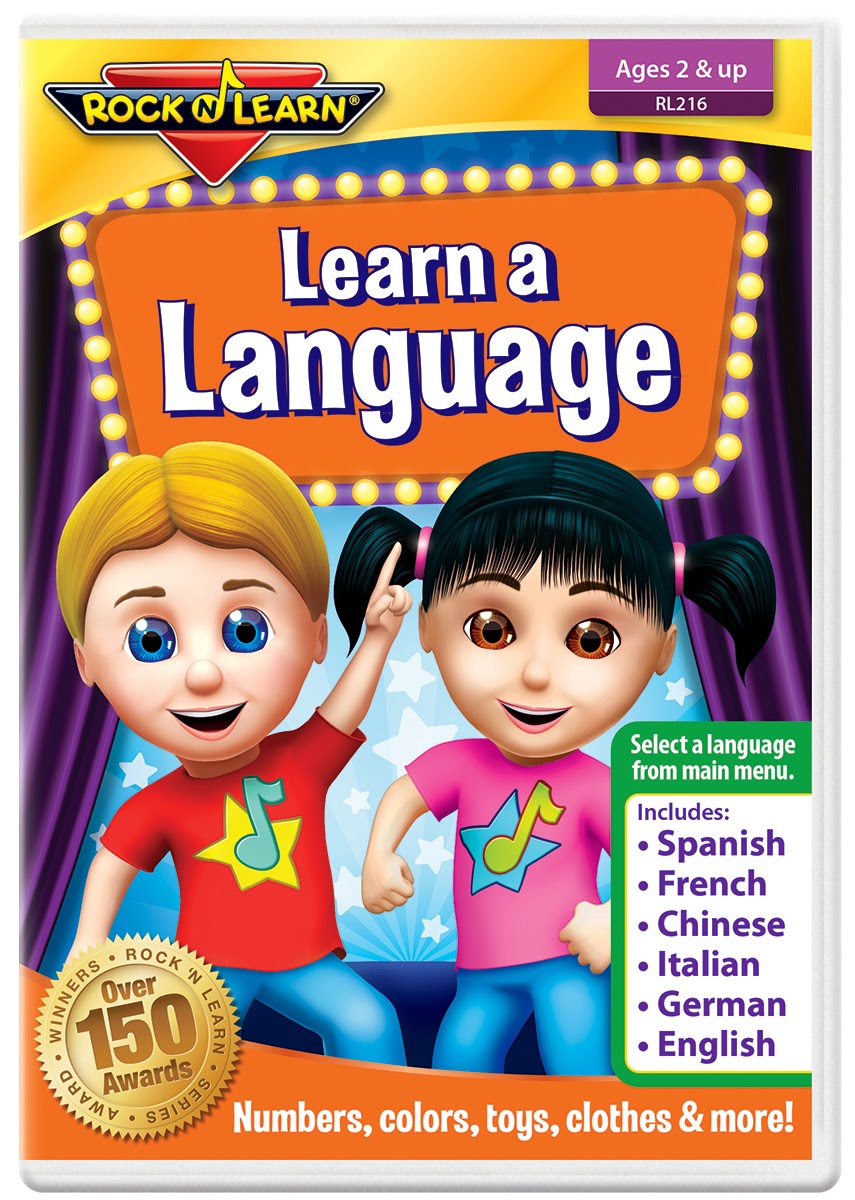 In Learn a Language we were reintroduced to our friends from the Letter Sounds and Sight Words DVD's we have loved. Brad, Susan, Festus, Chip, Word-Bot, and the Rock 'N Learn Kids join together to teach us not one, but 6 different languages. This DVD is geared for children ages 2 and up, so it was great for all of us.  Yes, I said all of "us" because mommy wanted to learn as well. So, while the children gather around the television, mommy sneaks peeks while I am doing other things. 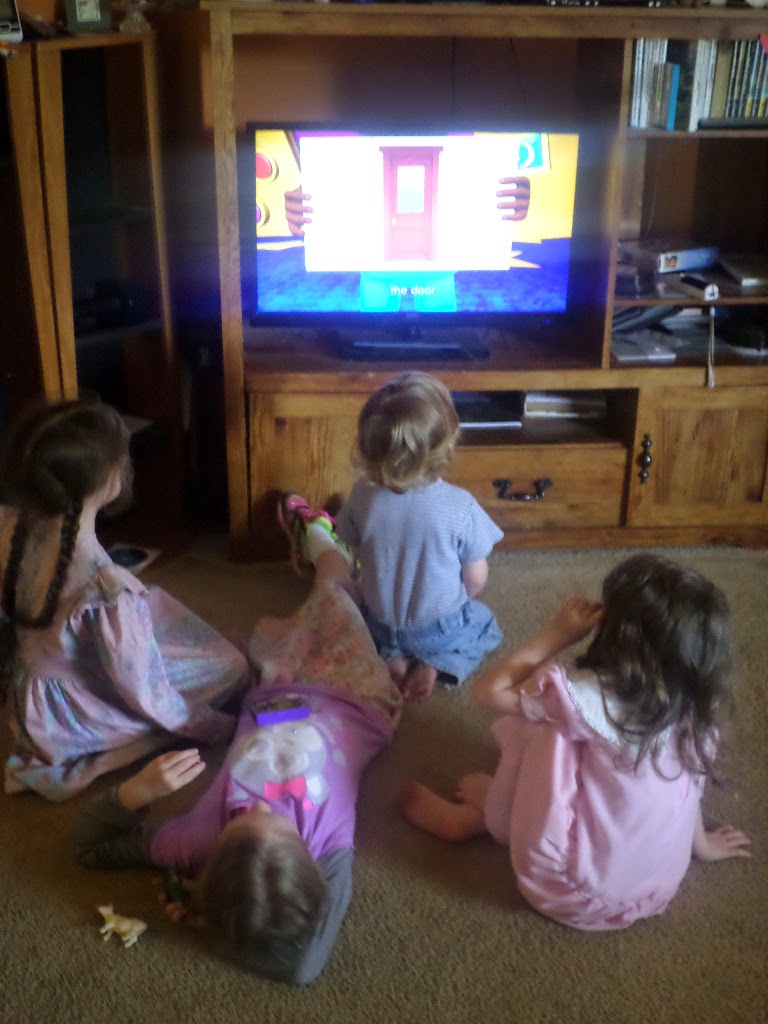 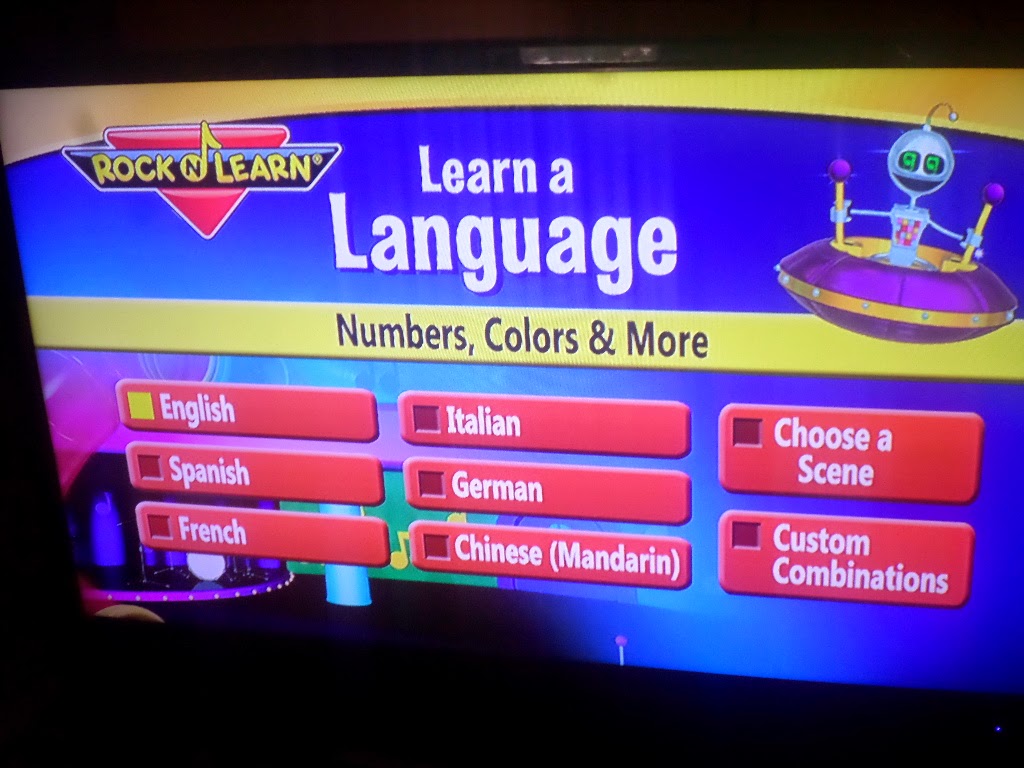 We have been focusing on Spanish, so we chose "Spanish" from the "Select Audio Language" menu. 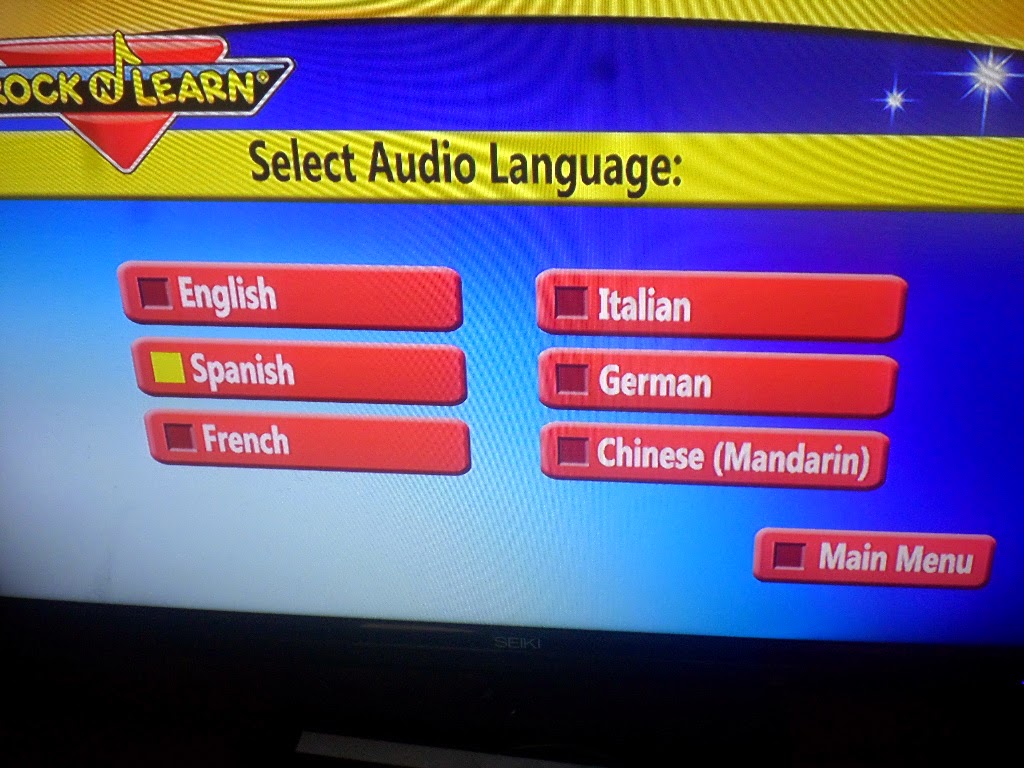 We were then given the option of no subtitles, or subtitles in our language of choice. I decided the older girls could read well enough that having the subtitles in English would be the most beneficial to start with. In this way they can be sure of the translation. 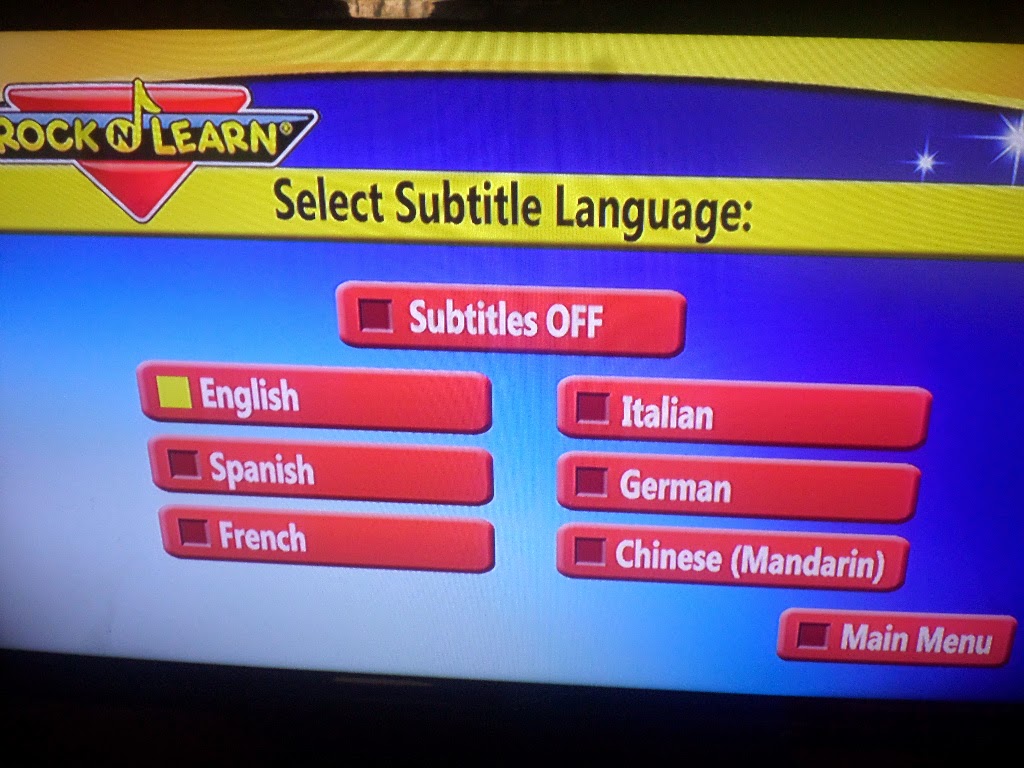 As the characters said the words in Spanish, we were able to read what they were saying by reading the subtitles in English. There is a lot of repetition to ensure the words are learned. Both Brad and Susan will say the word as the object is introduced and "lit up." (Actually, what appears to be Brad and Susan talking as it is actually native speakers taking the role of Brad and Susan.) 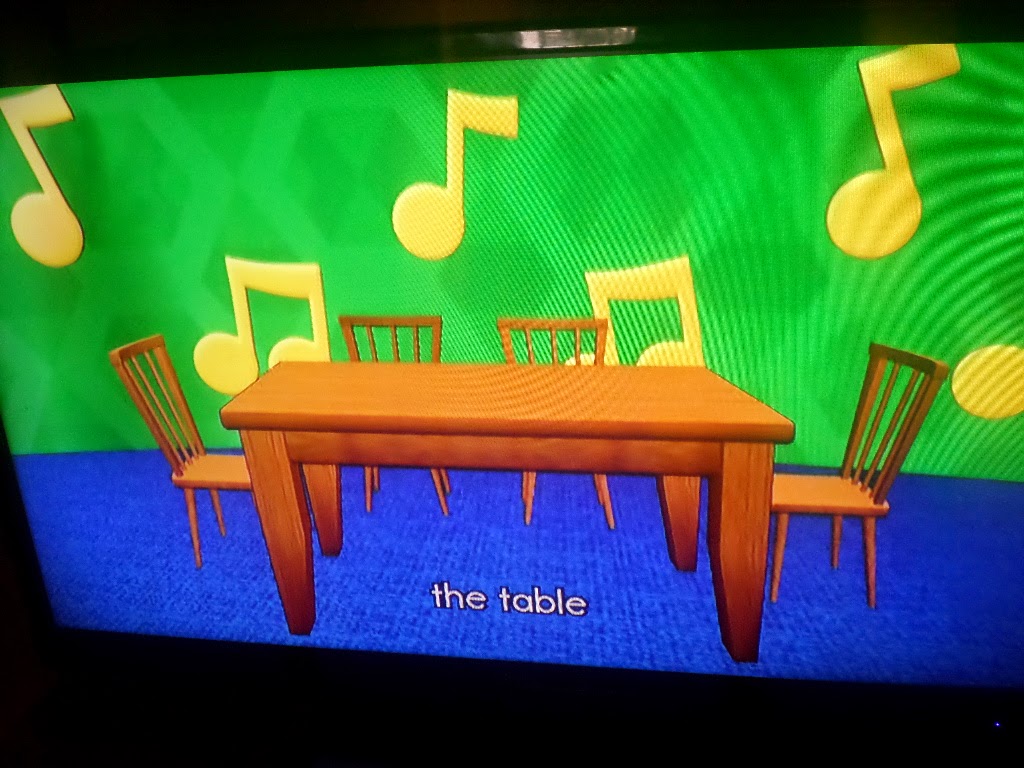 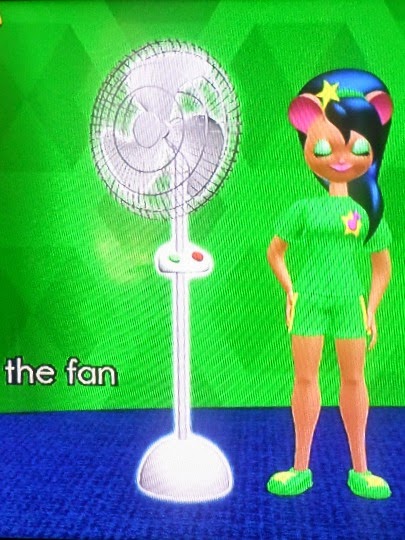 Not only are we taught words, but phrases as well. For instance once we learn the word for stairs, "las escaleras" we are then shown the phrase go up the stairs, "Sube las escaleras" while Festus climbs the stairs. When we are taught the word for lamp, "la lampara" we are taught how to say turn on the lamp, "Encienda la lampara." and turn off the lamp, "Apague la lampara." There are over 80 words and phrases taught per language, including furniture and other household items , clothes, toys, numbers, and colors.


We are taught to count by counting Rock 'N Learn Kids, balloons and other objects.

We learned the colors by seeing them on the big tv screen in their house and then the cans of paint they are holding. They started with primary colors and then added in the secondary colors and showed how to mix the colors. Black, white, gray, pink and brown are also included. We then look at different things that can be each color, which leads into a review of different words by adding colors to them, such as a hunt for Festus's missing shoe. 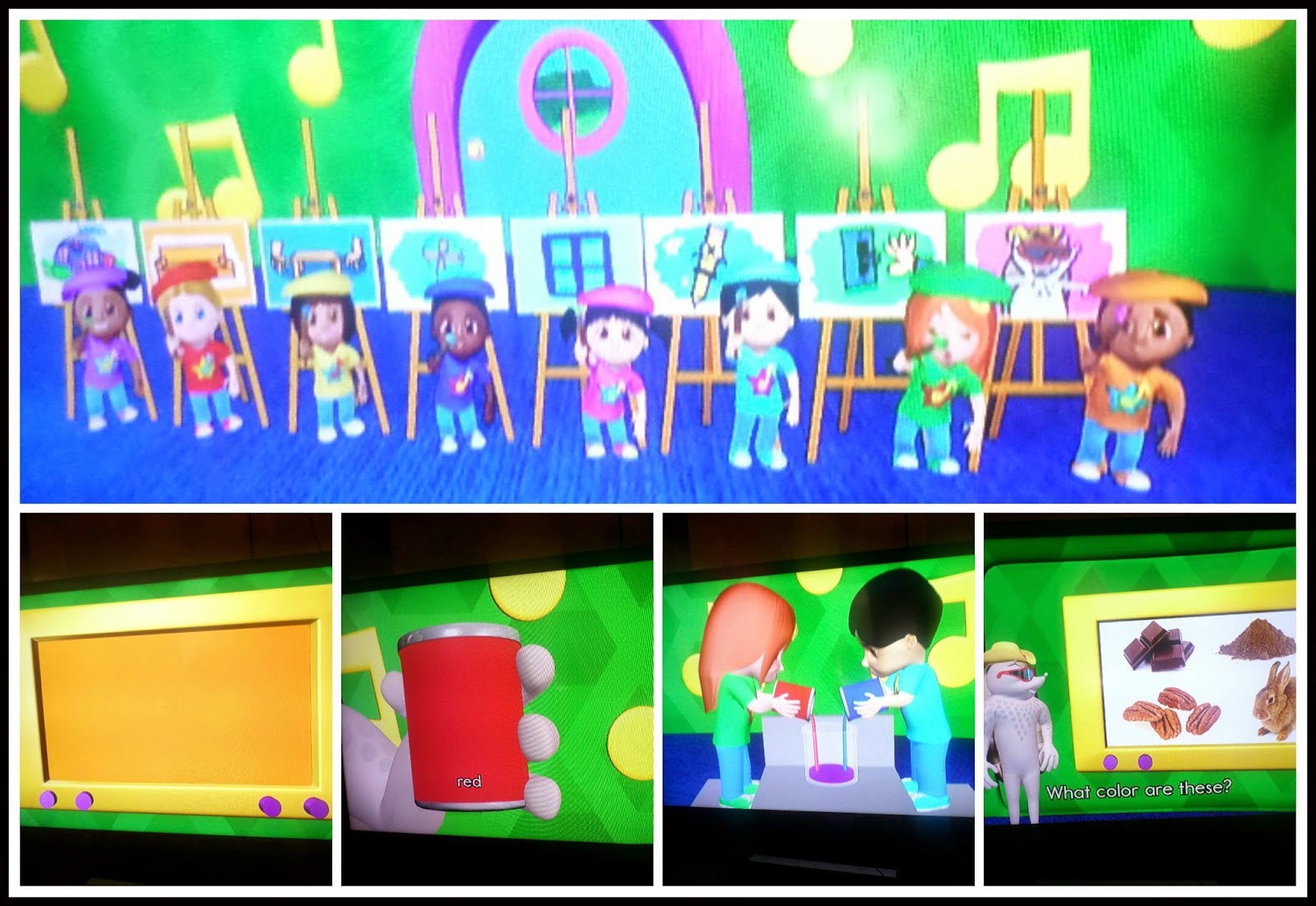 Speaking of Festus, he gets himself into some interesting predicaments and is the fun, goofy character we remember (though he doesn't have any dialogue so we don't hear him saying "sorry" like we do in the other DVD's ). 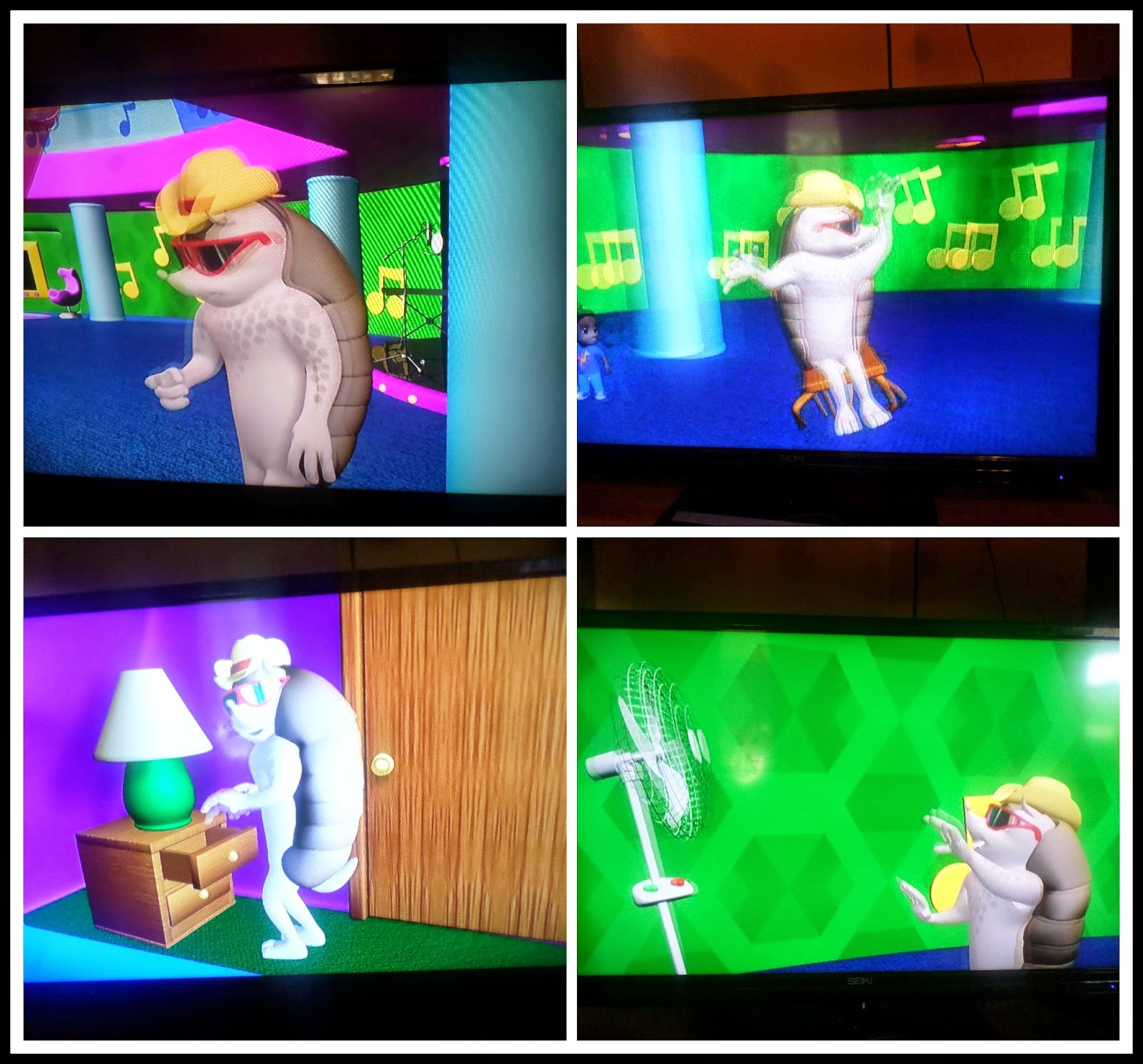 Not only did we use this to learn Spanish, but when we were focused on the book Madeline we used it so the children could be introduced to French. We also sampled the other languages, just so the children could see how different languages are. The show for each language is exactly the same, except for the fact that the words are said in the chosen language.  I was curious how Rock 'N Learn had done the Chinese language on the disc. They have shared the Chinese characters along with the pronunciation. 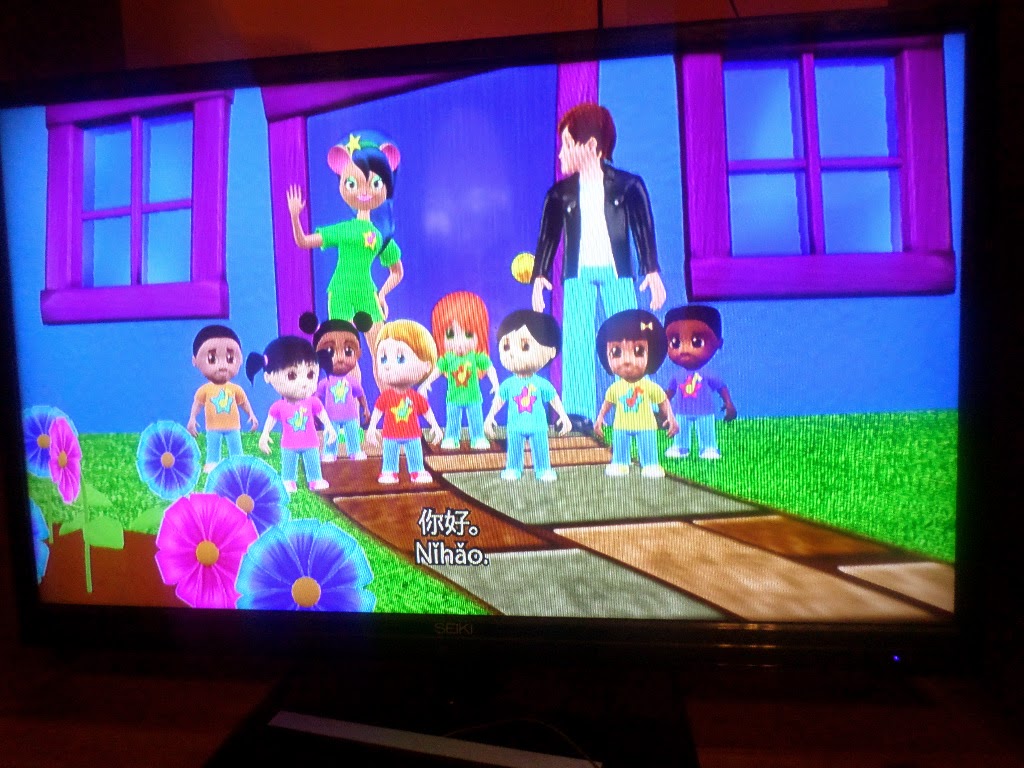 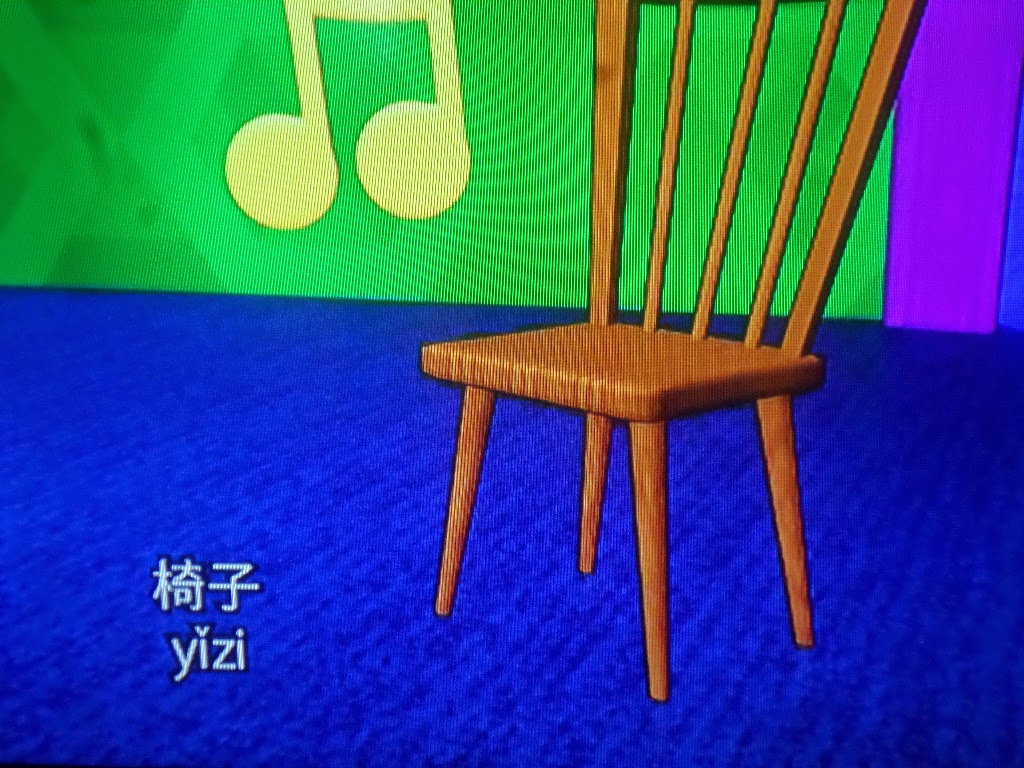 The other way that "Learn a Language" can be used is to choose a scene in order to review specific categories. Below are the scenes that you may choose from.

We really have enjoyed watching and learning the basics of Spanish, along with a quick introduction to 4 other foreign languages. I love that English is included. While this can be used by children of other nationalities to learn English, it can also be used for young English-speaking children to learn common words, counting and colors, along with helping older children to learn the words by including the subtitles.  Harold, who is 2 1/2 is improving his English vocabulary in addition to learning Spanish right alongside his sisters. He is counting with the characters on the screen and saying other words. Similarly, a child who is native to any of the listed languages could use this disc to learn any of the basics of any of the other languages.

I was a bit surprised that the only music that was on the disc was background music, transitional music, or a scene where Brad, Susan, and Festus are playing instruments while the Rock 'N Learn kids are painting. I understand the reasoning behind this, that the creators wanted to make sure the pronunciations of the words could be heard clearly to be learned properly. I am just remembering back to teaching the children French and Spanish at the Montessori. Yes, the learning was spoken, but we did teach them songs as well. Here at home we have sung the days of the week in Spanish and then also speak them while doing calendar. I would have loved to see some of the review time include some songs.

As much as I would have loved to have some more songs on this Rock 'N Learn DVD, I have found that it has been a wonderful tool for the children to learn another language. I'll watch the children as they view the DVD and they will be pointing out something from our house as it is mentioned on the screen, and they are using the Spanish word while they do so. I am really hoping the company is planning on coming out with a Learn a Language 2. Yes, they have a Spanish DVD for older children, but I would love to see another DVD with this same format with some different vocabulary, such as family members and animals, along with teaching the children to ask some different questions, such as "where is?"

There are almost 4 hours of language learning fun included on "Learn a Language", each language being about 38 minutes long, just the right length to be watched through in one sitting.


You can check out all the products they offer at the website.
"Learn a Language" sells for $19.99.
Rock 'N Learn has generously offered my readers 25% off by using this coupon code: KR8822

One of these great Rock 'N Learn DVD's can be yours!
Rock 'N Learn has generously offered to include "Learn a Language" or a DVD of your choice in my Back to School/5 Year Blogiversary Celebration. 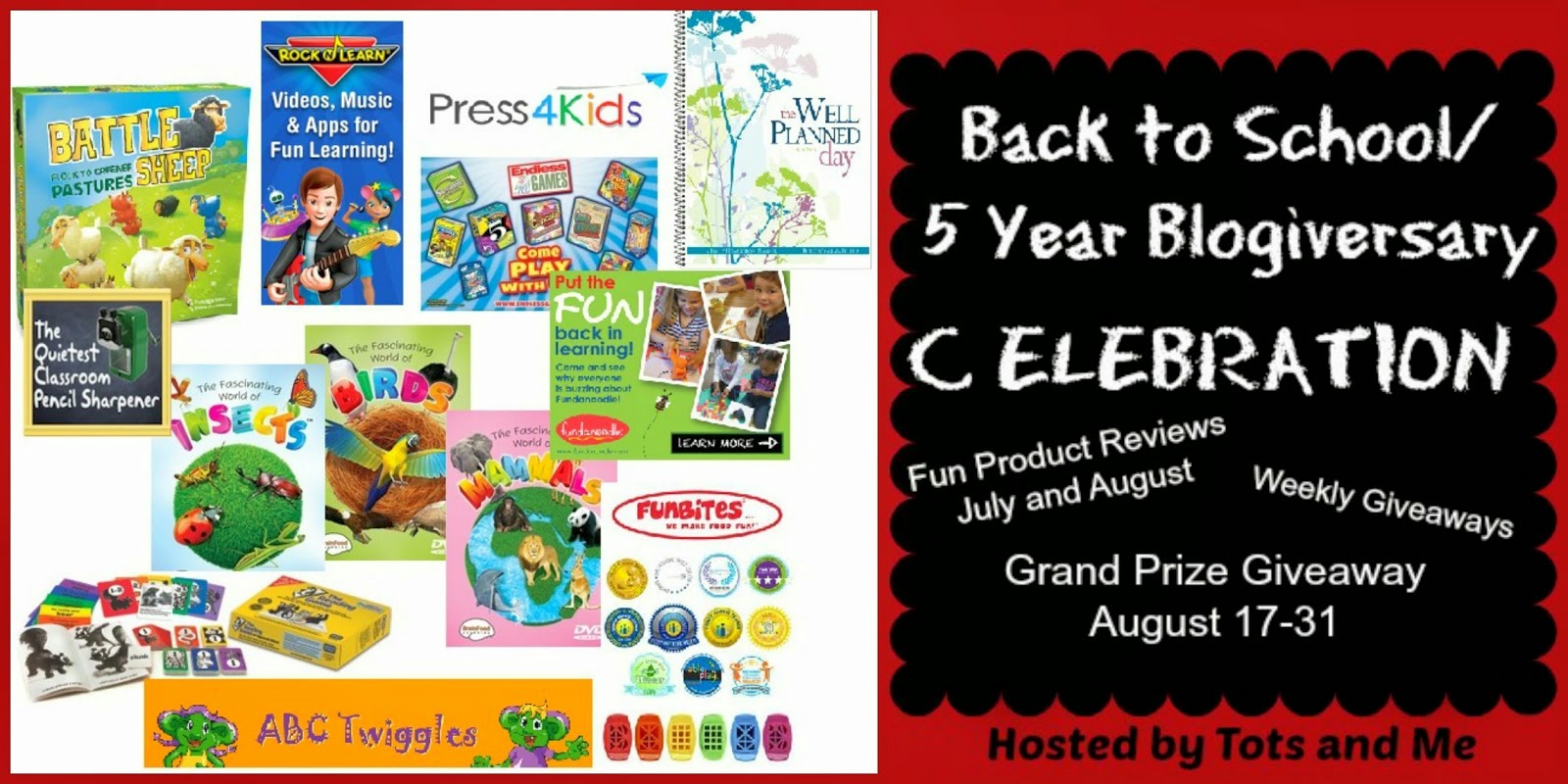 How would you like some extra entries into this giveaway before it even starts?
Head on over to Rock 'N Learn website and tell me what other product catches your eye Leave the answer here in the comments with your email and when the giveaway is live I will email you the secret code to place in the Rafflecopter for a bonus 10 points.

Don't miss out on the Grand Prize Giveaway!
Click here to enter the giveaway.
Posted by kewkew at 8:25 AM