Enhancing Our Homeschool with Educational and Entertaining Books from Carole P. Roman {A TOS Review}

Do you have a favorite author in your house? Or maybe favorite authors? It seems once we find books we enjoy by a specific author it is always a treat to get our hands on more books by the same author. I'm sure we aren't alone in this feeling. Well, I was thrilled when we were offered the opportunity to review some books from one of our favorite authors. In fact, this is the third time we have had such an opportunity. Thanks to the Homeschool Review Crew we received three children's books by award-winning author Carole P. Roman. She has some wonderful series to help you and your children explore different cultures or historical time periods, along with fun picture books and early chapter books which delve into different fun topics. 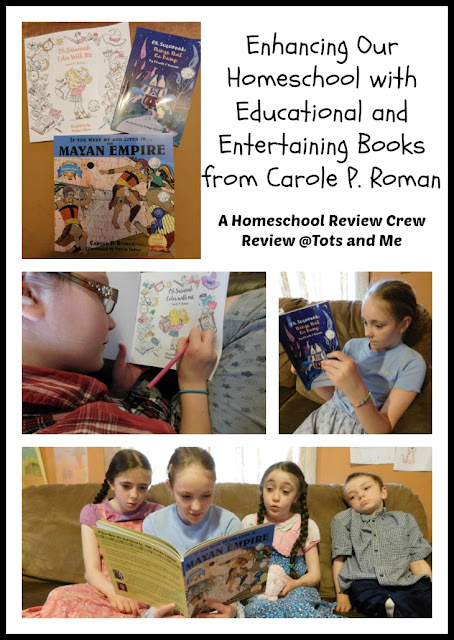 This time around we had the privilege of receiving one of Ms. Roman's "If You Were Me and Lived in. . ." historical series books, one from the early chapter book series, "Oh Susannah," and Ms. Roman's first coloring book that goes along with these "Oh Susannah" books. 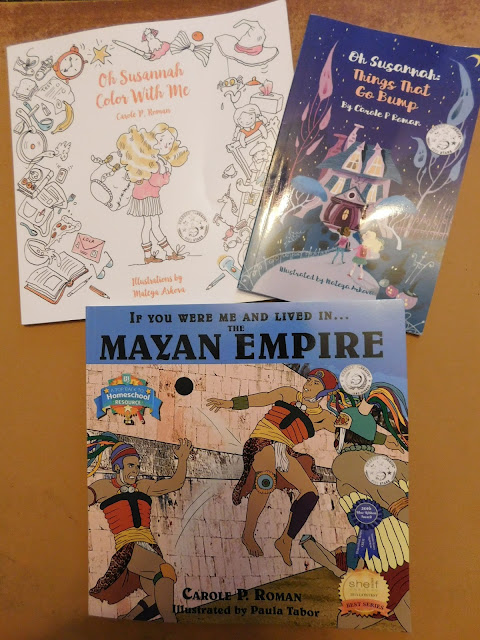 We have enjoyed our time with each of these books. Tabitha enjoyed reading Oh Susannah: Things That Go Bump and coloring in the Oh Susannah: Color With Me book. Once Amelia reads the book I plan on purchasing her the coloring book as well. She just isn't quite into reading as much as her sister is. And we read If You Were Me and Lived in . . . The Mayan Empire as a family read-aloud during our school time.

Let's take a look at each of these books. 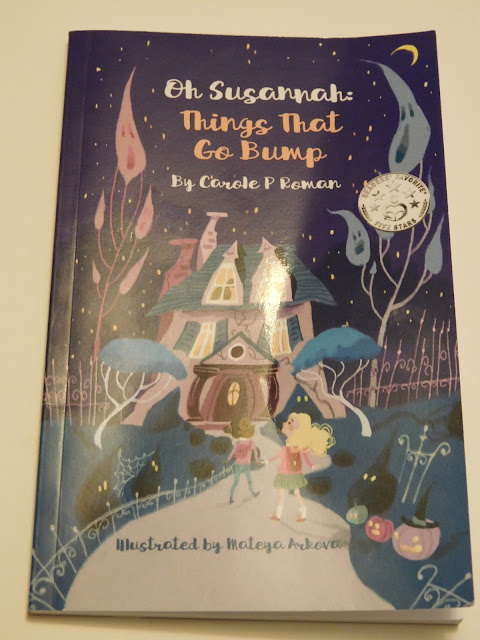 Oh Susannah: Thing That Go Bump is the sequel to Oh Susannah: It's in the Bag. We reviewed the first book back in September of 2017 and were thrilled to receive the second book. The story takes place immediately after the events of the first book. In fact, the main dilemma in this book was mentioned as one of Susannah's issues in the first book. You see, almost eight year old Susannah Maya Logan, had been stuffing all of her problems in her backpack, causing the weight to grow and grow until it was too much for her backpack to bear. With the help of her parents, she was finally able to deal with them. However, she was still anxious about the sleepover invitation she had received from her friend Lola. The first book ended with her mom noticing the invitation under Susannah's bed and asking what it was. The final line states, "'That,' [Susannah] explained to her mother with a sleepy yawn, 'is another story.'"

The sequel is slightly longer than the first book, having 44 pages and ten chapters, where the first book had 34 pages and nine chapters. Like the first book, most of the chapters are short, between two and five pages in length, though one does have nine pages. In this story Susannah is learning about dealing with fears. Though she knows she can come to her parents with help for her problems, she isn't sure if a fear would be the same as coming to her parents for help with her homework. The reason she is afraid of going to her friend's house for the sleepover is Lola lives in an old house, a house that Susannah thinks is haunted. It doesn't help that Lola's brother Kai encourages this belief and keeps trying to scare her.

Throughout the book we see that Susannah has some different fears she needs to deal with.  An encounter with another little girl who she assists at a charity event helps Susannah to realize these fears come from misunderstanding and the unknown. She gains the courage to go to Lola's and is treated to a wonderful surprise at the end of the book.

Tabitha's book report shares a bit more about the story: 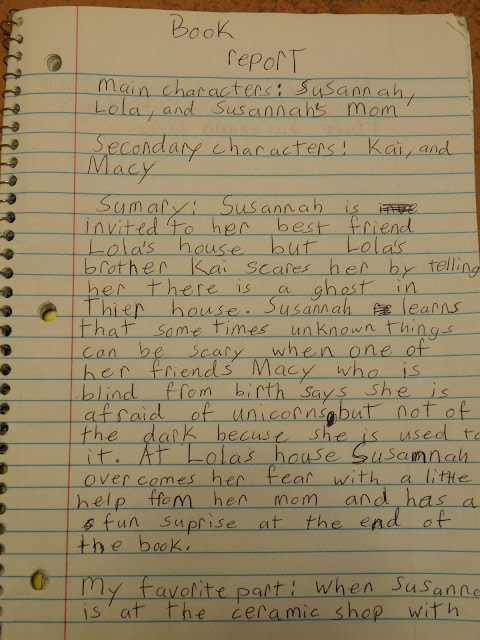 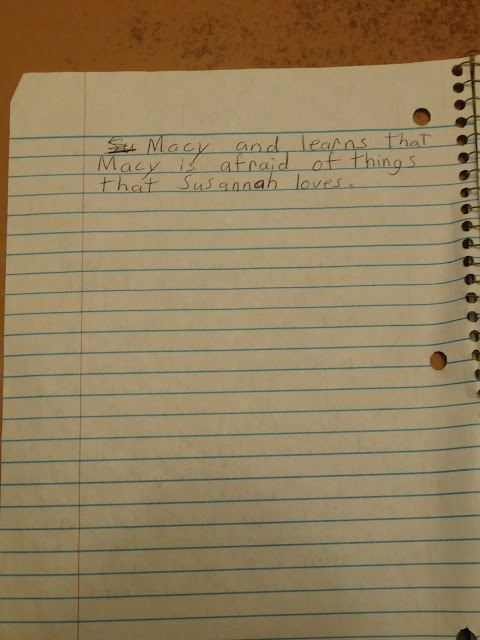 Oh Susannah: Things That Go Bump is a great sequel. We loved seeing Susannah dealing with her fears and learning to overcome them. I think it will encourage children to realize that everyone has different fears, and they can learn to be sympathetic to the fears of others without belittling them.

I did want to mention that both Halloween and Harry Potter are mentioned in this book. However, Halloween isn't being celebrated. The story takes place in October and in one scene the clown is giving out orange and black balloons. Later in the book Susannah is frightened by what ends up being Lola's mom carrying a pumpkin into the house. It is mentioned that they won't be able to carve the pumpkin because it fell and broke. Personally, I would have preferred if Halloween hadn't been mentioned at all, but I was glad that it wasn't the focus of the book. As for the Harry Potter reference, Susannah's class was reading the first book and the children  were discussing whether or not witches, wizards, or ghosts were real. However, their assignment was just to compare a school day at Hogwarts with one of their school days. Personally, we love Harry Potter, and I have no issues with it; but I do realize there are some who do not allow Harry Potter, so I did want to mention the reference so others would be aware. The inclusion of the reference in the story appears to be a way to reinforce the thought that even though some of these scary things may appear to be real, it doesn't mean they are.

Oh Susannah: Color With Me 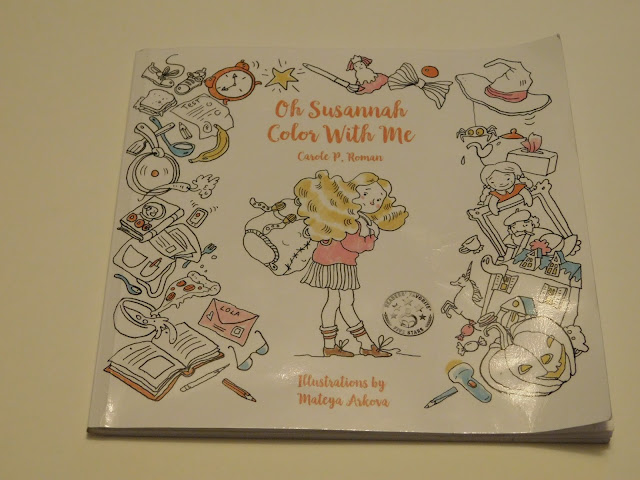 Oh Susannah: Color With Me is a 48 page, softcover coloring book that helps bring the stories in the "Oh Susannah" series to life. These detailed illustrations are by Mateya Arkova, the same illustrator who illustrated the chapter title pictures in the books, along with some of Ms. Roman's other books. 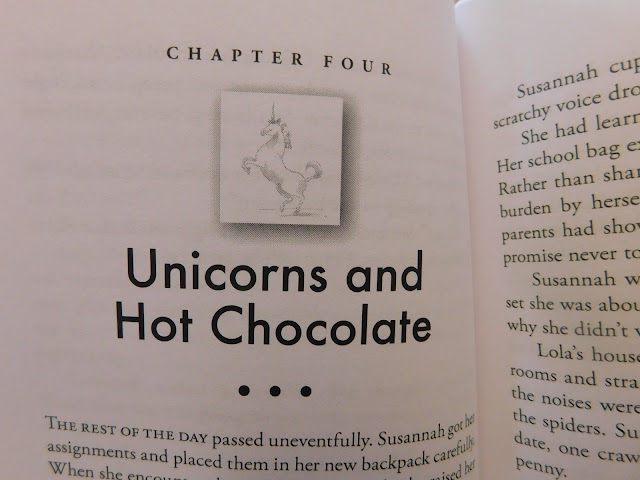 As Tabitha is the only child in the family who has read both books, I allowed her to use the coloring book. At one point I thought of letting Amelia share it, after she finished reading. However, I realized a coloring book can actually become a personal belonging to the one who is coloring in it, using their own style, so I decided it would be better to purchase Amelia her own book . . . once she finishes the story of course.

Tabitha has been quite meticulous in her coloring, taking her time to ensure it is how she wants it to look. She started by coloring the title page, and has been working her way through the book. It had been a while since she read the first book, so I think this was a great way for her to relive the book. 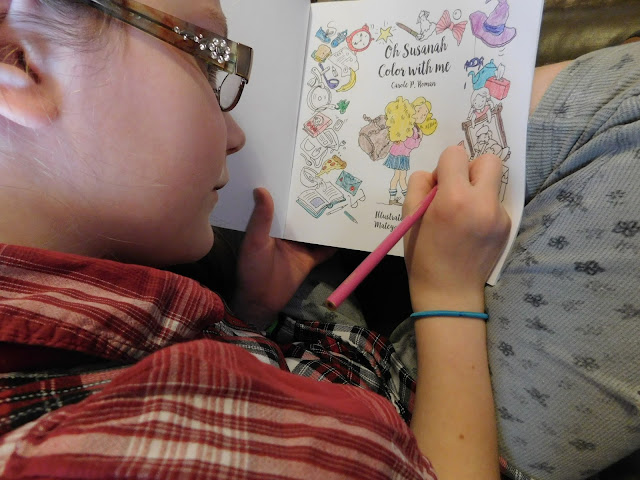 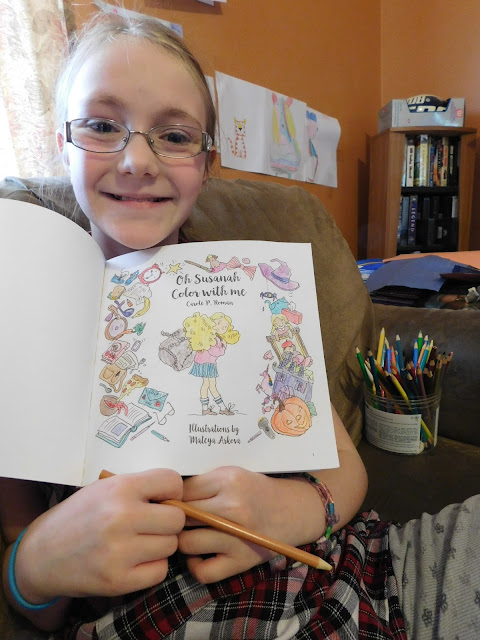 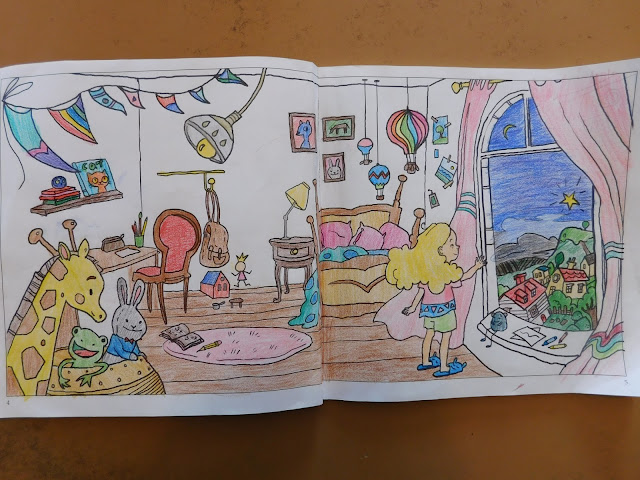 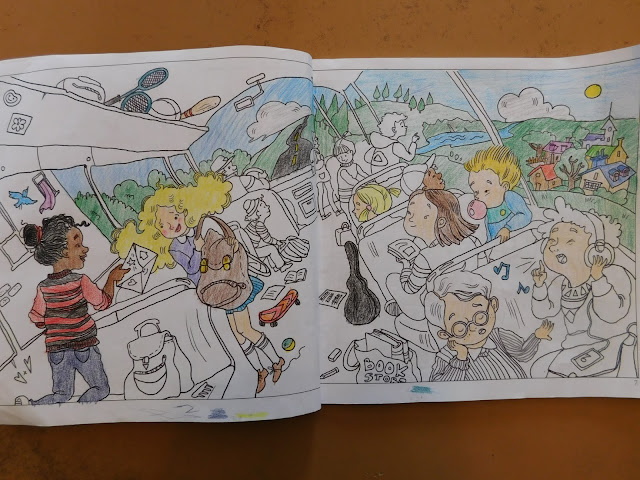 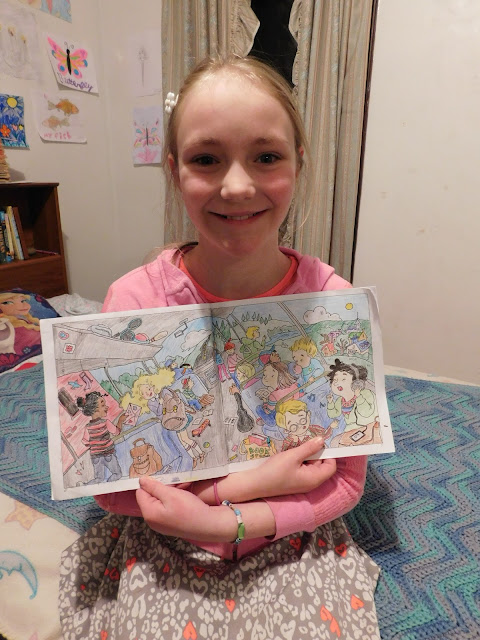 I think the coloring book really helps to enhance a child's time with these "Oh Susannah" books, especially because there aren't that many illustrations in the chapter books themselves. We are thankful to have all three books in this series so far, and are really hoping there will be more tales about Susannah Maya Logan. 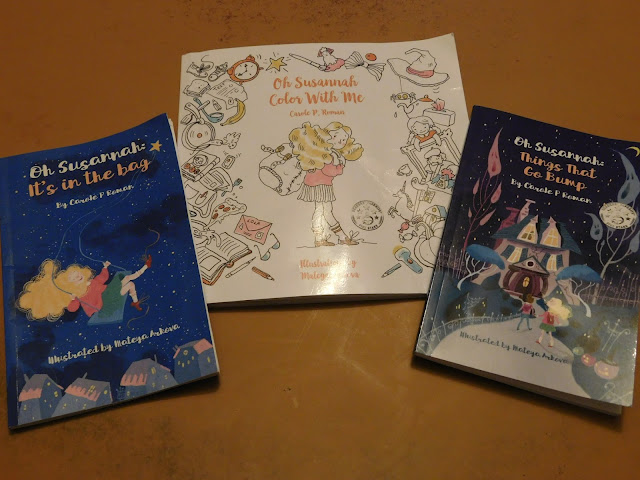 If You Were Me and Lived in . . . The Mayan Empire 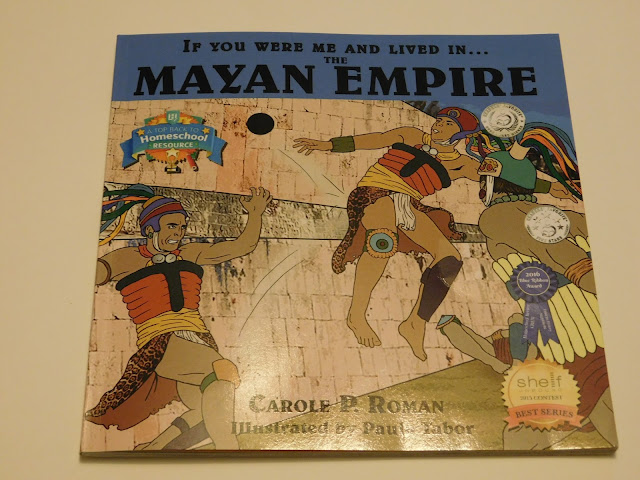 I asked to review this particular title because we have been learning about ancient cultures with our core curriculum, and we had just learned about various cultures that developed in the early Americas, when people had begun to spread from Asia into North America and down to South America. We hadn't actually learned about the Mayan Empire yet, but I thought it would be neat to learn about a civilization that could be traced back to 1800 BC in Central America.

As with the other books in this series, the book begins with a comparison of what the Yucatan Peninsula looks like today and what a Mayan town might have looked like centuries ago. The book actually focuses on the culture 1500 years ago, around the year AD 572, during the Classic Age, or Golden Age of Mayan life. 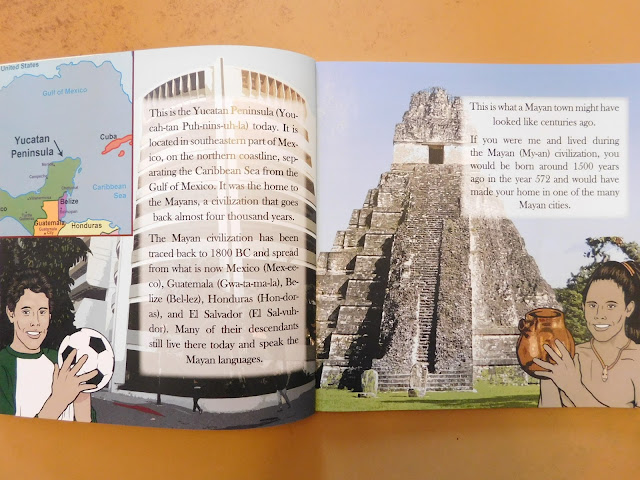 We love that these books help to take the reader back to these specific times and cultures, making them feel as if they are a part of the story. In this story the reader is a young boy who was born into a family of potters.

We learned that the Mayans had recorded their history in such things as stelas, pottery, and skins. 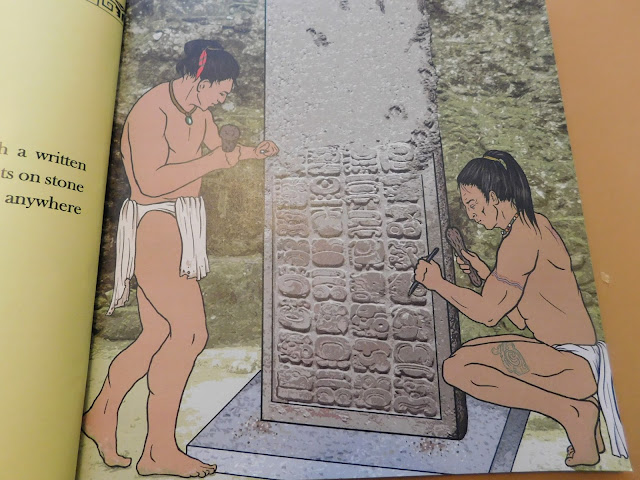 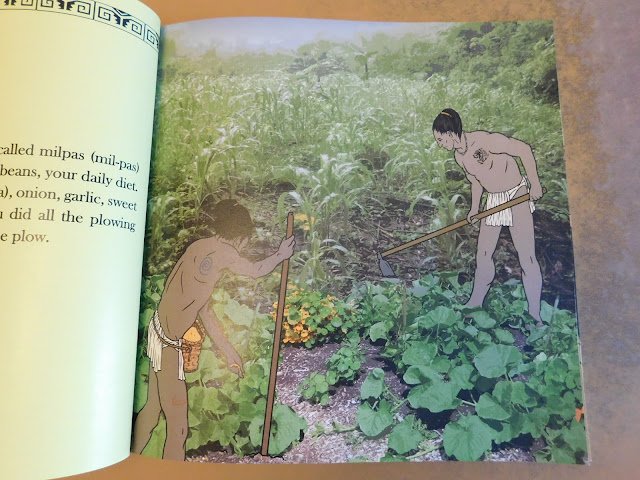 We also learned about the food that was eaten, the clothes that were worn, and how the Mayans adorned both their clothes and their bodies. Hannah's favorite part was learning that they crushed cochineal insects to be able to paint their cheeks with the red color. 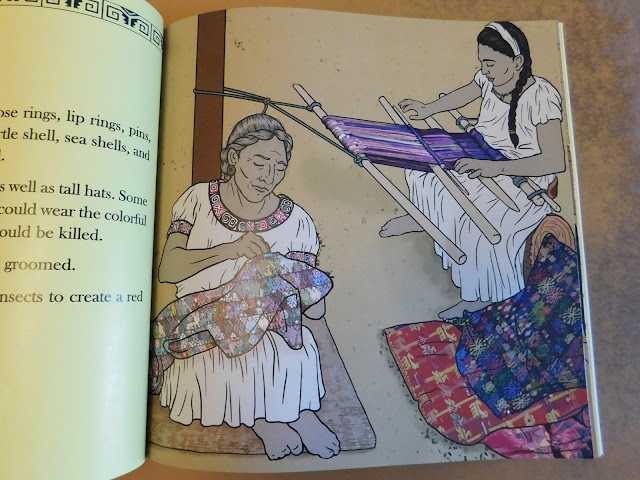 The Mayans had several different ways in which they altered their natural appearance, so they would look the way they felt was desirable. We were all quite intrigued and maybe a bit disturbed to learn that the Mayans reshaped the heads of newborn babies between two boards so they would have an elongated head in order to honor the maize god Yum Kaax. This was actually Tabitha's favorite page. 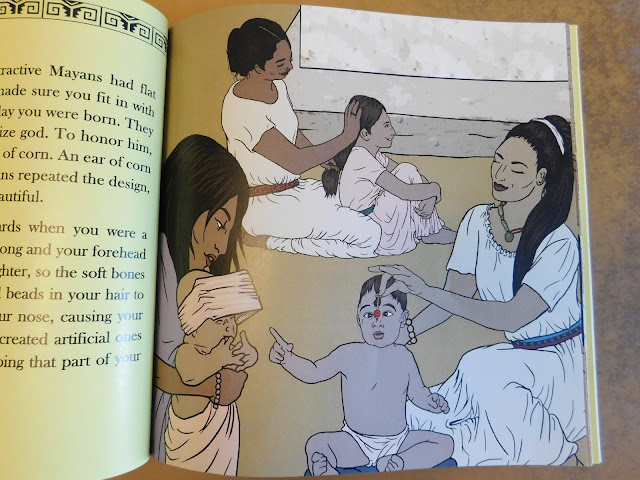 Even though life involved hard labor, there were also festivals, and feasts, and games. Amelia's favorite part was learning about the fast-paced ball game called Pok-ta-Tok. 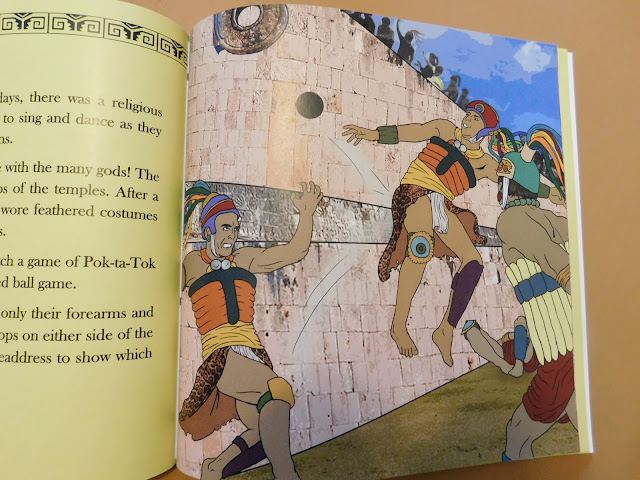 The book concludes with a section on Mayan Contributions to the World, a section devoted to Famous Names in Mayan Culture, and a five page glossary.

As with the historical series books we have previously read, this book is chock-full of information. It really helped us to learn about the Mayan Empire. I love that a lot of the illustrations were similar in style to the ones I enjoyed from If You Were Me and Lived in . . . The American West. We really enjoyed the realistic looking backgrounds with the bright figures that remind me of stickers being put on the page.

If you are looking for books to enhance your homeschool, I would highly recommend these books from Carole P. Roman. We are always on the lookout for books that will entertain as well as educate. Additionally, it is wonderful to be able to find fiction books that promote good morals and positive character role models. These benefits are definitely found in these, and other, books we have read by Carole P. Roman.

You can also read my previous reviews of the Carole P. Roman books and collections to see what we thought of some of Ms. Roman's other books.

Don't forget to click on the banner below to read what my fellow Crew Mates had to say about the Carole P. Roman books they chose to review.