Picture Book Saturday is where I share the picture books we have been reading as a family, focusing specifically on the books we are using for homeschooling, though sometimes I may add in some of the other fun books, especially if there is one that we really enjoyed. The chapter books the older girls and I are enjoying are shared about in my Fun Fiction Friday posts.

This past week I shared my Scarecrow Fun Round Up. We have been reading some really cute books, and I wanted to share them with you. 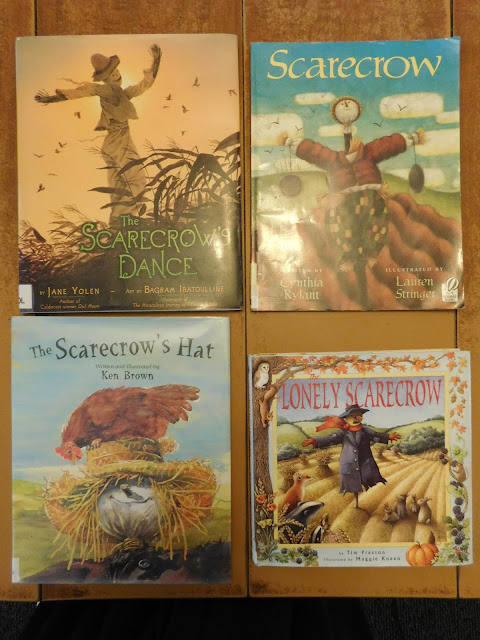 The Scarecrow's Dance by Jane Yolen is about a scarecrow who gets blown away on a magical wind. He dances and skips around until he finds himself outside the window of a young boy who is praying. The scarecrow hears how important his job is, and he goes back to his field.

Scarecrow by Cynthia Rylant tells of what a scarecrow is and what he might be feeling and seeing.

The Scarecrow's Hat by Ken Brown is about a hen who loves a scarecrow's hat and would love it for herself. The scarecrow would be willing to part with it for a specific item, which she doesn't have, but knows where to find. Thus begins her adventure from one animal to another, discovering what they would trade for the item the next animal had. We find out what the hen has to give the final animal, in order to give it to the previous animal, and so on until the item the scarecrow wanted is able to be retrieved, getting her the hat.

The Lonely Scarecrow by Tim Preston tells the tale of a scary looking scarecrow who is lonely because everyone is afraid of him, until winter comes and he is covered with snow, and looks like a friendly snowman. 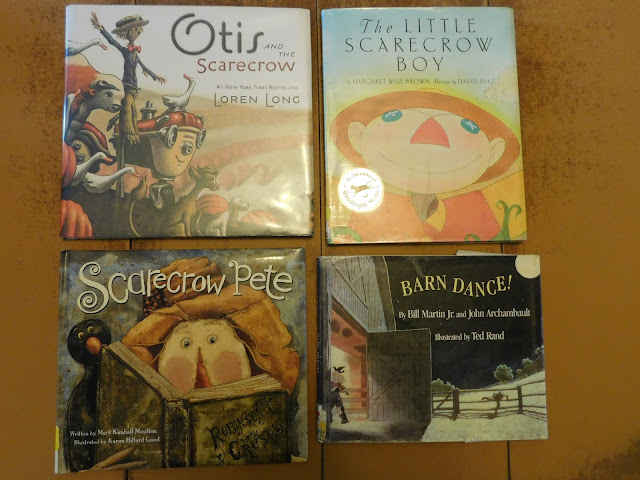 Otis and the Scarecrow by Loren Long is about a little tractor named Otis and his farm friends. They all like to play together and can't understand why the scarecrow just continually frowns and ignores them.

The Little Scarecrow Boy by Margaret Wise Brown is about a family of scarecrows, the father, mother and little boy. The father goes into the fields to make faces and scare the crows, and the little scarecrow wants so bad to be able to do what his father does. But he keeps being told he is not ready and is too young. One day he decides to sneak out and try to scare the crows on his own.

Scarecrow Pete by Mark Kimball Moulton is about a boy and a scarecrow named Pete who is stuck in the field on a pole. Pete introduces himself to the boy one day and starts talking about the friends he has made from the books he reads. The boy isn't too impressed, until they start reading together in the garden and become good friends.

Barn Dance by Bill Martin Jr. and John Archambault is about a skinny kid who is drawn to the barn by music being played by a scarecrow. The animals and the scarecrow are having a hoe-down and invite the child to join in, which he does until the break of day. 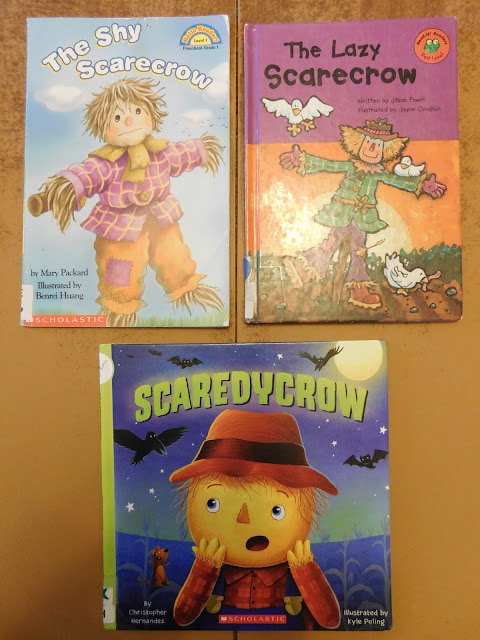 The Shy Scarecrow by Mary Packard is an easy reader book. Rags is a scared and shy scarecrow who can't do his job scaring the crows. That is, until the farmer realizes there is something he forgot that belongs to the scarecrow that will help him.

The Lazy Scarecrow by Jillian Powell is also an easy reader. This scarecrow is so lazy, he doesn't care about keeping the birds away from the seeds. But because they eat all the seeds, nothing grows and the field is dusty and barren. Then the farmer sees the scarecrow waving himself all around, so he decides to take him to another field to work.

Scaredycrow by Christopher Hernandez is about a scarecrow who is so scared of everything he ends up scary them away unwittingly. Unfortunately that just makes him lonely, until a little mouse who is new to the farm decides to make friends with him.

In my Picture Book Saturday posts, there will also be a section where I share the children's favorite books from the past week(s).

I invite you to stop by and check out the fun Paper Plate Scarecrows we made, plus all the fun crafts and activities shared in the round up. 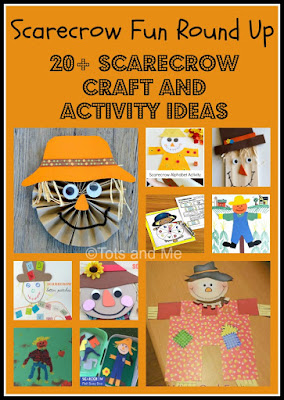 Thanks for stopping by. I hope you can come back for a visit again soon.