I've mentioned before that I love finding new books for the children and I to read. I've also mentioned that Amelia is a fan of learning about history. So, when I learned about Mattie Richardson's Horses in History Series from Author Mattie Richardson/Appaloosy Books, I thought they would be a great read. What made it really good timing is that we are learning about early American history in our homeschool this year. Granted, we are learning about colonial times currently, and these books take place in the 1800's, but I thought they would be fun to read and have on hand for when we reach that period of history. 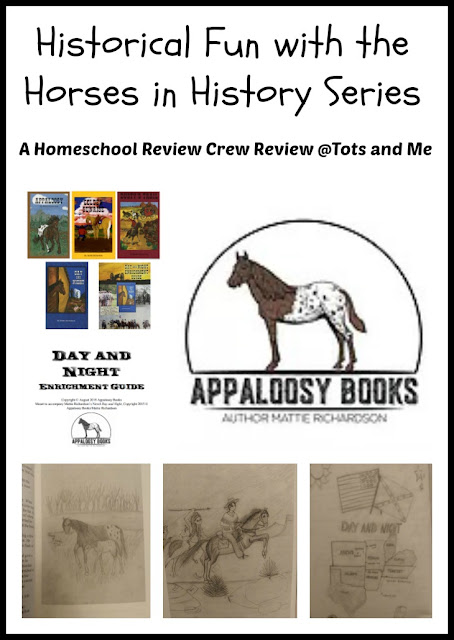 We received four paperback books which range in length from 70 pages to 140 pages. 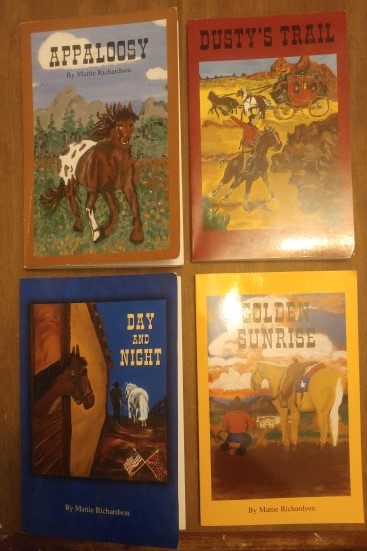 The author, Mattie Richardson, wrote the first book, Appaloosy, when she was only 13 years old, though it wasn't published until she was 16. Since then she has written five more books. I love her passion for writing and for encouraging other young writers. She is also a musician and of course, she owns a couple of horses and enjoys horseback riding. Even more amazing, she finds time to go and speak and perform Bluegrass. Her four books in the Horses in History Series are:


What really intrigued me about these books is that they are written from the point of view of the horse or horses (as is the case in Day and Night). And though the stories revolve around the personal life of the horse(s) and the owners, there are tidbits of history being learned as the books are being read.

You do not need to read the books in any particular order, and they are not connected with each other. They are stand-alone novels which focus on different periods in American history. 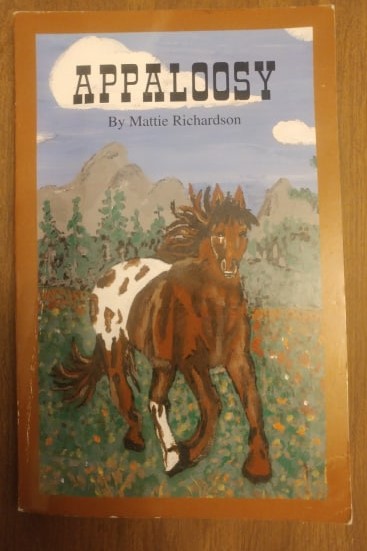 In Appaloosy, we are introduced to the main character, Storm the Appaloosa, at his birth. He is the son of Blackhawk and Misty. This story takes place in 1877 during the Nez Perce War. At first Storm thinks he is a free horse, but soon learns that the Nez Perce Indians owned him and many other horses in the area. His life is a series of struggles in wanting to be free while being owned by different people, some more loving than the others. Even though he resisted being "owned" by the Indians, he developed a relationship with the young brave named White Feather who he was given to. Sadly, they are separated due to the Nez Perce war when the white man comes to force the native people onto the reservation. He finds himself taken away by the soldiers, refuses to be broken, and ends up escaping, only to be caught and sold more than once. He then goes from his cruelest master to his sweetest, most gentle owner, a girl named Faith who earns his trust and loyalty. There are still struggles, including a fire, an accident, and a horse-napping, but he finally comes to the realization that he wants a home and chooses to remain loyal to Faith. 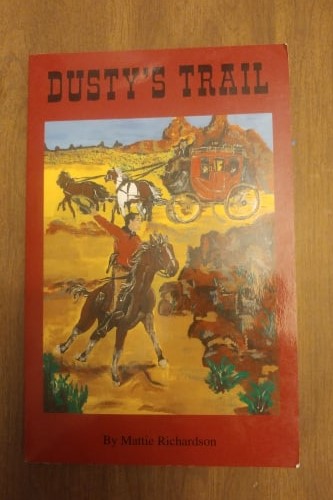 In Dusty's Trail, we go back a decade to the time of the Pony Express which ran from April of 1860 to October of 1861. Our main character Dusty is unlike Storm from the first book in that he was brought up to know he was an owned horse. He is an American Quarter Horse was already broken and enjoyed spending time with his owner. We are introduced to him, as well as his owner Levi, as they are racing down a dusty Nevada valley. We come to learn that Dusty is extremely fast, yet he is a bit of a fraidy cat. And we learn that Levi is a bit rebellious, though he means to do well by his family. Against his mother's wishes, Levi answers an advertisement to become a part of the Pony Express. We learn how the Pony Express ran, with the rider going from horse to horse before taking a break. This of course means that Dusty wasn't always with Levi. Though Dusty worked well with other riders, it was said that they did their best work together. In fact, Dusty ran an extremely long run at one point because of sickness and death of others. This of course puffed Dusty up with pride, which was then punctured when he and Levi were attacked by Pauite Indians and he abandoned his master who was captured. Thanks to the help of a horse named Ace who used to be owned by some Indians, Dusty is able to rescue Levi, becoming brave in the process. 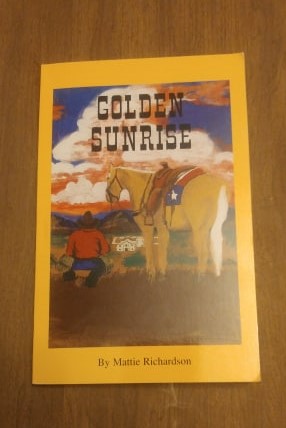 In Golden Sunrise, the author takes us back further in time to the early 1800's during the time when Texas is fighting for its independence. In this book the main character is a female Palomino horse  named Cheyenne. We meet her and her owner Jared as they are playing in a meadow in Northern Texas. Cheyenne originally belonged to an Indian but was sold to Jared a few years prior to the start of the book. I look forward to reading this book and to learn more about the Texas fight for independence through the eyes of Cheyenne. I have to say, I was excited to learn that Davy Crockett is a character in this book. When it comes to historical information that I have knowledge of, this book is one that includes some I actually already know about.

But, I have to say, I know the most about the history that is covered in the fourth book, Day and Night. 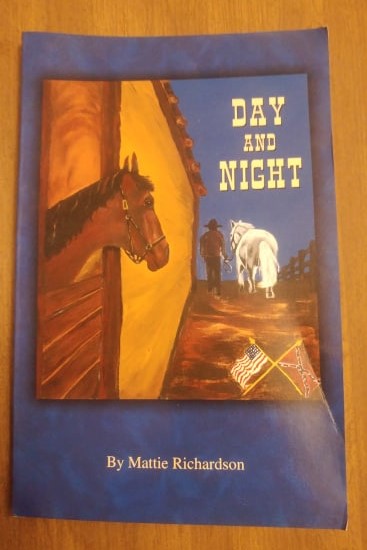 That said, I have not yet had a chance to read this book. Personally, I have fully read Appaloosy and Dusty's Trail. Tabitha and Amelia are part-way through Appaloosy, though with their other reading for school they haven't had a chance to read it as much as I would have liked. Unfortunately, Amelia isn't as "into" the book as I was hoping she would be. I, on the other hand, am really enjoying them and can't understand why she doesn't care for the book. Though I have not yet read Day and Night, my husband agreed to read it to be able to share his thoughts.

This is the only book that is told from the alternating point of view of two horses who happen to be brothers, one fighting with the Union army, and one fighting with the Confederate army. Personally, I am used to books like this, so I think I would be okay with it; however, my husband has found it a bit confusing. Other than that, he seems to be enjoying the book.

I think this book is one the children and I will read together as a read aloud when we get to the time of the Civil War (the time period it is set in). I'm especially excited to get to use the Day and Night Enrichment Guide for this Day and Night book. 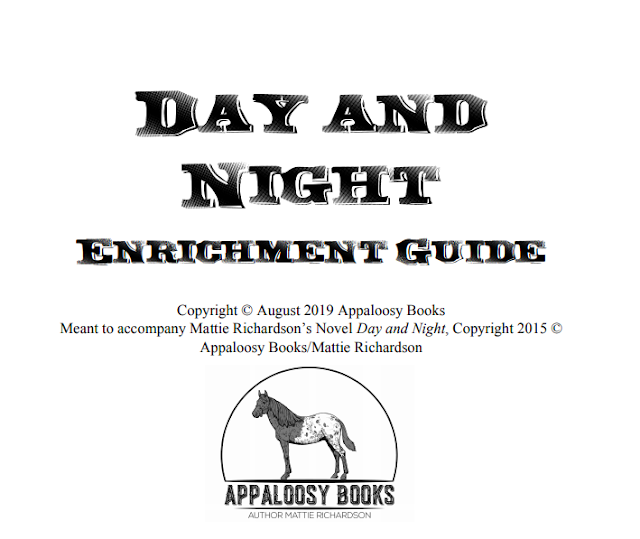 The Enrichment Guide is broken up into 8 sections which are meant to be taken at a pace of about one section a week. There are reading comprehension questions, vocabulary, history information, a look at soldier's life, geography, horses and history, biography, and even a section to work on the students own writing skills. It looks like this will be a great way to delve into the Civil War.

I have really been enjoying these books. Personally, I have always loved horses, and it is neat to be able to read these stories from the horses point of view, learning more about horses and the care of horses at the same time. I really enjoy all the historical information that is included in the books, and appreciate the time the author took researching this information. Additionally, the "Blast from the Past" section at the end of each book is a great resource.

I also like that there are some illustrations in the book, though there are only a few in each book. 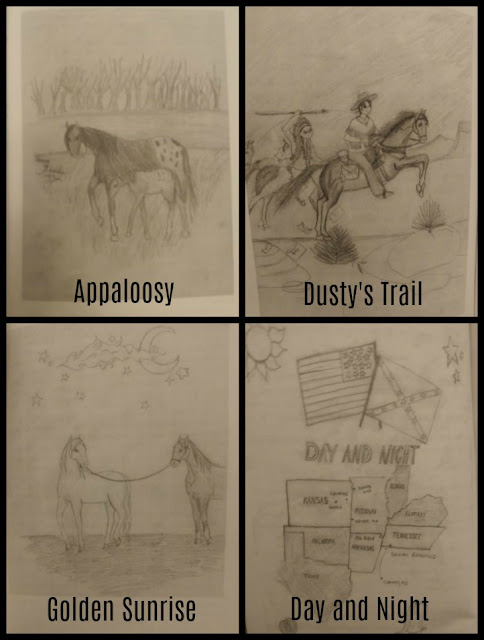 I definitely recommend these books to those who are lovers of horses and/or American history.

Don't forget to click on the banner below to see what my fellow Crew Mates thought about these fun books.