Challenge Your Faith with "Do You Believe?" From FishFlix.com {A TOS Review}

Earlier this year, I learned about a wonderful Christian online company called FishFlix.com thanks to the Schoolhouse Review Crew. This family owned company sells quality Christian and Family-Friendly movies at affordable prices. They carry DVDs in many different categories, including Apologetics and Creation, Christian Living, and Documentaries, all the way through End Times Prophecies, History, and Sports films. When the opportunity came up to review another film from FishFlix.com, we jumped at the chance. This time we were able to review the PureFlix Entertainment film titled, "Do You Believe?". 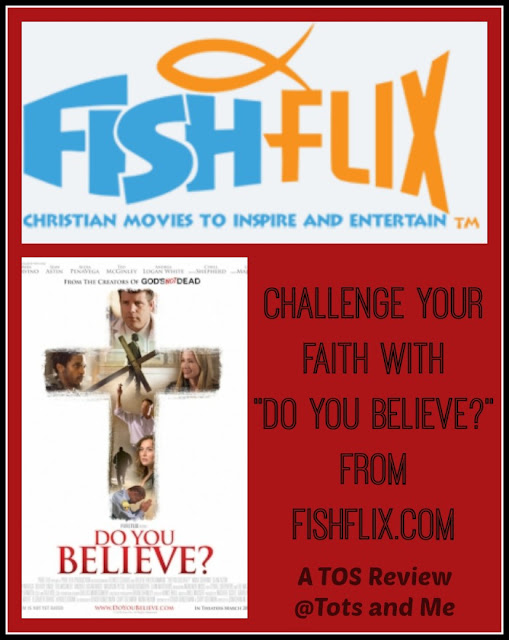 "Do You Believe?" is 119 minute film from the creators of "God's Not Dead." My husband and I were quite eager to be chosen for this review after watching the powerful trailer. The movie is about how twelve people's lives are interconnected, though they are unaware, at the time, just how closely interconnected they are. This all comes about because of a sermon that was given by a pastor after being approached by a man on the street who asked him, "Do you believe in the cross of Christ?"

At the beginning of the movie, it is hard to see how each of these individual's stories are going to interconnect. Throughout the story we flip between the different lives, not quite sure how they are actually going to intersect as their stories unfold. However, at the conclusion it is clear how they have impacted one another, some more intensely than others.

The movie begins by quoting James 2:17 which states, "Faith by itself, if it is not accompanied by action, is dead," We then hear a voice wondering how many of the millions of people in the city they are in actually find meaning in their lives. Our focus is drawn to a cross on a church and we are reminded that it offers forgiveness and redemption.  But then the following question is posed: What does it really mean? We are told this is a story of twelve souls who are about to find out, and that they intersect at the cross, and face the question, "Do you believe?"

We are slowly introduced to the main characters in the movie.  After realizing that the voice of the opening narrator belongs to the pastor , we are introduced to four more people when an ambulance brings a lady into the emergency room. They are the EMT worker, emergency room doctor, emergency room nurse, and patient. Then we move into the waiting room and 5 more characters are shown, a sick little girl with her mom, an older couple headed out of the hospital and a sick man named Joe who starts to befriend Lily while her mom is trying to get someone to attend to her. The little girl shares her pictures with the man, which of course concerns the mom when she returns, this is a stranger after all. We then discover that the old couple is meeting our pastor/narrator. On the way home the pastor notices another one of the main characters digging through a dumpster in an alley.

He then comes upon a man on the street carrying a cross with him. He is the one who starts this chain reaction in the movie. The street preacher asks, "Do you believe in the cross of Christ, son?"  His response is, "I'm a pastor." However, this doesn't impress the wandering street preacher. He wants the pastor to answer the question. He tells the pastor "The cross is blood stained, painful. It loves, forgives, and demands. What does it demand? That we profess it to this dark world. If you believe, then the question is, what are you going to do about it?" When he finishes this sentence, they are distracted by a noise over to the right of the pastor's car. Some hoodlums are in the process of stealing a van. The street preacher heads over there to admonish them and is threatened by the one with a gun. The preacher stands his ground, staring into the eyes of the guy holding the gun, telling them he is ready and then asking "Are you?" He tells them he is going to pray for them, all of the young men in the van, which impacts one of them much more than the others.

This encounter impacts our pastor immensely, causing him to stop to offer aid to the pregnant girl in the alley. As the pastor drives her to his house, we see another of the main characters standing on a bridge, gazing into the depths of the water while remembering battle sounds. Our last main character is the pastor's wife, who is none to happy that he brought the pregnant girl home.

As the story develops, we learn more about each of our characters, and get to see their paths crossing, though sometimes it is simply walking by without noticing each other. During a powerful sermon, Pastor Matthew challenges his parishioners to share the cross with a dark world, literally supplying them with a wooden cross the size of their hand. The love of Christ is shared, though sometimes the personal sacrifice is quite intense. Lives are changed. Joe, the sick man, and the older couple who had lost their daughter all have a huge impact on a homeless mother and daughter. The life of one of the hoodlums is drastically changed, impacting his brother. The EMT and the ER nurse struggle through what she sees as his stubbornness and fanaticism in his determination to stay true to Christ, while jeopardizing not only their marriage, but his career and livelihood.  Two suicidal people find not only each other, but hope in Christ. Grace, the pastor's wife, is moved to help the pregnant girl her husband brought home, with unforeseen consequences.

As these paths wind in, out, and around, we are brought to the heart wrenching, powerful climax where their paths come crashing together.

In the end, we see how the cross made itself present in their lives. "Do You Believe?" is a powerful and challenging movie. It focuses on 2 great truths. The first was shown at the beginning of the movie. Our faith in Christ needs to move us to action or it is a dead faith. Additionally, we are reminded that our lives impact others in ways we may not ever know. At the conclusion of the movie, we are reminded that God is in control of this tapestry of our lives and a huge masterpiece is being created. There is a God's eye view, where the whole picture can be seen one day. However, it is the back side of tapestry, which is an ugly jumble that we see during our life time. One day will see the other side; we will see the genius of God's handiwork.

As these truths are shared the film ends with these powerful songs by the Newsboys: "We Believe" and "Hallelujah For the Cross."

The DVD also includes some bonus materials. There are some great interviews with members of the cast.

This was a movie that I first watched by myself due to my husband's work schedule. I wasn't sure if this was something the children would be able to watch with us, so I needed to watch it after they had gone to sleep. Of course, this meant I was tired. However, toward the end of the movie I was so alert that I ended up not being able to get to sleep for at least an hour after the movie was finished. The last portion of the movie was so intense and powerful, I found myself sitting straight up so I wouldn't miss anything (I was watching in bed, so I had been laying down for the majority of the movie). I found myself in tears several times because it is so emotional, both positively and negatively.

I couldn't wait to share it with my husband. As I expected, he also enjoyed the movie. We both agree that it is not a movie for young children. It does have a PG-13 rating because of some violent scenes. There are several instances of people pointing guns at others, one of which actually erupts into the gun being fired more than once. There is a small fight and a couple of accident scenes, one a lot more intense than the other. Even though it is not a movie for young children, I highly recommend this film. The PG-13 rating comes mainly from the intense accident scene and some violence. There is no foul language, which is such a plus. I do enjoy action in movies, but in secular movies, even PG movies these days include foul language, while PG-13 movies are even worse. I am definitely going to have to look into more movies from FishFlix.com for our family entertainment.

Be prepared to have your faith challenged.

My fellow Crew Mates and I were able to choose between 5 different movies for this review. Besides Do You Believe?, the Crew has been watching the following movies:
Faith of Our Fathers, Little Boy, When Calls the Heart, Heart of the Family, and Living Waters: Intelligent Design in the Oceans of the Earth. Click on the banner below to see what my Crew Mates thought of these movies.