We had the great opportunity to review Christopher Columbus: Across the Ocean Sea by Janet & Geoff Benge. This book is one of many in the Heroes of History series by YWAM Publishing. Not only did we get to review the book, we were also given the Unit Study Curriculum Guide to facilitate our learning.

I had heard of these biographies before, but I had never had the chance to read one. However, I was unaware that they had study guides, so that was a neat discovery. This review came at a great time, as we had just started our study of American History, which begins with a look at the explorers who discovered America. I actually extended our study of Christopher Columbus so we could get the most out of it as we could. 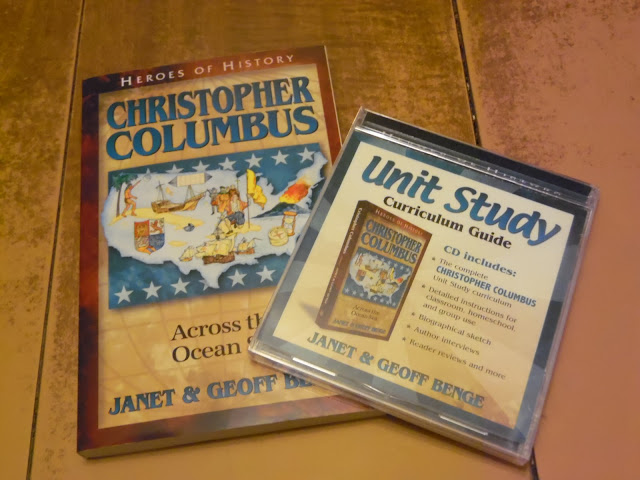 The book is a 190 page paperback book written in the narrative style. The reader will be treated to Christopher Columbus's story starting from when he was a child all the way through his adventures, concluding with his death. The authors cite nine different books in their bibliography from which they got their information to tell their tale. There is so much that I didn't know about his life, though in recent years I had heard a lot of negative things about him that we didn't learn growing up. Of course, if your schooling was anything like mine, you didn't learn much beyond the fact that Columbus sailed across the ocean in 1492 and discovered America.

I have to say, I was pleased that this book didn't shy away from the bad things that Christopher Columbus had done. It was an honest look at his life. At the same time, I was also happy that it didn't leave out the Christian aspect of his life, which so many modern books do.

The book begins toward the end of his life, with the chapter titled, "Marooned." Christopher and his two ships La Capitana and the Bermuda are badly damaged and he ends up having to beach the ships. This leaves the reader wondering what in the world happened, along with concern regarding what is going to happen to them marooned on the island. We have to wait until almost the end of the book to have our curiosity relieved. However, the adventure the authors treat us to makes waiting those 14 chapters well worth the wait.

Christopher grew up the son of a weaver in Genoa, Italy. However, he always longed to become a sailor, though it didn't appear that he would ever get that chance. As his story unfolds, we learn how the opportunity arises for him to go to sea and how he learns the skills necessary to become a seaman. On one of his first voyages, the convoy he is a part of is attacked by pirates and he ends up injured and eventually washed up on the shore of Lagos, Portugal.
While there, it becomes his dream to sail across the Atlantic Ocean (then called the Ocean Sea) to get to China. Others had been attempting to sail around the southern tip of Africa to get to China in an effort to more easily trade with the east following the Muslim Ottoman Turks' takeover of Constantinople. However, he can't get anyone to join with him in realizing the possibility of sailing west to go east. Not that they believed the world was flat, as some seem to think about the people of that time, they just couldn't justify spending the money on an unknown, seemingly impossible, dangerous journey. Though scholars understood the world was round, they figured it was way too long of a distance to travel. Christopher thought they were wrong, though we know they were actually a lot closer to being correct than he was. However, because of Christopher's persistence, he eventually is granted the 3 ships we know so well.

The reader goes with Christopher and his men on the uncertain adventure, though we know he is going to find land. We get to see the challenges he faces both before sighting land and during his time on the islands in the Caribbean sea (No Christopher Columbus did not discover North America, he discovered the islands near South America and a very small part of the South American continent).

We follow along as he meets both friendly and hostile "Indians," deals with mutiny and betrayal among his crew, along with sickness on land and danger in the water. Through all this, Christopher continues to discover new islands, claiming them for Spain, always thinking he is close to the mainland of Asia, while he is still a half a world away. In all, Christopher takes 4 voyages to the New World.

As you read the book, you can use the Study Guide to help you make the most of it. We received the guide as a CD which can be used on Windows or Macintosh. It is also available as a download. In fact, they are slowly phasing out the physical CD's to go to all downloads. The CD played easily on my computer, though when it first comes up it looks like a blank screen. All we had to do was press the "ESC" key and it brought up the window.

There are 7 tabs that appear when you open the program.
The Unit Study Guide contains:
This Unit Study Curriculum Guide helps the parent to connect many different subjects areas with the study of Christopher Columbus. Not only will History and Geography be focused upon, but such subjects as Creative Writing, Reading Comprehension, Public Speaking, Drama, and Art. As my children are on the young side for this curriculum, I didn't really get into too much with them. The two sections we used were the Key Quotes and the Chapter Questions.

I chose one of the nine memory passages for the girls and I to work on.

"We shall not cease from exploration And the end of all our exploring will be to arrive where we started and know the place for the first time. —Thomas Stearns Eliot "

After reading each chapter, I asked the girls 3 or 4 of the 6 questions, one of which was always to give the meaning to a vocabulary word, which we did by looking it up in the dictionary. We just discussed the answers to the questions orally, though for older children they could definitely be assigned the questions to work on independently.

There are some really neat ideas for a Display Corner, but we really don't have that kind of room in our house. I figured that was something that was more suited for a classroom as it requires students to be bringing in items to display.  The Student Explorations section seems to be meant for older children as well, seeing as there are essay questions and creative writing ideas. Even the hands-on projects are a bit beyond what I would expect of my children, plus, we didn't really have room for some of the suggestions. One of the craft suggestions was to make clay ships. As we had just done that for our Viking unit, I decided we would make the foil boats suggested in our core curriculum. We got to sail these across a tub ocean which was surrounded by construction paper land forms. One of the Social Studies ideas is to find specific places Columbus had been too on a map. We did spend some time on this, though we didn't find all of them.

There are a lot of ideas given, though the parent/teacher is to plan out how to best organize the lessons. I have to say, we are definitely going to have to come back to this unit study in the future, because there is so much that the children can learn. I could actually see this being a great class for a homeschool co-op, a nice little study on Christopher Columbus.

I thoroughly enjoyed reading Christopher Columbus: Across the Ocean Sea. I found all the details of Columbus's life to be very fascinating, though there are times I wonder why he is considered a hero. Yes, he was persistent and desired to spread Christianity and find a way to the Indies; however, it is also true that he is guilty of capturing Indians and enslaving them, though at that time, this appears to have been an acceptable way of doing things. There are quite a few instances of Indians being captured and made slaves, along with instances of fighting between the Indians and the Spaniards. Reading the book made me wonder why the peoples of Europe thought they could just come to a new land and claim it for themselves. I mean, if the lands had been unoccupied, that would have been one thing, but they are taking the land from those who already live there.

I appreciate that the authors did not shy away from telling the truth of what Christopher Columbus did to the natives. It does appear that he wasn't always at fault and was doing what he thought was best. Though I love the idea that Columbus was wanted to spread Christianity, my eyes were opened to the fact that 500 years ago, and under the Catholic Church, that looked quite different than how Christianity was meant to be spread.

The Unit Study Guide is a wealth of information and ideas for turning the reading of this book into a great Unit Study. There is so much there that is can almost be overwhelming as you sift through to see what you would like to use.

Though I started reading the book to the girls, I noticed that they began to zone out a bit and weren't very enthusiastic about having it read to them. There is a lot of information contained in the books. There also isn't a lot of dialogue, it is a straight telling of what was going on, which seems to have gone over their heads at times. This is another reason I plan on trying this out again in the future. I think the girls will get a lot more out of it. Mind you, this isn't anything against the book, as it is recommended for 10 and up. I am very glad I got a chance to read it though, as I was able to have the information on hand to share with the children as we learned about Columbus.

YWAM Publishing offers many more biographies that my Crew Mates and I were able to choose from. Not only do they have the Heroes of History books, but they also offer Christian Heroes: Then & Now. Don't forget to click on the banner below to see what other exciting historical figures the Crew has been able to read about.